Have you seen the Apple Watch's "Us" ad? The one-minute spot presents several vignettes of humans interacting from afar by way of wrist, from sending tiny sketches to checking various chat notifications. It's a technically accurate, if wholly idyllic, take on the experience: You, too, can show off your cursive skills to a partner — or send them haptic proof that you're still among the living.

Messaging is a huge component of the Apple Watch — so much so that it dedicated a hardware button for quickly communicating with your closest friends. But how much of that is novelty and how much is actually valuable? To that end, I convinced my significant other, a pair of Apple Watches in tow, to see if we could move all our digital communication (or at least all our phone-based chatting) to the Watch. After a few weeks of frustration and experimentation, here's what we concluded.

You won’t just send and receive messages, calls, and mail more easily and efficiently. You’ll express yourself in new, fun, and more personal ways. With Apple Watch, every exchange is less about reading words on a screen and more about making a genuine connection. — Apple Watch promo pageThink about changing chat clients for a second. Sure, it’s irksome to move from Google Hangouts to WhatsApp, for example, but it’s also relatively straightforward. There's an account signup process and maybe some new stickers, but you're still pulling out your phone and thumbing on a virtual keyboard. The Apple Watch doesn’t have an on-screen keyboard, so the first challenge was figuring out how to translate everyday chat to the wrist. 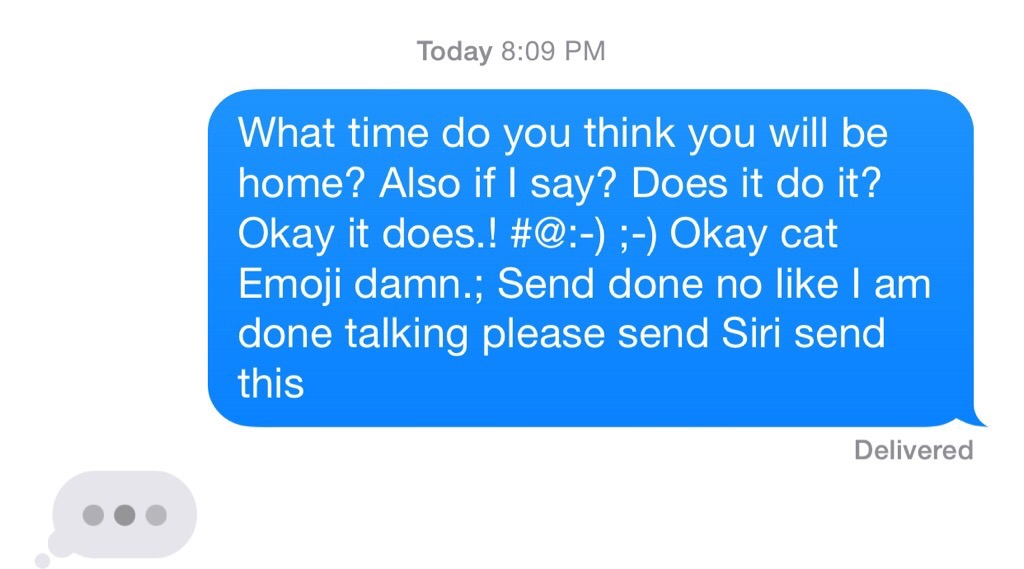 Voice dictation works the same as it does on the iPhone, but to be honest, I’ve never had to use it until now. It’s surprisingly effective but socially awkward — if you want punctuation, you're gonna have to say it aloud. Alternatively, you can choose to send the audio blip over instead, which will be played through the Watch’s speaker. (So do be mindful of your surroundings!) 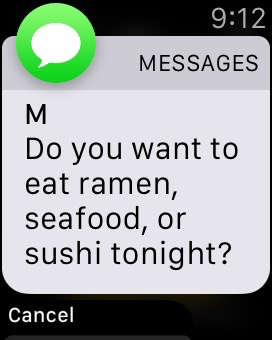 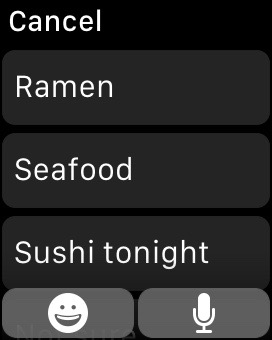 Apple has touted the way the Watch suggests responses based on the message, but the only one we’ve ever seen is when you’re asked to pick one from a list, and the logic is pretty rudimentary. You can customize preset responses from the iPhone’s Watch app, but there’s a good bit of effort involved in doing so. Also, it’s depressing to think we could probably create six phrases that’d cover most of our conversations.

None of that really changes the messaging dynamic or is really any more efficient than pulling out your phone, but emojis, I honestly thought, might be the holy grail here. At last, we've reached a point in linguistics where hieroglyphics could make an even more aggressive return:

Unfortunately, Apple's Watch only lets you send one emoji at a time, which severely limits this mode of communication. Apple has also supplied three "groups" of animated emoji (smiley face, hand gesture, and heart), but they legitimately scare me. One time I was cleaning the screen with the smiley on and it turned anger-red. That's not a joke, but I was never been able to recreate it and now actively avoid it at all costs.

Third-party apps, meanwhile, provide the same experience but lack a hardware button for ease of use. I almost recommended Yo because of its ability to share your location, but it turns out you can do that by going through Apple Watch’s official Messages app (versus using the hardware button shortcut), and I only found that out by scouring through Apple’s 96-page user guide (it’s on page 42). 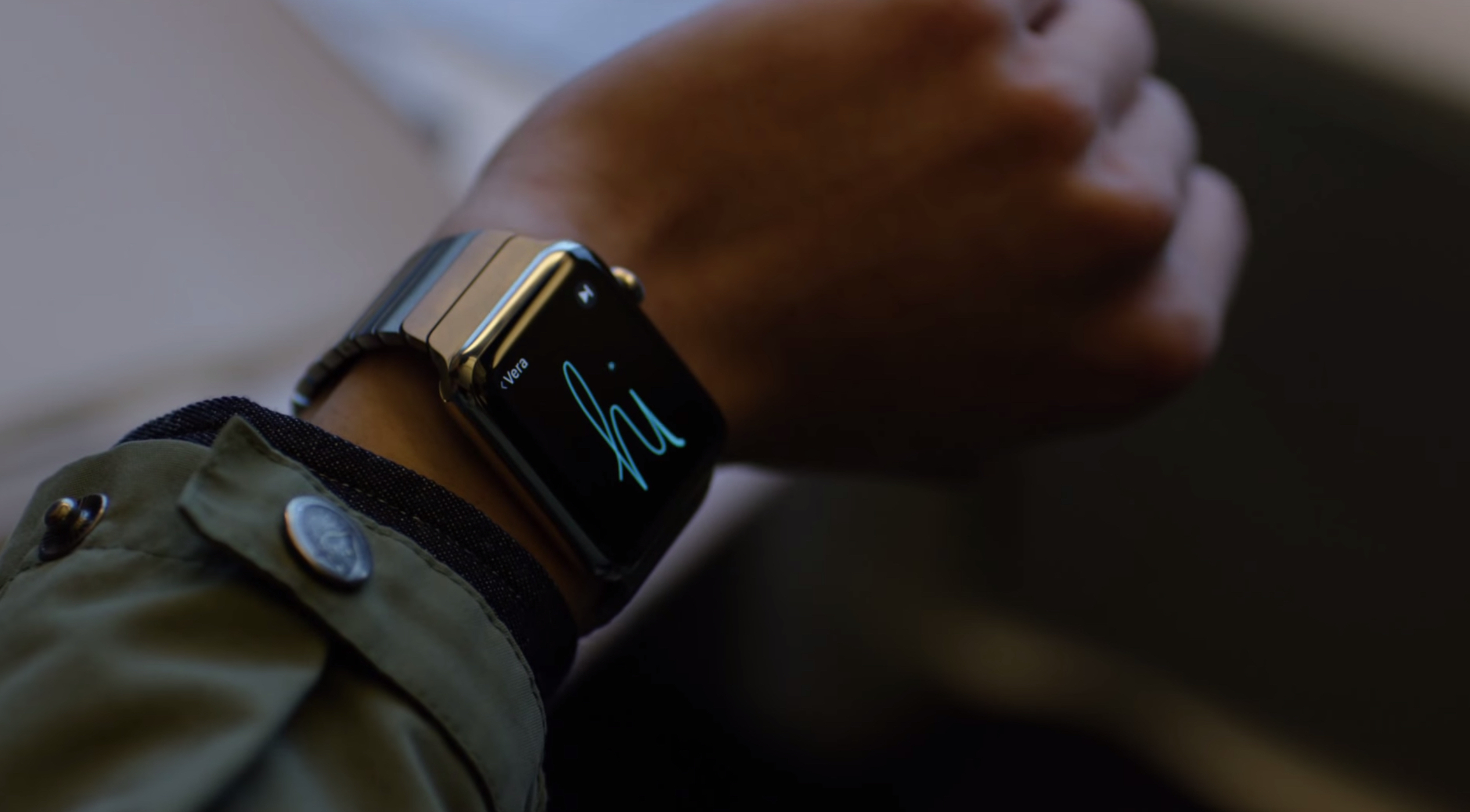 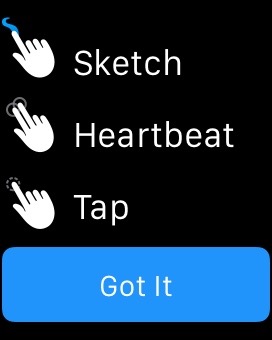 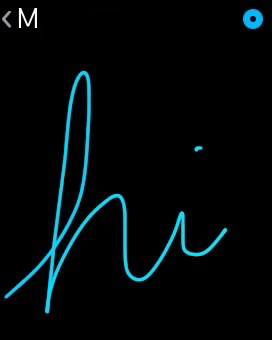 So far, everything we've talked about is generally faster and easier to do on your phone. I don't want to be unfair — the Apple Watch is made to complement, not replace, the iPhone — but since messaging is presented as a selling point, what is better on the Watch?

Let's talk about Digital Touch, which is unique to the Watch. It's Apple's all-encompassing word for taps, sketches, and heartbeats. Sketches has proven just how bad I am at calligraphy. I seriously don't know how any human could've written such a nice "hi" in that commercial. I tried for days, and even went so far as to lay the Watch down and use a stylus. That ... actually worked pretty well. Most of the time it looked more like a squiggly mess. Which is fine, because Digital Touch is ephemeral; you send it once, you see it once, and then it's gone for good.

Heartbeats can be sent from the Digital Touch screen by placing two fingers on the Watch, which will in turn tap your wrist to indicate the speed. The longer you hold, the more heartbeats you'll send. There's been some debate inside The Verge's office whether the heartbeat is accurate or if it's just an approximation. My partner swears she can tell the difference between the heartbeats I send her; I can really only tell the difference between "generally alive" and "just got off a treadmill."

Tapping is what happens when you put one finger on the screen, or you try to send your heartbeat but your two fingers don't land at the same time (this happens about half the time for me). However you tap the screen, however many times, in whatever rhythm, will be felt as "taps" for the other user.

It really wasn't until we had given up on actively trying to use the Watch for communicating that its messaging functions started to make sense. I'd check my wrist, probably to an obnoxious extent, but it was still better than pulling out my phone or leaving it on the table during meals. Carrying laundry down the street, I resolved one time — ONE TIME — to use Siri dictation because my hands were full. I'm learning to do an incredible dick butt sketch; it serves no purpose but I'm proud.

More than anything else, however, our communication comes back to Digital Touches like the heartbeat — the aspect of the Watch that doesn't try to imitate traditional chatting. Sometimes it's in the middle of a long screening, or a lapse at work. Before the Watch, we would often send each other random messages with the subtext "just letting you know I'm still alive." We all do send those kinds of messages. My partner and I don't do that as much anymore, though. The non-textual heartbeat is enough.

That isn't worth the cost of entry, sure, but it is the one part of the Watch that feels like it's trying something new.