Share All sharing options for: NASA astronaut records stunning view as he flies across the night sky 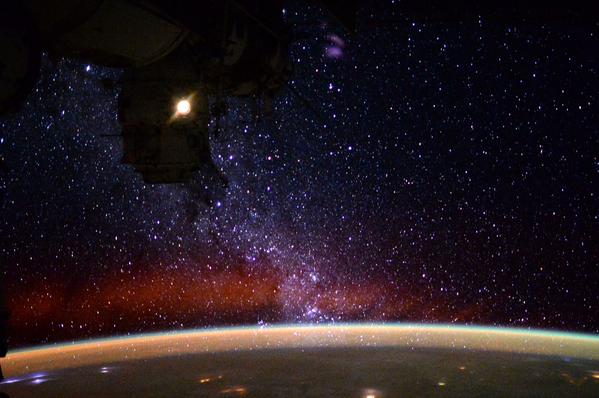 Astronauts aboard the International Space Station don't need to flick on the TV to help them fall asleep at night. They can just look out the window. This weekend, Commander Terry Virts, who's been aboard the station since November, gave us Earthbound folk a look at just what we're missing. A video posted to his Twitter account shows the absolutely surreal view from aboard ISS as it hurtles around the Earth at roughly 17,000 mph. As the stars slip below the horizon, they meet the rapidly-moving lights from the surface. It's utterly stupendous.

No words to add to this night view. pic.twitter.com/mZUSv9RvVP

Commander Virts and his Expedition 43 crew welcomed astronauts Scott Kelly and Mikhail Kornienko aboard ISS back in late March, when the two began their record-breaking, year-long trip in space.

Virts would have missed the view had things gone to plan. He and his crew were set to return on May 13th, but that was delayed to June after an unmanned Russian resupply mission failed and crashed into the Pacific Ocean earlier this month. Virts didn't seem disappointed at all about the news, saying in a tweet, "I [am] very glad to stay!" And who can blame him with those kinds of views? Be sure to check his Twitter timeline for more incredible shots, like the one below of an aurora over Australia.

I wish I’d been two minutes quicker with the camera. We were right above this and surrounded by green! #spa... https://t.co/vmRapt3f9B