It's no secret that Google+ failed to catch on like Google wanted it to. Despite efforts to shoehorn it into other parts of Google — though mainly the dark realm of YouTube comments — people are still flocking to Facebook to stay in touch with friends, and to be entertained with a non-stop barrage of news stories, videos, and photos. Yet while Facebook boasts that it's the place where the most people are sharing photos on the entire internet, there's little arguing that it's one of the worst for organizing them. Facebook's done a ton of work to overhaul how it stores photos, but very little in the way of letting you find the one you're looking for in a sea of snapshots.

These things, combined with the general sluggishness among other big photo services, made Google+'s photo service so exciting. It turned out to be a great product with powerful features that would turn busts of photos and related videos into surprisingly-polished things you actually wanted to share with other people. The only problem is that it lived inside of Google+, where your friends might not be.

That's changing today with Google Photos, a brand new service that's the spiritual successor to the photo tools in Google+, but that lives on its own. It's fast, smart, and principally designed to try and help people deal with the oppressive problem that is dealing with the piles of photos they're shooting on their phones. I've just spent the past few minutes playing with it here at I/O, and do not want to leave the building without it. Luckily for me, and soon you — that won't be a problem.

The first thing you notice about Photos is how fast it is. Even over some very questionable conference Wi-Fi, thumbnails popped up quickly and the full image streams in just a second or two later. I'm told that it's quite a bit speedier when you're on a solid Wi-Fi connection. This has kind of become the standard of any photo service, but it's more impressive when you keep pinching out to see your entire library and it's all just there. Search was equally snappy. I was able to search for shots by location, and the results popped up faster than I thought they would. All in all, a very nice first impression. 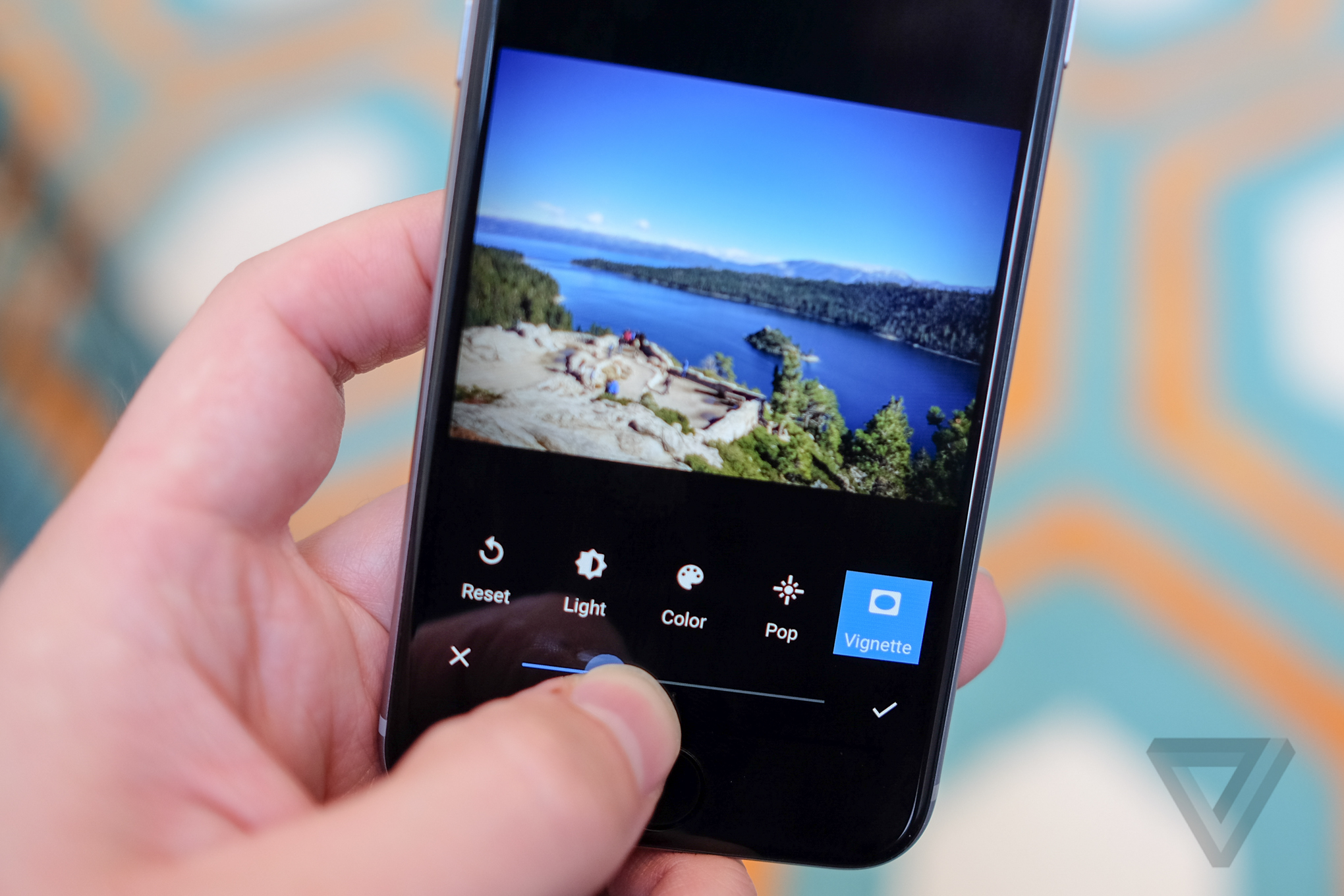 The editing features, which is where I tend to spend a lot of time making tweaks in places like VSCO Cam, are highly simplified. Adjustments can be made either with a filter, or with sliders. On a small screen, that's about as much fiddling as you want to do, and there's not much more to it than that. The message seems to be that the auto-enhance button should do most of the job, and if you need much else, you should go edit that photo in another app.

I only used it on a Nexus 6 and iPhone 6, so I'm not able to stack up how the experience compares with the web version or on tablets. But my guess is that most people will be pawing through their shots on phones. In that regard, Google's added a few nice things here to help you sort through it all with search. You can see your photos sorted just by people and places, or by "things." That last one is one of the most impressive, since it's identifying what's in your photos — or at least trying to. The lead image in a test album with 16 photos of "cars" showed up with a stack of eight boxes of Oreo cookies. There were no cars to be seen. Others in the group nailed it, or were comedically off. But this is absolutely the kind of feature you want with a growing library. Google's given us several ways to deal with an ungainly number of shots, and it's all very straightforward.

Dump everything into Google

The big bold idea from Google here is that you should just dump every possible thing into its servers, and access it about the same way from every device. Between the new Flickr and now this, paying for storage as we know it is dead, and with it the need to worry about how much room you have on the device you're on. Using it with just the small collection of photos I've stored with Google thus far, that vision holds up pretty well. But the real test is dumping in your thousands, or even hundreds of thousands of shots, something I wasn't able to try just yet, but plan on doing now that it's arrived on both the iOS App Store and Google Play. 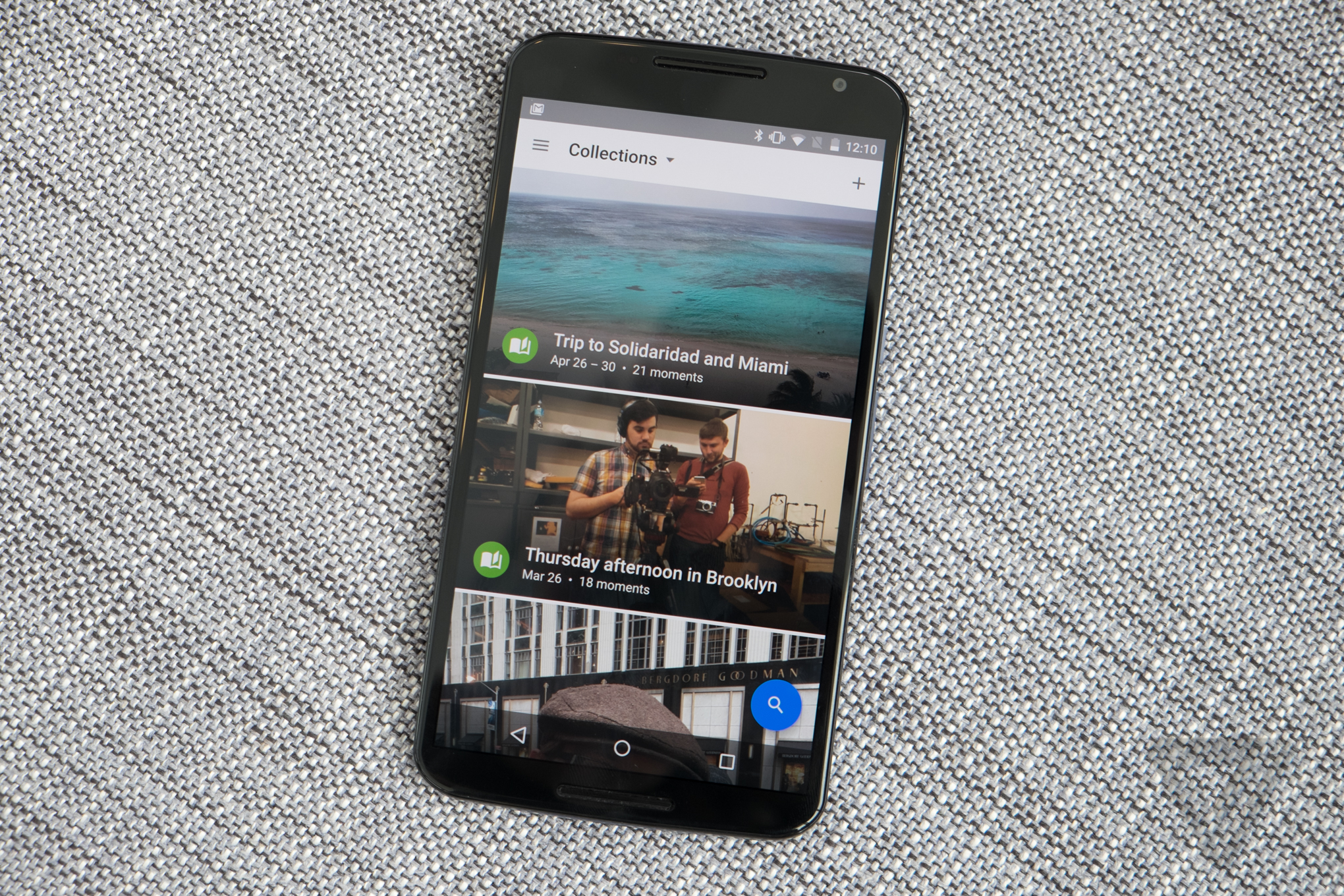