Via Rolling Stone, Yahoo Sports, and The Hollywood Reporter

The boxing world is trying to keep the past alive, but the rest of us are living in the year 2015. That was evident last night, as two aged boxers at the end of their careers entered the ring at the MGM Grand for the most-hyped fight in well over a decade. The calendar read May 2nd, 2015, but the Mayweather-Pacquiao fight was hidden beneath an outrageous and antiquated $100 Pay-Per-View paywall. It was not officially available online in any form.

Officially being the key word. As Pay-Per-View orders started to fail last night — nearly every operator from Time Warner Cable and Charter to DirecTV saw significant outages — the illegal Periscope and Meerkat streams started popping up. At any one moment, thousands were tuned into each separate stream, whether it was from someone's apartment in Barcelona or a house party in Indianapolis. If you wanted, you could even get a ring-side view thanks to an attendee who streamed live from a pricey seat in the arena.

@johnlegend My apologies Mr. Legend, I can certainly look into this for you. Can you please DM me your account info? ^FG

The quality was bad, but Periscope is easy and free

Of course, the quality was piss-poor no matter which stream you tuned to, and you could barely hear the bout over the cheering of the fans at whatever party you were virtually crashing. But for many, it was probably just what they were looking for — it was a way to be a part of the event without spending a ludicrous amount of money or going through the hassle of trying to set up a VPN to watch a stream from outside the US.

And all of this came with HBO and Showtime doing their very best to squash any illegal outlets for the match. Earlier this week, the two networks sued at least a couple of sites that planned to have illegal streams. The sites disappeared shortly afterwards. And watchdogs, paid by the promoters, were on the prowl for bars illegally showing the fight without paying thousands for a commercial license. 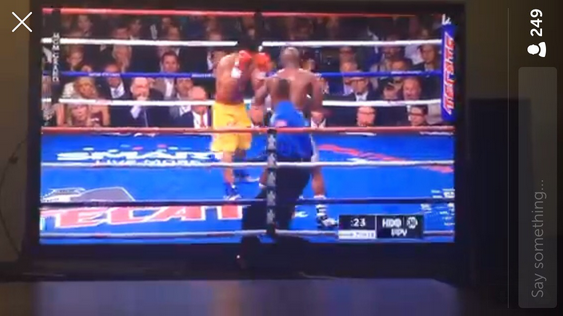 But there was apparently no way to stop Periscope users, who could simply open the app and start broadcasting to thousands without warning. (Periscope and Meerkat rely on users to report copyright-infringing material.) HBO did not immediately respond to requests for comment, and Showtime declined to discuss the use of streaming services. Nevertheless, they are certainly aware of what Periscope can do. Just last month, HBO aired its complaints about the streaming service, calling it a possible outlet for "mass copyright infringement."

All of that said, the Mayweather-Pacquiao fight will still prove to be an enormous cash cow. The final numbers aren't in, but the fight was the biggest ever, economically, with a roughly $300 million purse. All-in, some estimate the event could generate a billion dollars. With money like that flying around, maybe it's no wonder that boxing is so stubborn in its ways.

"Members of the Periscope team were hard at work on Saturday working to disable streams that featured broadcasts of the fight," a Periscope spokeswoman told The Verge in an email. "We received 66 DMCA reports from rights holders, [and] we were able to take action against 30. The outstanding streams had already ended and were no longer available. We took action in response to takedown requests within minutes." She added that the company complies with the Digital Millennium Copyright Act and is "working to ensure there are tools in place so we can react expeditiously."

Update, 12:06 p.m.: This article has been updated to include comment from Periscope.