Microsoft turning phones into PCs feels like the future

Microsoft turning phones into PCs feels like the future

One of Microsoft’s big announcements at its Build developers conference last week was the ability to turn a smartphone running Windows 10 into a PC. Dubbed Continuum for Phones, it’s designed to take advantage of new universal apps that run across Windows 10 on phones, PCs, tablets, and the Xbox One. If you’re running a mobile version of Excel on your phone it will magically resize and transform into a keyboard- and mouse-friendly version for use on a bigger screen. It feels like the future.

Continuum for Phones works wirelessly or through a wired dock

While Microsoft simply showed a mocked-up simulation on stage at Build, in a separate session the company provided a full demonstration of Continuum for Phones, along with more information about the feature. It works by connecting up to a wired dock or using Miracast wirelessly. Microsoft is even supporting wireless dongles where you use the phone as a controller with a software touchpad and keyboard.

The phone interface scales up to a large display or TV, and the Start Menu takes the same Tiles found on the phone to provide access to apps. While it looks like the Windows 10 desktop, there are some subtle differences, and traditional desktop apps won’t run here. In a way, it feels like the natural successor to Windows RT, but one that’s actually useful if developers create the universal apps required to really take advantage of it. 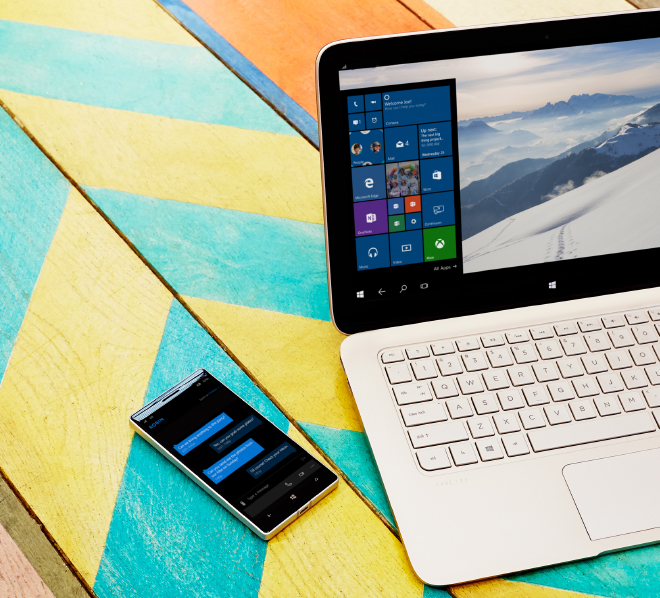 Microsoft’s demo seemed solid, even with a few glitches here and there, thanks to the early nature of the software. The company’s own apps all reflowed as you’d expect to take advantage of the big screen. There are also ways for developers and apps to take advantage of the additional screen as a second one, allowing you to stream a movie to a display while you continue to read email from the phone.

Transforming phones into PCs could be popular in emerging markets

Microsoft is really aiming this at emerging markets where a phone is the primary computing device, and that’s one area where this type of feature could become popular. But it’s not the only company to attempt turning a phone into a PC. Canonical is doing similar things with USB-connected keyboards for its Ubuntu phone OS, and Motorola tried to sell an expensive docking to turn its Atrix phone into an Android PC. Other solutions, including the REDFLY, haven’t really taken off because of a lack of apps and wider support. Microsoft’s implementation could be equally limited thanks to the small market of Windows phones, but the other solutions didn't have the backing of a giant software company or a thoughtful natural interface. Microsoft's solution feels like the best so far.

There’s clearly hurdles to over come, but Microsoft has broad ambitions for Continuum. "We actually envision a world where the phone powers many more screens and experiences, where every screen can become a PC," says Keri Moran, a Windows program manager at Microsoft. That could involve laptops that have a keyboard and screen, but no storage or processors inside, as an external phone will do all the legwork. The same applies to tablets, where you have a super-thin device with just a display and battery, all powered by a phone. If Microsoft can convince developers to build universal Windows apps, and consumers to buy Windows-powered phones, then this definitely feels like the future.