In the three-odd months since I last reviewed an Android Wear smartwatch, the platform has actually grown on me. A big reason is that Google has shipped a new version of the software that isn’t so dogmatic about making you bark commands at the watch anymore. Another reason is the incremental improvement in the available third-party apps and watch face ecosystem.

Pardon the pun: Android Wear has actually “grown on me” because the watch I’m using it on is literally huge: the LG Watch Urbane. It’s the first (and currently) only watch using the latest version of Android Wear. It’s also a cipher for understanding Android Wear’s past, present, and future. A big, gaudy, $349 cipher. 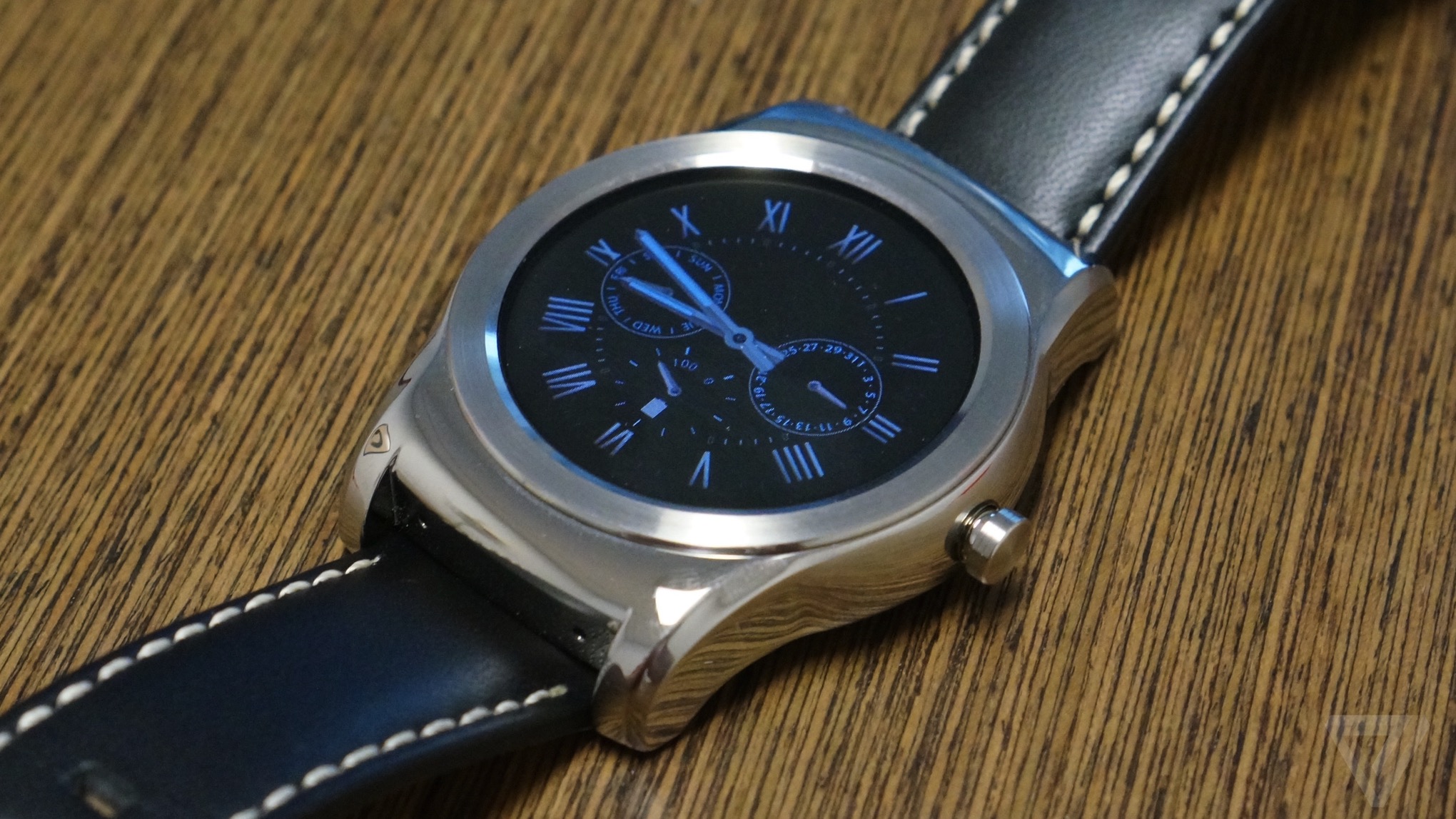 They say there’s no accounting for taste, but I tried anyway: asking both nerds and normals what they thought of the looks of the LG Watch Urbane. I asked about the round face, the stitched-leather band, the glossy metal, and of course the size. Everybody scrunched up their noses and said it wasn’t for them or, frankly, had more extreme reactions. The consensus is that this is a cheap-looking watch trying to pretend that it’s an expensive watch. It’s not fake-Rolex levels of low-brow ostentation, but it’s in the ballpark.

This is the whole point of the Android Wear platform: same software, different watches

But my colleague Chris Ziegler strongly disagrees, and although I deeply enjoy teasing him for his taste, I actually do think he might have a point. There is some kind of aesthetic ethos here, and even if I don’t like it, I am actually happy it exists. Too many Android Wear watches have been forgettably basic in their design, almost as though they’re apologizing for their very existence. The Urbane is not sorry. That might appeal to you, and if it does, I heartily salute you. This is the whole point of the Android Wear platform: same software, different watches.

You can’t measure aesthetics, but you absolutely can measure size, and let me just be incredibly clear: the Urbane is big. It’s the largest watch I can wear comfortably on my relatively small wrists. It’s 52mm tall and almost 11mm thick. Unless you’re sure that you like big watches, you can trust that this one is too big.

The Urbane has a 1.3-inch plastic OLED screen. It’s sharp and always on. In fact, because Android Wear is finally starting to get some pretty solid third-party watch faces, the ambient mode screen can be as info-packed as the active state screen now. Inside, the basic specs of the processor and storage are not really notable, but the battery is at 410mAh. What that means is that even with the screen on all the time, I’m getting a full day of battery life and then some. It’s not the two-to-three days that I personally believe should be the minimum for a smartwatch, but it’s better than most of the competition, Apple Watch included.

I do have one big gripe about the technology, though: there’s no ambient light sensor. Even if you set the brightness to the minimum, it’s a garishly bright screen. To deal with that, you can double-press the button to go into "theater mode," which turns the screen completely off unless you press it again. But a watch, even more than a smartphone, ought to be accommodating to the world around it. 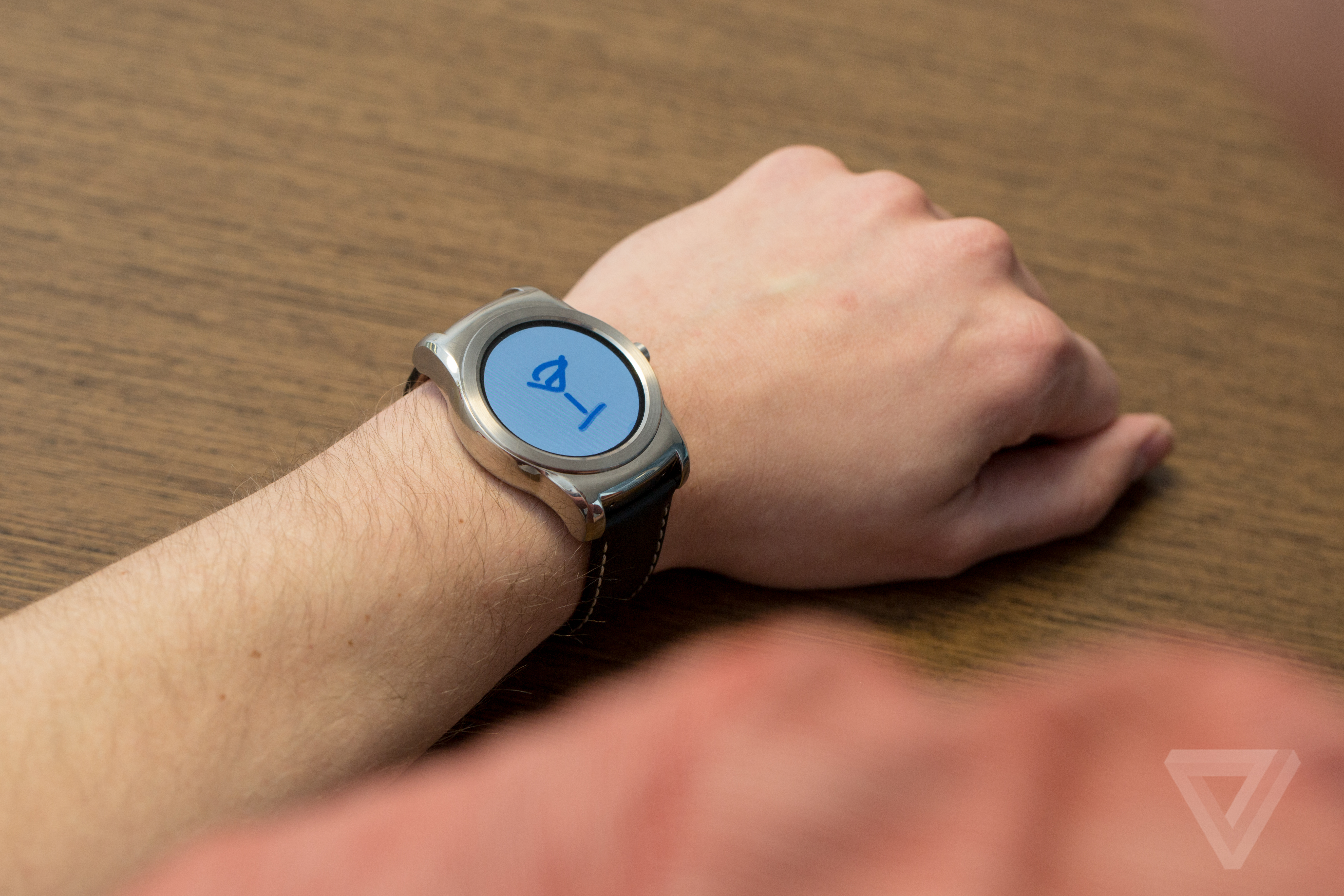 More than anything else, though, the story of the Urbane is Android Wear 5.1. Google says this update is coming to other watches, but for now it’s only available here. Wear isn’t radically changed in 5.1, but there are enough changes to make it feel like it’s moving in the right direction. I’m tempted to say it’s a direct reaction to the Apple Watch, and in many ways it is.

Android Wear used to aggressively encourage you to talk to it. Yes, it served notifications and showed you Google Now cards, but everything else was voice-driven. It ran (and runs) apps natively and knows about your contacts, but in previous versions all that was hidden under layers of menus and abstractions. Wear wanted you to tell it you were going for a run, not look for the Runtastic app. 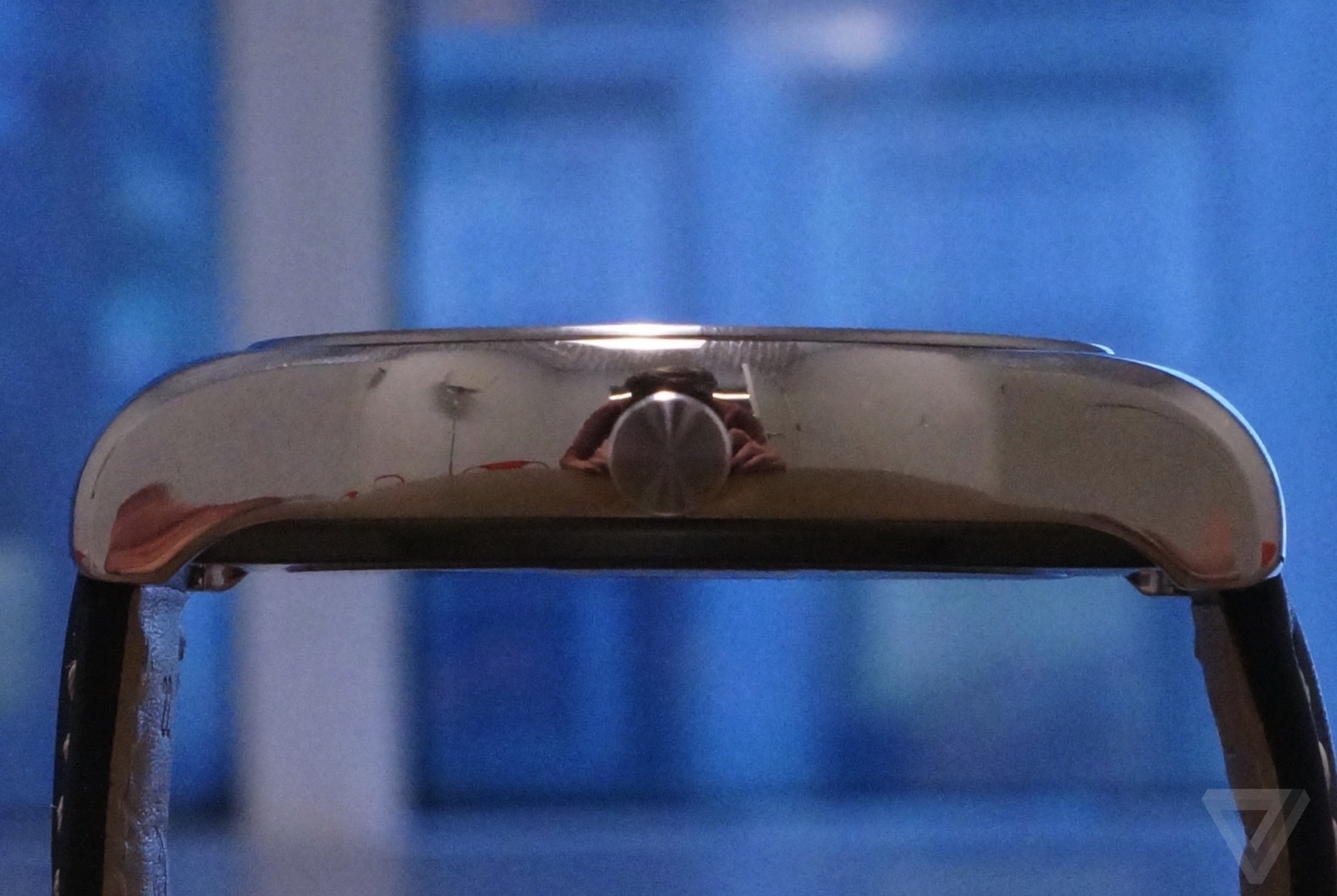 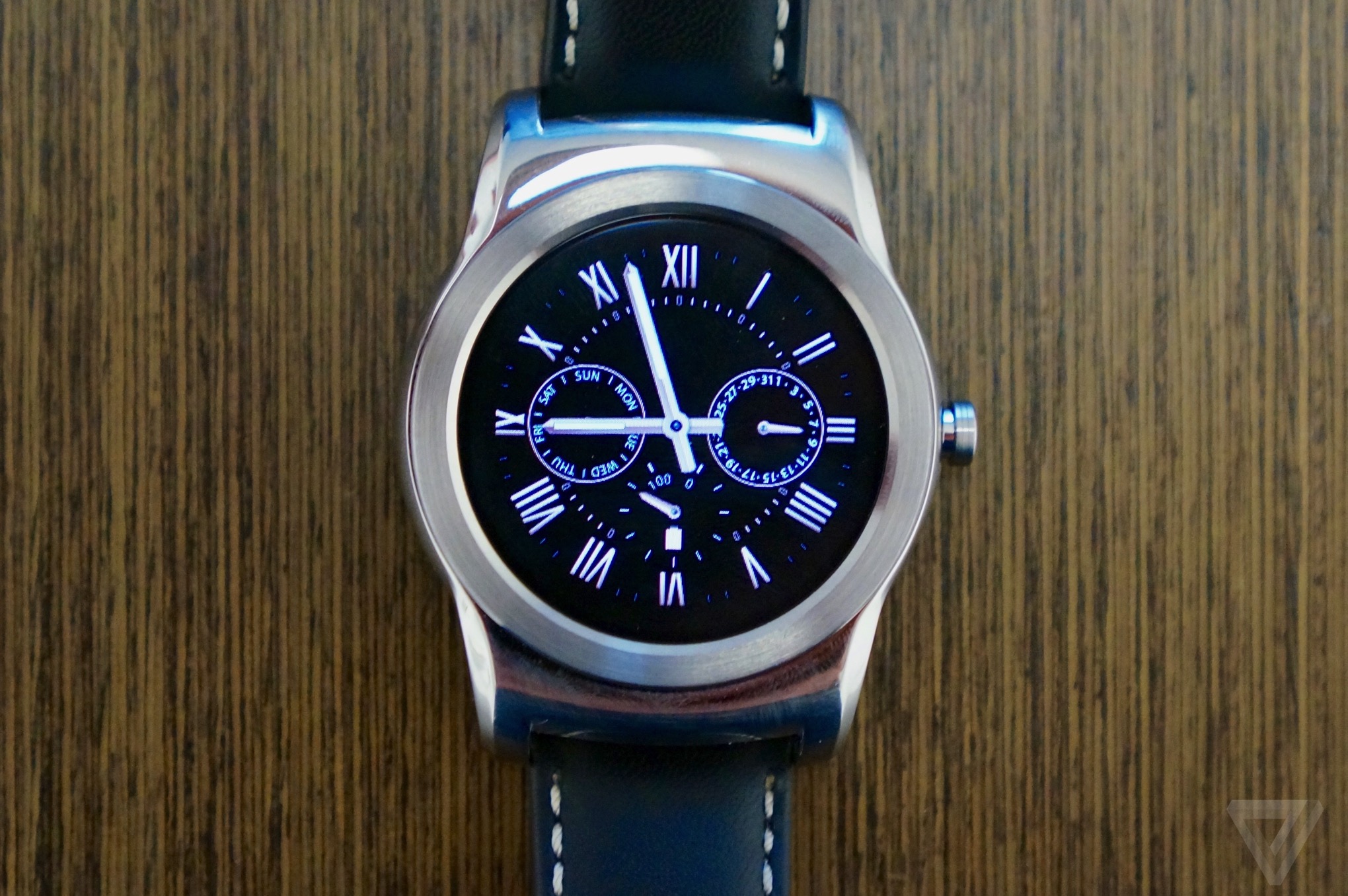 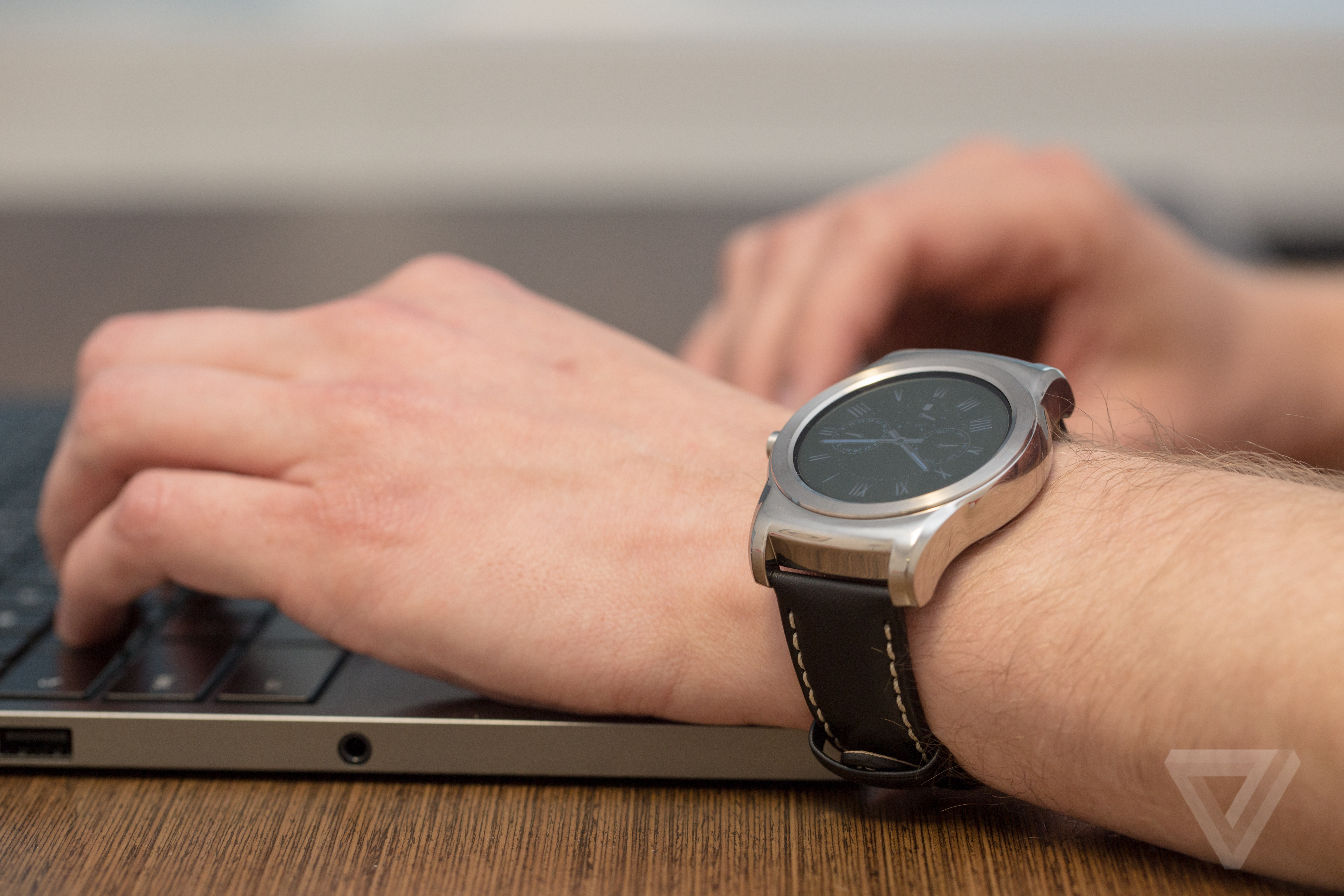 But luckily — and maybe because it saw Apple just doing this — Google has pulled out those abstractions and will now just show you your apps and contacts. A single tap on the watch screen takes you to a vertical list of apps, with the most-recently used up at the top. A swipe from there takes you to your contacts, which consists of your favorites and most recents. Because this is a Google product, though, the contacts will have dupes even if you’re rigorous about merging them on your phone. A third swipe gets you to the screen that helps you know what voice prompts work. Overall, the system is easier to understand even though it might be less ambitious. It’s better.

Then there are some features that seem deeply nerdy but are actually quite useful. Like the Apple Watch, Android Wear can now switch over to Wi-Fi when it can’t get a Bluetooth connection. Theoretically, it knows all the Wi-Fi networks your phone does, though in practice I had to re-enter a couple manually (using the phone). Once it’s set up though, it does something the Apple Watch can’t: it will work over any Wi-Fi network, not just the one your phone is on. It does so by utilizing Google’s cloud services, all the communication between your phone (which needs to be on) and the watch happens over the internet, and it works great.

Google is also letting apps run on the ambient screen, so you don’t have to re-open them constantly. Right now the only app that does it is Google Keep, but Google says Maps will support it as soon as a new version of Wear comes out, possibly as soon as next week. Good thing, too, because I experienced some crashes and freezes that will hopefully be quashed with the update.

You can also flick your wrist to scroll through your notifications. It's a little tricky to get right without a little bit of practice. Even when you master it, well, you will look kind of dumb twisting your arm over and over. But it's useful to have in a pinch when you need it.

Finally, you can send emoji, actual emoji, by drawing them on the screen. You can send them via text, email, or as a reply in any app that supports Android’s reply-in-notification feature. It actually works pretty well: you sketch the thing you’re hoping for and then Wear presents you with a list of emoji it thinks matches your squiggly lines. 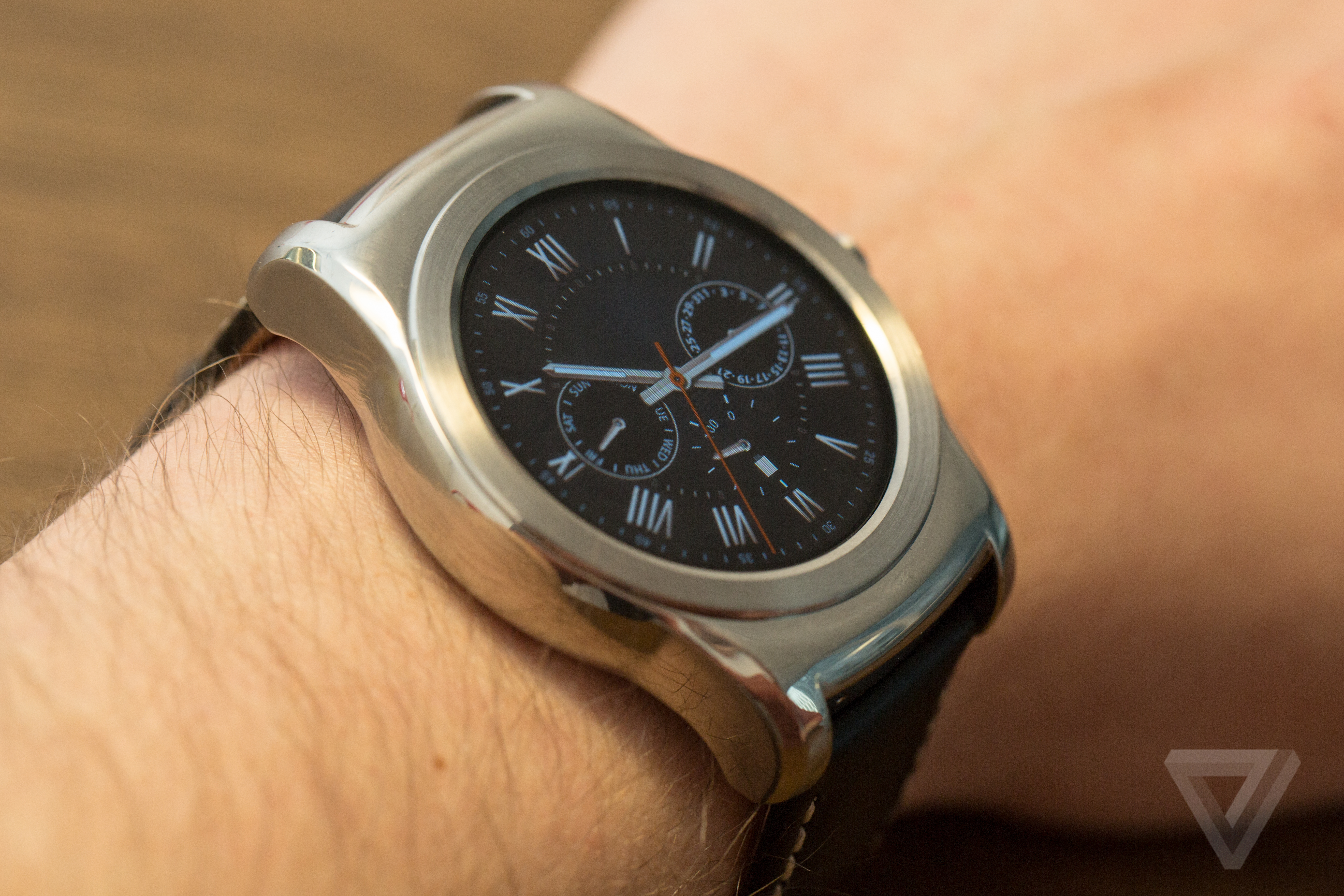 Those are the big updates to Wear, and they make it feel like a well-rounded smartwatch platform. I don’t want to get too deep into comparing it to the Apple Watch platform here, though I will say that there’s no obvious winner between the two. Apple’s Watch seems much better at tracking health data than any Android Watch, but Android’s notifications seem much better and more coherent than Apple’s. At this point the comparison is academic: neither smartwatch will work with the competitor’s phone. I’ve reported that Google is close to submitting Android Wear to Apple for compatibility with the iPhone, and if that happens things will be really interesting.

It's not the smartwatch for me

But let’s get back to the Urbane. I wish I could say that the Urbane is the perfect Android Wear watch, but I can’t. It may be that there is no such thing, there are only different watches for different people. That’s why I called the Urbane a cipher for Android Wear: it perfectly encapsulates how divisive wearable technology can be. I’m also hard-pressed to believe that it’s worth the $349 asking price — the materials and technology aren’t that much better than the G Watch R, which is $100 less. The Urbane is for people who love big, shiny watches, and I’m clearly not one of them.

Some photography (the good shots!) by Sean O'Kane