Leica cameras have often required significant compromises. The flagship M line has a staggeringly high price point and doesn't have any modern photographic conveniences, like autofocus, autoexposure, or Wi-Fi connectivity. Leica's other cameras also have high price tags, but are way behind in terms of ergonomics or image quality. Still, Leica devotees are passionate and many wouldn't use any other camera. (They also tend to be very deep pocketed.)

Now Leica is giving them a camera that doesn't compromise on either modern capabilities, image quality, or the handling and shooting experience that's associated with classic Leica cameras. The new Leica Q is a fixed-lens compact camera with a full-frame, 24-megapixel CMOS image sensor. It's a lot like Sony's RX1, but newer, and more updated. And with a Leica badge in place of a Sony logo, of course. It also has a Leica-appropriate price tag of $4,250 and is available worldwide starting today. 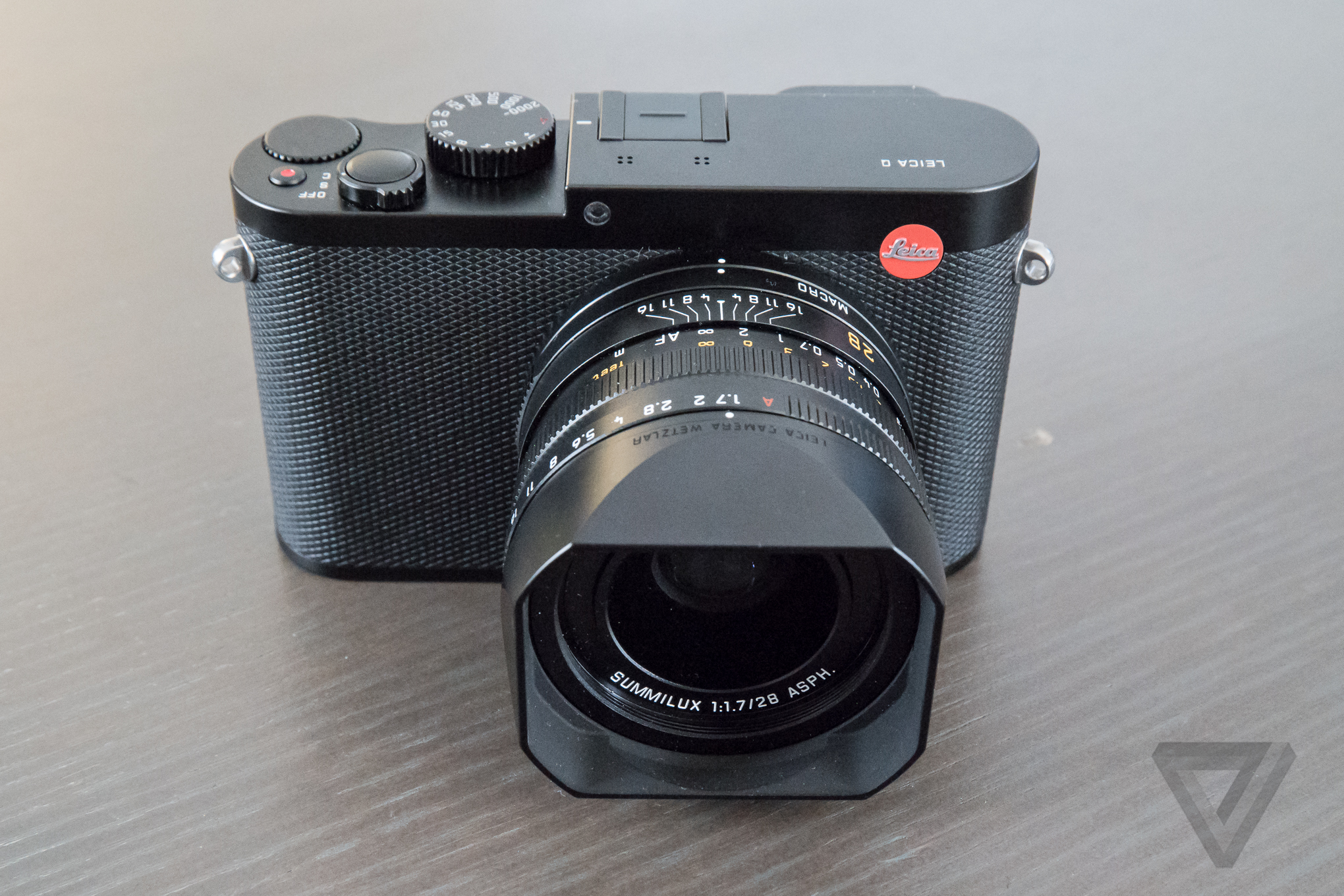 The Q's design is much more classic than the futuristic, ultra-modern look of the Leica T. It's pretty much what a person would draw if you asked them to sketch a camera, and it's right in line with the retro aesthetic of Leica's M line. Instead of being machined from a single piece of aluminum, like the T, the Q is made up of different pieces of magnesium and aluminum. It was designed in-house, unlike the T that was designed by Audi. 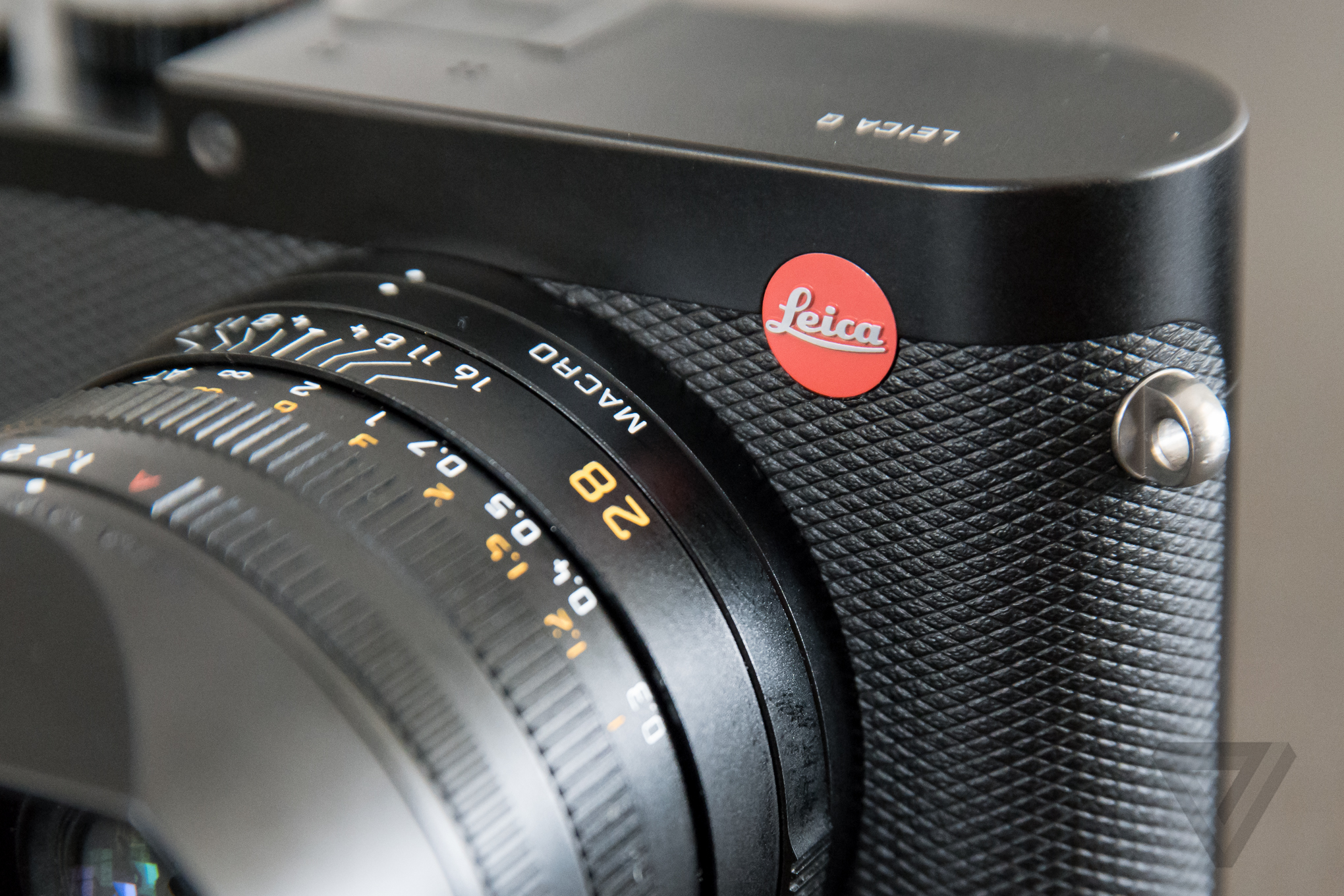 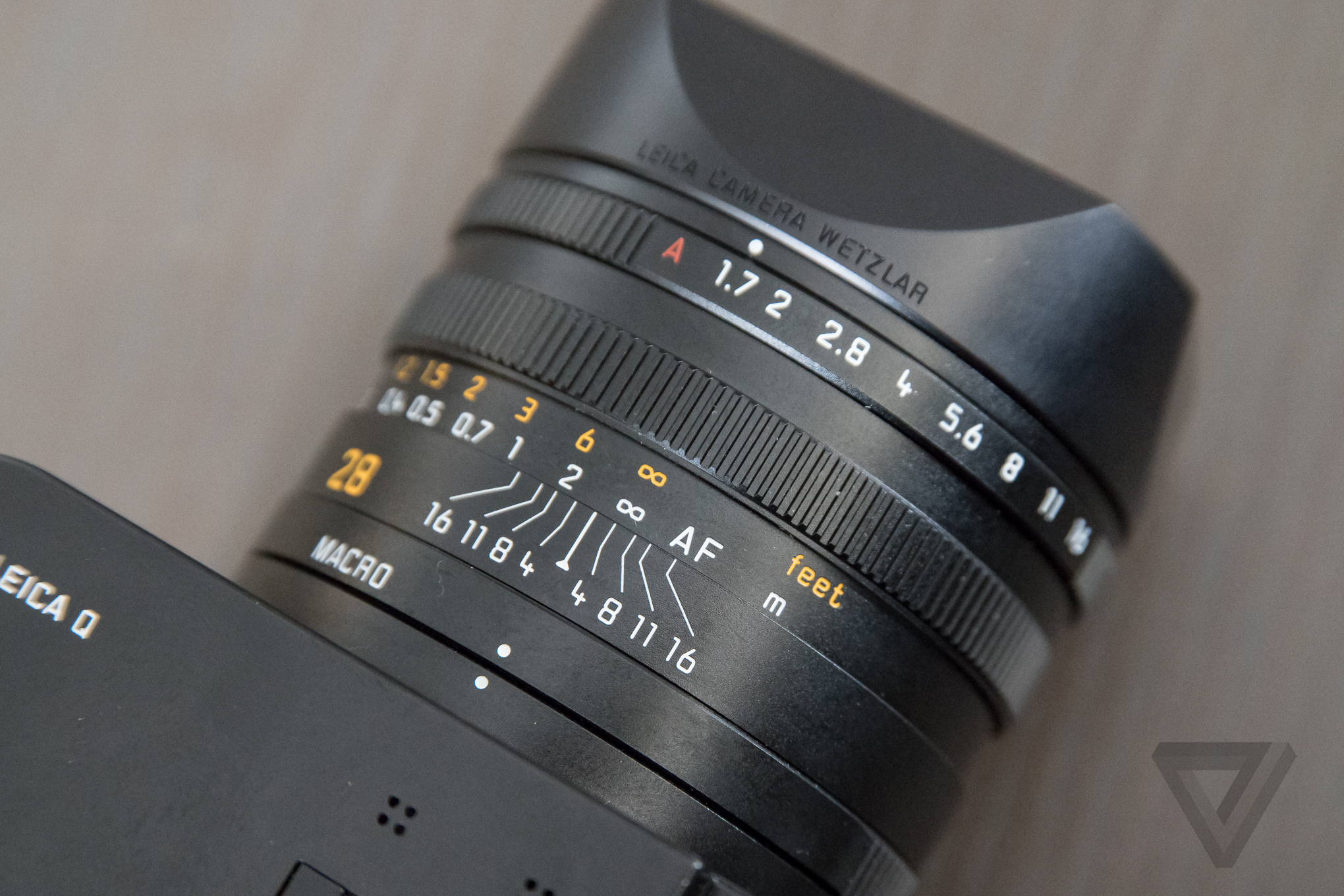 The lens on the Leica Q is a photographer's dream. It's a 28mm, f/1.7 aperture Summilux with optical image stabilization. All of the Leica Q's lens controls are on the lens itself, much like the M series, making it easy to adjust aperture, focus, or focusing modes on the fly. Leica says that it designed the lens specifically for this camera and it has the exceptional optical quality associated with Leica lenses. That should mean sharper images, less aberration, and better quality out of focus areas (aka bokeh) than competing cameras.

Unlike the M series, the Leica Q has full autofocus and autoexposure, though it's also capable of being manually controlled if you prefer. In addition to the controls on the lens, it has a shutter speed dial, control dial, four-way controller, ISO button, and two customizable function buttons, making it much easier to handle in manual modes than the T. The Q's rear LCD is also a touch panel, so it's possible to control the camera that way, but the physical buttons and dials on the body itself mean you don't have to use the touchscreen if you don't want to. That's a significant difference from the T, which relied almost entirely on the touchscreen and didn't provide a great shooting experience as a result.

The Q's lens is a photographer's dream

The Q has a built-in electronic viewfinder with 3.68 million dots, making it the highest-resolution viewfinder available. It's not quite the same as looking through the M's rangefinder tunnel, but it's bright and sharp and has a fast refresh rate. As far as electronic viewfinders go, it's one of the best you can get and it's sharper and better than the external attachment viewfinder for the RX1 or the Leica T. 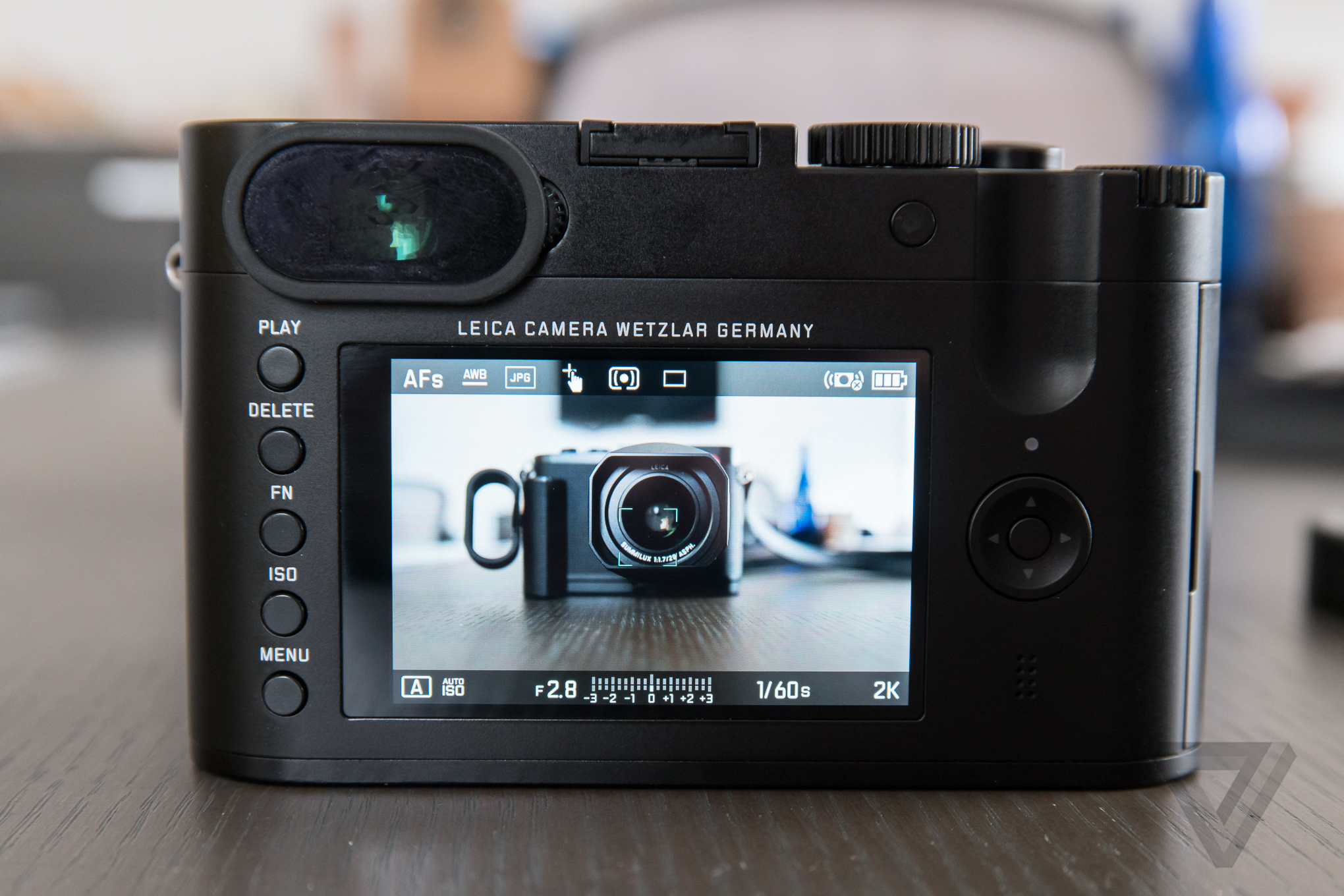 Leica says it's using a modified version of its Maestro II processor from its high-end S line in the Q, and that gives the Q the fastest autofocus of any compact full-frame camera. The Q can also do burst images of 10 frames per second in either JPEG or DNG RAW. ISO ranges from 100 to 50,000, and the camera can shoot 1080p video at up to 60 frames per second. The Q also includes Wi-Fi for remote shooting from a smartphone or transfer of images from a mobile device. From a technology perspective, there isn't much that the Q doesn't have, which is refreshing to see from a company as conservative as Leica. 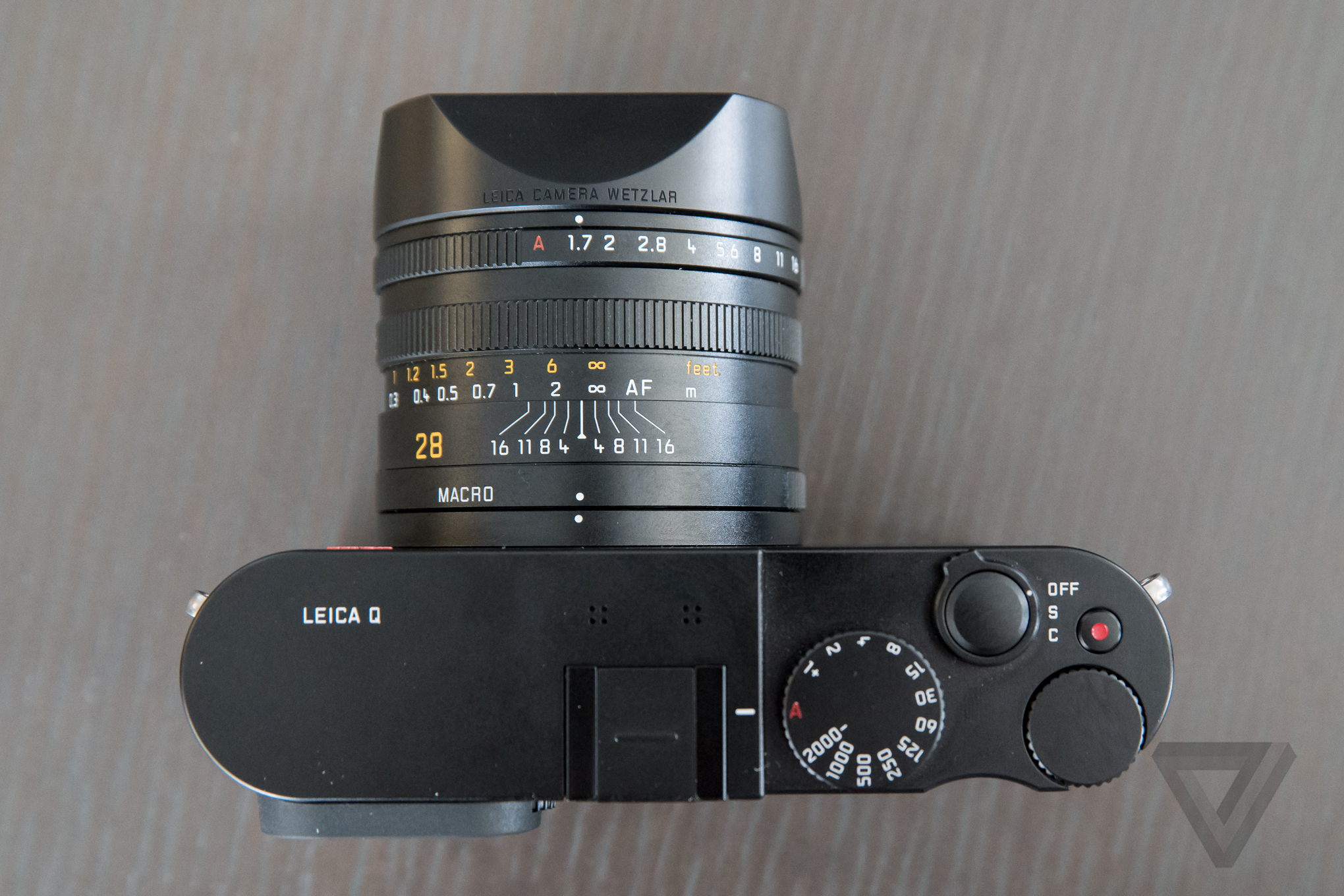 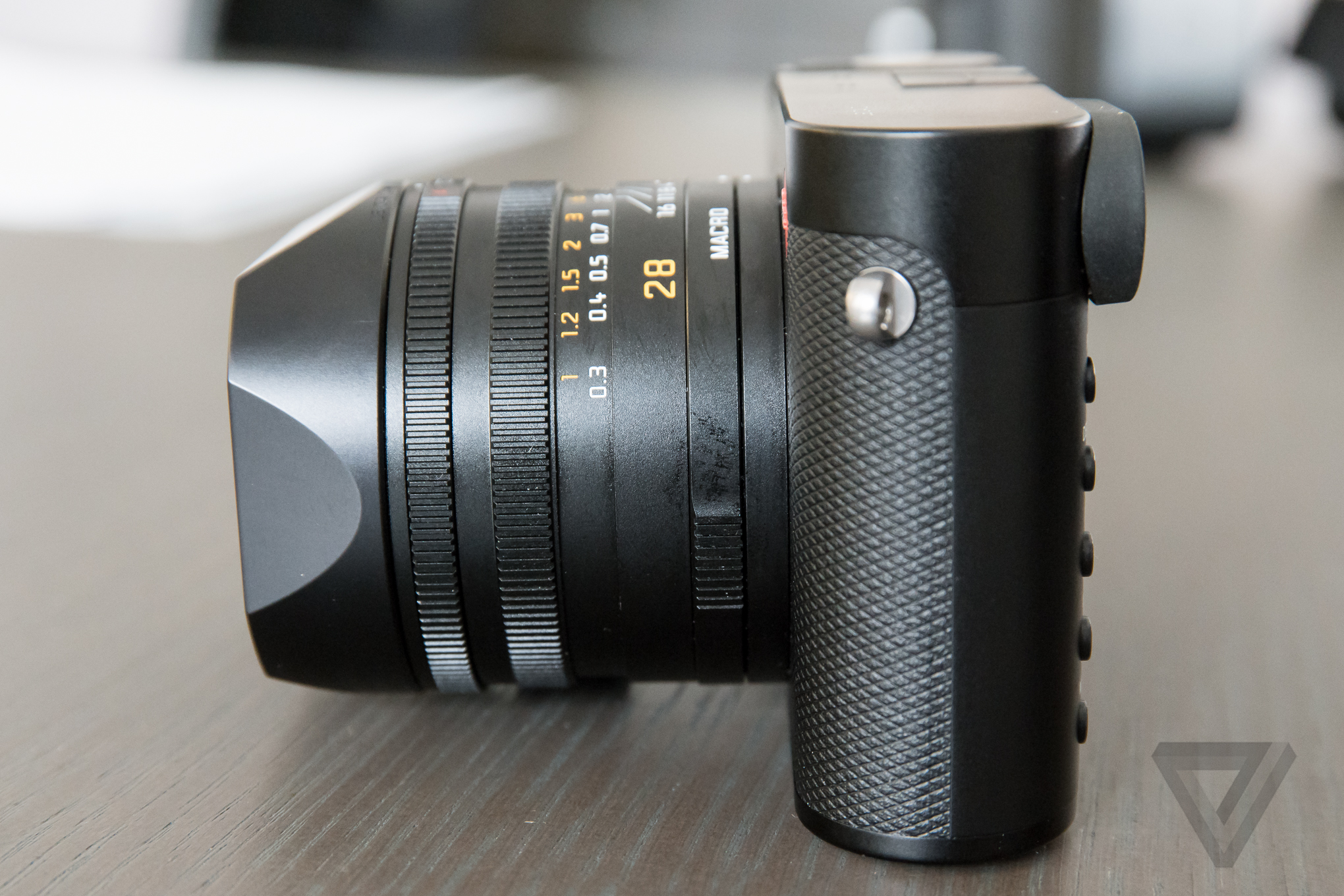 I wasn't able to use a Leica Q for a long enough time for a proper review, but Leica did loan one to me for a few days. (Think of these impressions as more of a "test drive" than a full review.) Shooting with the Q is a fun experience — it's fast and responsive, and the manual controls plus viewfinder make it much closer to working with an M than the T or Leica's other lower-end cameras. Autofocus is exceptionally quick and accurate, much better than Sony's RX1, and it can focus very close, making the Q a fun camera for macro shots.

From a technology perspective, there isn't much the Q doesn't have

The Q is substantial in my hands, and though it is much lighter than the M cameras (mostly due to the fact that it lacks any brass), it's solidly built and feels like a camera that costs a few thousand dollars. It's bigger than Sony's incredibly compact RX1, but the included viewfinder and faster lens with image stabilization are worth the small tradeoff in size.

Images captured by the Q are unsurprisingly stunning, with wide dynamic range and sharp details. Leica says the camera is ideal for street, architecture, and landscape photography, which makes sense given its fairly wide lens. I'd prefer a 35mm lens on a camera of this type, but Leica says the 28mm focal length was chosen because it afforded the right combination of lens size and aperture that the company wanted in this product. A digital zoom button turns on 35mm and 50mm bright lines on the LCD display and viewfinder, but all it's doing is cropping the image after you take it.

The large size of the Q's image sensor combined with the lens's wide aperture make it very easy to separate your subject from the background with a shallow depth of field. The out of focus areas are smooth and creamy, and the falloff from in focus to out of focus is clean and gradual. It's exactly what you would expect from a camera wearing the Leica name.

If there are any complaints to be made, it's that the auto metering skews conservative, leaving many images underexposed, and the auto white balance system tends to be warm under low incandescent lighting, which is common with most cameras. Both issues are easily addressable if you shoot RAW and process the images on a computer after the fact. (Leica even includes a copy of Lightroom with the purchase of the camera and pretty much expects you to do so.)

For more sample images taken with the Q, be sure to check out my photo essay from the Greenwich Concours d'Elegance. 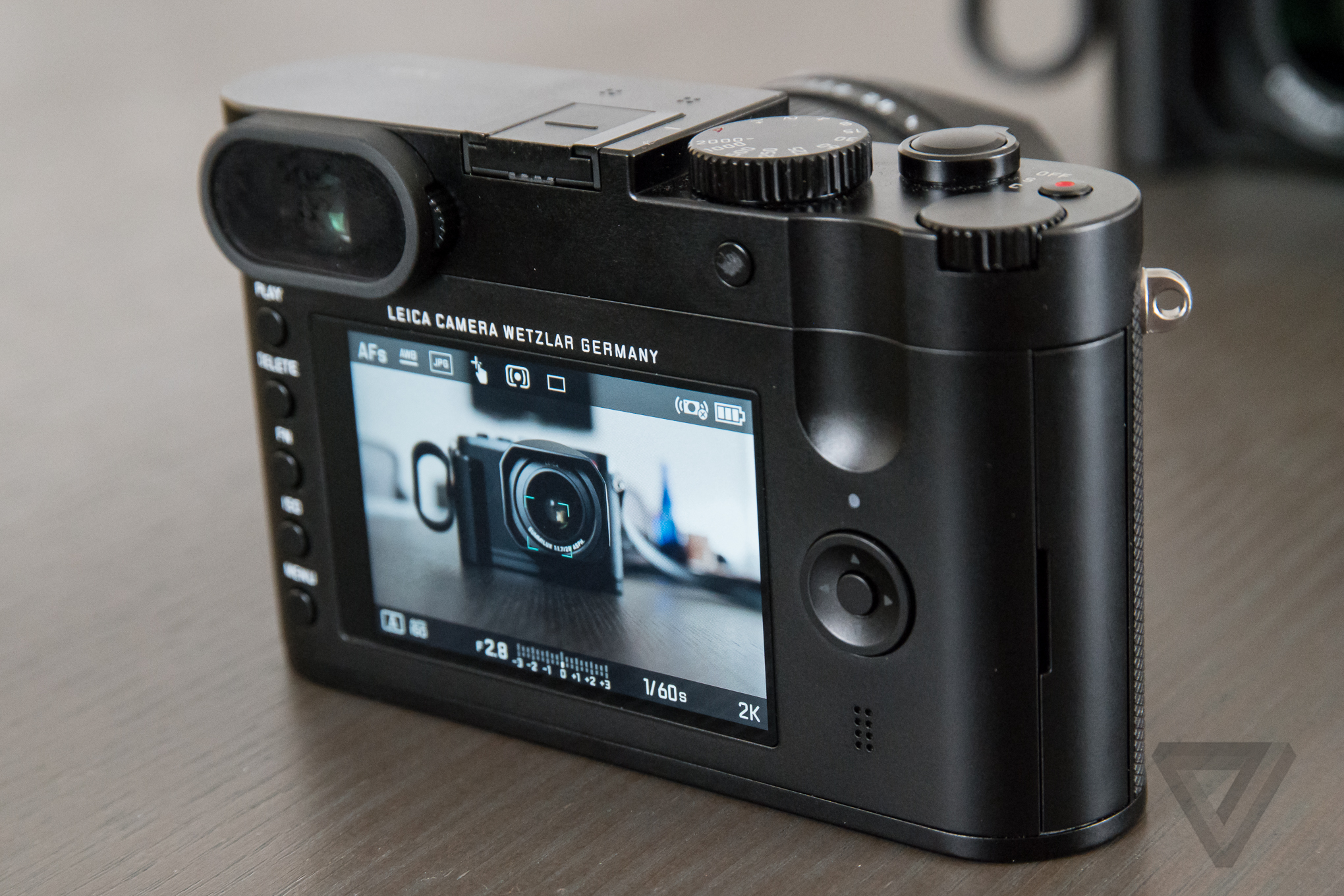 At over $4,000, the Leica Q is very much still a Leica and therefore still out of the reach of many photographers. (If you want to take the glass half full look at it, compared to a new M and equivalent lens, which would run in to the five figures, the Q could be considered cheap.) But Leicas have long been out of the reach of the average camera buff, making them aspirational cameras that one looks up to and hopes to maybe one day lay their hands on. The Q is a camera that actually deserves to be looked up to: it's a fully modern digital camera with great performance and image quality with a design that looks and functions great. If you're going to dream about owning something, you could do far worse than a Leica Q.