This is the new BMW 7 Series, a rolling temple to high-tech

By Chris Ziegler and Dan Seifert

Automakers around the world use their large luxury sedans as testbeds for bleeding-edge tech — a lot of it is ridiculous, but a lot of it becomes practical (think heated seats) or even required by law (think anti-lock brakes or stability control). Over time, the theory goes, some of those technologies filter down to the more plebeian models in the range.

But perhaps nowhere is that effect more important than with Mercedes-Benz's S-Class and BMW's 7 Series, where each new generation brings an entire catalog of sci-fi-esque gadgets and creature comforts. The new 7, announced today, is certainly no exception.

Let's start with the basics: in the US, the 7 will be available in two configurations at launch. The base model is the 740i with a 3-liter, 320-horsepower TwinPower inline six starting at $81,300; above that is the 750i xDrive with a redesigned 4.4-liter, 445-horsepower twin turbo V-8 starting at $97,400. The 740e xDrive plug-in hybrid joins the range in 2016, with pricing to be announced. Both the 740i and 750i xDrive will be sold only in long-wheelbase configurations in the US. That means that, at least for the moment, we'll be losing quite a few US configurations: the current 7 is available in a short-wheelbase version, a diesel, a hybrid, and a V-12. 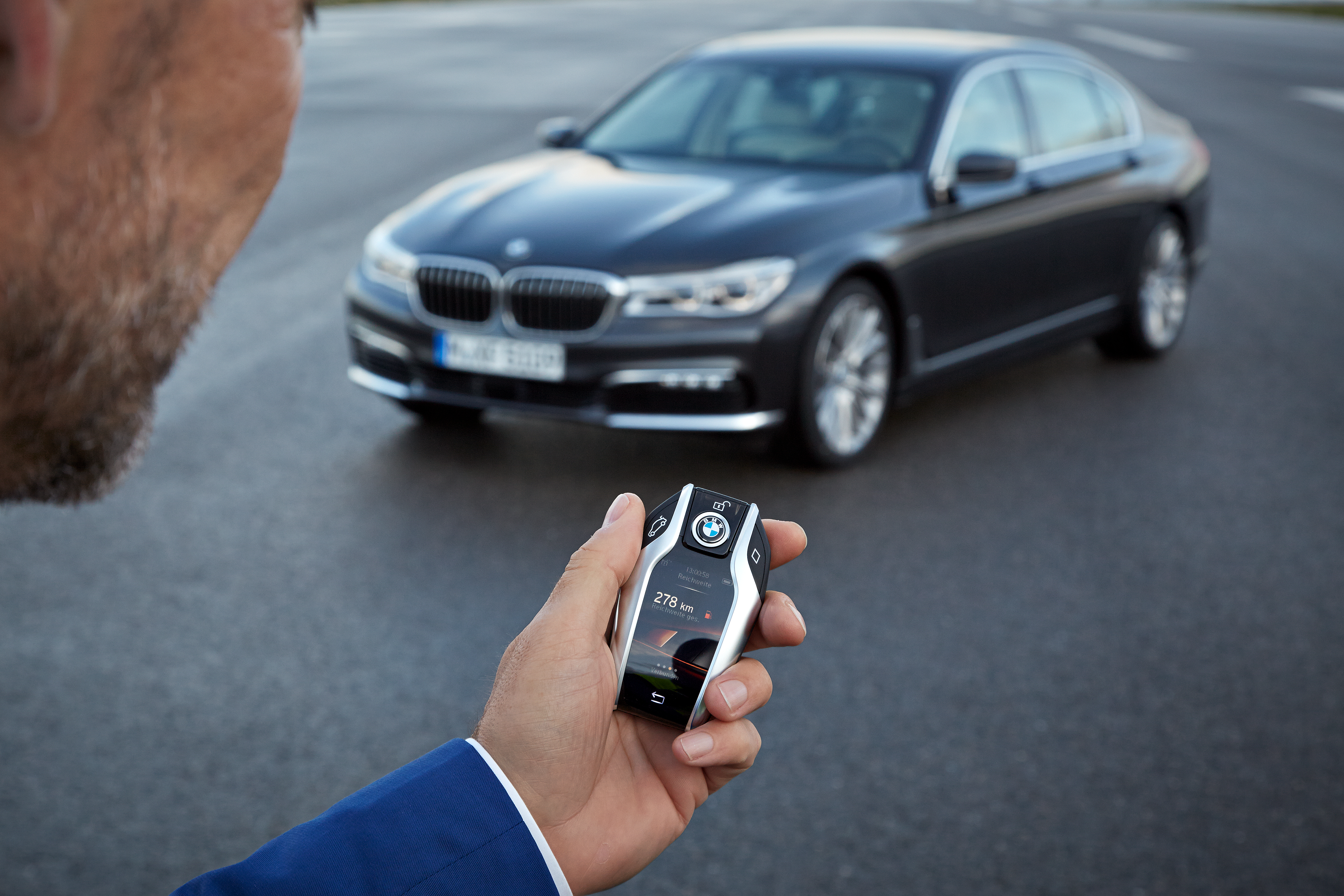 But this car isn't really about engines, it's about... well, basically everything else. It starts with the key — the optional Display Key, to be specific, which looks like a larger version of BMW's standard wireless fob with a full color touchscreen embedded in it. From there, you can control car functions from afar — pre-heating on a cold day, for instance. The fob can charge while it's inside the car, but if it dies, don't worry: there's a second battery that'll make sure it just acts like a regular wireless key until you have a chance to recharge. (The Display Key debuted on the i8 as an option, but it's not available on any of BMW's other vehicles yet.)

So, yes, to recap: your key, should you tick the Display Key option when you order your 7, is effectively a smartphone minus the phone. But there's more, of course.

Your key is effectively a smartphone minus the phone

Inside the cabin, you may notice a pleasant odor. That would be the 7 Series' optional Ambient Air package, featuring a programmable fragrance system that offers eight choices in three different intensities. (Mercedes actually beat BMW to configurable cabin fragrances with the latest S Class.) 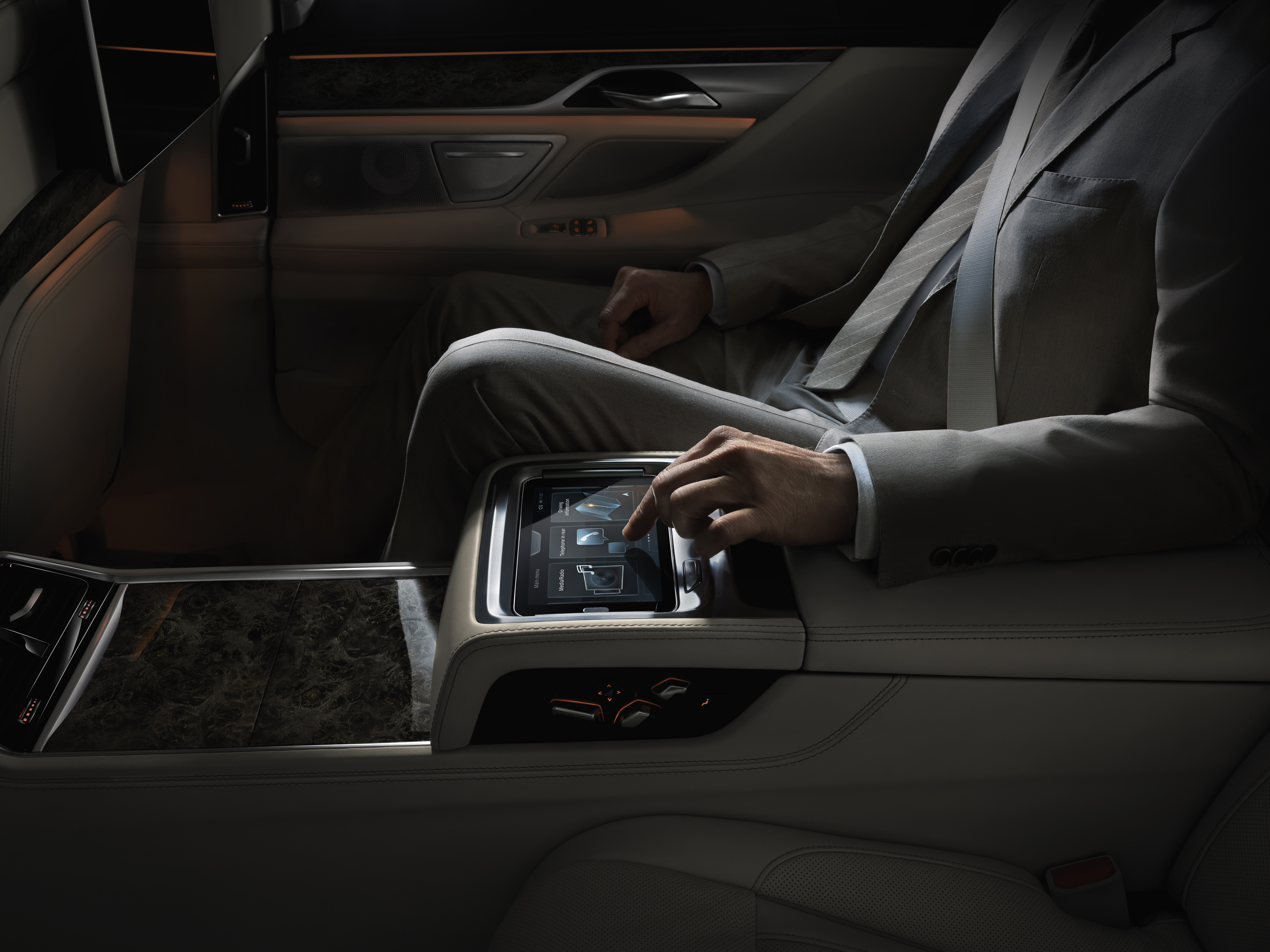 The 7 Series, more than any other BMW, is as much about the passenger experience as it is the driver's — especially important in China, a key market where many well-off car owners are chauffeured. Those passengers probably aren't going to be disappointed here, particularly if they spec the Luxury Rear Seating Package and Rear Executive Lounge Seating Package.

The executive package, in particular, is insane

The executive package, in particular, is insane. It lets rear seats be reclined up to 42.5 degrees, while the front passenger seat can be moved all the way forward, the headrest can be electrically moved out of the way, and a footrest pops out of the back. The 7-inch Touch Command Tablet, a Samsung running Android that we first saw at CES earlier this year, sits in the rear center console and can be used to control a variety of car functions — including the "Vitality Program," which BMW says will "revitalize the body on longer journeys" through active seat movements.

And when those passengers look up at night, they'll probably get a kick out of the optional "Panoramic Sky Lounge LED Roof," which projects light across etchings on the sunroof's glass to show a "starlit sky" in your choice of six colors. (BMW division Rolls-Royce offers a similar option, but it's done through fiber optics wired directly into the headliner and costs a hilariously large amount of money.)

For drivers, meanwhile, there's a bunch of technology: a much larger heads-up display, for instance, that can show considerably more information. (It's basically an augmented reality windshield at this point.) Cameras outside the vehicle automatically scan road signs and upload the information to BMW's servers, which feed back into updated navigation data that's beamed back to all cars. 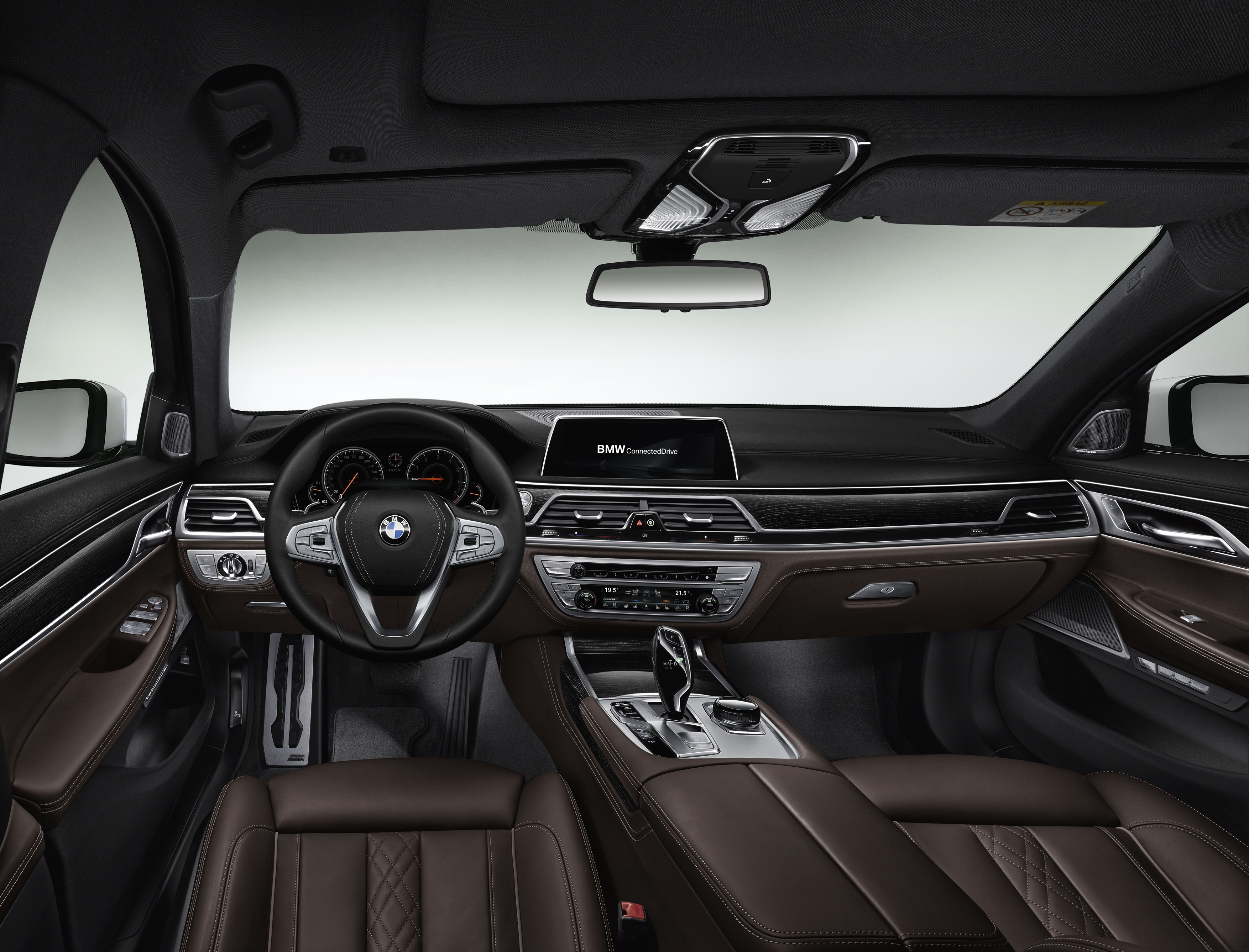 The new 7 isn't fully self-driving — that's still going to be a while yet — but it does about as much as it possibly can within the bounds of the law. There's dynamic cruise with full stop and start, of course, with a traffic jam assist function that will pilot the car in heavy traffic as long as one hand remains on the wheel. It'll also park itself, although at least in US models it appears that a driver needs to be in the car — probably more for legal reasons than technological constraints.

"But wait, that's not all," as they say. (News of this car was delivered on a 24-page press release, and it's difficult to decide which wild features warrant discussing here.) This car also debuts iDrive 5.0 — BMW's oft-maligned connected car system that has improved by leaps and bounds in recent years. Here, iDrive gets touchscreen support for the first time (but still maintains the traditional iDrive controller in the center console) and introduces gesture control. Sensors in the headliner track the driver's hands; there are only a small number of gestures supported, presumably to limit distraction and prevent the system from getting confused; you can raise or lower volume with a circular finger motion, wave your hand left or right to accept and reject calls, and configure one additional gesture to control one of several different functions. 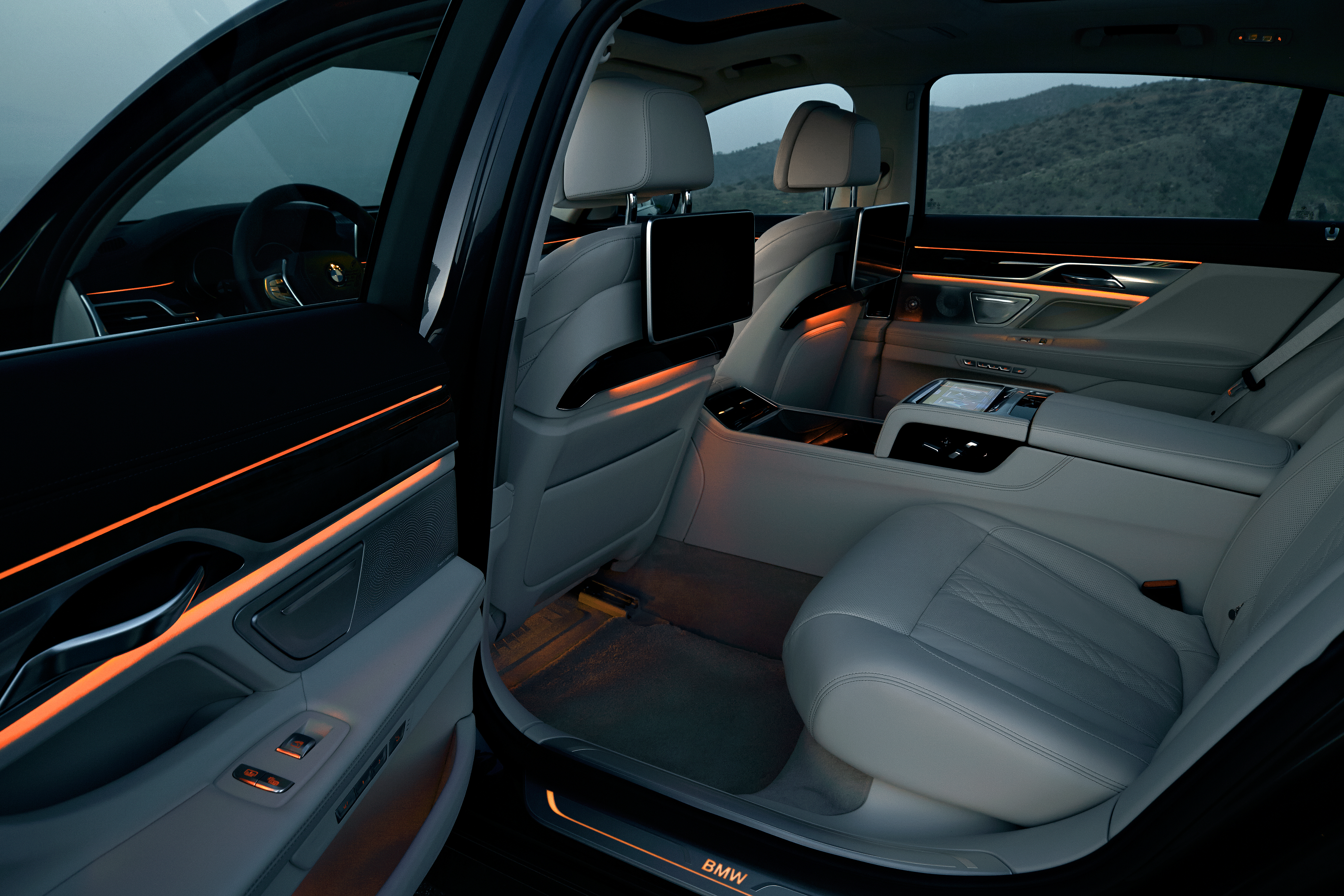 We recently had a chance to see the car up close; even though it's a 7 Series, it's much less imposing than you might expect. It'd be easy to confuse it for a current-generation 5 Series, even though the long-wheelbase version that's available in North America is considerably larger. Short wheel overhangs and swooping contours do a lot to minimize the new 7's presence, and BMW says that it should handle more like a 5 Series when you're behind the wheel than the outgoing 7. It's an attractive car, without a doubt, and might be the best-looking 7 since the third-generation E38 of 1994–2001.

In person, you really get the sense that BMW designed this car around the passenger

In person, you really get the sense that BMW designed this car around the passenger, not the driver. There are two 10-inch displays mounted behind each front seat, to which you can send video content from a phone or tablet via Chromecast (including Netflix). Oddly enough, these are not touchscreens, even though the natural inclination when you sit in the car is to use them as such — for touch, you'll have to turn your attention to the 7-inch tablet in the center console. For an environment that's supposed to be relaxing, the displays, colorful lights, and interactivity can be a little overwhelming.

In the front, BMW's various methods of interaction with iDrive (as mentioned earlier, there are no less than three different ways to control the infotainment system) are a bit overwhelming. The gestures to control the system did work as advertised, but they don't feel natural and it's generally just easier to do the same thing with the steering wheel-mounted buttons. Also confusing is BMW's complete lack of support for Android Auto and Apple CarPlay, which will undoubtedly be a growing customer demand over the coming years. (BMW tells us that it is still evaluating those systems, but there's no news as to when it might support them.)

The 740i and 750i xDrive arrive in dealerships this fall; just remember to bring a driver when you buy it so you can sit in the back.