The UE Boom remains perhaps the best Bluetooth speaker you can buy, but not everyone has $179.99 to drop on one. And the company realizes as much. So today, Ultimate Ears is launching the $99.99 UE Roll, a small "pint-sized" speaker that replaces the Mini Boom in the product lineup. Just like the Mini, the newer Roll is meant to be taken anywhere and everywhere. And from that perspective, it's immediately a big leap over the old device.

That's mostly thanks to improved durability. The UE Roll is rated IPX7 waterproof, meaning you can take it in the shower, put it by the sink, or carry it out in the rain and not worry about breaking it. There's a door concealing the USB port and aux input, but even the connectors themselves are waterproof; the door's really just there to keep out dirt. You can submerge Roll in water, but since it can't float, UE is cleverly bundling a blow-up floaty with online orders from UE.com so you can listen to the Roll in a swimming pool. Lastly, it's also shockproof; UE designed it to take the occasional drop or unexpected tumble and come away fully functional. 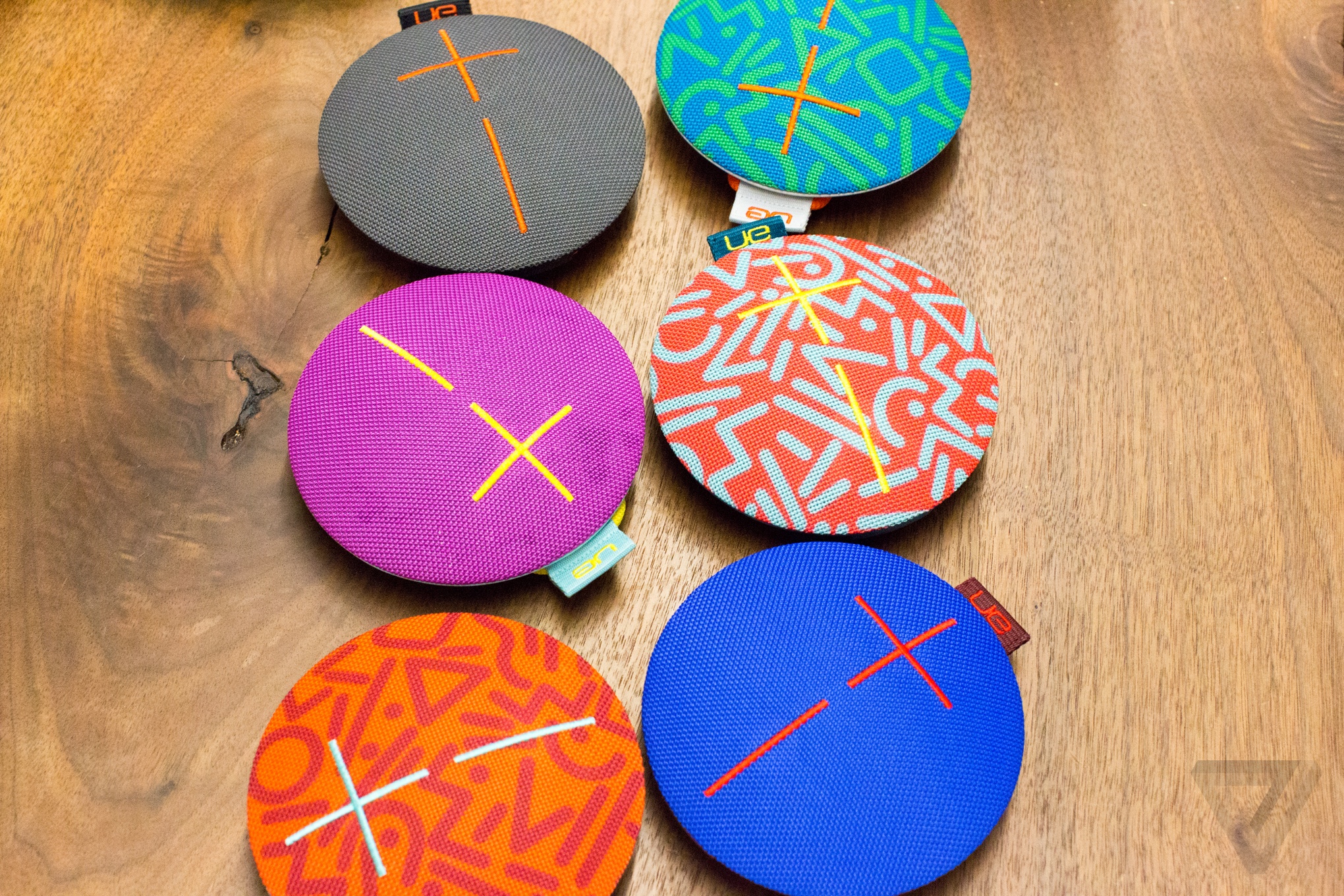 The Roll's unique, flying saucer-like design makes it fairly easy to keep with you or throw into a bag. Turn it over and you'll find a built-in bungee cord loop that can be used to attach the speaker to a shower head, the wall, or pretty much anything that can support its 0.75-pound weight. This is a speaker made to be your picnic soundtrack or to get knocked around on a hike — it's "lifeproof" as the company calls it. Unlike other Boom speakers, this one actually embroiders UE's signature plus and minus volume controls right onto the acoustic fabric. It's definitely a change compared to the plastic strip on other speakers, but the buttons are super clicky and feel great.

That upward-facing design puts out 360-degree sound so there's no particular "sweet spot" to find, but you shouldn't expect miracles in the audio department. I'd describe the Roll's audio performance as perfectly adequate for its size. The bulk of test tracks that I played sounded fine (and better than many other $99 units), but if you've got a bass-heavy music collection, going with a bigger Boom is probably a better choice.

Stereo separation leaves a bit to be desired, but there's only so much UE can do considering the Roll's small footprint. You can install a smartphone app to customize EQ if the out-of-box audio performance isn't to your taste. The app is also used to set alarms (the Roll has an internal clock, so it'll still wake you up if your phone battery dies) and pair the Roll with another UE speaker like the Boom or Megaboom.

The Roll boasts 9-hour battery life — down slightly from the Mini Boom's 10 hours — and wireless range of up to 65 feet. That's an improvement over the old speaker. Overall, the new UE Roll is a clear step up compared to the outgoing Mini Boom, which was already a decent, inexpensive speaker. But this is one you truly can take everywhere. The shower is still my chosen spot; I've been listening to the Jurassic Park theme for the last week, and that sort of epic start to the morning really wasn't easy to pull off before. You can find the UE Roll in several colors beginning today online and at Best Buy retail stores. 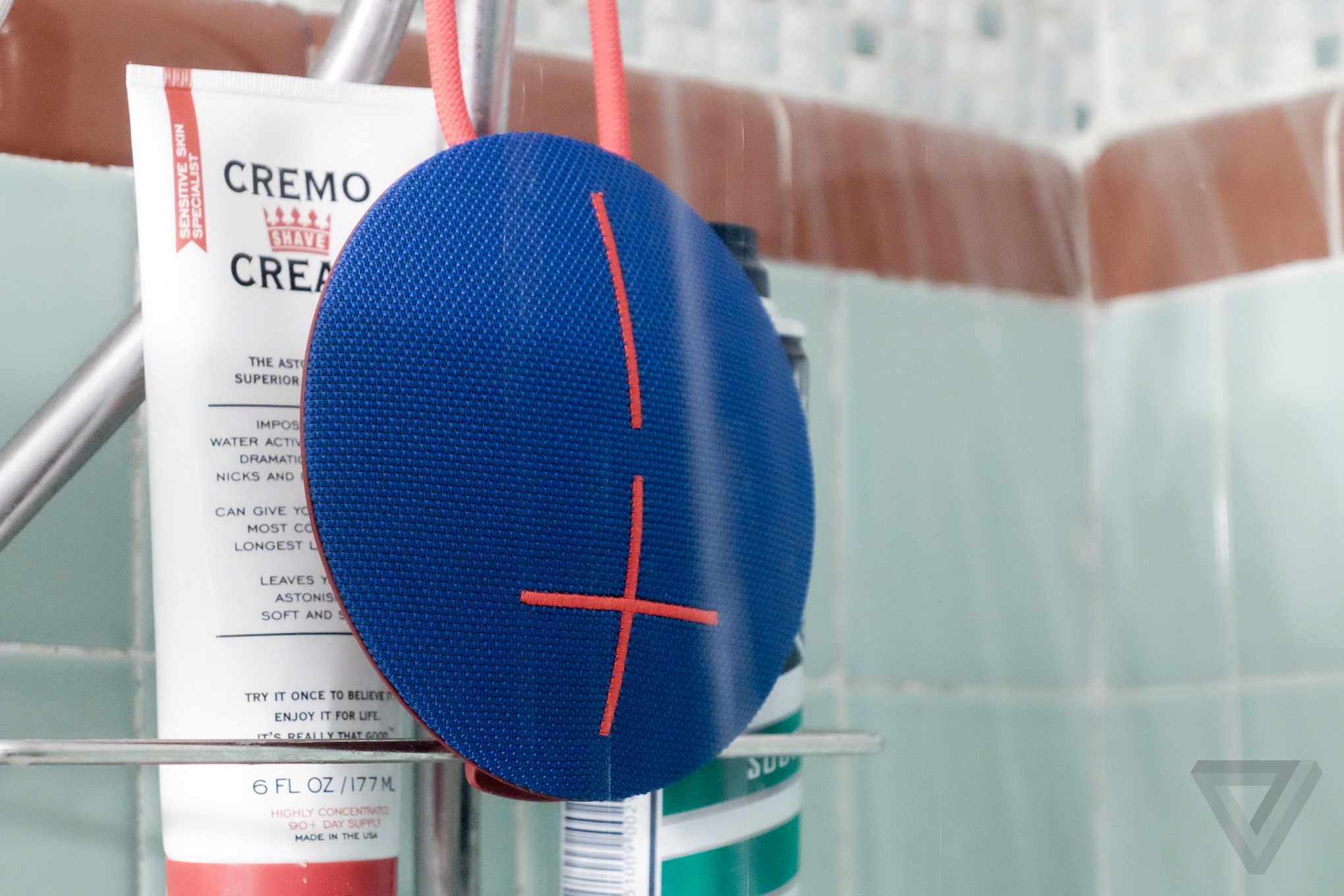