Thanks to older moms, the US birth rate increased for the first time in seven years

Thanks to older moms, the US birth rate increased for the first time in seven years

Women in their 30s and 40s are having more kids

For the first time in seven years, the US birth rate increased — by 1 percent in 2014, compared to the year before, the Centers for Disease Control and Prevention report. The increase wasn't universal, though — the teen birth rate dropped by 9 percent, a record low.

Births among women in their 30s increased by 3 percent

The general fertility rate grew to 63 births per 1,000 women in 2014, from 62.5 births per 1,000 women in 2013. But if teens are having fewer children, how did the birth rate increase? Women in their 30s and 40s are having more kids — and it's showing up in the CDC's statistics. Births among women in their 30s increased by 3 percent; for women in their 40s, by 2 percent. The change was apparent for women of all races, the researchers report — except among American Indian and Alaska Native women, who experienced a decrease. The proportion of births among older married women increased, while the proportion of unmarried younger women who gave birth went down. 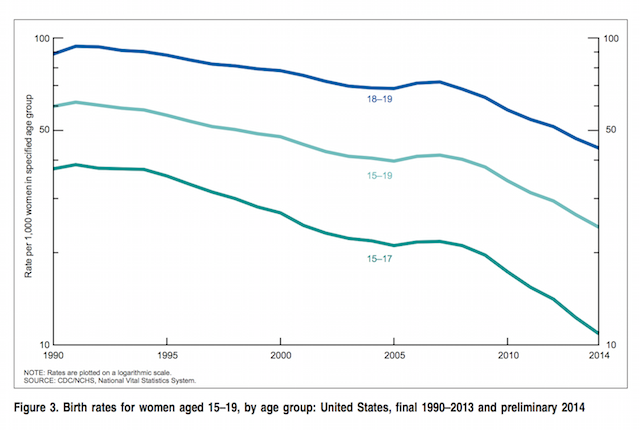 There are probably many reasons for this change, but an increase in contraceptive use most certainly played a role. More women are using condoms and the Pill than they were 20 years ago, and IUDs are gaining in popularity because of their ease of use. In fact, if you ask the CDC about it, the answer is pretty clear: the best contraceptives for teens are IUDs and implants — and it looks like their use is paying off.

The most recent peak in teen births occurred in 1991. Back then, there were close to 62 births for every 1,000 women aged 15 to 19. Today, the rate is 24 births per 1,000 women, which means that teen births have decreased by more than 60 percent in a quarter century. It's a slow change, but it's still very good news; children born to teenage parents are more likely to be born prematurely, and they're more likely to suffer from poor health early in life.