The new Zelda game is like Destiny, and it's great

The new Zelda game is like Destiny, and it's great

Honestly, I don't even mind that The Legend of Zelda for Wii U was an E3 no-show and won't come out until next year. Tucked away into Nintendo's otherwise underwhelming digital event was an unassuming new Zelda game for 3DS called Tri Force Heroes; I didn't think much of it during the broadcast, and you probably didn't either.

But after talking to the director and playing the game for a while with some Nintendo employees, I think it might just turn out to be the most exciting, original, and entertaining Zelda title in recent memory. It's certainly the most fun I've had at E3 so far.

Every teammate really needs to know what they're doing

I mention that I played the game with Nintendo employees for a reason — this is a multiplayer-focused title where each person really needs to know what they're doing. It's designed for three players, each of whom has to communicate and work with both their partners to solve puzzles and progress through elaborate dungeons.

"In a lot of multiplayer games there are a lot of people, but they're not really playing together," says director Hiromasa Shikata, who also helmed 2013's excellent A Link Between Worlds. "That was the main focus — building a multiplayer game that requires cooperation." Shikata has been working on the Zelda series ever since all-time classic Ocarina of Time, and tells me he's long had the idea for a cooperative version. 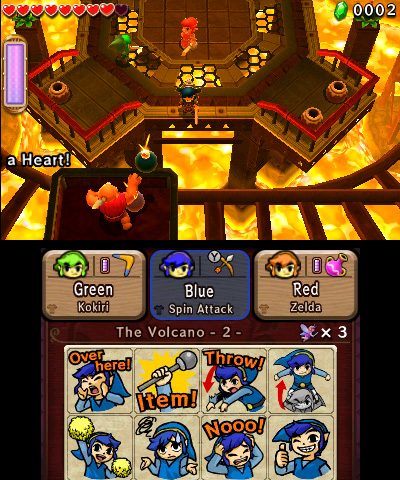 This isn't the first Zelda game with a focus on co-op — the Four Swords spinoffs have provided raucous four-player action for anyone with a surplus of Game Boy Advance link cables. But their tenor was a little different to that of Tri Force Heroes. "At its heart, it was kind of a party game," says Shikata, who contrasts his new game with Four Swords' simple puzzles and competitive rush to collect the most rupees.

Instead, Tri Force Heroes makes you communicate to advance. Go over there. Flip that switch. Stand on my shoulders to get up there. Throw a bomb on the edge so I can blow it at that enemy across the chasm. The puzzles are usually simple enough but require some lateral thinking to solve for the first time. When you're playing next to two people, you'll be in constant discussion about how to move forward. If you're not talking to your teammates, you're playing it wrong.

It reminds me of nothing as much as Destiny's exhilarating raids, of all things, which are highly collaborative activities that require six players to be in constant voice contact — at least the first few times they play through. Tri Force Heroes has similar puzzles that involve coordinating player locations and abilities, though Shikata says he wasn't influenced by anything other than prior Zelda games.

I was impressed by the neatness of the puzzles; they're challenging in a different way to those in most Zelda titles. Once you've figured out what to do, they test your ability to perform tasks as a team. Deciding what to wear at the start of your adventure is crucial, with different outfits boosting different abilities. All three players share a single health bar, so if one screws up, the other two suffer. Failing is still fun, though, and the desire to succeed as a team makes this Zelda one where you won't want to throw the controller down in frustration.

But what if you can't get two 3DS owners together in the same room? Tri Force Heroes supports online play, too, but true to classic Nintendo form there's no voice chat. Instead, the 3DS' bottom screen is dominated by eight panels featuring pictures of Link in various emotional states, each of which you can tap to convey things like joy, frustration, or the intangible sense that you would like someone to come over here and stand on a button. It's not as direct as telling your teammates what to do, of course, but it should work in a pinch.

"It's actually creating a new form of communication," says Shikata, who doesn't see the lack of voice chat as a negative. "I believe it might be a little bit stressful for players to try to figure out how to communicate what they want to do, but I think that because of that feeling, when you're able to do it successfully there's a level of satisfaction that you don't find in other games." 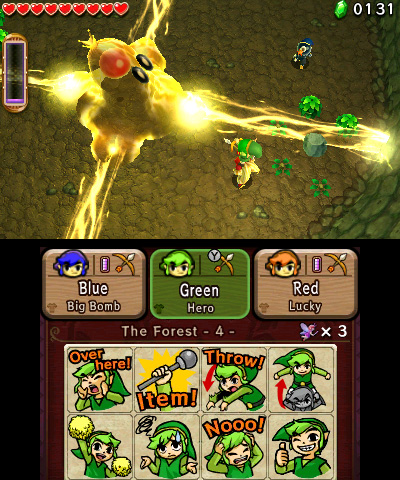 I haven't played the game online with strangers yet, though my team did use the communication panels as a complement to our regular chat. (It's hard not to press the one where Link shakes cheerleader pom-poms.) My feeling is that the experience won't be as good as playing with people in the same room. But really, you could say that about any game. Nintendo has at least made the effort to include communication features that are fun in their own right.

Tri Force Heroes won't offer what many people expect from a new Legend of Zelda game; there's no epic storyline to follow, no sweeping overworld to explore, and no majestic horse to ride. You'll have to wait for next year's still-untitled Wii U game for all of that. But Shikata appears to have shaken up the stagnant series again with his latest game. If its E3 showing is any indication, Tri Force Heroes is bursting with invention and personality, and might just be the online Zelda game you never knew you wanted.