The best coffee maker you can buy

Share All sharing options for: The best coffee maker you can buy

It’s estimated that there are between two dozen and 100 different species of coffee plants, but for the common drinker, only two matter: coffee arabica and canephora. The journey from these plants to your cupboard is an exhausting one: coffee trees produce “coffee cherries,” where coffee beans hide. When ripe, these cherries are picked and processed to extract the beans; the beans are dried, hulled, polished, graded, sorted, shipped; and roasted at about 550 degrees Fahrenheit thousands of miles from their point of origin. Finally, they’re ready to be ground and brewed.

Of all those steps, you, as the average coffee drinker, only have say in the last two, which makes your decision of how you make your coffee that much more important. Now, there are a lot of different ways to brew coffee — french press, percolator, and the pour-over method, to name a few — and many more opinions on what is, and isn’t a good cup of coffee.

The requirements of a good coffee machine, however, are fairly straight-forward: it needs to quickly produce a cup, or pot of coffee. It should have convenient features, but not so many that you have to refer an owner’s manual: you’re brewing coffee, not landing a spacecraft. And because it will be a permanent fixture on your kitchen counter, it should be space efficient — an appliance that blends into its environment. But most importantly, it needs to brew a great cup of coffee each and every time you hit the brew button.

Our review of Bonavita 8 Cup Brewer with Stainless Carafe 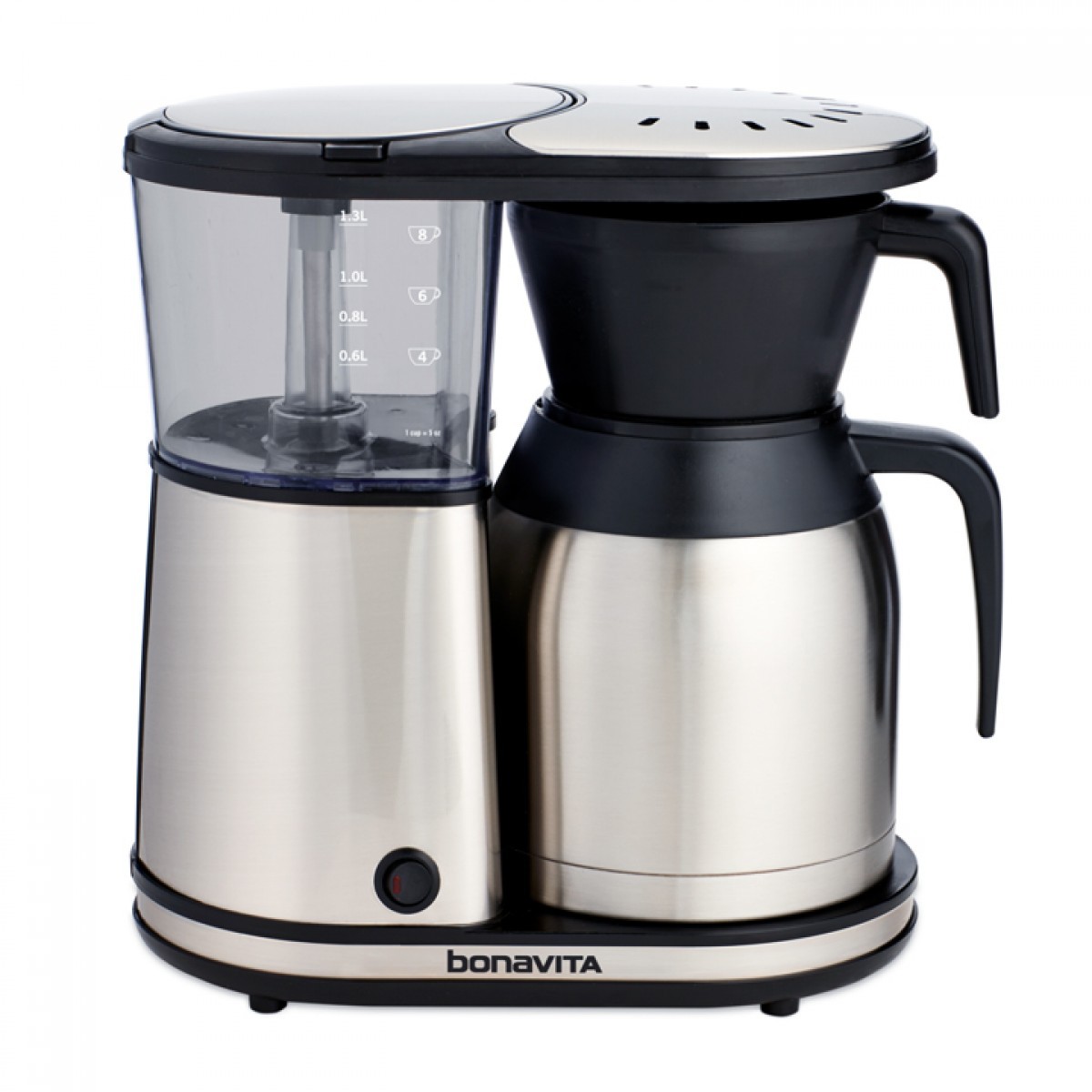 If you’re looking for a simple coffee machine that regularly delivers an excellent cup of coffee, go get yourself a Bonavita BV1900. From a design standpoint, the Bonavita stainless steel componentry and pared down profile makes it sleek without being ostentatious, or bulky. Unlike other machines, there’s only one button here with a single light that shines when the machine is on, so operating it is simple and intuitive. The machine features a wide showerhead and a flat-bottomed filter basket, ensuring consistent saturation, and a “pre-infusion” mode that briefly soaks freshly ground beans in order to release whatever gas is trapped inside. The machine’s 1500-watt heater brings the water to a range of 195-205 degrees Fahrenheit, the heat recommended by the National Coffee Association. And it’s quick too — each of the 8-cup pots we made took just under 7 minutes to brew.

That said, there are a few things the Bonavita BV1900 doesn’t do: it won’t grind your beans or weigh them for you; you can’t set a timer for the machine to have a hot cup of coffee waiting for you in the morning; and unlike other machines, it won’t tell you exactly how long the brew process will take. In a few machines we tested, the lid of the carafe let coffee through — with the Bonavita, you have to take the lid off, place it aside, insert the filter holder and repeat the steps vice versa when the coffee was done.

As part of our testing process, we called on staff across Vox Media (including the editor of Eater Drinks, Kat O’Dell) to visit a pop-up coffee shop we set up in a conference room. Although the tasters were a finicky bunch — our business editor Ben Popper, for instance, says he wants his coffee strong enough to see the grounds in it — the Bonavita regularly produced a superior cup, palatable to a wide range of drinkers: rich without being acidic and just strong enough to jolt you back to life without crippling your nervous system.

Ultimately, the Bonavita BV1900 is a feature-light machine that attempts to recreate the much-coveted but time intensive pour-over method, and it does a fairly good job of it. And at just under $200, it does a much better job of making coffee than fancier machines that cost significantly more.

Our review of Chemex Ottomatic 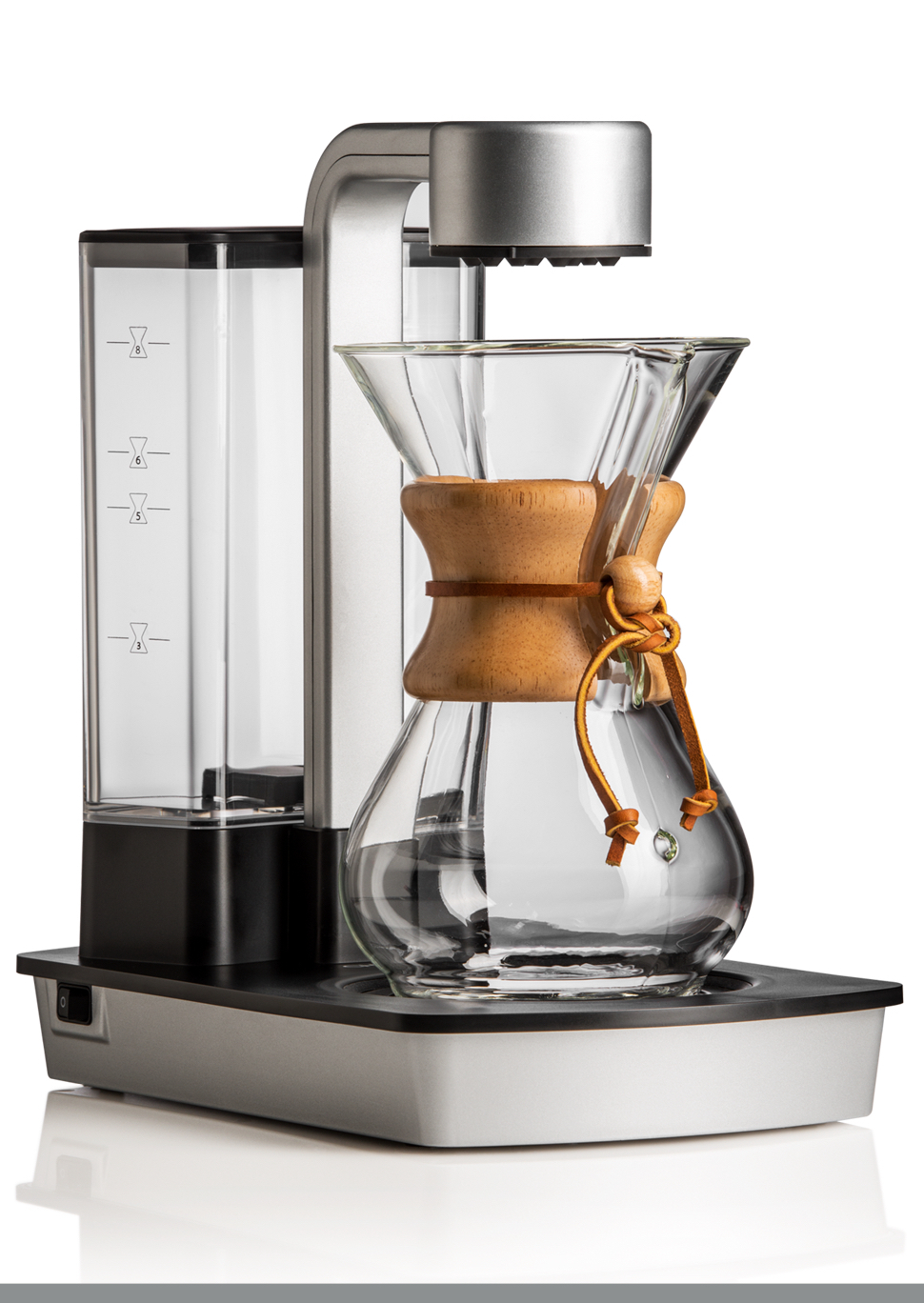 The second-place spot goes to the Chemex Ottomatic, a machine that comes even closer to the pour-over method. If the Ottomatic looks familiar, that’s for good reason: it’s little more than the classic Chemex carafe, coupled with a hot plate and a nozzle that offers a “pulsating water-bath,” soaking your grounds evenly.

Admittedly, the Ottomatic produced the best cup of coffee I tasted throughout the day of testing: smooth and aromatic, like something you might order from a Blue Bottle coffee. That said, it has one critical flaw: it’s price is $350, making it more expensive than any other machine we tested. It’s impossible to justify that cost considering what you’re getting. The machine’s cheap plastic componentry is incongruent with the original carafe’s elegant, minimalist design and when you figure that the original Chemex goes for under $50, it feels foolish to pay $300 for the simple luxury of not pouring water yourself.

Our review of Breville Grind Control 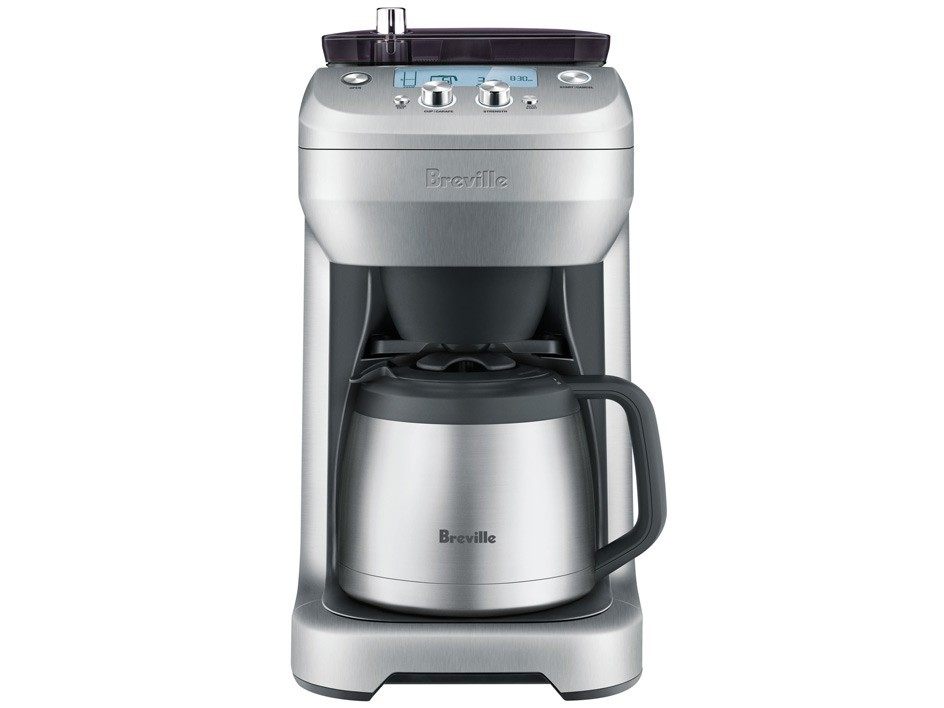 The Breville Grind Control features a built-in burr grinder, seven brew settings to adjust the amount of ground coffee being used, and five settings to vary the steeping time of the coffee and water. Although those options could be great for some users, for the vast majority of coffee drinkers, there’s too much here to take into account. Using the Breville feels a bit like driving a luxury SUV: sure it’s an indestructible machine capable of accomplishing heroic feats of strength — but most of us don’t need that. We just need to get from point A to point B.

Our review of Capresso CoffeeTeam TS 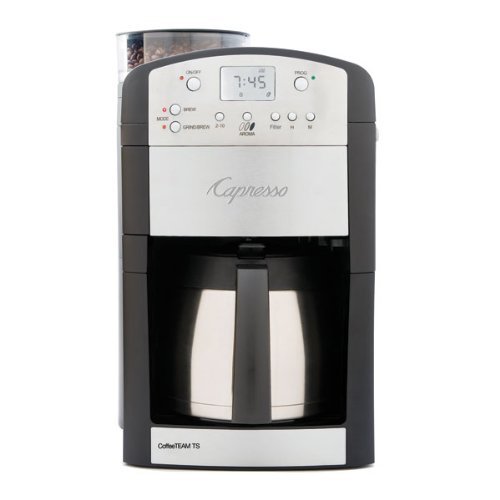 Of the more feature-heavy machines, the Capresso CoffeeTeam TS made the best cup of coffee we tried. It has an adjustable burr-grinder that lets you specify just how many beans to grind, as well as a timer and a drip-stop option so you can pour yourself a fresh mug of coffee without restarting the brewing process, or making a mess. But the machine’s downfall is its rickety design — the machine is largely made of flimsy plastic, the handle on our brand new carafe was loose, and once we removed the bean container, it was difficult to replace it neatly.

Our review of Nespresso Pixie Clips 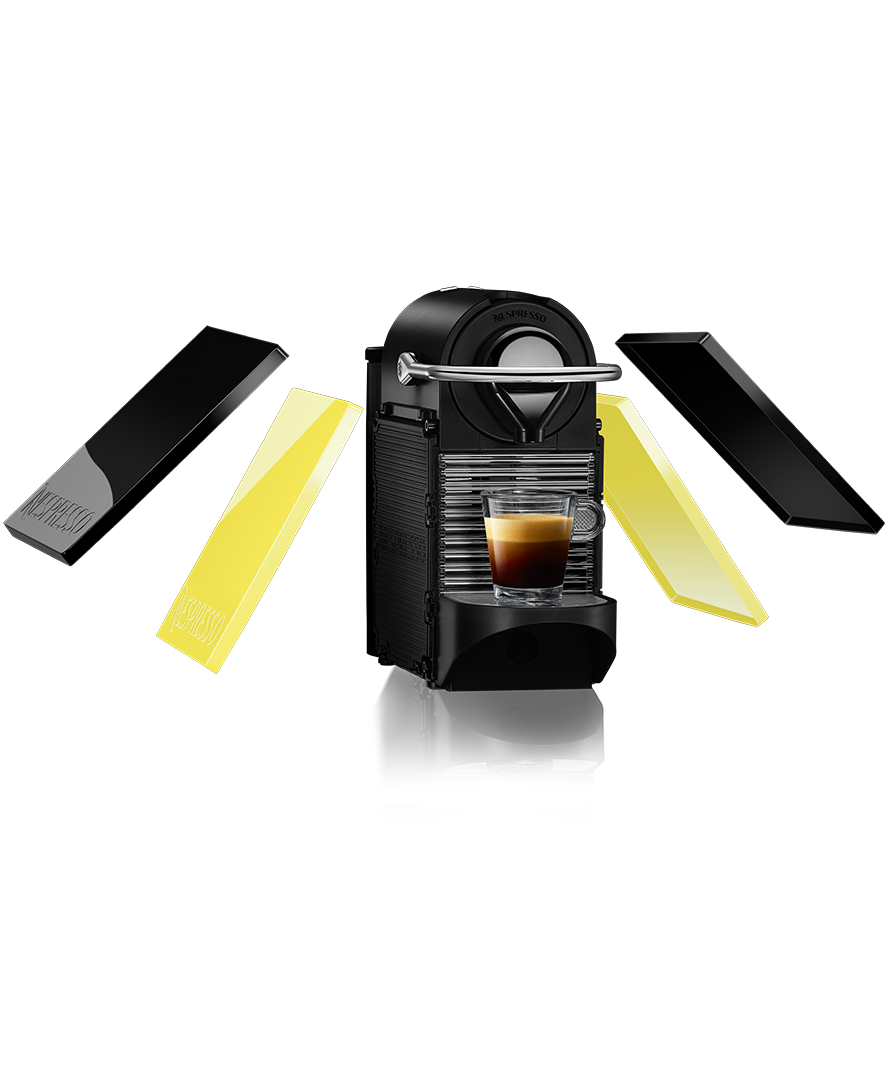 Certainly the most compact of the group — perfect for a small kitchen — the Nespresso Pixie Clips proved to be the better of the two pod-based machines we tested. Within roughly 30 seconds, the Pixie produces either a single espresso or a lungo that’s not quite excellent, but certainly does the trick. Nespresso offers plenty of options when it comes to pod choices — from the “powerful and contrasting” Ristretto, to the “floral and wild” Bukeela Ka Ehtiopia — but at nearly $.70 per pod and up, regular coffee drinkers might be better off with a far more economic drip system. 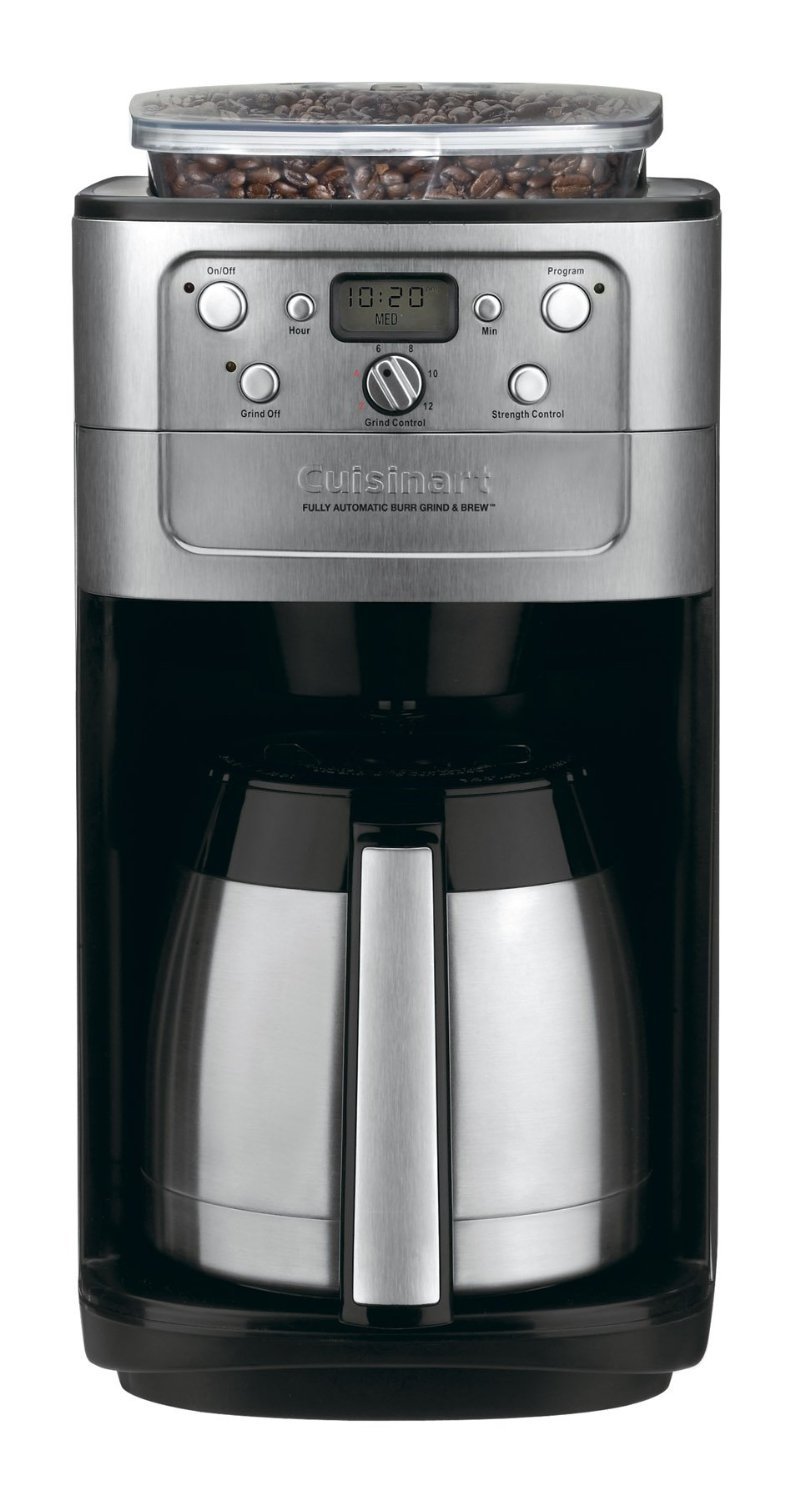 Although the Cuisinart Burr Grind & Brew has a sturdy design and its double-wall insulated carafe kept our brew warm, the machine was finicky, and difficult to predict. The coffee we made was either too watery or too strong, and there were too many variables to keep track of. As Sam Sheffer, The Verge’s social media manager put it, “This tastes no good.”

Our review of Krups Moka Brew 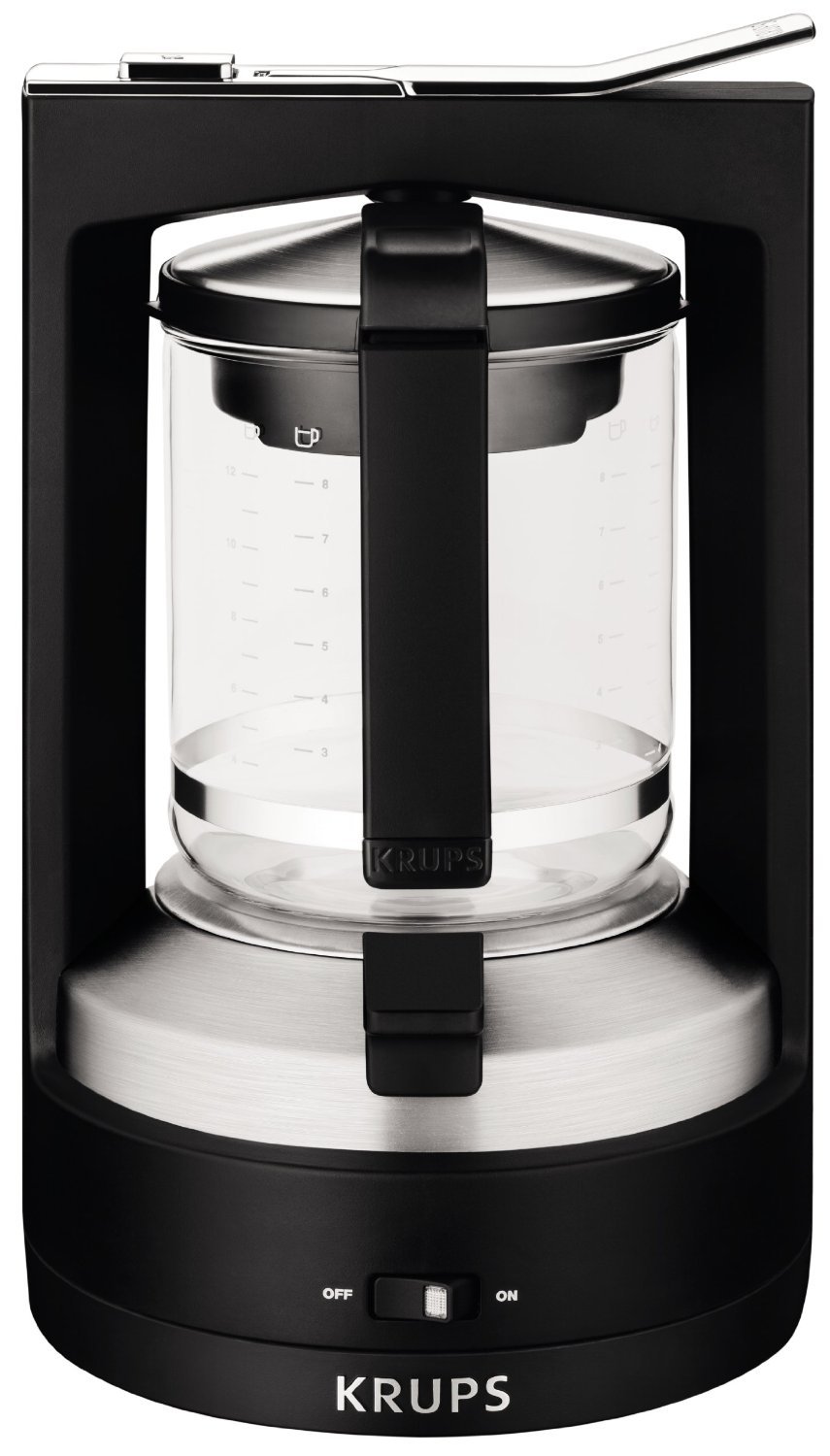 The Moka Brew gets points for its original design — it resembles a camping lantern more than a coffee machine — but that’s the extent of our praise here. The coffee filter is shallow and fairly small. The KRUPS took longer to brew a pot than most of the other machines, and the result was a mild brew bordering on watery.

Our review of Keurig K250 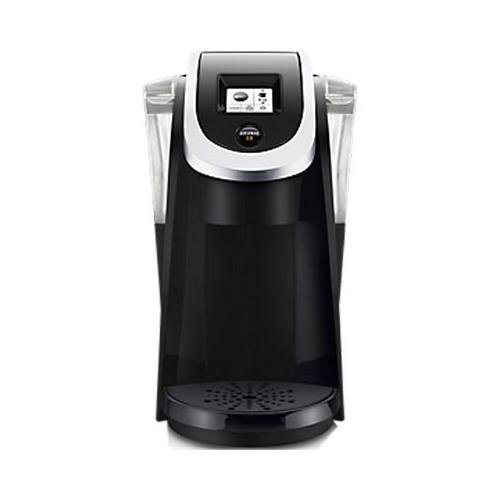 In the words of Michael Bean, Vox’s director of video growth, the Keurig K45 Elite offered a “mediocre experience.” The coffee left the machine at a lower temperature than in other set-ups, and tasted was both astringent and watery. The Keurig was also the only machine we tested that had a touch screen, a feature that was both unnecessary and a blatant attempt to seem modern. 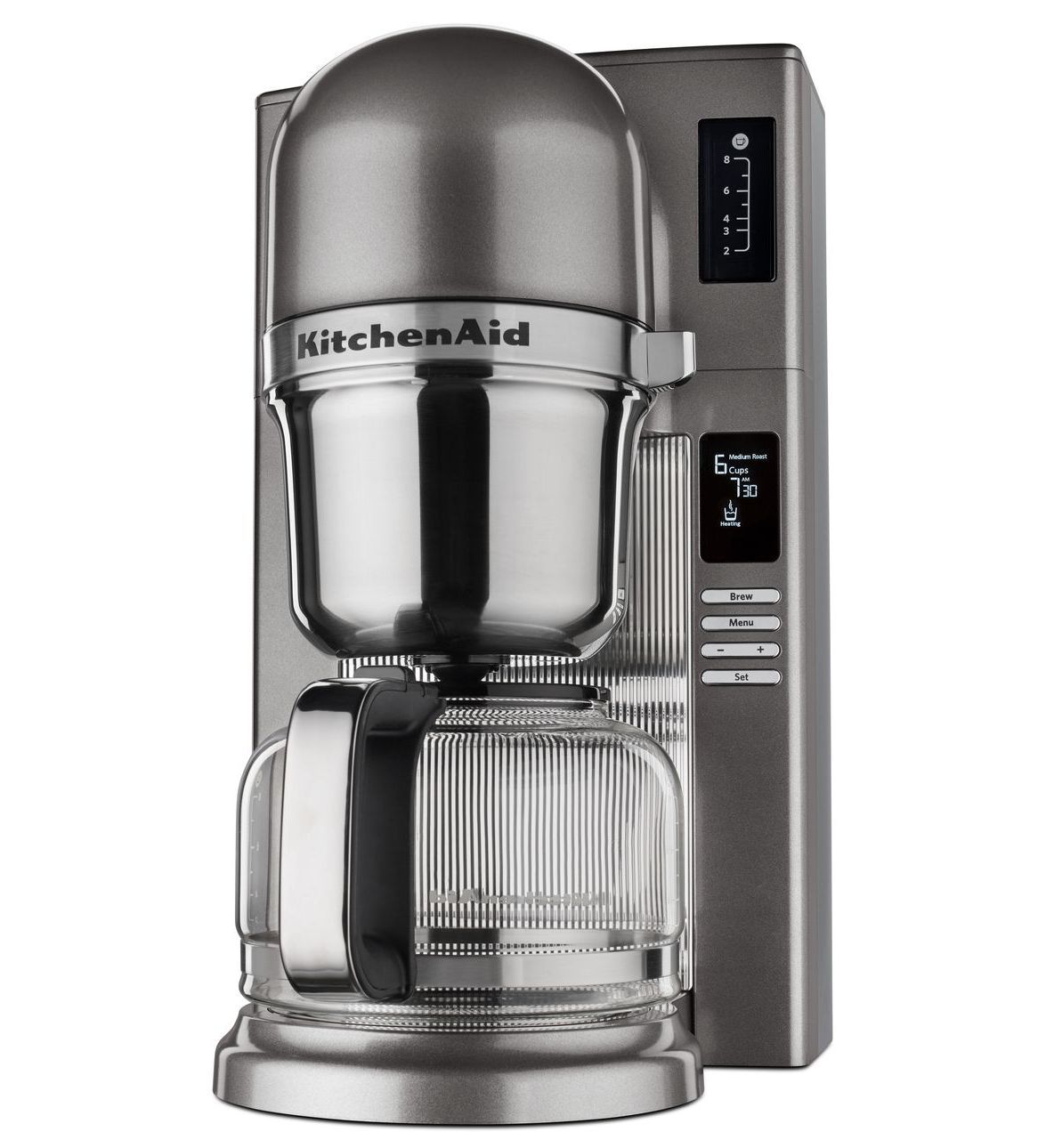 This KitchenAid model, which doesn’t come with a built-in grinder, is meant to reproduce a pour-over method with some additional perks: unlike the Bonavita, for instance, the KitchenAid tracks and displays the progress of your coffee from heating the water, to pouring, to steeping in a digital display. From a distance the KitchenAid looks like a refined machine, but get a little closer and you see it for what it really is: a coffee maker that costs over $200, but feels cheap to the touch and produces watery coffee. The grounds also overflowed from the basket and made a mess, although we had followed the instructions provided.