Disney Playmation makes me wish I was 10 years old again

I was a little kid when Return of the Jedi came out, so I did what any kid would do: endlessly re-enact scenes from the movie until my parents went mad. My favorite game was “Sarlacc Pit,” in which I would hang onto the top of the stairs and pretend to be pulled down into the depths of the sandy beast where I would slowly be digested over the course of 1,000 years (or until it was time for dinner). There was something simple and satisfying about physically re-enacting those scenes, and while video games eventually came to dominate my free time, quick-twitch and puzzle games never pushed the same buttons as simply recreating my favorite movie moments.

Today Disney announced Playmation, its new toy line that will be launching later this year, and at first glimpse I thought it was something similar to Disney Infinity: a mash-up of physical product and video game that, while interesting, was something we’d all certainly seen before. Then I got a chance to try it out, and now the 10-year-old inside me is flipping out.

I used what is essentially the Disney Playmation starter kit, which includes the Iron Man “repulsor” arm piece, two base stations (called “power activators” in Playmation parlance), and two action figures: Captain America and the villainous Iron Skull. I slid my arm into the repulsor arm piece, tightened it down to a snug fit, then tried a few of the weapon options at my disposal. My thumb triggered a laser hit, while holding up my palm and sliding the lower half of the arm piece shot off a repulsor blast. When I say “shot off,” I mean the repulsor arm piece made an appropriate sound and slightly vibrated to make it seem like I was doing something. It was simple but surprisingly satisfying. But that’s a boring, one-off action out of context — what was fun is when you actually have to perform a mission.

Given that it’s primarily aimed at kids, Disney first demoed the product for journalists with, you know, an actual kid playing it. That mission was a battle in the jungles of Wakanda (Marvel fans, you know what that is; everybody else, it doesn’t matter). The two power activator stations served as both the source of “bad guys” and also a place where the player could perform additional activities like set explosions. The voice of JARVIS set up the mission for the player, and she walked around the demo room — decorated as a kid’s bedroom — as she “explored” the jungle. The power activators were able to track her motion through the room via IR, and when the sound alert came that villains had spotted her, she jumped behind the bed to shield herself from the attacks, and popped up to fire blasts at the bad guys, which were represented by color-changing lights on the stations. 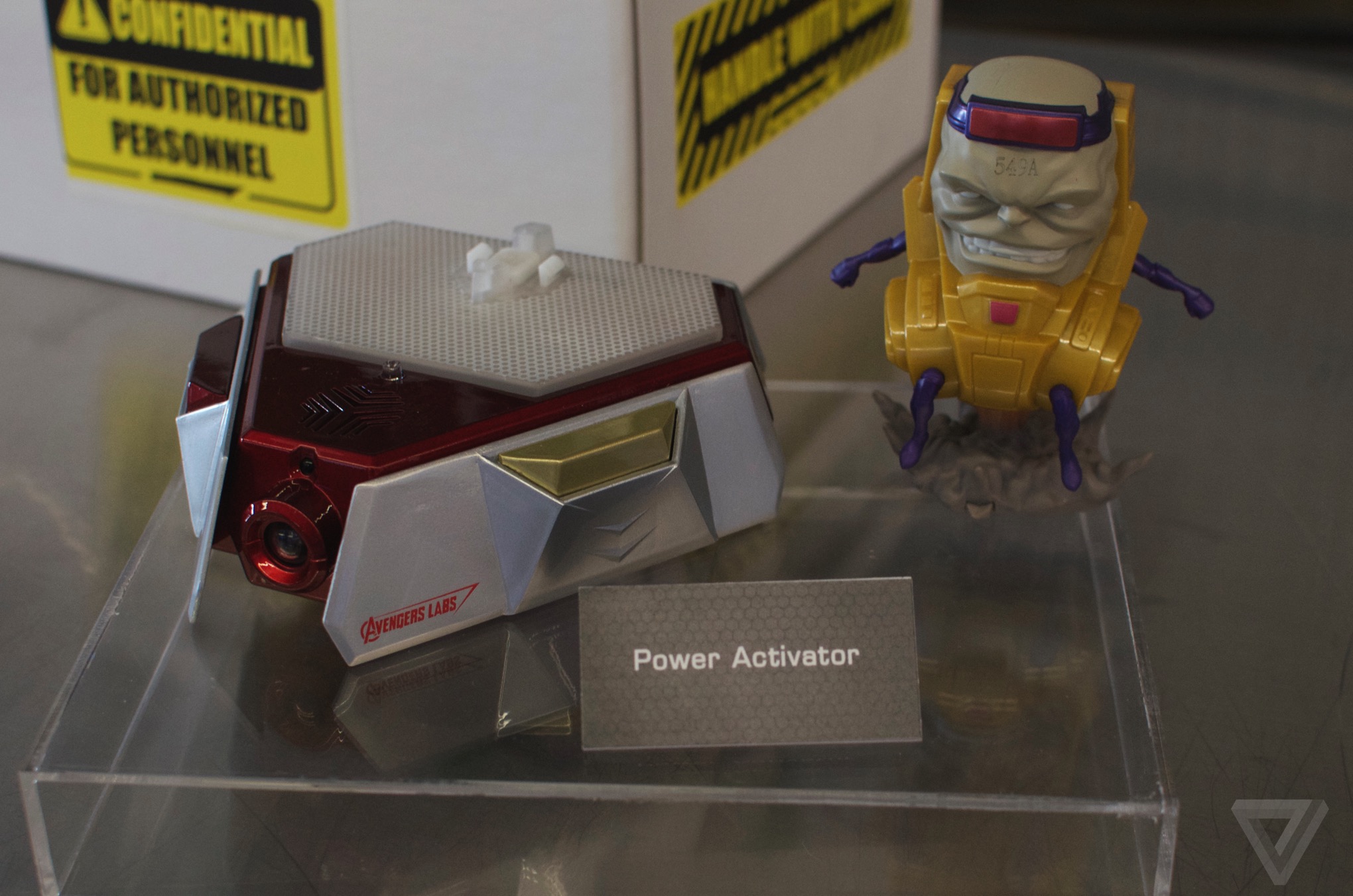 To complete the mission, she had to take down multiple bad guys, then set an explosive at the station. The voice narrating the mission warned her to clear the blast radius — she actually had to physically leave the room to avoid taking damage — and after she’d finished the arm piece, it let her know how she’d done and that she earned a power-up (in this case, a freeze blast).

The joy is in physical play, not staring at an iPad

Afterwards she was able to sync up with the mobile app, which provides a secondary means of tracking progress, comparing scores with friends and downloading additional missions. But rather than being the heart of the experience, the mobile app is an add-on that seems almost superfluous — the joy seemed to be clearly in the physical play, not staring at an iPad. But just to make completely sure, I volunteered to try Playmation myself.

My mission was to fight Iron Skull, so they brought out the Iron Skull figure and placed him on top of one of the power activator stations. I had my brief weapons training, and the mission kicked off. I shot at Iron Skull; the power activator flashed red to signify a hit. Before he could strike back, I hit him with a repulsor blast. Then the color of the activator changed again, signifying that he was getting ready to fire. I tapped a button on the arm piece, activating my shield, and turned my arm around. That’s when I surprised myself, dropping to my knees to hide behind the protective force field. 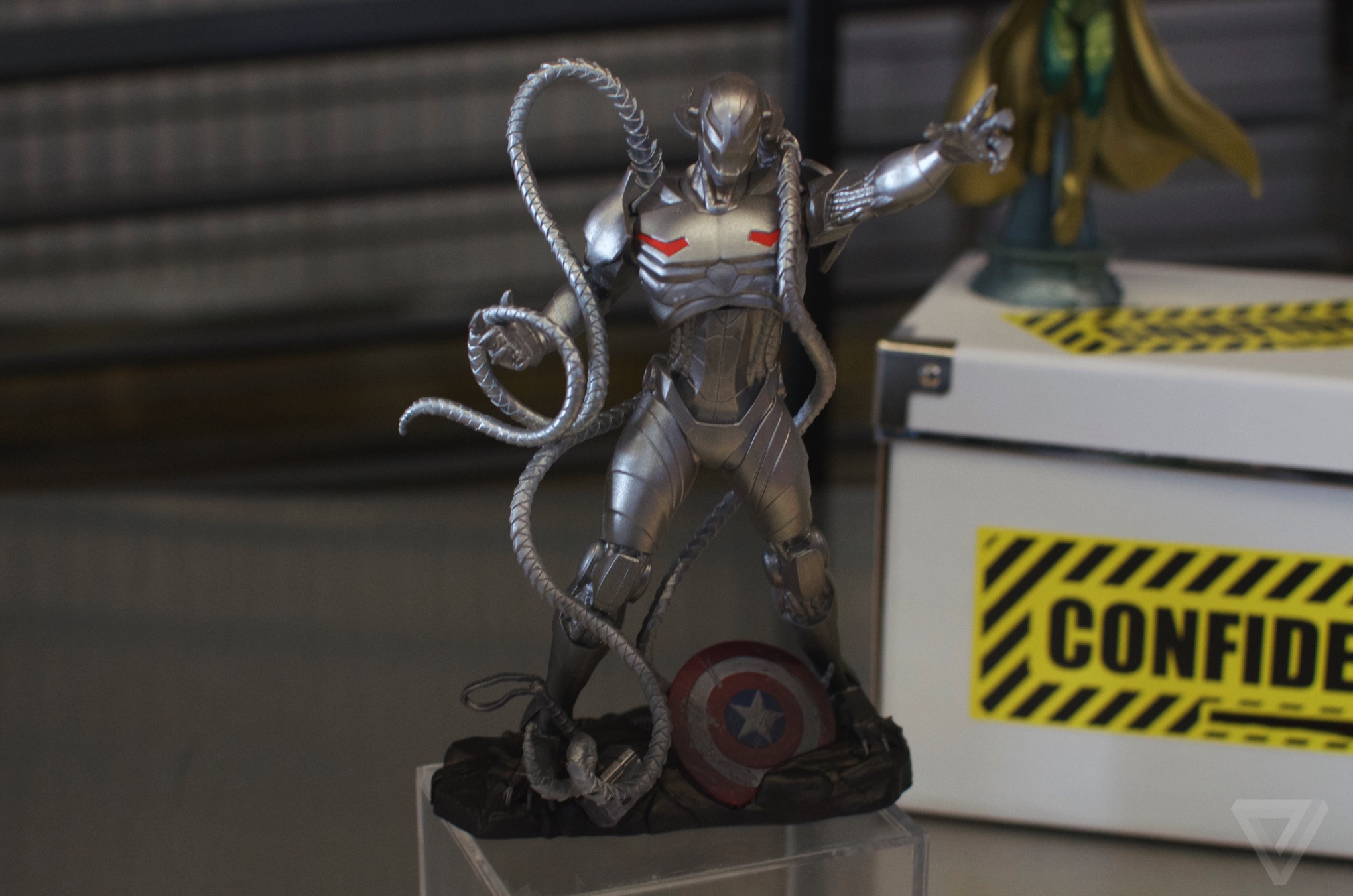 It was immediate, instinctual, tapping directly into some primitive kid-brain where playing make-believe is as automatic as breathing. I might as well have been hanging off those stairs again, warning Han Solo to aim just a little higher.

When I finally beat Iron Skull, the power activator popped up, knocking the figure off its perch. The game congratulated me on my victory, telling me it was the quickest Iron Skull had ever been defeated. Was it lying? Probably. Did my 10-year-old self care? Not at all.

Disney Playmation goes up for preorder on July 7th, with the product shipping and hitting stores this October (Bruce Banner fans can pick up a set with Hulk gloves in November), and I can’t say this is something I’d buy myself. The repulsor arm piece is just small enough to remind you that it’s intended primarily for kids, and I don’t know how much my girlfriend would love me running around the living room and hiding behind the couch so I don’t get shot by some mysterious Marvel villain. But for kids — or parents — that want to augment “playing superheroes” with some great props and clever missions, there’s an awful lot to like about what Disney and Hasbro are doing here: enhancing play in the physical space, instead of replacing it with a computer screen.

Of course, Playmation for Star Wars is coming next year, and if there are lightsabers involved I won’t be responsible for my actions.