Another inexpensive phone that competes way above its class

Can a $300 smartphone stand up with the best Android devices out there from heavyweights like Samsung, LG, and HTC? That’s what Asus is trying to answer with the ZenFone 2. It’s not alone either — a whole host of smaller smartphone manufacturers are trying the same thing this year. Similar to the Alcatel Onetouch Idol 3 and OnePlus One, the ZenFone 2 from Asus makes a strong case that it’s not implausible. In a year that’s produced some of the best flagship smartphones we’ve ever seen, these smaller players are trying to win by pairing an appealing price with surprisingly robust performance. In Asus’ case, a low price tag and unproven processor could be seen as handicaps, but they don’t hold it back from hanging with the big guns.

On first impression, the ZenFone 2’s budget price is painfully obvious. The phone's design is basic in every sense: it's a plastic phone that feels like plastic. If you've picked up any LG-branded smartphone over the past couple years, you'll have some clue of what to expect. The rear shell is textured and offers a nice grip that never had me worried about fumbling it, but if the goal was to invoke metal, Asus missed the mark.

Perhaps handcuffed by its $200 starting price, the ZenFone 2 just can't match some of the flashier designs we've seen from other Android manufacturers lately. There's no curved screen, no metal finishes, and upon picking it up you're greeted by a pretty large chin bezel beneath the display. It’s not a head-turning or envelope-pushing design — it’s mostly just generic. Three capacitive menu buttons add significantly to the phone's height, and these keys bizarrely don't light up, which is one cost-cutting shortcut I wish Asus hadn't taken. 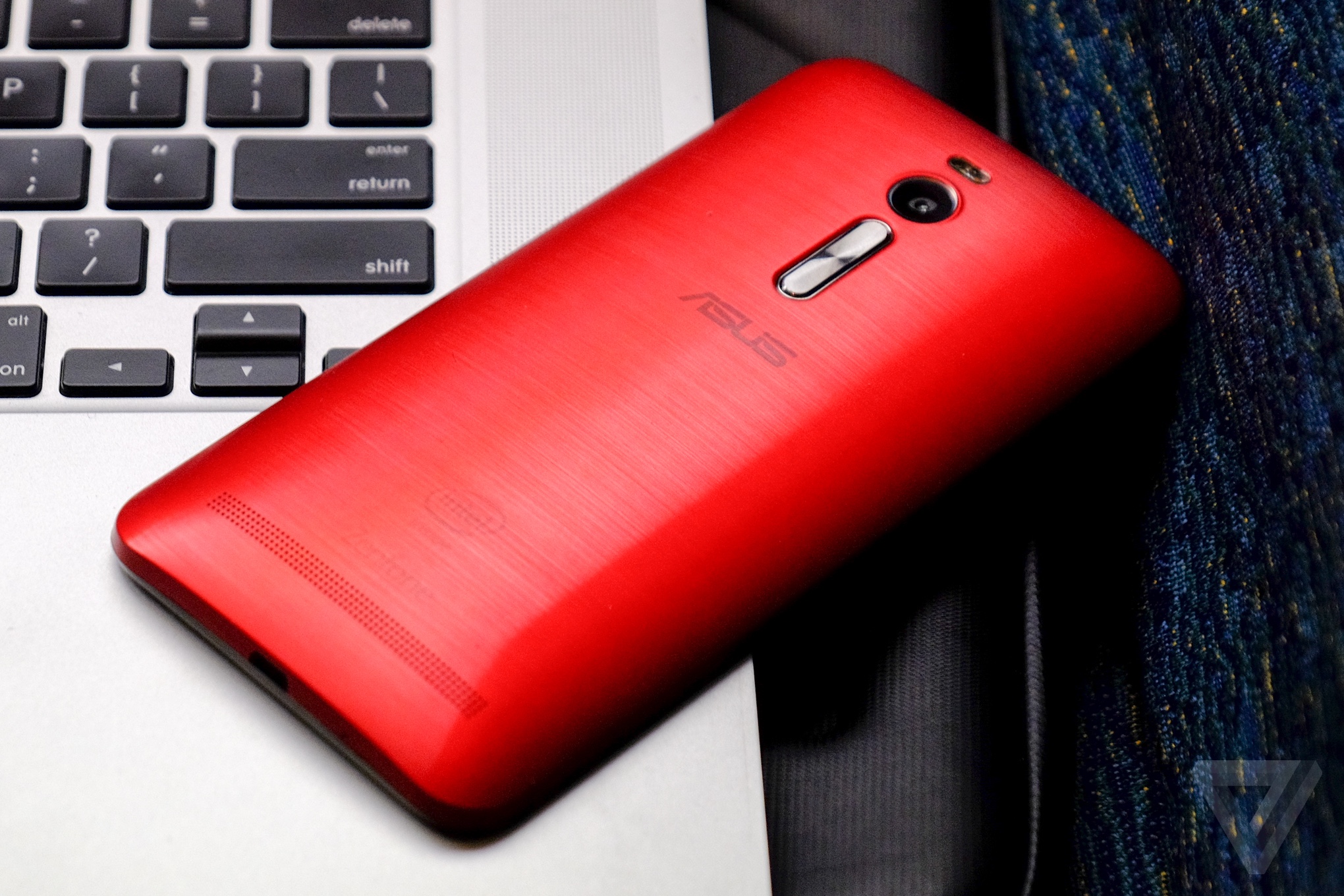 The 5.5-inch display itself is nice, but also pretty dim. Colors from the 1080p panel are accurate if a bit washed out (a "Vivid" display setting helps boost saturation), and viewing angles leave nothing to be desired. Sure, the ZenFone 2 is outclassed by Apple, Samsung, LG, and HTC, but their devices cost hundreds more. The ZenFone 2’s screen will do fine for gaming, YouTube, and so on. The only real problem is brightness — or lack thereof. The screen fails miserably outdoors on a sunny day, and even in well-lit rooms I found myself cranking the ZenFone 2 up to around 80 percent and above. And it must be said that other companies have done better at making quality displays for around the same price point; Alcatel’s Onetouch Idol 3 has one of the best 1080p screens we’ve come across.

Asus has made some poor design choices 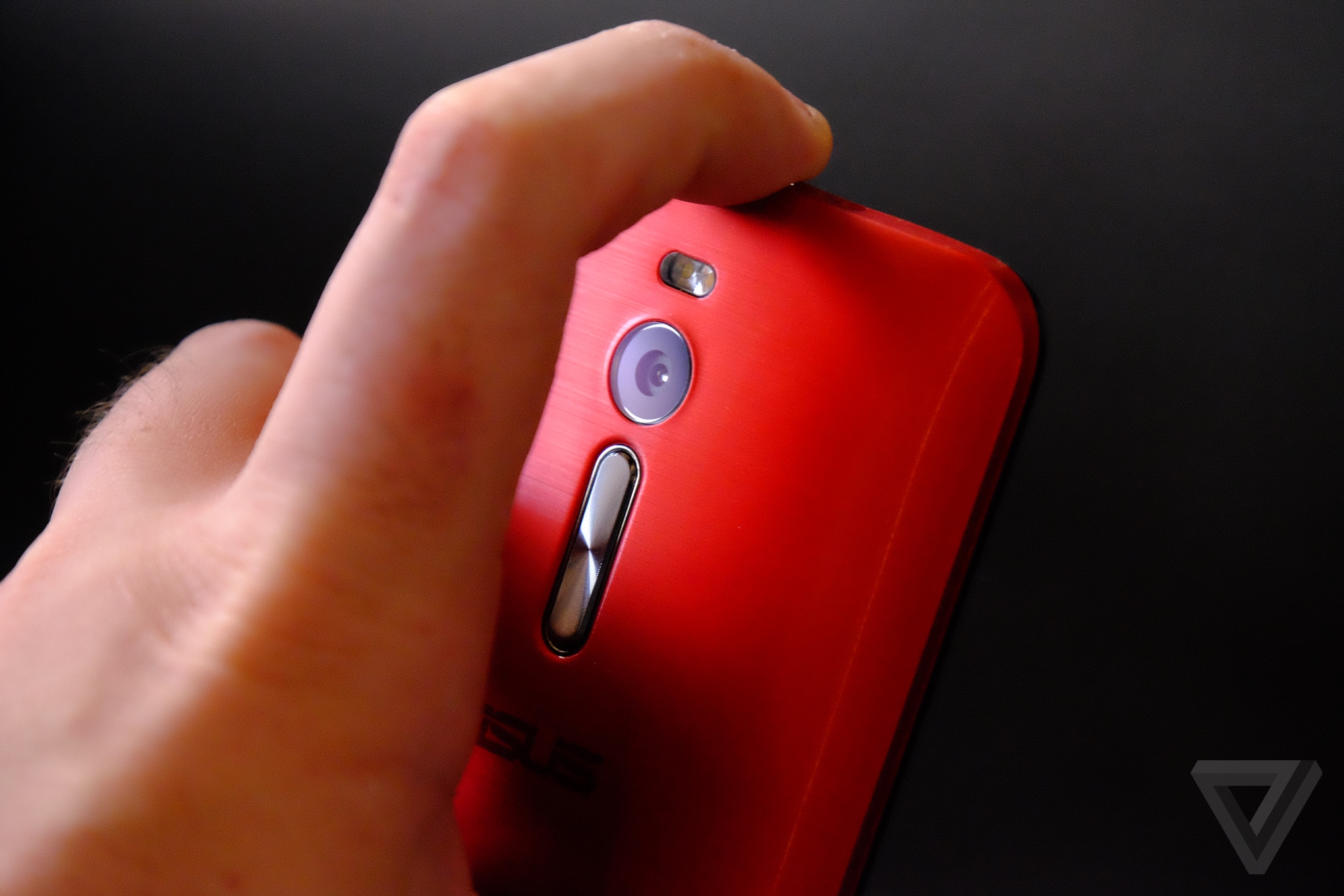 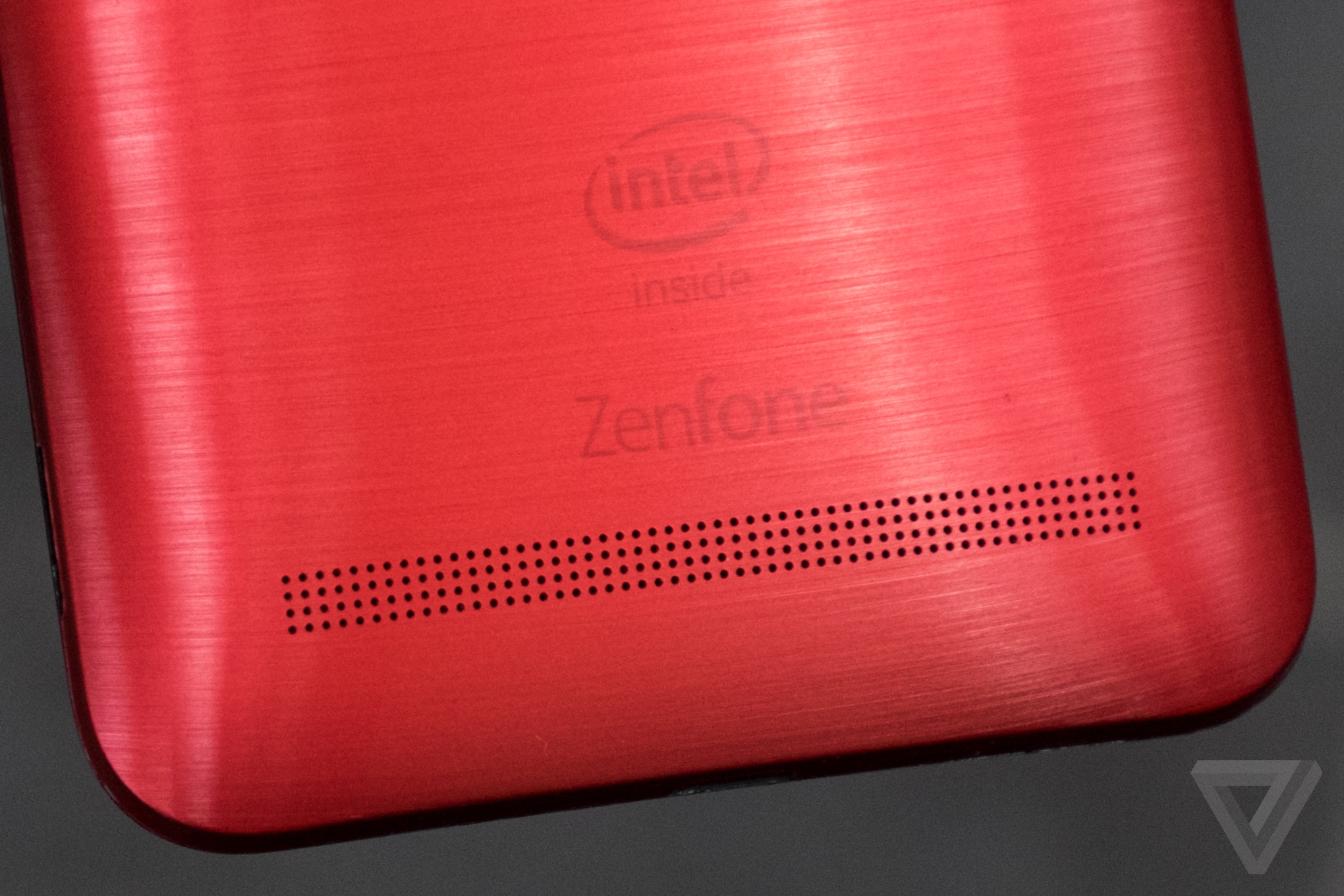 Asus borrows another LG idea on the back of the phone with its rear-mounted volume rocker. There are mixed opinions on this idea, but at least LG’s version works, which can’t be said for Asus’. The volume buttons on the ZenFone 2 are way thinner than on any LG smartphone, and there's no power button sandwiched between them. Easily the worst aspect of this phone's design is where Asus decided to put that power button; it's centered at the very top of the device. I almost always had to adjust my grip to reach it, and even then it requires a firm press. Fortunately, I rarely have to bother with the button: Asus does offer tap-to-wake and tap-to-sleep gestures. The software also lets you draw letters on the screen to open your favorite apps. "C" launches the camera, and I set up "S" to work with Spotify and a lower-case "e" to trigger Gmail. These features work well when you remember that they're there, but most of the time I didn’t.

One misleading thing about the phone's outer design is the big speaker grill on the rear. Based on looks alone, you'd expect the ZenFone 2 to rival many devices on the market in sound output. But remove the back case and you'll see the truth: all you're hearing is a pretty measly (and tinny) speaker. This isn't really a phone that can double as a music speaker; even watching Netflix is questionable. You're just better off plugging in headphones. 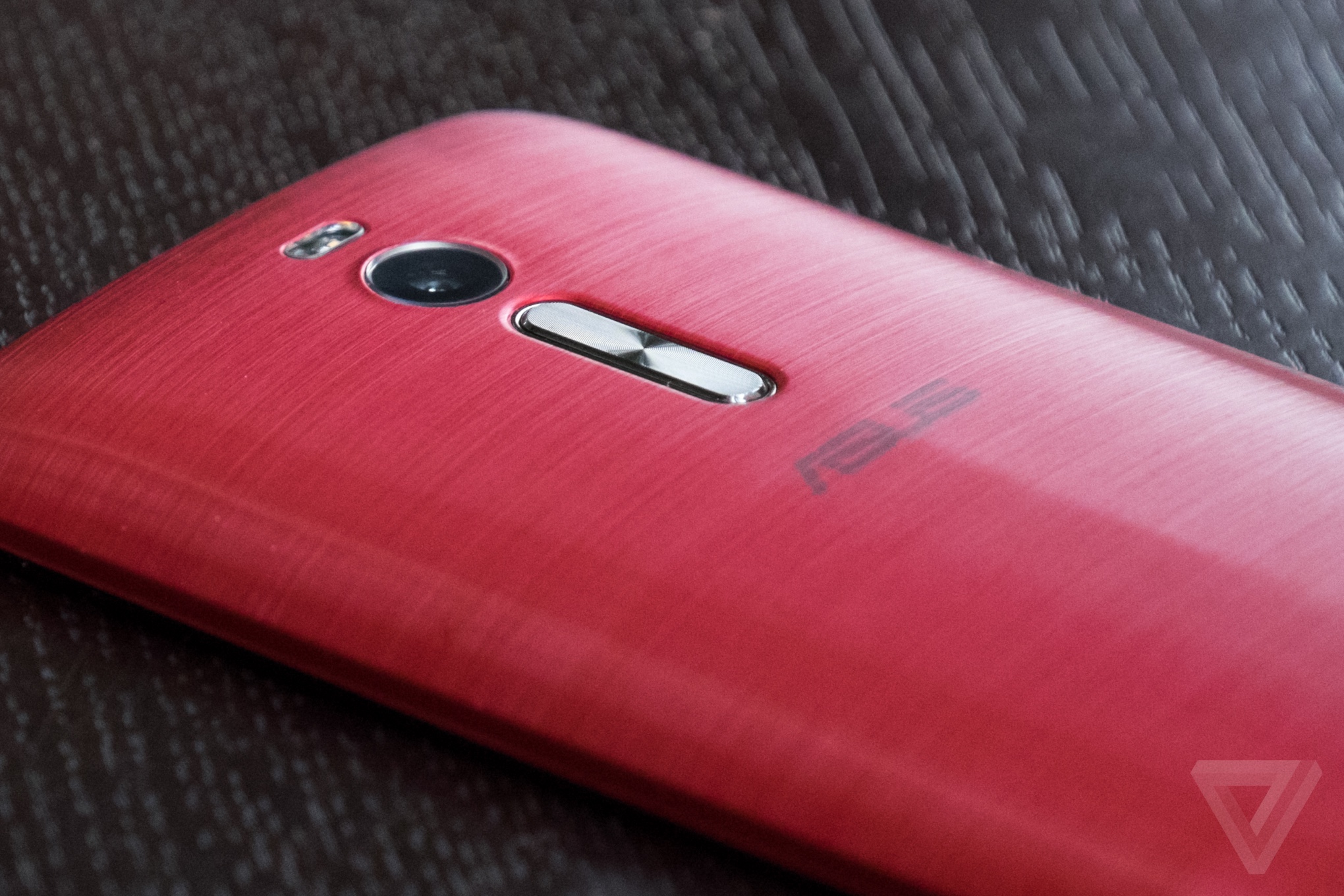 As for the 13-megapixel camera itself, it’s pretty run-of-the-mill. Daytime shots are satisfactory, but Asus layers on extra sharpening that can do more harm than good. There’s no optical image stabilization built in, so low-light shots contain some blur unless you use the ZenFone 2’s low-light mode. The resulting images are much brighter and can capture scenes where other modes see nothing but black. Unfortunately, this option downsizes your shots to just 3 megapixels (a process known as pixel binning), and they also contain a healthy dose of noise.

Asus has included a swath of other shooting modes, too. There are 18 in all, including a decent HDR option and Super Resolution mode that combines four 13-megapixel images into a single 52-megapixel shot. But the camera’s output doesn’t really justify these extravagant software features, and Super Resolution photos don’t look discernibly better or sharper than what you’d get from Auto mode. While the camera is generally fast and thankfully avoids shutter lag, it can also sometimes take a bit to get you back to the viewfinder between shots. If camera quality is your most important criteria in selecting a new phone, the ZenFone 2 won’t top that list.

But design complaints and camera issues aside, the ZenFone 2 shines when it comes to performance. This $300 phone breezes through every task you throw at it. The ZenFone 2 handled everything with aplomb: multitasking, playing games, and general everyday usage caused no issues whatsoever. It felt no different from many existing Android flagships, a notion that may stir some panic inside Qualcomm and Samsung. If nothing else, this device proves Intel is totally up to the challenge of powering a modern smartphone experience. The ZenFone 2’s abundance of RAM (4GB in the high-end version) probably helps out, too. Call quality, LTE data reception on T-Mobile, and Wi-Fi performance were all perfectly adequate, as well. 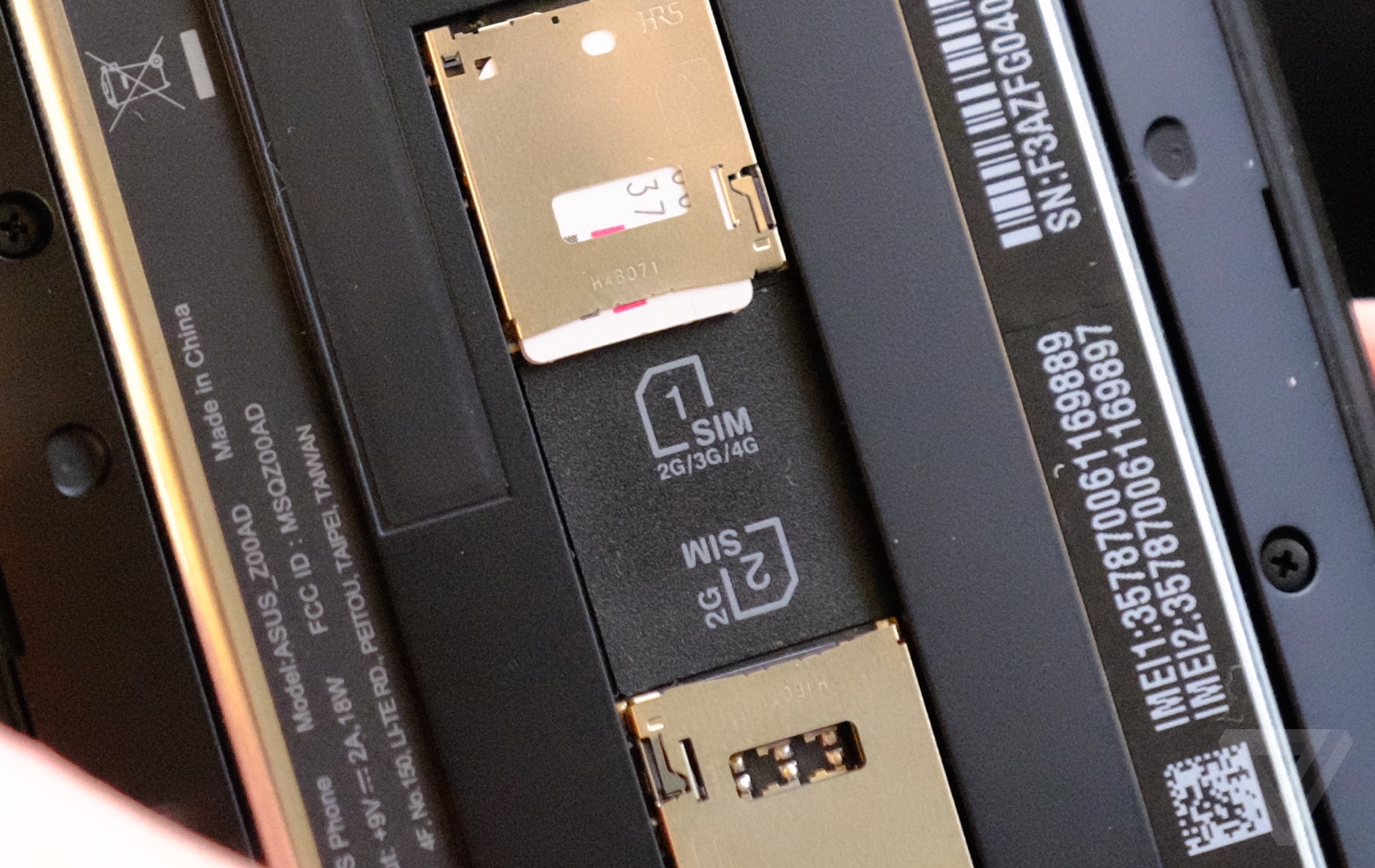 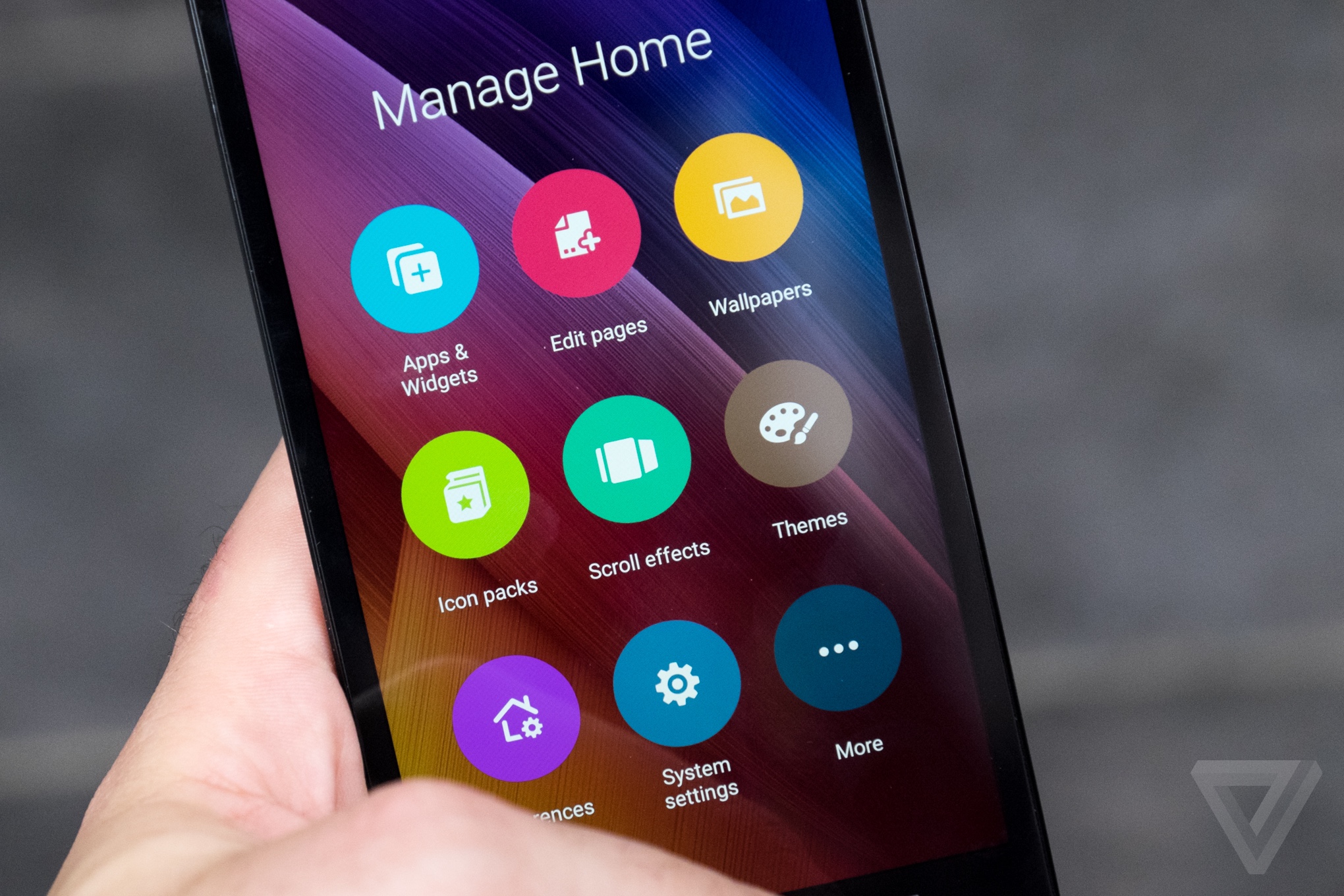 The ZenFone 2 runs Android 5.0 Lollipop, but it’s topped with Asus’ ZenUI skin. It’s a heavy customization of Android by today’s standards, and a different approach from what Alcatel is doing. Still, ZenUI has some pretty advanced features that could satisfy power users.

Installable theme packs make it easy to change up the software’s appearance (which isn’t awful out of the box but doesn’t mesh well with Google’s own design for Android), and you can choose different transition animations for the home screen. It doesn’t take much to get the ZenFone 2 looking great, but you’ll definitely want to replace the stock messages, calendar, and gallery apps with Google’s superior alternatives. Asus’ stock versions just aren’t particularly good.

Customizability doesn’t excuse Asus’ other software faults, however. Out of the box, the ZenFone 2 comes filled to the brim with bloatware and a ton of useless in-house apps. It’s the most egregious example we’ve seen in a long time, and in going so overboard, Asus could quickly overwhelm novice users. I could stand about five minutes of CleanSweep scanning every app I installed for malware — something Google Play already does, mind you — before I disabled that and every other junk app, such as Omelet Chat. I ended up hiding away almost 40 of the apps included out of the box. That’s just ridiculous. 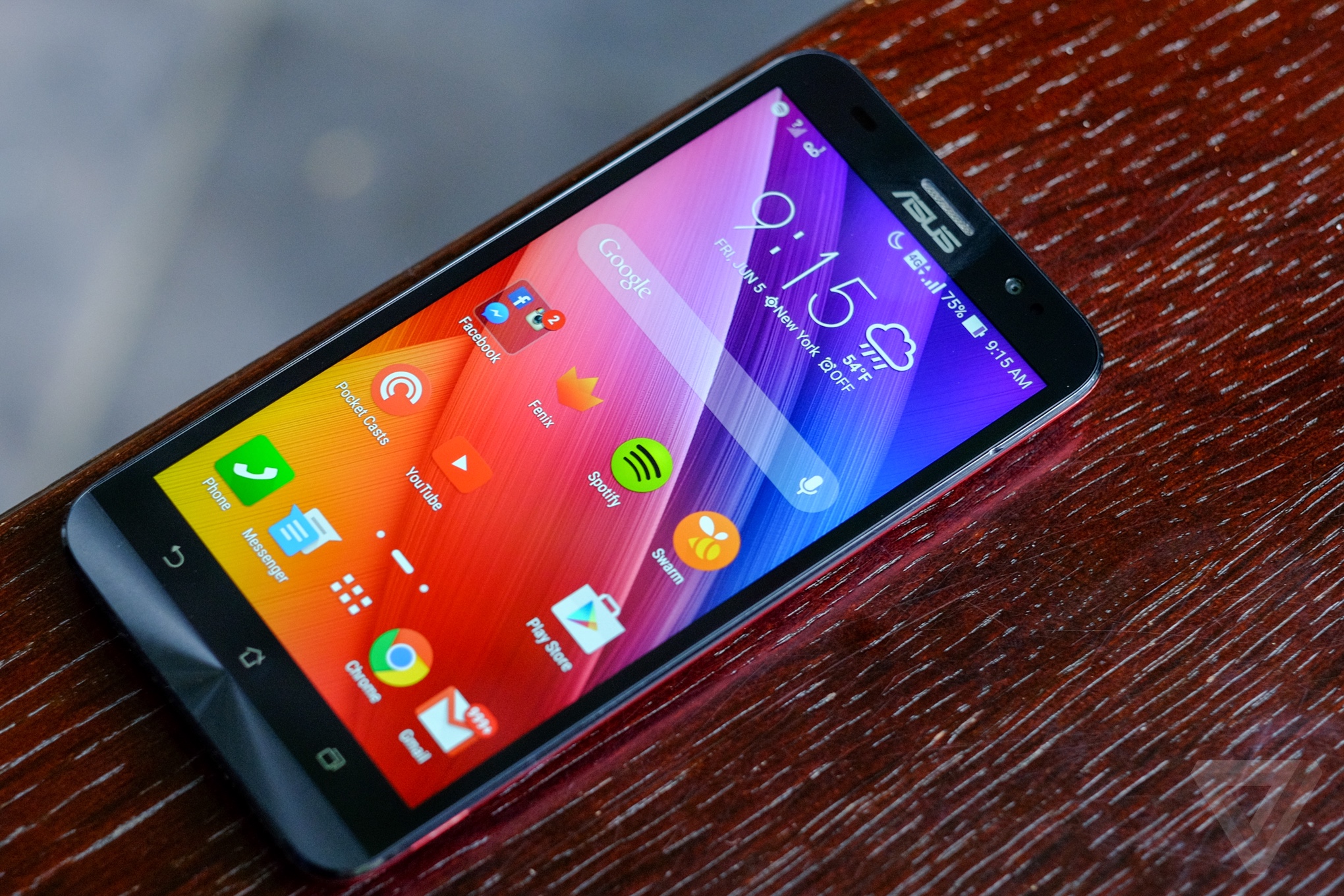 Battery life was a mixed bag. On most days, the ZenFone 2 made it through the full workday without issue and had a small reserve left waiting at night. But there were others where the phone neared the red line much sooner — and that was without me pushing it particularly hard. There’s at least one positive: the ZenFone 2 supports quick charging and goes from zero to 100 in about 1.5 hours. Even so, the ZenFone 2 should offer much better longevity when off a charger and falls short of the OnePlus One, a device that shares its screen size and has a similar battery capacity.

If you put some effort in, the Zenfone 2 can be a great phone

With all of that said, the ZenFone 2 still makes for a fantastic package considering what you’re paying. I’d recommend the $300 model over its $200 counterpart thanks to the faster processor, more storage, and the bundled quick charger. When you step back and look at the bigger picture, Asus has built a device that often does stand toe-to-toe with today’s far more expensive flagships — or at least comes close enough.

Camera performance and battery life fluctuate between average and disappointing, and the screen might not leave you in awe. But everything else about the ZenFone 2 gets a thumbs up. The experience of actually using it proves incredibly fast, reliable, and satisfying thanks to Intel’s processor. And when you rid the ZenFone 2 of all the crapware that Asus stuffed into it (and install your favorite third-party launcher), you’re left with a wholly capable smartphone that costs half what you’d pay for a Galaxy S6, HTC M9, or LG G4. In the end, Asus’ biggest achievement is exactly that; it’s not better than any of those flagships, and it requires some work on your part to get the best out of it, but mentioning the $300 ZenFone 2 in the same sentence isn’t as crazy as you’d think.