Sometimes it's hard to tell what an animal looks like when it's been extinct for over 400 million years — just ask Hallucigenia. Scientists have studied the thumb-sized worm for more than 50 years now, and have only just discovered which end is the head.

A new model for the creature includes a ring of teeth around its mouth, a simple pair of eyes, and a foregut lined with tiny little teeth. The discovery means that Hallucigenia not only makes sense now — it’s also way scarier than we thought.

A weird and wonderful history

In 1977, British paleontologist Simon Conway-Morris came across a very weird-looking fossil. It had been found in the Burgess Shale, in the Canadian Rockies, 66 years prior. And the people who found the 0.5-inch long fossil had classified it as an annelid worm — worms that include leeches and earthworms. But when Conway-Morris took a look at it, he begged to differ. As far as he was concerned, this organism had walked on seven pairs of stilt-like spines, all while waving around the seven wacky tentacles on its back. Conway called it Hallucigenia — since it seemed like something a person might dream up during a trip gone wrong 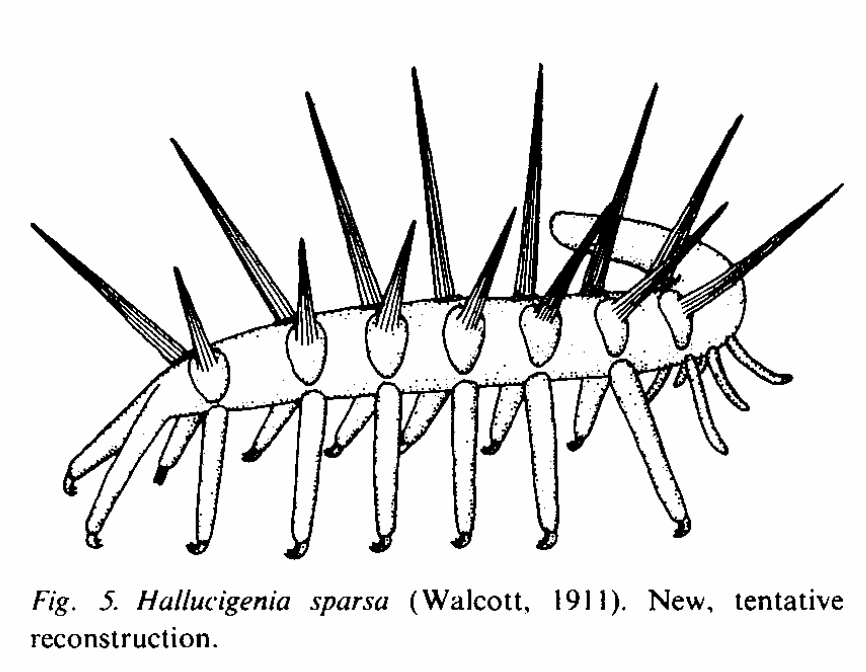 Conway-Morris’ model was controversial, but it stood until 1991. That year, researchers Lars Ramskold and Hou Xianguang discovered fossils in China belonging to a related animal called Microdictyon — fossils that made Conway-Morris’ mistake quite clear. These animals sported plates instead of spines on their back, which made it easy to identify their "tentacles" for what they truly were: legs. Conway-Morris had been looking at Hallucigenia upside-down the whole time. So, the scientists flipped it.

One mystery remained, however. Which end housed Hallucigenia’s head? Conway-Morris figured it was the blob-like structure located at one end of the Burgess Shale fossil. But in 1992, Ramskold suggested that the blob might just be a stain that was made when Hallucigenia died; the stain was created when "decay fluids" seeped out of the animal upon its death. Beyond this suggestion, however, it was hard to definitely tell which end of the animal was which — until now, that is. 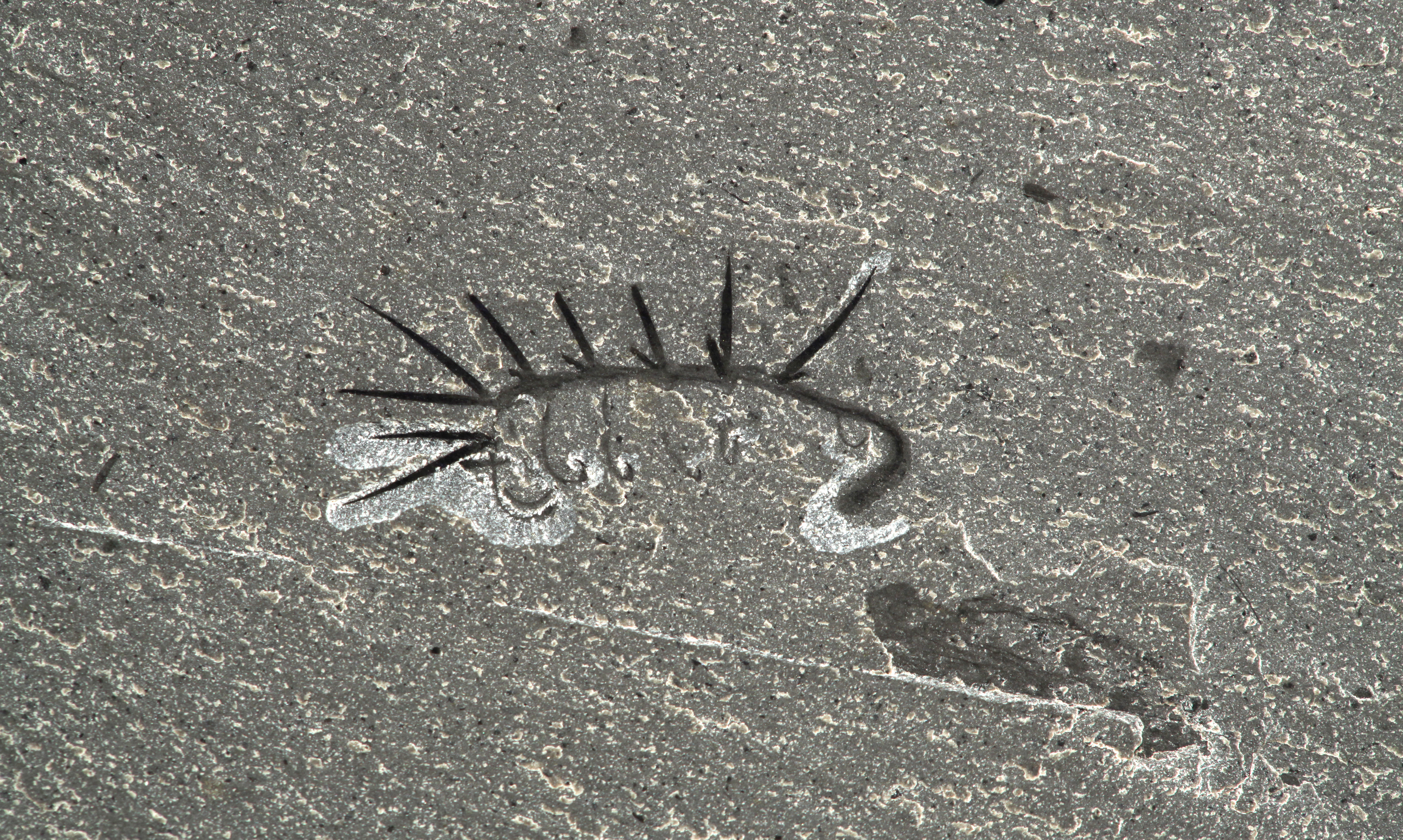 A model for all time

"When we put it in the electron microscope, we saw not just the pair of eyes, but also this big smile of teeth grinning back at us — and that really resolved for all of us not just the position of the head, but all of the detail in that as well," explains Martin Smith, a paleontologist at the University of Cambridge and a co-author of the new Hallucigenia study, published in Nature today.

Based on their analyses, Hallucigenia not only sported long spines on its back — spines that were probably used for defense, Smith says — but teeth around its mouth, a pair of simple eyes, and teeth inside the throat-like area of its gut, to aid in digestion. The scientists now also have a much better idea of how its limbs and spines were constructed.

"Not just the pair of eyes, but also this big smile of teeth grinning back at us."

Because of these newly identified features, it’s now possible to imagine how Hallucigenia interacted with the aquatic world surrounding it, 508 million years ago. "It wouldn’t have had clear vision," Smith says. Hallucigenia lived deep underwater, where light is scarce. It was probably about to make out organisms swimming overheard, and their shadows. "It would have been able to tell day from night," Smith says.

Scientists don’t know what Hallucigenia ate, but the mouthparts hint at a kind of suction mechanism. "The ring of teeth around the mouth were probably involved in sucking water and food into the gut," Smith says, adding that the teeth inside the "throat" area would have kept the food from moving backwards. "It just sucked whatever it could; it wasn’t chewing stuff."

As for its floppy legs, it’s entirely possible that they were too flimsy to really help Hallucigenia "walk," Smith says. "You can imagine him hugging or clinging onto a sponge or a seaweed or something like that, and climbing up the sponge and feeding on that."

While it clung to sponges, its spines provided some protection. "There were probably some quite nasty predators swimming around," Smith says. Scientists have discovered fossils of predators such as squids and "lobsters crossed with can openers" that were "really sort of bizarre and quite fearsome," Smith says. Predators that went after Hallucigenia may have received a nice stabbing in return.

"You can imagine him hugging or clinging onto a sponge."

Hallucigenia wears its name well; it’s a floppy hallucination and a complete blast from the past. But the physical features described in Nature today represent a lot more for biologists than you might expect. They can be used to clear up some pretty big questions regarding the evolution of "Ecdysozoa" — "one of the most large and diverse animal groups on the planet," Smith says.

Prior to this discovery, similar genes and the ability to molt were the only features that united animals like hookworms, tartigrades, and spiders. Now, it looks like the plates around Hallucigenia’s mouth — teeth that are featured in some worms — and the teeth lining its gut, which appear in some crustaceans, can also be used to link the three. "What Hallucigenia has shown us is a physical, anatomical feature that unites this entire group," Smith says. Certain subgroups simply lost these features as time went on.

"This major discovery is what makes it a really significant paper," says Peter van Roy, a paleontologist at Yale University who didn’t take part in the Hallucigenia study. "It shows that these circular oral plates is a character of Ecdysozoa, in general." In short, they didn’t pop up independently. These features would have been present in the last common ancestor, as well.

Advances in microscope technology made this new model possible, Smith explains. To reach this model, Smith and his colleague, Jean-Bernard Caron, observed more than 100 Hallucigenia fossils unearthed in national parks, using electron microscopes. Electron microscopes use beams of electrons to illuminate a specimen. A few years ago, using one would have meant spraying irreplaceable fossils with gold particles that can conduct electrons, Smith says. "That wouldn't have gone down particularly well." Today, paleontologists can use a very fine mist of water instead. "You don’t have to damage fossils at all," Smith says.

But if advances in technology are the main reasons this model was created, what’s stopping even better microscopy techniques — or better fossils, for that matter — from coming along and turning this into yet another butt-to-face fiasco?

"I'm pretty confident that this is what the animal looked like."

"Our knowledge will always improve, and no doubt there will be small adjustments, but I'm pretty confident that this is what the animal looked like," Van Roy says. The researcher has access to a lot more data than previous groups did, and "our knowledge has been developing since the 1990s," he says. Hallucigenia, in its current form, "makes sense."

"In terms of its actual biology, we still know a lot less about them than we would if it were alive today," Smith concedes. But overall, "we've got a pretty good understanding there — I don't think this is something where we are going to find out that the head is the tail."

Scientists rarely get everything right the first time around. Fortunately, science is self-correcting. It may have taken half a century, but researchers might have finally gotten this weirdo right. Surely, we can bask in the glory of its strangeness for a spell.

"We’ve known this animal for over 100 years, and it just sort of seems wrong that we didn’t know which end was the head and which end was the tail," Smith says. "Even just finding out where the head was was quite exciting, so the fact that it's also key to unlocking a recognized, but poorly defined group… that was really the icing on the cake, I suppose."

Verge Video: Can we bring animals back from extinction?
Back to top ^