I wasn’t able to get into collectible card games until I played Hearthstone. Blizzard’s digital take on card games took what always felt to me like an overly complex genre, and streamlined it so that basically anyone could play; matches were quick, rules easy to understand, and most importantly it was fun from the very beginning, while still offering deep and engaging strategy. I play the game almost every day, and I’m not the only one who has found myself addicted: earlier this year Blizzard revealed that Hearthstone had more than 30 million players.

Now it’s trying to do the same for MOBAs — short for multiplayer online battle arena — the competitive strategy genre that has exploded in popularity thanks to games like League of Legends and Dota 2. With Heroes of the Storm, which launched this week, Blizzard appears to have done just that: it’s a game that cuts out much of what makes the genre so intimidating, while keeping everything that makes it so fun.

And just like Hearthstone, it’s a game that has managed to lure me into an addictive new world. 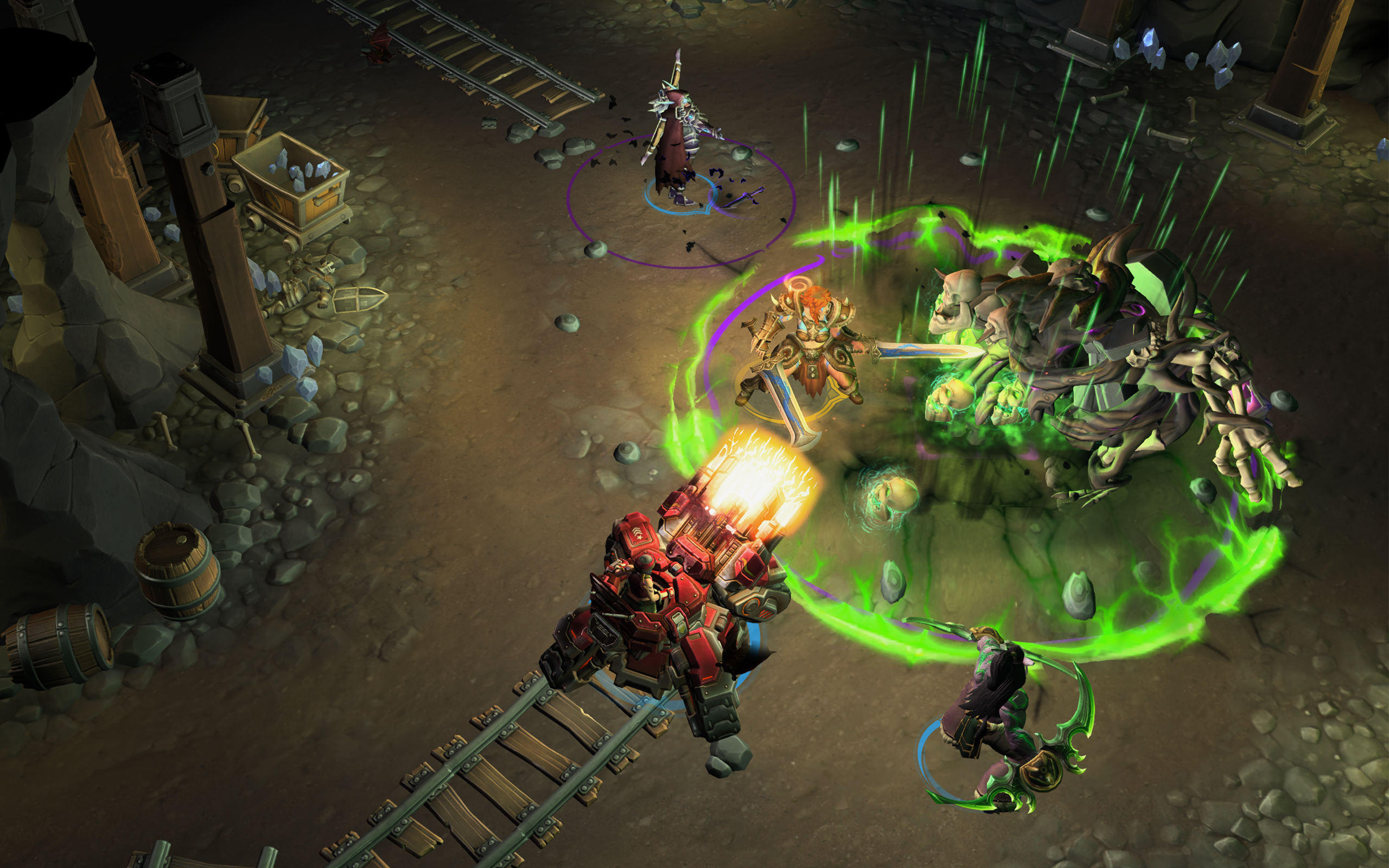 MOBAs are the most popular genre of competitive games in the world. League of Legends has close to 70 million players, while competitor Dota 2 has around 10 million. The games are the focus of major tournaments that feature multi-million-dollar prize pools, and Dota 2 was featured on the front page of The New York Times. But for all of their popularity and mainstream acceptance, MOBAs can be incredibly unwelcoming to newcomers. Even the name sounds hardcore. They’re kind of like real-time strategy games (think Starcraft) crossed with basketball. Two teams of five players do battle, each attempting to destroy the other’s base. Sounds simple, but there are all kinds of strategic wrinkles to master.

For starters, just picking who to play as is a challenge: League of Legends has more than a hundred characters, each with their own distinct playstyles to master. Meanwhile, in-game chats are filled with all kinds of complex jargon, and other players will often expect you to be a master even when you’ve just started out. It’s not the best system for easing in new players, and it’s the reason why people spend literally thousands of hours trying to master these games. It takes a lot of time and work to get to the point where it’s actually fun. But with Heroes of the Storm, it only took a handful of matches before I understood the appeal.

Much of what Heroes does is simply reduce the complexity inherent to the genre. The current cast of hero characters is relatively small, for example, making choosing one no more difficult than picking between Ryu and Ken in Street Fighter. (The cast is also a mash-up of characters from Blizzard games like Diablo and Starcraft, making this a bit like Blizzard’s own version of Super Smash Bros.) Similarly, the matches are significantly shorter than in other MOBAs; whereas games of League can go on for an hour, my longest Heroes match so far was around 20 minutes. For an online game that you can’t pause, length can be a huge sticking point.

And the changes go well beyond that. One of the unique aspects of MOBAs is how your character levels up over the course of a match. You can earn new upgrades and abilities to customize your fighter, and since these reset after each match, this lets you experiment with different strategies each time you play. But it can also be very confusing. In League, for instance, you can earn gold to spend at a shop to buy items that augment and upgrade your existing skills. But for newcomers it’s not really clear what these items do, and since you’re buying things in the middle of a match — when the clock is ticking and people are trying to kill you — it’s hard to make an informed decision. Heroes, on the other hand, simply lets you pick from a handful of new abilities when you hit a specific experience level; you know exactly what you’re getting at a glance, and the process of choosing them is simple and intuitive. 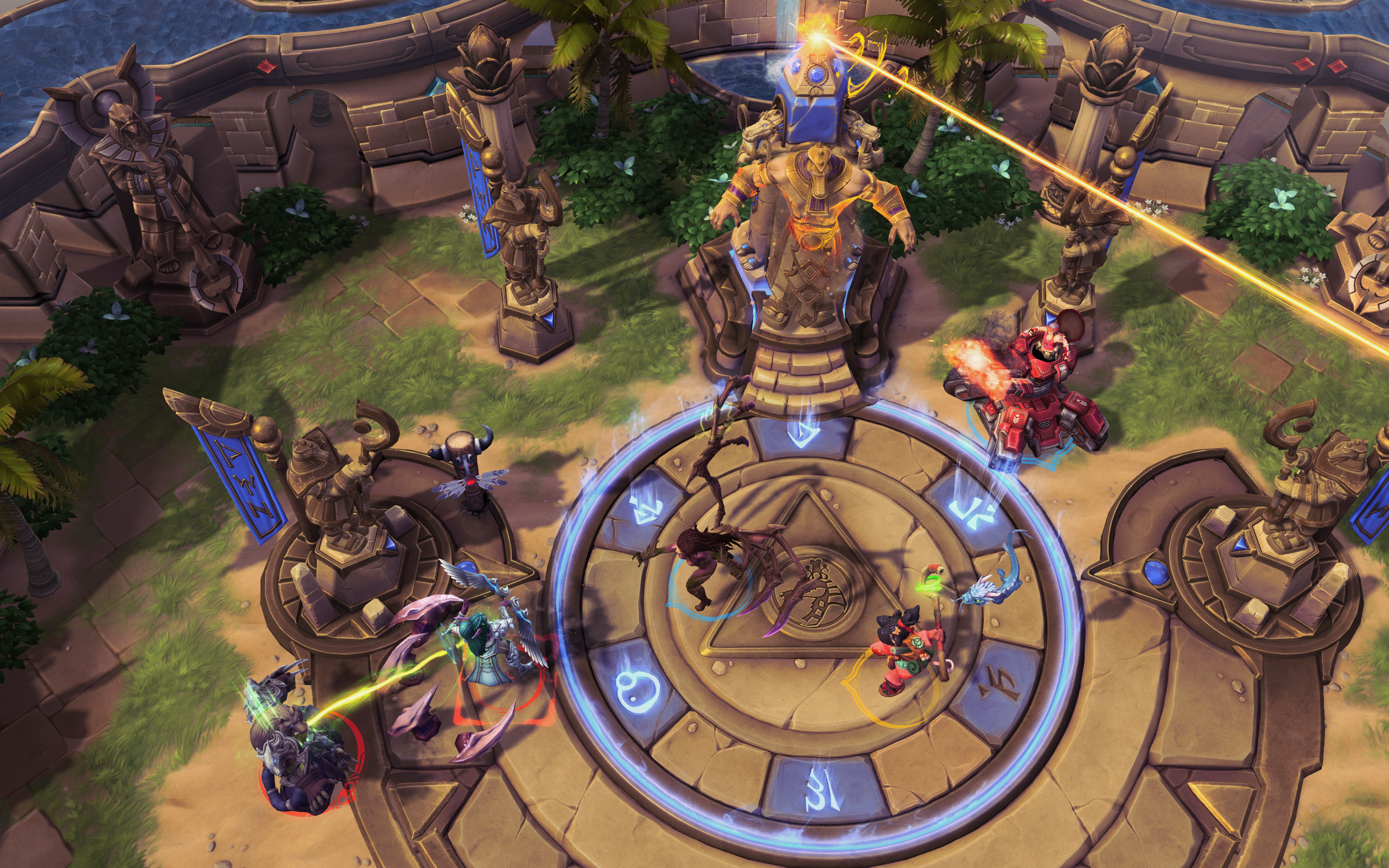 Heroes also makes some changes to the levels you’ll be playing in. MOBA maps are essentially all the same: they consist of three lanes with each team’s base on either side. Along those lanes are barriers and defenses you’ll need to break through in order to destroy the other team’s stronghold. The maps in Heroes are similarly laid out, but each includes some kind of gameplay twist that’s almost like a secondary objective. In one stage you can gather up gems to give as an offering to a spider queen, and the team that gathers the most will gain the temporary help of a huge monster. Each level has a different twist; they are all hugely helpful and can often change the outcome of a match. It’s like if in basketball one team was allowed to have a sixth player on the floor for just one minute.

The silence is a relief

Of course, these changes won’t appeal to everyone. The simplified character progression system will likely be too limited for hardcore MOBA fans, and the unique objectives for each map remove some of the purity of the game, putting a big emphasis on AI-controlled bonus characters. And just like Hearthstone, and Nintendo’s new shooter Splatoon, Heroes has no voice chat. This was never a problem for me — there’s text chat and a feature that lets you call for help if you need it — but it’s a fixture of MOBAs, making it easy to organize strategies on the fly. But it’s also part of the reason these games tend to have infamously toxic communities, so for some people the silence is a relief. I don’t really want to listen to someone yelling at me while I’m trying to learn a complex new game.

There are definitely features that hardcore MOBA fans will scoff at, but for everyone else — those who, like me, find the genre a bit too intimidating — Heroes is an amazing entry point. What Hearthstone is to Magic the Gathering, Heroes is to League of Legends and Dota 2. And while it’s different and streamlined, that doesn’t mean it’s lacking in depth. You still need to spend lots time trying different characters to master them, and figuring out the intricacies of each level requires a lot of practice. After playing for more than a week, I still can’t decide if I prefer to play as a support character or a long-range assassin, and it’s going to take a long while before I figure out which one better suits the way I play.

The difference is that, unlike other MOBAs, the learning process is a whole lot of fun.

Heroes of the Storm is available now on Windows and Mac.