Apple has just announced the next version of iOS, unsurprisingly called iOS 9. With the latest version of its mobile platform, Apple is focusing on making it smarter and more powerful, starting with a major upgrade to the Siri virtual assistant. Siri now has a feature called Proactive that can offer app suggestions and more based on context such as time of day or location. It's a lot like Google Now, Google's version of the virtual assistant, telling you how far away your next appointment is based on traffic or starting music when you plug headphones into your phone. Proactive lets Siri see what apps you have on your phone and suggest useful ones based on what you're trying to do. Apple says that Siri can also look into your inbox to ID incoming calls that aren't in your address book. All of this is wrapped into a new user interface for Spotlight that appears when you swipe down on a home screen in iOS.

iOS 9 also introduces deep linking within Spotlight searches, letting you access content within apps whenever you do a system-wide search, instead of just opening the app's main page. Spotlight also can do unit conversions without opening a web search, something that Siri has done for a while, but now queries can be typed in addition to spoken. Apple says that all of this new intelligent processing happens on the phone itself, meaning your data isn't being sent to a server in the cloud. It's a different stance than Google or Microsoft take, which leverage cloud processing to power their virtual assistants on Android and Windows Phone. 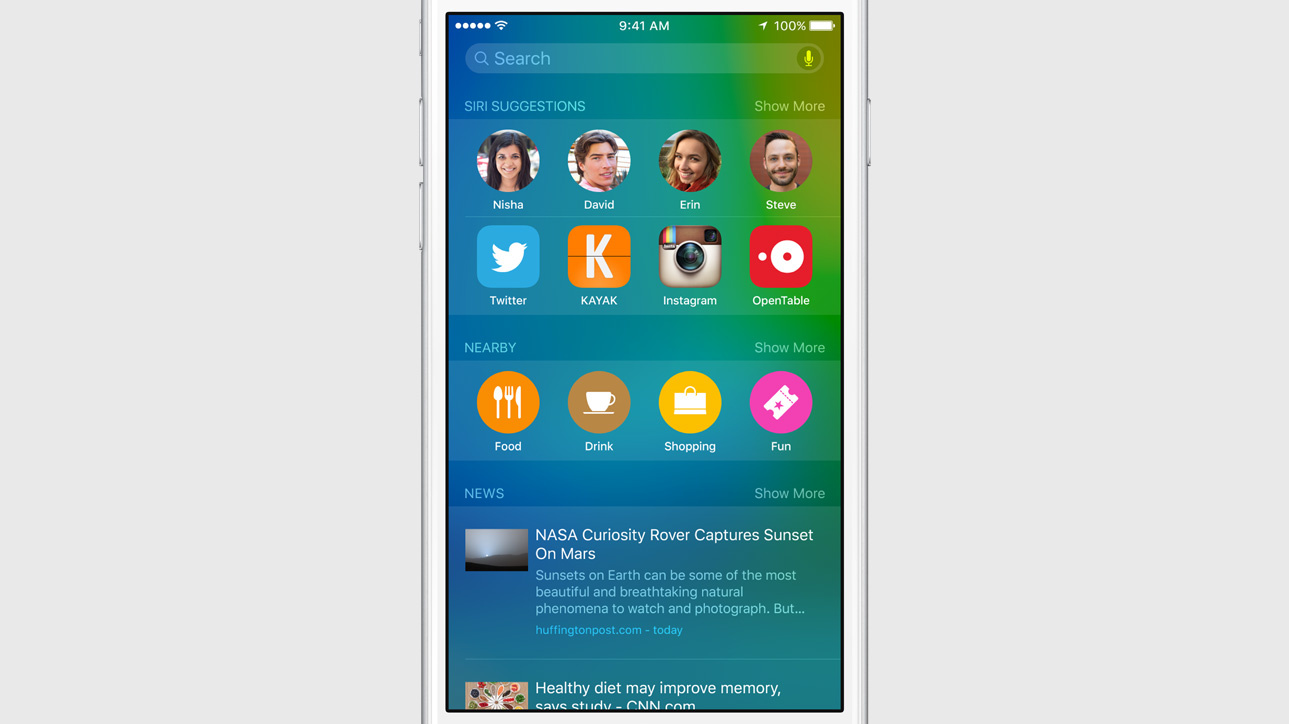 Apple's mobile payments service, Apple Pay, is also getting significant updates in iOS 9. First, it's launching in the UK, and will be compatible with more banks and credit card providers. It is also gaining support for store credit cards and loyalty cards. And finally, Apple is killing the Passbook name in favor of a new app called Wallet, which integrates credit cards, debit cards, store cards, and loyalty cards in one place.

The basic Notes app that's been included in iOS since the beginning is getting some new features, such as image insertion, checklists, and sketches. It's a lot closer to an Evernote competitor than ever before. 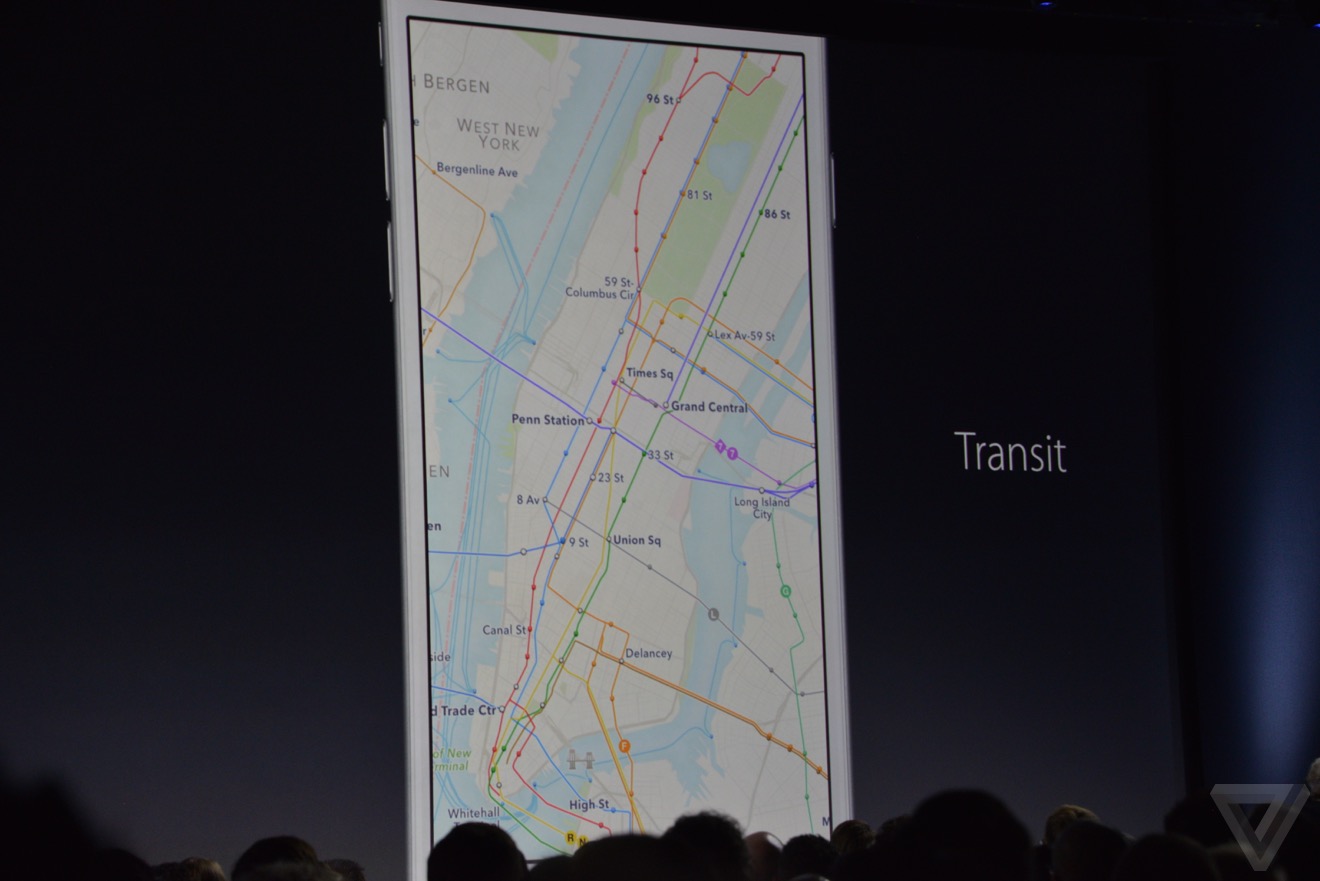 New for iOS 9 is an app called News, which, as you might expect from its name, is a place to get news content from a variety of sources. Articles are presented in a mobile-formatted layout that loads quickly and has informative animations and full-bleed images. Apple has partnered with a number of news organizations to provide content for the new app, such as CNN, Time, Wired, ESPN, Buzzfeed, and yes, The Verge. The app also can display articles from any web link, but Apple says the best experience is with those that have been specifically built for the app, much like Facebook's new Instant Articles. News is very similar to Flipboard and a number of other mobile reading apps that have been in the App Store for years. Apple claims the app will get smarter the more its used and will suggest content and articles based on what you prefer to read. News will be first available in the US, UK, and Australia. 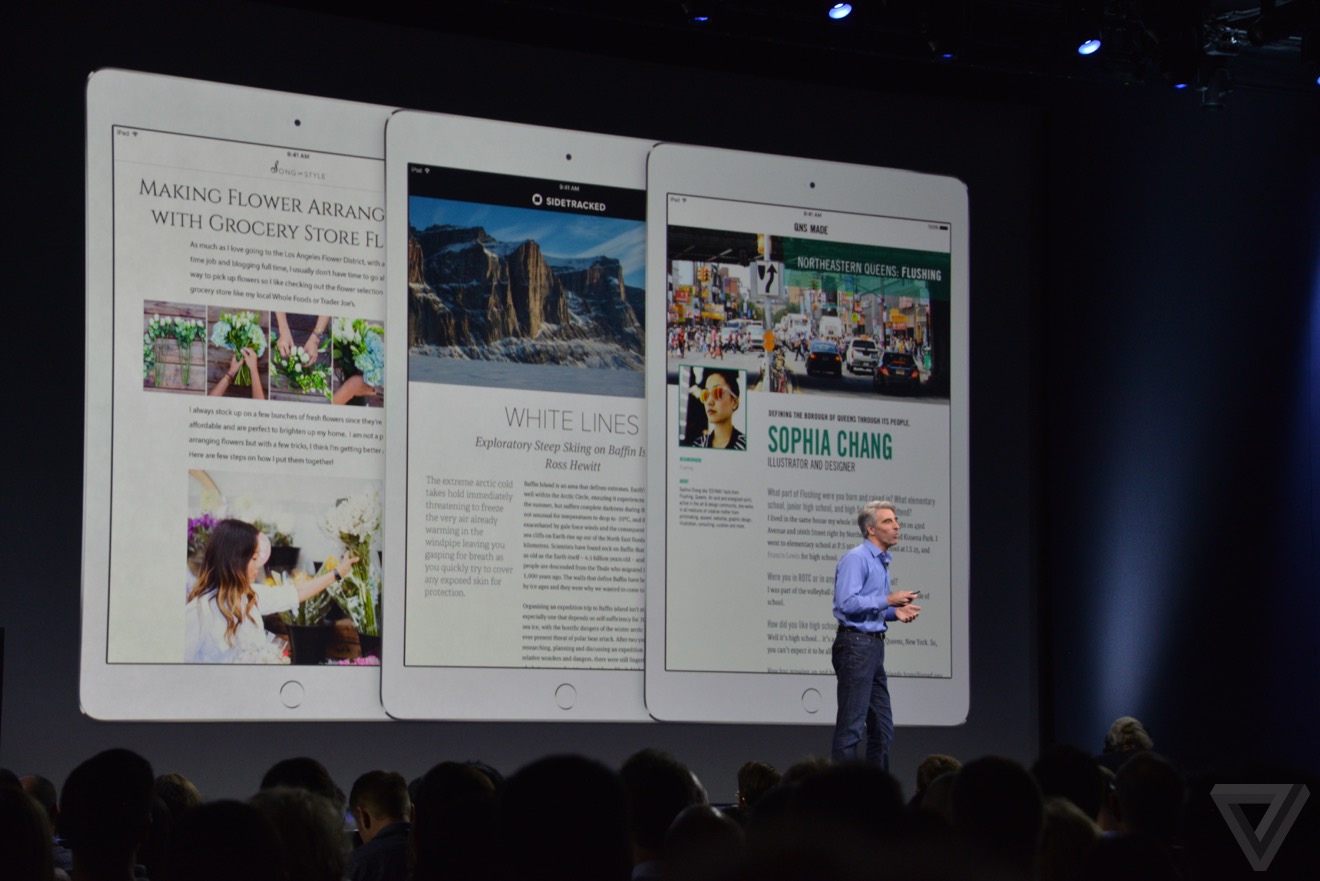 iOS 9 also introduces new power-user features designed specifically for the iPad. The on-screen keyboard includes shortcuts for cut, copy, paste, and more, as well as a new mode that turns the keyboard into a trackpad. Perhaps the biggest change to the way iOS works is in the new multitasking mode for the iPad. iOS 9 now lets you run two apps side-by-side at the same time, a feature that's been a hallmark in Microsoft's Surface tablets and Samsung's Galaxy tablets for a long time. A redesigned task switcher lets you swipe apps in to the same screen, much like Windows 8, and both apps remain fully active on the screen at the same time. Apps can be split 50-50 or 70-30 on the screen, and the iPad's existing multi-finger touch gestures work in either side. Videos can be watched in a picture-in-picture viewer that can be moved around the screen. Apple says that the split-screen mode will only be available on the iPad Air 2 (and presumably new iPads announced later this year), while picture in picture and the ability to swipe in apps from the side will come to older iPads. 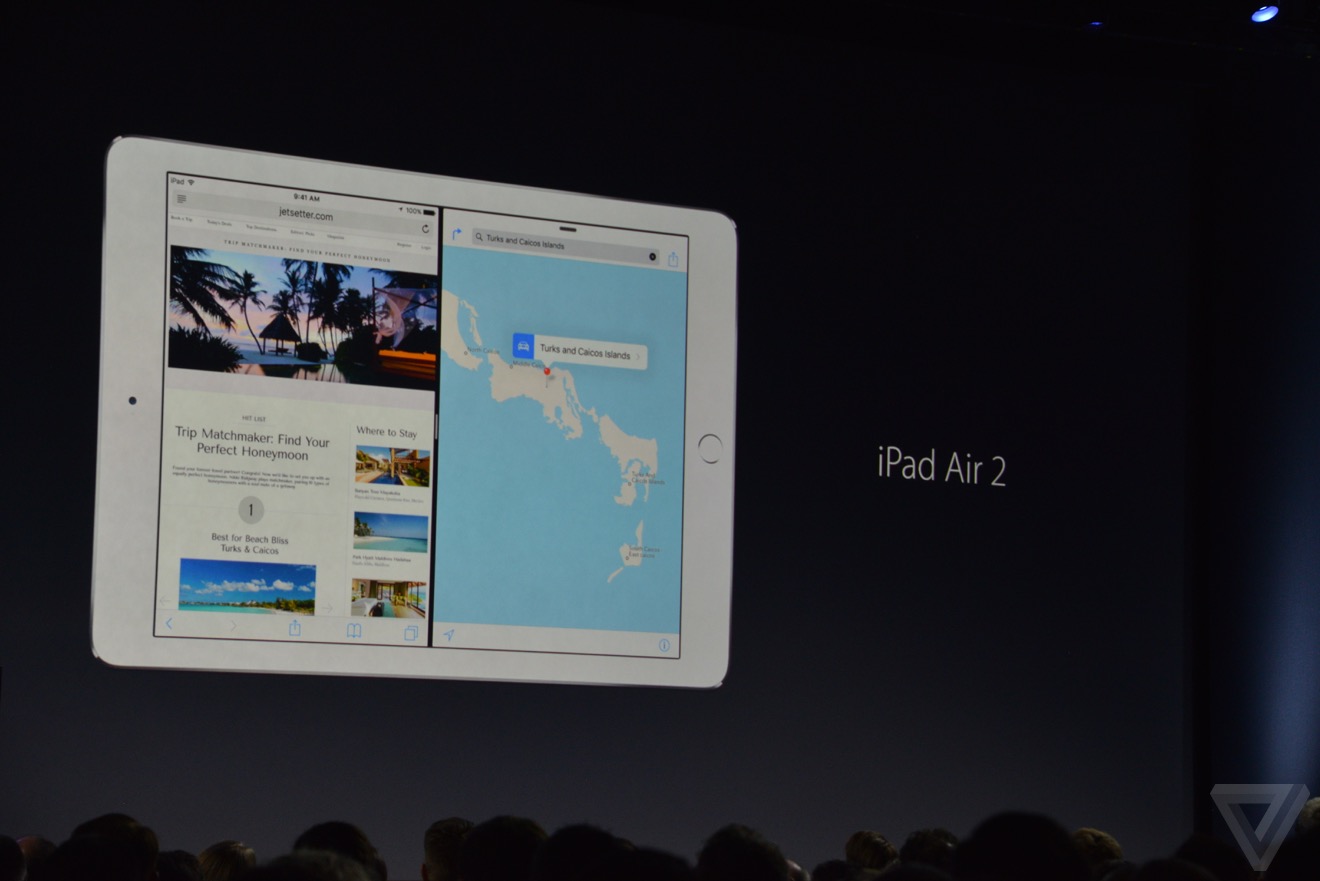 At a system level, Apple says iOS 9 is more efficient and smaller than ever. The new software only requires 1.8GB of free space to install, much less than the 4.6GB iOS 8 needed. Apple also says iOS 9 has a new "low power mode" that can squeeze another three hours of battery life out of a single charge. Details about how the new low power mode works are scant, but it's likely that Apple will limit background processes even further than it normally does when it's engaged. iOS 9 will also include a new system font, likely based off of the San Francisco font on the Apple Watch.

iOS 9 also brings upgrades to Apple's HomeKit and CarPlay services, with more devices and cars gaining support. CarPlay will support apps from automakers, ostensibly letting users control car-level things like climate control and seating positions, and it will also work wirelessly in future vehicles. Apple first introduced wireless CarPlay support with iOS 8.3, but there aren't any vehicles or head units that yet support it.

Apple will first release iOS 9 to registered developers today, followed by a public beta in July. It will be available as a final release this fall and is compatible with devices as old as the iPhone 4S and iPad 2 from 2011.