Racing drones through a forest is the sport of the future

The crowd at East Grinstead makes for an odd sight — most of them are wearing plastic goggles with long antennas sticking up, apparently ignoring their surroundings and staring out into empty space. Despite this, they react like a crowd at a football match, letting out oohs and aahs in unison, responding to some unseen action. Suddenly, a small drone skitters out of the trees on their right, crashing through the brushes before landing in a spray of dirt and leaves. There’s a cheer from the begoggled watchers and a small round of applause.

This is the world of first-person drone racing, an activity that currently occupies the ill-defined ground between dedicated pastime and fledgling sport. As drones become an increasingly mainstream phenomenon, racing leagues have popped up around the world. Anyone who takes it seriously — pilot or spectator — doesn't watch their craft from a distance, but instead uses mounted cameras and special video goggles to see the world from their drone’s perspective, also known as first-person racing or FPV.

As far as drone racetracks go, the 100-meter-long course at East Grinstead is decidedly rural. Instead of a warehouse or a parking lot, the FPV League — one of the UK’s fledgling drone racing organizations — has decided to plot a circuit through a strip of woodland pitched on a steep hillside. The course is too narrow for the drones to race abreast, so instead, they're competing individually in time trials. Each pilot pays a £10 ($15) buy-in and gets four goes 'round the track, with the winner taking home the pot. Just a few hundred meters away there are fields and open skies, but here the course is almost lost among the trees, with sharp turns, steep inclines, and even a miniature ravine all designed to test a pilot’s fine rotor skills.
"There’s no point in thinking, ‘Yeah, I can get through that’ and forgetting about the propellers."

"We’ve had a quarter of the people complete the course so far," says Thomas Greer, a 25-year-old network engineer from Glasgow who runs the FPV League. "Which is more than I expected." He says that although a few of the participants in the race — the first to be thrown by the newly formed FPV League — are professional pilots who do commercial filming work by drone, they still struggle with this sort of precision racing. "You need to be good with spatial awareness and know exactly how wide your quad is. There’s no point in thinking, ‘Yeah, I can get through that gap’ and forgetting about the propellers."

The racers are all men of mixed ages, wearing mostly jeans, T-shirts, and cargo shorts. More than a few work in the computer industry in one capacity or another, and all are racing small, custom-built drones constructed around 25-centimeter-long X-shaped carbon fiber frames, with four propellers —or props — on each corner. Although the video goggles let them fly from anywhere nearby, today's race has a special cordoned-off area in the middle of the track for pilots, where they take a seat in picnic chairs, leaning into the corners as they race as if playing an intense session of Mario Kart.

Crashing is both a constant threat and a shared joy at FPV races. Some drones are clothes-lined by tree branches, others get snarled in bushes, some bounce off the rocks, and more than a few fail before they’ve even crossed the starting line, thrashing about on the floor in a cloud of leaves and dirt like a toddler throwing a tantrum. The best crash, however, goes to a pilot who manages to get his drone wedged between a pair of trees (just as Greer predicted). When his heat is over and the marshals have given the all clear, he and a few other pilots race down to where the drone is stuck, taking pictures in front of the craft and declaring it the "crash of the day" like hunters posing with a kill. 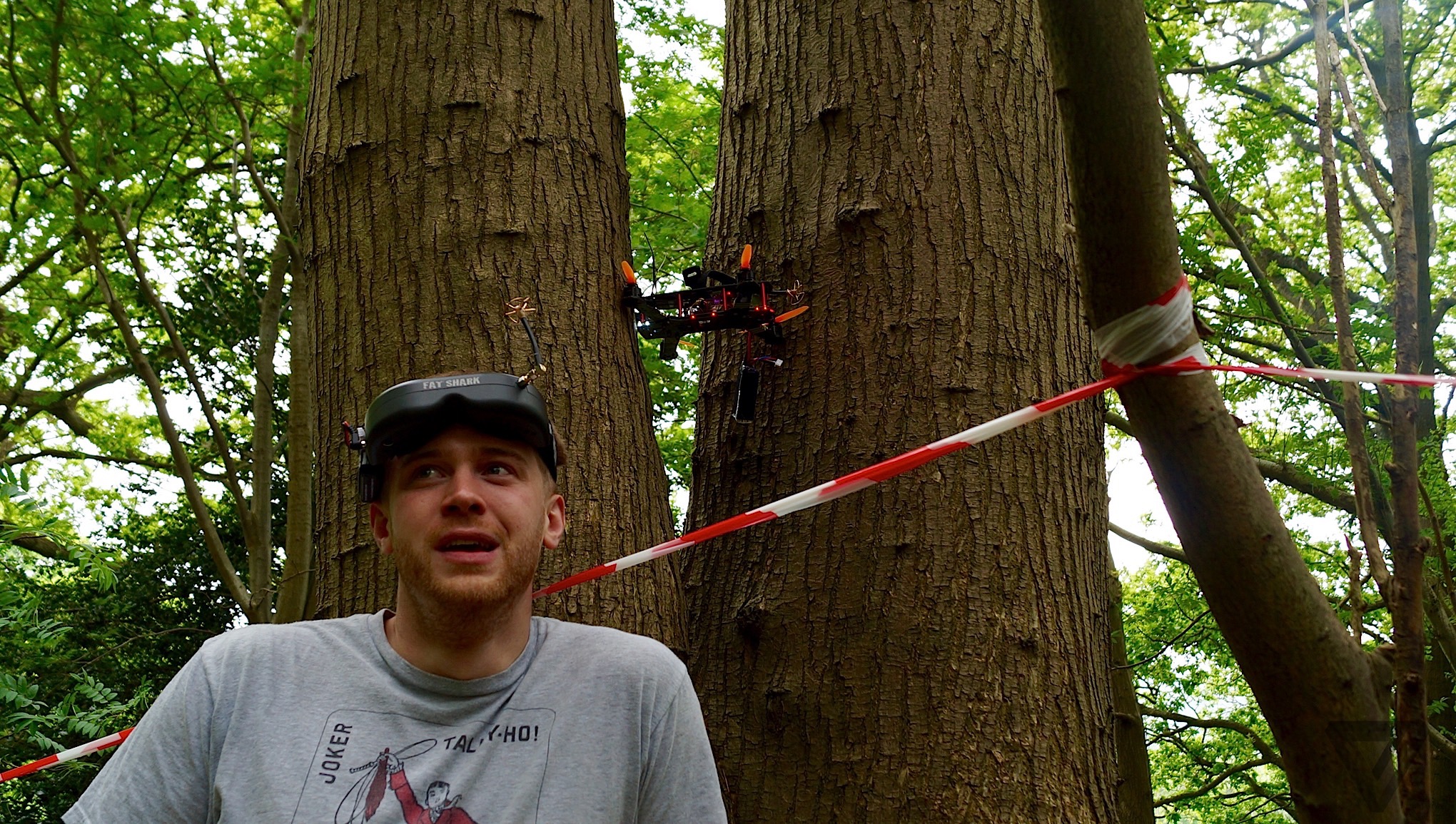 Although in this particular crash the drone comes away unscathed — the pilot puts it down to a brand of "indestructible props" he’s been buying from China — more often than not there’s repair work to be done between races. Up the hill from the course in the grass garden of what was once a stately house (and that’s now home to a scientology center), there’s a gazebo full of chargers and spare parts, and a taped-off area for pilots to test out their on-the-fly adjustments. More time is spent tinkering than racing, but quadcopter racing comes with a deep well of arcane detail for pilots to engross themselves in — everything from battery discharge rates to the proper way to balance propellers can be debated and fiddled with.

Joking about the possibility of a "drone olympics"

Like a lot of enthusiasts who find their field of interest embraced suddenly by the wider world, the quadcopter pilots display a particular mixture of derision and pride when chatting about the popular acceptance of the craft. They’re irritated by the idea of kids buying camera-equipped DJI Phantoms to "take a peek next door," but joke easily about the possibility of a "drone Olympics," with just the slightest hint of seriousness. They also, for the record, don’t like to call them drones and prefer the term quadcopter — but popular usage is a hard rap to beat.

When asked how much it costs to get into the sport, one pilot laughs and responds: "Do you want the official cost, or the wife-cost?" (The atmosphere around the charging tent is friendly and open, but extremely male — I only spot one female spectator and no female pilots.) He says that although you can get started in the sport with a £150 mini quad, once you’ve bought the video goggles, a transmitter, charger, spare batteries, and other assorted bits of kit, total expenditure usually hits around £600 or $920. Of course, says another pilot, that’s just for a single drone, and enthusiasts own more than one, with different frame sizes and rotor setups. "You need to look at the rules," he says. "The correct number of drones to own is n+1 … They multiply, they self-multiply."

The winning craft in the day’s racing looks particularly chic, with neat wiring, green, bug-like antenna, and a central camera that makes it look like a cute Cyclops. It belongs to Dominic Clifton, a software engineer who also designs an open-source flight controller for drones used by many of the pilots in attendance. As he accepts the prize money for his winning flight time (you can watch the footage from his drone above), the day’s racing suddenly begins to feel somewhat official. There are outbreaks of applause and photographs, and Greer gives a short speech thanking both the participants and the day’s sponsors — a UK-based supplier of drone parts named RadioC.

Whether FPV drone racing is headed for the big time or not is a popular topic of conversation. More than a few organizations have already taken the initiative and declared themselves the official so-and-so league for their own country or region, but as sports go, FPV drone racing still feels refreshingly free-wheeling. Some people might dismiss this as amateurism, but in East Grinstead's scrubby woodland, it feels accessible and welcoming. Greer tells me that at the moment he’s more interested in changing perceptions about the aircraft than becoming the Sepp Blatter of the drone world.

"Where it goes in the future, I don’t know is the honest answer."

"Where it goes in the future, I don’t know is the honest answer," says Greer. "This is just a hobby for me but I seem to be good at organizing things." He adds that at the end of June he’ll be taking some of the League’s drones and goggles to a nearby model show to let the public get a proper hands-on. "We’re going to give people a chance to try and see it for themselves, so they can experience flying from the quadcopter perspective," he says. "By giving people the opportunity to see how much fun it is and how easy it is…" He trails off. For those who already involved, the attraction of owning and flying a drone speaks for itself.