Star Wars created the most magical event of Comic-Con

We loved it. Is that okay?

By Bryan Bishop and Kwame Opam

On Friday night, Lucasfilm held its Comic-Con panel for Star Wars: The Force Awakens, and it unquestionably stole the convention. Adam Driver and Gwendoline Christie talked about working on the movie for the first time, J.J. Abrams played a behind-the-scenes featurette, and Harrison Ford came out to riff and reminisce with Mark Hamill and Carrie Fisher. It was basically the ultimate Star Wars event — and that was before Abrams announced that all 6,500 people in Hall H were then going to be attending a secret Star Wars concert with the San Diego Symphony orchestra. (Lightsabers were included.)

We were there for both events, and while it’s all good times for the faithful, it’s a slightly different proposition for people like us that are covering these things. We’re supposed to remain impartial — not only from promotional voodoo, but from the reality distortion field that comes with putting that many people that love one thing all in one place. But by the time fireworks began lighting up the sky, we couldn’t help it: we were swept up in the moment like everyone else.

We immediately began talking: how did this end up being good? Was there something legitimate about the experience, despite it being a massive promotional event designed to hype a movie that’s still five months away? And if that was true for the concert, what did it say about the “immersive experiences” and installations that make up the rest of Comic-Con’s promotional wonderland? 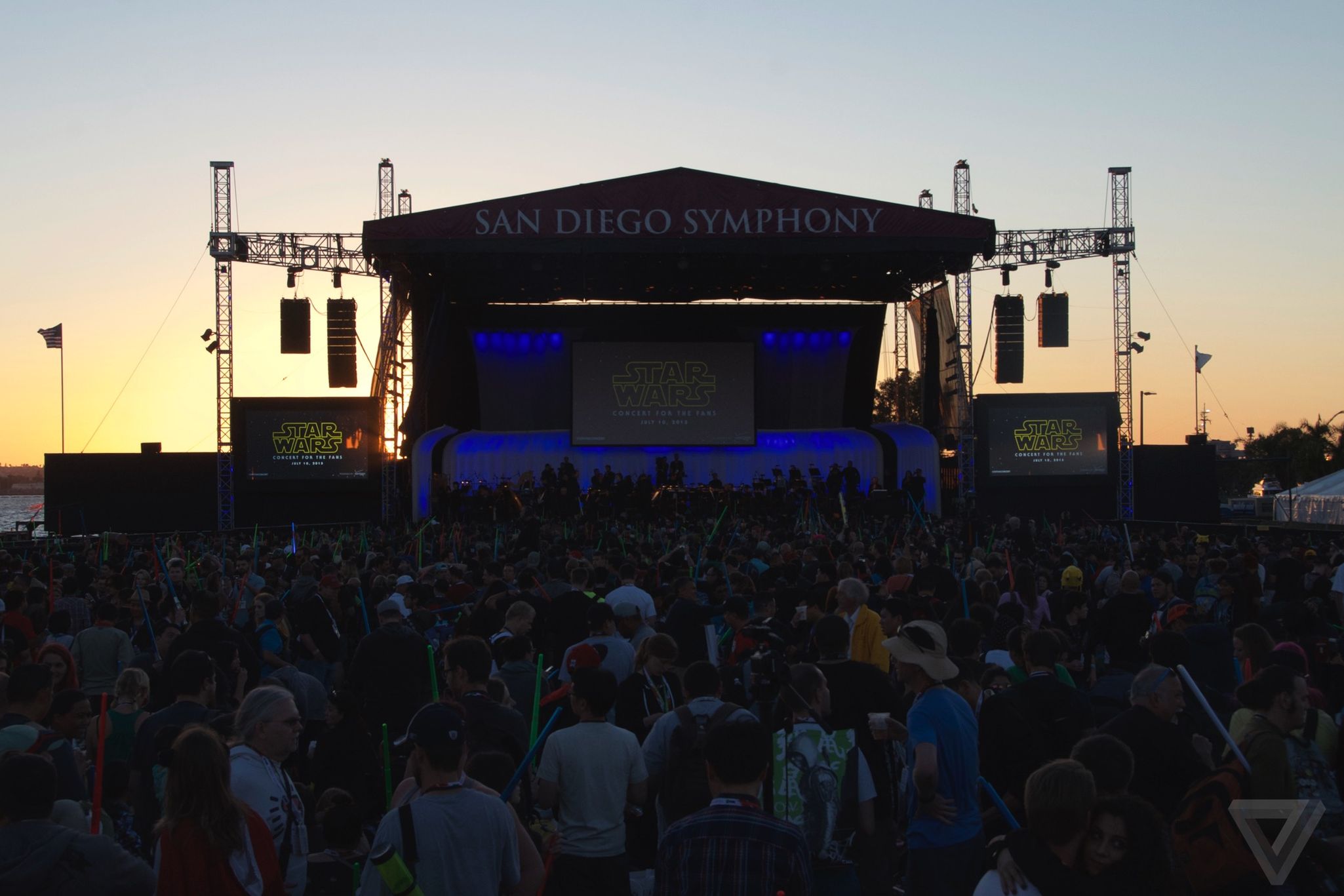 Bryan Bishop: The night was a surreal experience. Being in Hall H is always a rush-of-the-moment kind of situation — if you’re in that room, you ride the wave of energy no matter what — and between the behind-the-scenes video and Harrison Ford showing up, people were ecstatic. But when Abrams announced the free concert, it went up another level entirely.

Kwame Opam: I agree completely. Chris Hardwick announced that we were actually leaving Hall H for a concert together, and I immediately thought, "This is insane. Can they do this? This is absolutely insane." It’s days later now, and I’m still stunned they pulled it off. Other panels couldn’t hope to command that kind of love and excitement from the crowd. Not even Warner Bros. for Batman v. Superman.

"I immediately thought, 'This is insane. Can they do this?'"

By the time we got outside and to the venue, we were being handed lightsabers. At that point, it was beyond clear we were being swallowed up by the Star Wars brand. And I was fine with it.

BB: There was a moment before the concert started, while they were playing all the pre-show music (which, for some reason, included a dance remix of "Don’t Stop Believing"), when "Sweet Child O’ Mine" came on. I grew up in the ‘80s, so of course I loved it, and there I was: lightsaber in hand, with Guns N’ Roses playing at some bizarro Star Wars concert at Comic-Con. I put both hands in the air and said, "This is the perfect event!" If you’re Lucasfilm, that’s the exact reaction you want people to have — and that was before Abrams and the cast came out on stage, lightsabers in hand.

Gwendoline Christie led 6,000-plus people in a lightsaber salute. There were fireworks. And while one easy take is that everybody was being manipulated in the name of commerce, I actually think that’s too binary. This may sound nuts, but I think Abrams actually dug the fact that they could do something like this.

KO: Definitely. Abrams is as much a fan as anyone in the crowd. There was a moment during the panel where he talked about how the fact that he was chosen to direct the new Star Wars makes no sense. He’s, of course, the steward and one of the faces of a massive international brand that makes tons of money, but he’s also a guy who loves the franchise. And that shone through.

"How could you not feel something when Harrison Ford hugged it out with Mark Hamill?"

You can always be cynical (or at least on-guard for Brand Infiltration). The lightsabers had Duracell branding. The show itself was sponsored by Verizon. Fans are being pulled body and soul into years and years of Star Wars movies, comics, games, and cartoons, and it’ll all make Disney a lot of money. But Friday was an acknowledgment that fans love this stuff and have loved it for years. Extraordinary care was made to make the concert an event worth being at, and deference was paid to what makes the series great. How could you not feel something when Harrison Ford hugged it out with Mark Hamill? It really makes you want to believe that love conquered commerce.

BB: The sight of them hugging like old buddies thawed the heart of a generation (though I still think Hamill had been drinking). So let’s just say the thing that you don’t say when you’re on guard against Brands: there is a difference between the experience that’s being provided and the commercial or brand motivations behind said experience.

Ultimately, all mainstream entertainment is a commercial endeavor, but we (mostly) don’t begrudge movies, TV, and music for that. Shouldn’t the same be true for "experiences," however that’s defined? Like SXSW and other shows, Comic-Con is filled with branded installations and tie-ins that offer all kinds of real-world interactions — all to promote some show, product, or property. Sometimes it’s a haunted house with VR; other times it’s an escape room. They’re easy to mock, but these are unique experiences that bridge the gap between the real world and traditional entertainment — and just because it’s marketing that’s making it happen, that doesn’t mean that there’s not a genuine thing buried in there, somewhere.

I get frustrated by the amount of bad, tie-in virtual reality experiences that are out there, for example. But that’s still a lot of companies investing in virtual reality content. Not to mention the exposure it brings to the medium. It’s hard to say that’s a bad thing. 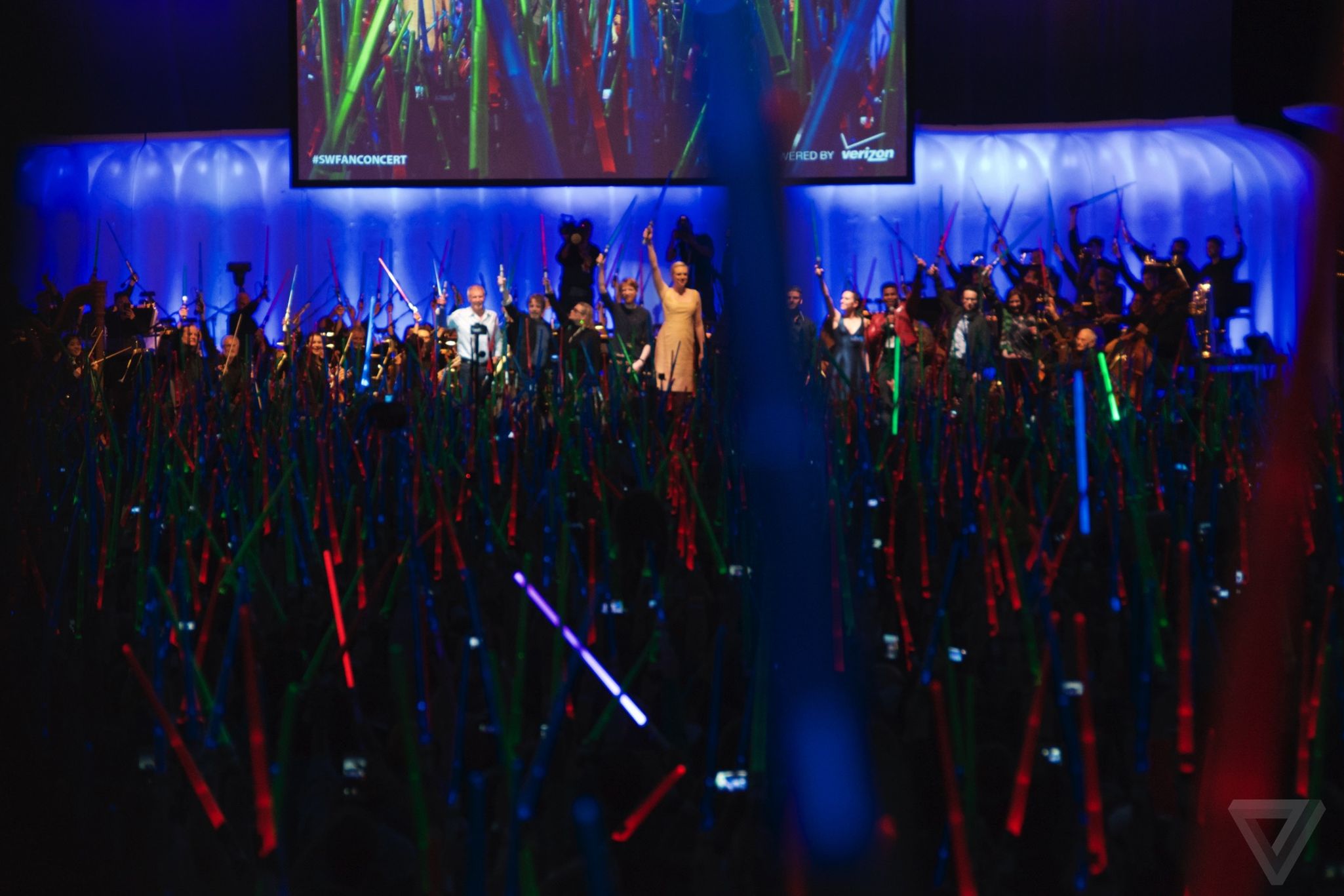 KO: I don’t know that we should let go of our suspicion of Brands on an overarching media level, but Brands are a constant. Marketing is constant. That doesn’t mean the experiences they offer us as consumers are inherently evil. We weren’t somehow hypnotized into thinking that Star Wars is worth caring about. The people in the crowd came from all over, had different connections to the property, and got to share in something that felt good and, most importantly, felt sincere. They were brand activated, yes, but the experience was valid.

"Disney created a venue for everyone to let their love for 'Star Wars' sing out."

And here’s the real point: fans already do that themselves! Any cosplayer wants to feel like the brand they love is out in the real world with them. They dress up in outrageous costumes for days because they’re buying into what they care deeply about. They are conspicuous consumers, and they want these experiences. As impressive (and surely expensive) as the concert was, all Disney created was a venue for everyone to let their love for Star Wars sing out. And it felt like it came from the right place.

Lightsabers were handed out on admission.

See all of the San Diego Comic-Con news right here!