Spending between $200 and $300 on a Chromebook usually gets you a hunk of plastic that’s decent enough at running a web browser, editing Google Docs, watching Netflix, and playing Spotify. Asus is looking to upend expectations with its new Chromebook Flip, a device that feels more premium than its price lets on — it’s metal — and one that lets you flip its screen around into various modes that make the whole experience feel more unique than your everyday clamshell laptop. The above-average build quality and other pluses don’t mean the Chromebook Flip is the best Chromebook you can buy; it’s not. But that doesn’t make it a bad choice.

At $279 (you should avoid the cheaper model with less memory), it’s very affordable — but then most Chromebooks are. And so far, Asus hasn’t struck the balance between price and quality in the same way that Acer and Toshiba have. But the Chromebook Flip shows that the company is getting there. 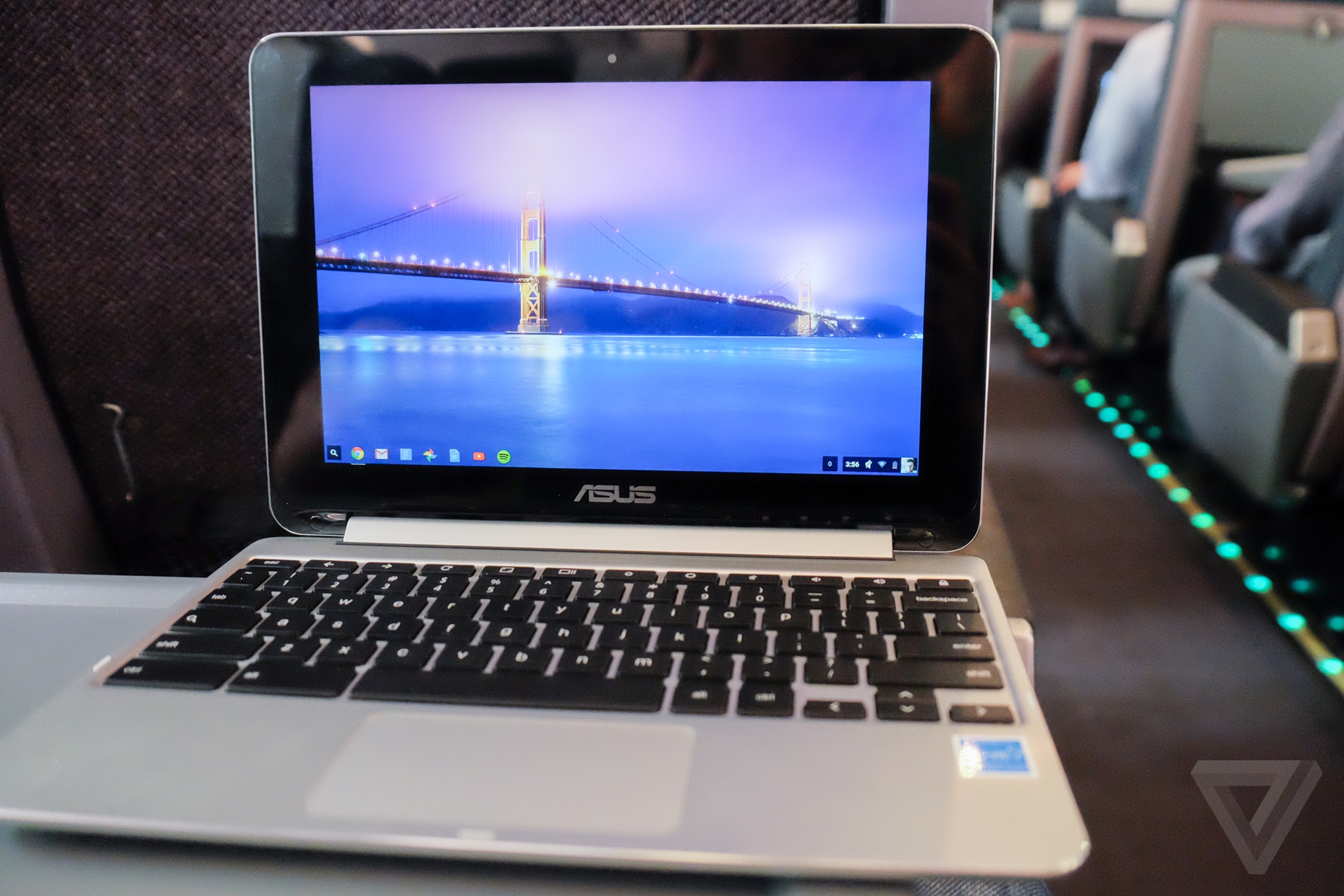 Out of the box, the Flip makes a strong first impression. A brushed aluminum chassis is the foundation of the machine’s impressive-for-the-price construction. That doesn’t come at the cost of heft; the Flip weighs in at 1.96 pounds and is easy to carry anywhere or toss into a bag. Everything on the outside is tastefully designed, with two speakers placed at the bottom front, your usual lineup of ports (2 USB, microSD, micro-HDMI, headphone jack), and even physical volume controls on the right side. Those come in handy when you’re using the Flip like a tablet. But Asus loses some points for the proprietary charger, and if you’re the clumsy type, plastic Chromebooks may still be a wiser option. The Flip took a single, two-foot spill during my time with it that was enough to permanently deform one of its metal corners. (It still worked fine afterwards.) 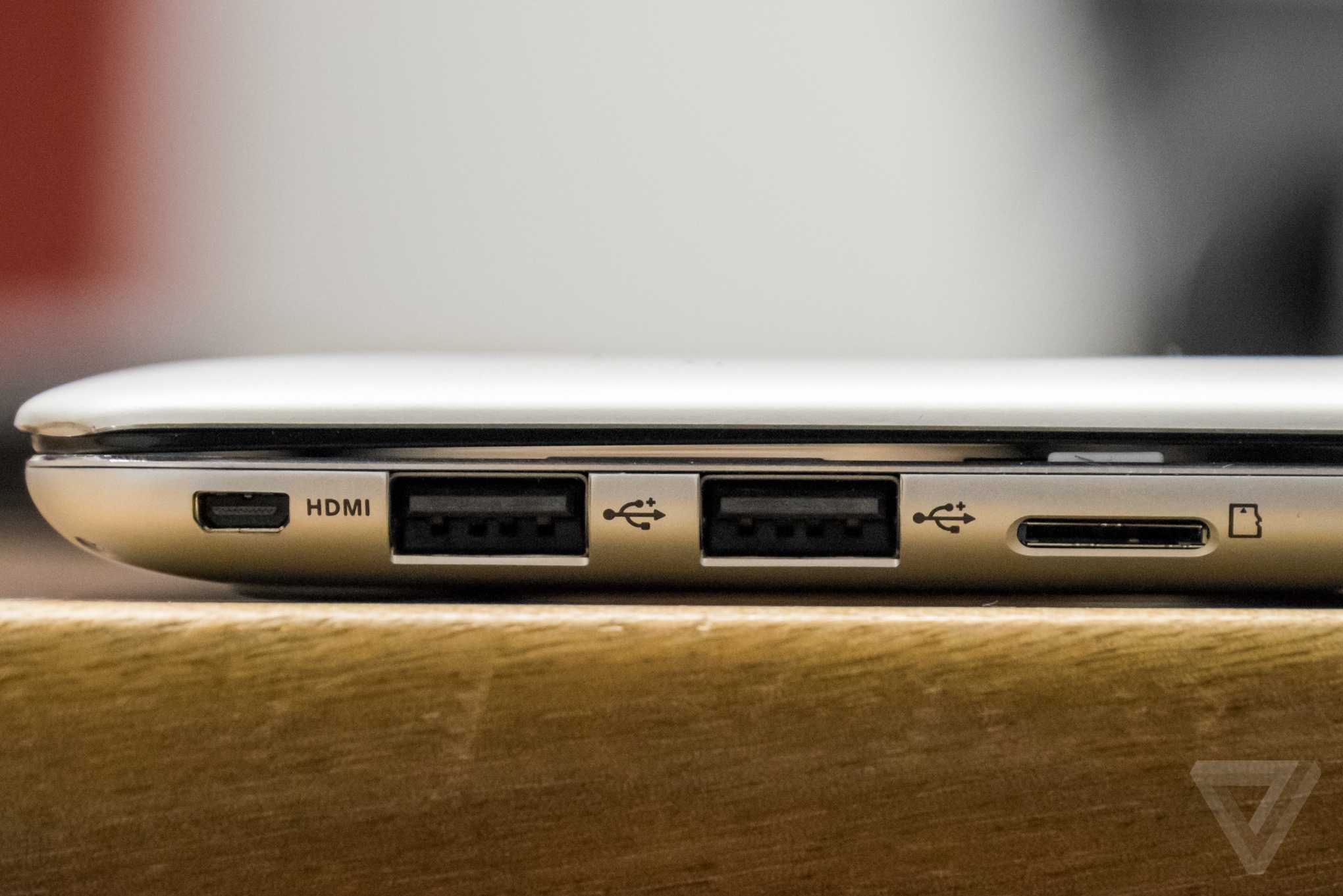 Flip it, or just use it like a laptop

The Flip’s hinge is very sturdy and stayed that way throughout my testing. That’s reassuring considering how often you may be switching it between traditional laptop, tablet, stand, and a "tent" mode that I could never really find any good use for. But the other configurations definitely prove convenient depending on where you’re using the Flip. It’s small enough to allow the keyboard out in almost every situation, but the stand mode, which props the display up with the keys facing down, makes for a great way to watch Netflix or YouTube in bed.

But then you get to the screen, and it’s here where Asus stumbles. The display already feels small at 10.1 inches, but that limited real estate is made all the more obvious by a big black bezel surrounding it on all sides. This makes some sense considering you’ll sometimes be holding the Flip with both hands on the screen, but it’s still a strike against the Chromebook aesthetically.

Rating the display’s quality, I’d call it so-so. Other than a noticeably warm white balance, colors are accurate, vibrant, and pleasant overall thanks to the IPS panel. But even in a form factor this small, my eyes struggled with tolerating the Chromebook Flip’s 1280 x 800 resolution. When you’ve got it on a desk and use it like any other Chromebook, it’s totally passable. But it’ll be closer to your face in tablet mode, and that’s where things get pixely. In a world of Retina and quad-HD displays, it’s impossible to ignore.

But it’s also worth remembering this thing’s price: there aren’t many $300 products with gorgeous, super sharp screens out there. Considering where the Chromebook Flip sits in the market, what you get here shouldn’t be any surprise. And for plenty of people, it’ll work just fine — especially if you’ve not yet been spoiled by higher resolutions. In terms of touchscreen response, the Chromebook Flip was satisfactory and I rarely noticed missed taps or other hitches. 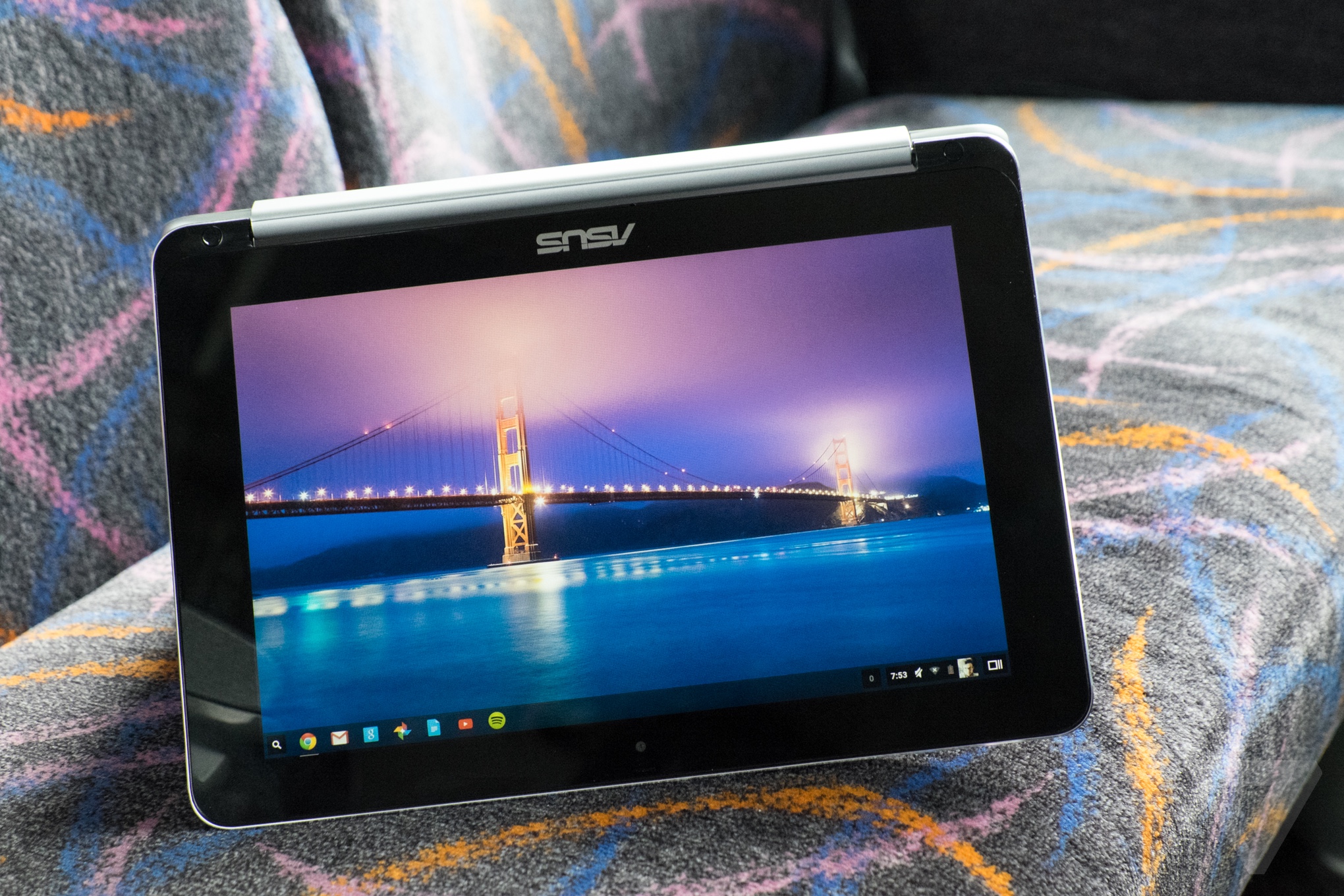 The Flip’s keyboard is a mixed bag. It’s quiet and offers decent enough travel to where my hands never felt strained. But it’s pretty crammed, and coming to this from my regular 15-inch laptop was a recipe for typos. Eventually I adjusted somewhat, but I never felt totally confident that I’d be able to type without errors. But the touchpad is great! And that was a nice surprise for a Chromebook at this price. It’s just the right size considering the Flip’s overall footprint; it’s smooth, makes a satisfactory click when you press it, and was always very responsive during my time using it. Somehow these cheap Chromebooks keep lapping more expensive Windows laptops when it comes to touchpads.

an average screen and average processor work against the flip

As for performance, the Chromebook Flip’s Rockchip processor can handle common tasks without any major issues or drastic slowdowns. Does it stand up to Google’s supercharged (and priced accordingly) Pixel? Well no, of course not. The sweet spot for tabs in Chrome seemed to be around 10 in my testing, though you’ll definitely notice some stuttering when scrolling down pages before they’ve fully loaded. Some, like the New York Times homepage, always proved jittery no matter what.

Once you get up near 20, the Flip really starts to wrestle with keeping it all going. Here again I’ll remind you to stay away from the 2GB version Asus is selling for $249. You’ll save money, but the drop in usability will destroy any allure this Chromebook has going for it. Memory makes a huge difference when you’re multitasking between Spotify, Google Docs, Gmail, Twitter, Facebook, and on and on and on. To its credit, the Chromebook Flip shows strong longevity, generally meeting the 9-hour battery life that Asus promises. 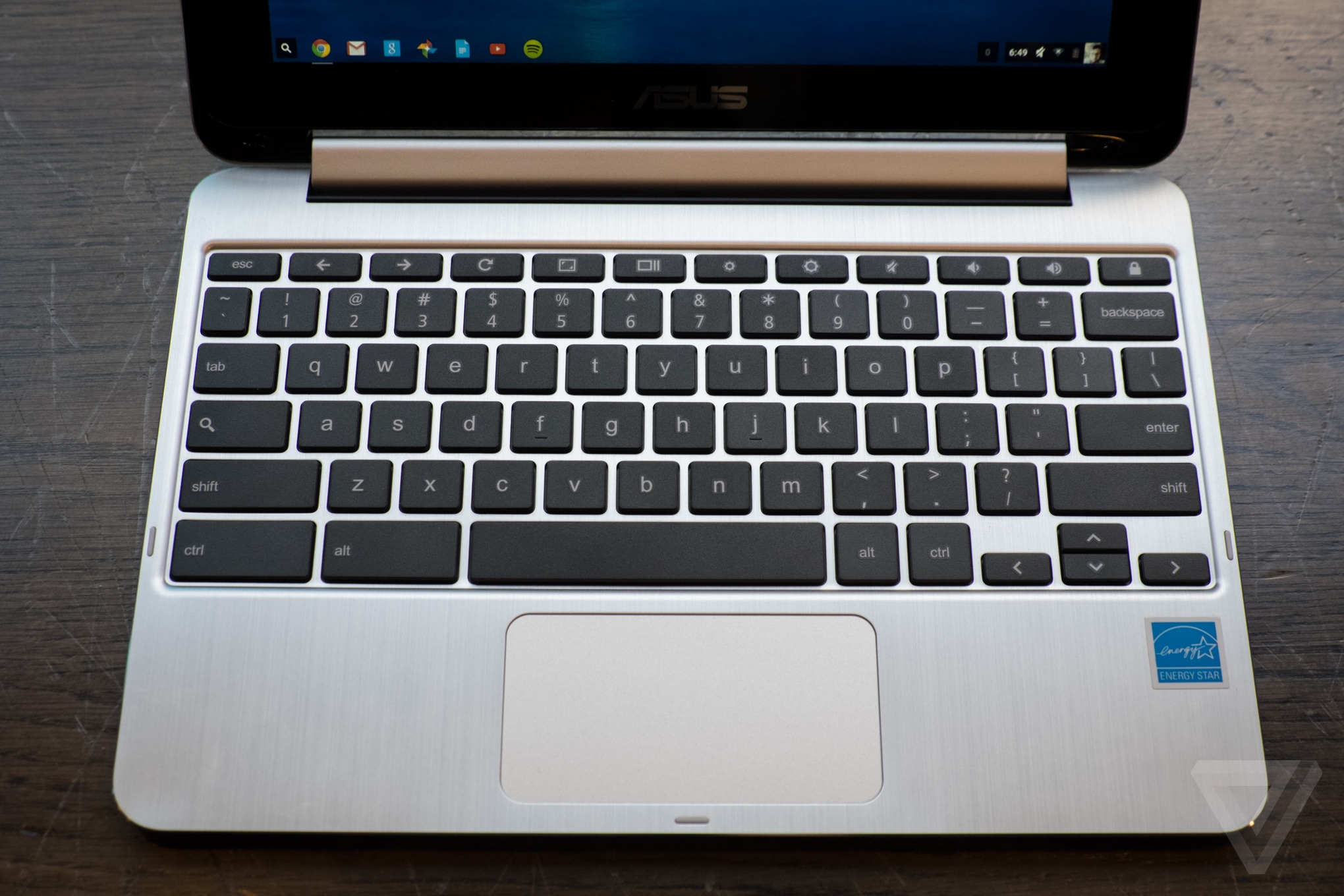 Chrome OS itself remains largely unchanged since our last few reviews. By now, you’ve probably got some idea of whether Google’s all-things-in-the-cloud software is right for you. (With the Chromebook Flip, you’ll get 100GB of cloud storage for two years.) Chromebooks are for web browsing; they’re for document editing; they’re for messaging; they’re for emailing. Despite the improvements Google has made, Chromebooks still aren’t right for photographers and other professionals who rely on intensive editing tools. But aside from the ludicrous Pixel, you should already know that, based on how cheap most of them are.

Google is working to make it easier for Chromebooks to double as tablets, too. The Material Design-style virtual keyboard is pleasant to use (with full emoji and handwriting support), and you can run a tiny list of Android apps like Evernote and Vine alongside your Chrome web apps, which helps some. But if a true tablet experience is what you want, this Chrome OS convertible just isn’t as compelling as an iPad or Nexus 9. Holding onto the keys on the back never stops feeling awkward, for one, and the software just isn’t there yet. I’d stick to using the Chromebook Flip in its regular clamshell (for work) and stand (for entertainment) modes. 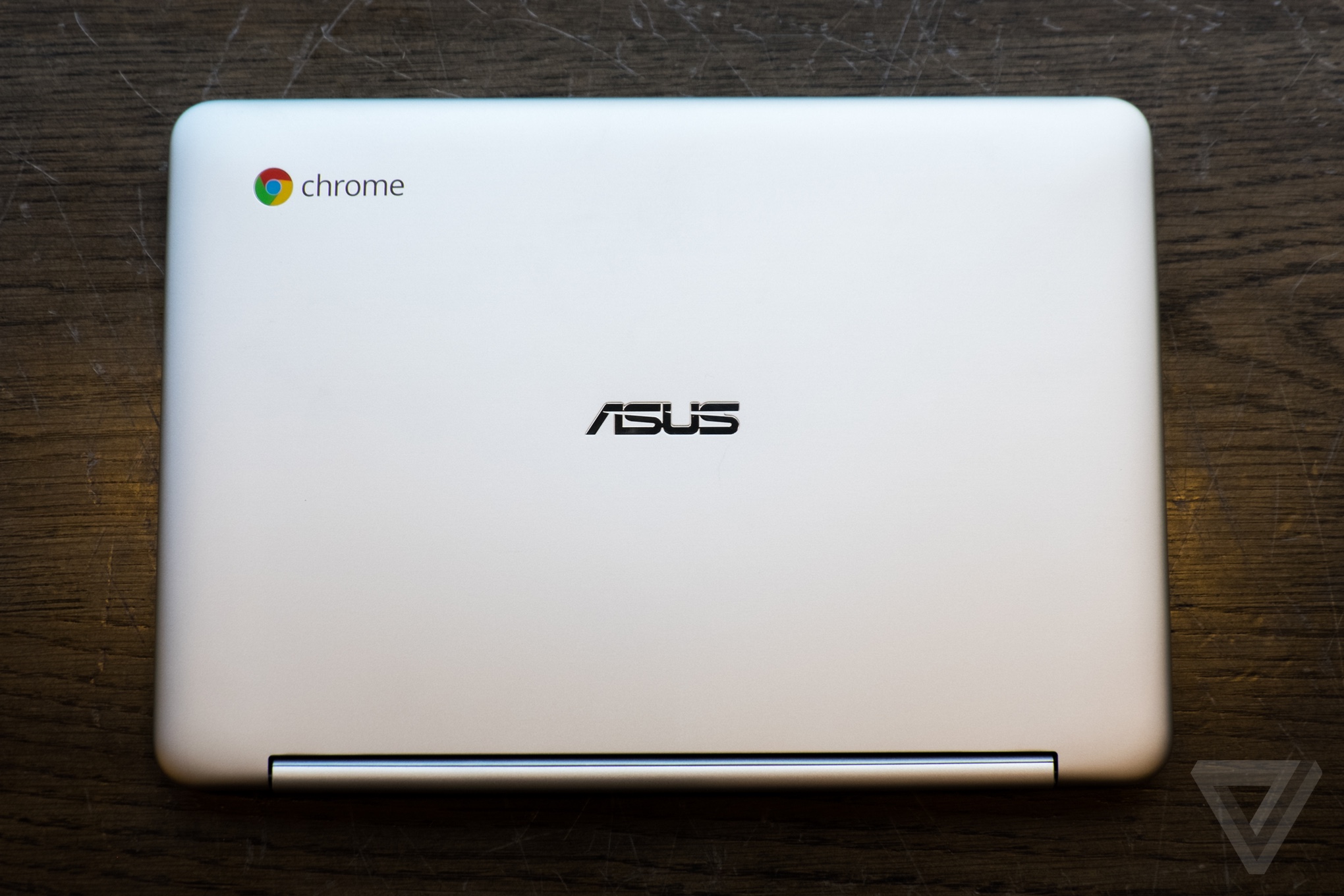 If you want the best Chromebooks available today, those remain the Toshiba Chromebook 2 or the Acer Chromebook 15. But the Chromebook Flip makes a strong argument for "good enough" despite minuses like a just-okay screen and average performance. The impressive build quality, great trackpad, and portability of this 10-inch convertible could (and probably should) push it above the sea of Chromebooks at the default price point between $200 and $300.