The Verge Review of Animals: the all-female whiptail lizard

The Verge Review of Animals: the all-female whiptail lizard

Whiptail lizards are basically the Amazon warriors of the animal kingdom.

All female, no filler

Many species of whiptail lizards are all female. That's right: these badass ladies figured out how clone themselves, so they wouldn't have to bother having sex with males to maintain their species. This natural form of cloning is called "parthenogenesis" — and it isn't as complicated as it sounds.

First, let's talk about sex. During sexual reproduction, a sperm and an egg combine to form a fetus. For that to work, each parent supplies half the genetic material. So in female lizards that reproduce sexually, chromosomes — the packages that contain DNA — are duplicated inside cells, and then undergo two rounds of cell division. Each egg winds up with 23 chromosomes each, half the number that appear in normal cells. That way, when an egg and sperm cell merge, the right number of chromosomes combine to make healthy offspring.

But here's the kicker: even though these species don't need to have sex to survive, female whiptail lizards still display mating behaviors, meaning that females sometimes mount other females. Scientists think this behavior is hormonally driven; high progesterone levels may cause females to mount others. But they probably don't just bump cloacal regions for funzies. Studies have shown that females who are mounted by another female are more fertile than those who go it alone, likely because the mounting behavior promotes ovulation. Did I mention that whiptail lizards are fabulous?

Anyway, these lizards weren't always members of the "no-boys-allowed" club. Scientists think that they developed this mode of reproduction after a male member of one species mated with the female member of another species. The New Mexico whiptail, for example, is a hybrid that popped up after a Western whiptail mated with a little striped whiptail. Typically, hybrids are dead ends; they can't reproduce. But whiptail lizards couldn't care less about those silly biological rules. The females just started cloning themselves instead. (If males were generated from this union, they likely died off. Sorry, guys.) 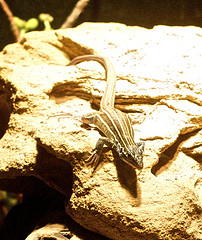 And we have a lot of evidence for this idea because researchers were actually able to recreate this process in the lab by mating two different species of whiptail lizards in 2008. The resulting "species" — there's some debate over the use of this term — was called Aspidoscelis neavesi, after William Neaves, the scientist who first discovered whiptail lizards with four sets of chromosomes in 1967. By 2014, the scientists had amassed a colony of 200 lizards.

Now, whiptail lizards aren't the only animals who can clone themselves. Unisexuality has been identified in more than 80 groups of amphibians, reptiles, and even fish. But many of those species do it under specific circumstances, like when males aren't available. Female Komodo dragons, for instance, sometimes engage in parthenogenesis. Whiptail lizards, on the other hand, clone themselves all the time. As a result, they're among the most studied parthenogenetic species; their evolutionary success has essentially turned them into the poster child for unisexuality. Unfortunately, the reason that they're so iconic might also end up causing their downfall. After all, sex has a ton of benefits!

Sure, sex is incredibly inefficient if you're looking to grow a species quickly; the fact that each individual needs to spend energy finding a mate and then convincing them to get it on is costly and extremely tedious. But mixing your DNA with another member of your species is a great way to build a diverse and resilient population. Whiptail lizards don't get to do that, and that's really risky. They end up having the same weaknesses — weaknesses that new parasites, diseases and predators are just begging to exploit. In addition, if something in their environment were to change drastically, they might not be able to adapt to survive the change. And in the long run, whiptail lizards won't get a chance to evolve into a stronger species. Unless something biologically crazy happens, this is it for them.

But let's be honest, if all your species needs to populate a new habitat is a single individual, you're totally boss. Sure, you're going to be surrounded by a bunch of copies of yourself for the rest of your life, but if you can't love yourself, then how the hell you gonna love somebody else? Can I get an amen up in here?!