Prince giveth, and Prince taketh away. On the same day that the Purple Rain writer shared a new track, HARDROCKLOVER, on his Soundcloud page, he also began removing his back catalog from music streaming services. The Purple One's music is no longer accessible on Spotify, and a note on his artist page reads: "Prince's publisher has asked all streaming services to remove his catalog. We have cooperated with the request, and hope to bring his music back as soon as possible." Billboard reports that his music was also removed from Rdio. 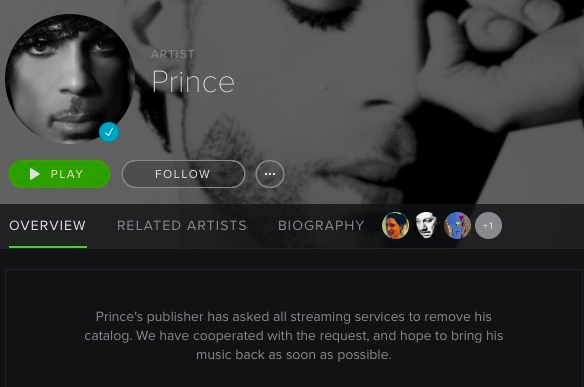 However, at the time of writing, Prince's music is still accessible on Google Play, Tidal, and Deezer. Whether or not these streaming services are exceptions to Prince's ire or just slow to respond to his publisher's request is not clear. (Additionally, his music has never been available on Apple Music.) This behavior is far from unusual though, with Prince playing similar vanishing tricks on social media and YouTube last year. In the meantime, fans will have to be content with his new single, although according to a report from Pitchfork, even this was briefly removed from the internet before being restored the same day.