Fewer American teens are having sex, but the teen birth rate is still high

Fewer American teens are having sex, but the teen birth rate is still high

Less than half of American teens over 14 have had sex

Less than half of American teenagers over the age of 14 have had sex, according to a new CDC study. That's a significant drop, compared with rates seen in the late '80s. And the teen birth rate has dropped by 57 percent since 1991. That said, teenagers still aren't using the most effective contraceptive, the IUD. And the US teen birth rate remains higher than that of other developed countries.

There were 273,105 teen births in the US in 2013. And unfortunately, teen childbearing can have some pretty negative effects on parents and their kids. For example, kids who are born from teenaged mothers are more likely to suffer from health problems, or drop out of high school; and only half of teen mothers receive a high school diploma before they turn 22. In addition, teen childbearing costs the public a total of about $9.4 billion a year, partly because of the cost of health care services and foster care. That's why figuring out when teenagers start having sex, and what contraceptive methods they're using matters; it's the kind of information that can be used to tailor interventions toward those who need them the most.

The results showed a pretty large decline in the proportion of teens who had had sex by the time they turned 20. Overall, 47 percent of boys and 44 percent of girls aged 15 to 19 reported having sex at least once — down from 60 percent of boys and 51 percent of girls in 1988. For both boys and girls surveyed, the percentage of teens who reported having sex was slightly higher than in the CDC's 2010 report, but that difference wasn't statistically significant. This means that the proportion of kids having sex before they hit their 20s is pretty stable right now. 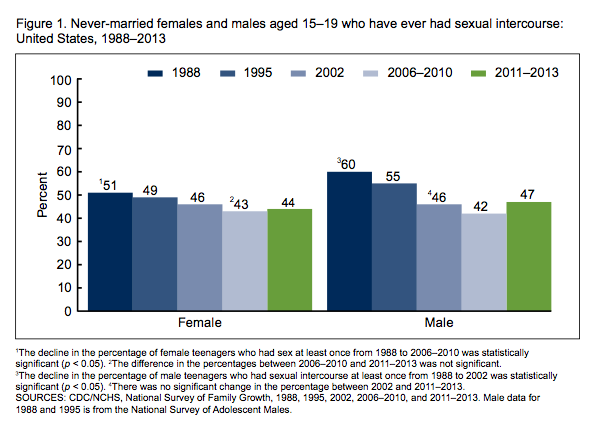 Of course, because these numbers are polled together, they don't tell the whole story. For example, 18 percent of boys and 13 percent of girls said they had experienced sexual intercourse before their 15th birthday. And by the time teenagers turned 19, a little over two-thirds of unmarried teens have had sex at least once. 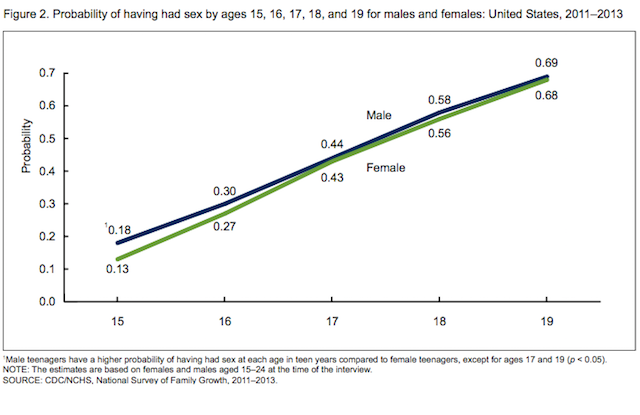 Only 3 percent of teen girls used an IUD

The study also showed that teenagers still prefer condoms over other contraceptives; 97 percent of teens reported using them. That said, the use of emergency contraception — also called the "morning-after pill" — by female teenagers increased to 22 percent in 2013, from 8 percent in 2002. As for the IUD, the proportion of young women who had ever used the device stayed largely the same compared with data from 2010, at around 3 percent. That's unfortunate; the IUD is the best contraceptive for teens, according to the CDC.

Thus, a 17-year-old girl is five times more likely to have given birth if she didn't use contraception the first time she had sex, compared with a girl who did. That's why making sure that teenagers have access to contraceptive methods early on is so important. We already know teens are having sex at an early age; more targeted interventions could help them avoid unwanted pregnancies.