If you’re not on Twitter, perhaps last night’s blockbuster of a beef-off has convinced you to change that immediately. After Nicki Minaj and Taylor Swift gave us an evening of drama better than anything HBO could produce, Minaj’s boyfriend and fellow rapper Meek Mill went straight for Drake’s neck, claiming the 6 God has a ghostwriter.

Stop comparing drake to me too.... He don't write his own raps! That's why he ain't tweet my album because we found out!

The whole game know forreal they scared to tell the truth! I can't wait tok these guys and sit back and act like they don't know!

If you don’t know, having a ghostwriter in hip-hop is a big taboo unless your name is Puffy or Dr. Dre. Such fakery carries harsh penalties if it’s discovered — you will be chastised by your peers, and your transgression will never be forgotten — but it still has a long history in rap, and the line between "collaborating" and "ghostwriting" isn’t always clear.

The line between "collaborating" and "ghostwriting" isn’t always clear

Big Pun wrote for Fat Joe in his early days. Jay Z wrote "Still D.R.E" for Dr. Dre. (At this point everyone who is a halfway decent rapper has written for Dr. Dre’s Detox album, which will be released shortly after the apocalypse.) It’s widely known that Kanye West was essentially the director of Yeezus, employing a team of writers to help him craft the lyrics. But while there are prime examples of ghostwriters being used, it’s usually never spoken about, and the top rappers in their prime — like Drake, Kendrick Lamar, and J. Cole — are expected to write their own lyrics.

Kendrick and j cole really know how to rap even tho they in different lanes .... Dude is all the way outta of it lol

He ain't even write that verse on my album and if I woulda knew I woulda took it off my album..... I don't trick my fans! Lol

Other artist know tho? lil Wayne and Nicki know ..... Ask em they gone act like they don't see them tweets

After claiming Drake didn’t write his verse on "R.I.C.O.," the best song off Meek Mill’s recently released sophomore album Dreams Worth More Than Money, he named Quentin Miller as the real voice behind Drake’s raps.

When he said the dream girl shit on Rico I thought he was coming at me lol Then youngbull played me the verse ... http://t.co/CWwLO2muK5

And it ain't about no tweet he ain't post my album and he on it because he know we found out! It's so much to it lol

Miller is a rapper out of Decatur, Georgia, who became affiliated with Drake’s OVO label in late-2014. There’s no doubt that Miller has been affiliated with Drake and his crew, and his work with Drake hasn’t been a secret either. Miller is credited as a writer on five tracks on Drake’s mixtape If You’re Reading This It’s Too Late including "10 Bands," "6 Man," and "Know Yourself."

The big question is how much influence did Miller have over Drake’s lyrics? Rappers routinely hold studio sessions where others in the room may contribute a better metaphor or help improve a hook or chorus and earn a writing credit off it. Even Meek can attest to it — the intro on Dreams Worth More Than Money's "Lord Knows" has four writing credits.

One of Miller’s songs off his mixtape Hey Thanks A Lot 2 called "Cinematic" (produced by OVO producer and Drake-cohort Boi-1da) sounds eerily similar to Drake’s flow. While the rest of his Soundcloud catalog doesn’t have the same vibe, "Cinematic" raises serious questions about Drake’s dependence on Miller. But so far, Meek Mill has refused to show any proof that Miller is really Drake’s ghostwriter, and not just another contributor.

@ComedianSpank I'm not saying nothing else!

I pray the real live forever and all the fake get exposed!

So what does this mean for Drake? If Miller really is his full-time ghostwriter, everything is a lie. Drake is one of two rappers (Kendrick Lamar) who has the catalog and potential to one day be called the greatest rapper of all time. Those types of artists don’t come around often, and using a ghostwriter this early in his career would throw a giant wrench into Drake’s ascendence into the hip-hop pantheon. Not to mention the flood of tears that the internet would shed when it realizes those Drake memes actually belong to a guy named Quentin.

You're no longer welcome in Toronto, @MeekMill.

If Meek Mill’s accusation is unfounded, however, he won’t be able to fully rebound from this. Going after the 6 God isn’t something you do lightly. Meek has started a civil war between Young Money (Wayne, Minaj), OVO (Drake), and Maybach Music (Rick Ross, Meek Mill), which up until yesterday were the closest artist-driven labels in hip-hop. He’s already dragged Nicki Minaj and Lil Wayne into his accusations against Drake, putting them in precarious positions. Rick Ross already tweeted and deleted a shot at Drake (Ross had some trouble with the less than, greater than symbols). Unless he’s absolutely right, Meek Mill has messed up the money for a lot of people, and it won’t go over well with any of them. 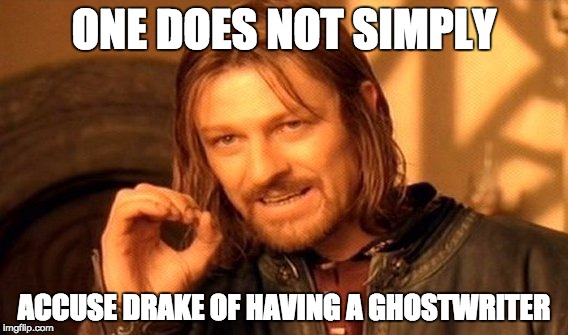 For now, turn those tweet notifications on — this is just getting started.

Update July 22nd, 8:30PM: A few hours after Meek Mill made his claims, Hot 97 DJ and perennial bomb dropper Funkmaster Flex released the reference track for "10 Bands" featuring Quentin Miller rapping most of Drake's first verse. While this still doesn't confirm that Miller is Drake's ghostwriter, things are not looking up for the 6 God.

Update July 22nd, 10:40PM: Drake's best friend and longtime producer Noah "40" Shebib went on a tweetstorm denying that Miller is Drake's ghostwriter, stating that he's only spent "maybe 30 minutes in the studio with Q." Shebib also pointed out that Drake has written hit songs for other artists, and called him "maybe the most personal rapper ever," and someone whose writing skills should never be questioned.

No one can question my involvement in drakes career. We have come a long way together. So let me start by putting something into perspective

I can't count the hours that myself and drake have spent writing producing and recording music. Let's just say... 5000 hours...

If your asking if q contributed to if you're reading this the answer is yes. You can also read that in the credits.

Anyways, I don't work with many people. And there's a reason....

No one is as talented as drake. It's not worth my time. I need someone who understands song writing on a higher level...

Sometimes that skill is used to recognize other great songs... Like in all forms of music... Except rap.

Rap has a stigma about writing your own lyrics and rightfully so... its a very personal art form and its rooted in speaking truthfully.

Thankfully for me drake isn't just a rapper. He's also a musician and a producer and a creator.

We go beyond the normal boundaries that rappers want to sleep themselves stuck in.

We've been fighting those rules from day one. If no one noticed there weren't many singing rappers in '08

Theres countless number ones and songs drake has written for others never mind himself, thats the funny part lol!

never has someone spoken about themselves or there own perspective so vividly... ever.

its why people have called him soft... because he shows humility and is truthful and honest.

you're smokin that shit you say you selling if you think someone wrote that shit.

so if someone wants to be upset that drake made a great album, go for it, get mad all day lol! but don't ever question my brothers pen.