Boa constrictors don’t kill the way you think they do

Boa constrictors don’t kill the way you think they do

No, boa constrictors don’t kill prey by asphyxiating them — they stop the flow of blood instead

Source The Journal of Experimental Biology

Researchers have demonstrated for the first time that constrictor snakes kill by stopping the flow of blood inside their prey. That approach is so efficient that animals don't survive long enough to die from asphyxiation — the method that most scientists thought was the correct "cause of death" in constricted prey. The finding, published in the Journal of Experimental Biology, likely means that many a biology textbook will need to be revised.

Until now, researchers had never actually directly tested how constrictors kill their prey. A few researchers suggested in the '80s and '90s that circulatory arrest — stopping the flow of blood — was the correct method by which constrictors killed prey. But most of the literature over the last century actually hypothesized that prey died from suffocation, says Brad Moon, a snake researcher at the University of Louisiana-Lafayette, who didn't work on the study.

That's why today's paper is important; it might finally put a nail in the coffin of scientists' previous, breathtaking assumption.

Asphyxiation, by definition, is absence of ventilation. So when an animal gets asphyxiated, that doesn't interfere with the heart, which continues to pump. Because of that, animals continue to benefit from what little oxygen is stored in the blood, at least for a short while. "But if you stop the flow of blood then you absolutely cannot deliver oxygen to the tissue," says Scott Boback, an animal ecologist at Dickinson College and a co-author of the study. So all things considered, circulatory arrest is much deadlier.

Researchers used boa constrictors and rats to find out how these snakes kill their prey. First, they inserted a number of electronic sensors inside anesthetized rats, to see what happens when a boa starts to squeeze. Vascular catheters measured the blood pressure inside the circulatory system, while electrodes measured the electrical activity of the animal's heart. The snake itself was also equipped with a device that can detect the pressure that the snake is generating around the rat. "All of these wound together in a bunch of these wires and tubes coming out of the rat," Boback says. Eventually the snake would strike, and the experiment began. The rats were unconscious throughout.

"Wires and tubes coming out of the rat."

The researchers found that when boa constrictors kill a rat, they squeeze hard enough to interfere with the animal's blood pressure, blood gases, blood ion balance, and heart function. "Constrictors stop the flow of blood in their prey, and that's causing death," Boback explains. "And it's happening at a rapid pace." 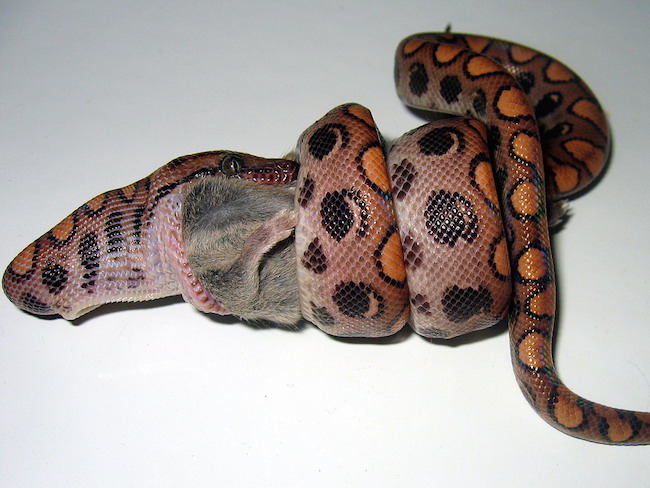 The study provides a "more detailed explanation than ever before of how constriction subdues even large and strong prey so quickly and effectively," Moon says. That said, Boback and his team only looked at how boa constrictors kill rats that are about 25 percent of their size, so there's still a possibility that this result is only relevant for mammals, or mammals of a certain size. That's why Boback plans to repeat the study with lizards or frogs.

"They're cold-blooded," he says, which means their metabolic rate is pretty low. "​So if you have a lizard that doesn't maintain a high metabolic rate, then what's going on there? What would happen if you constricted the lizard?" he asks. These animals don't use oxygen in the same way that mammals do, so it's possible that they don't die in quite the same way when they're squeezed.

Inducing circulatory arrest in prey probably serves two purposes, Moon says. Because circulatory arrest seems faster than suffocation alone, killing a rat by cutting off its circulation might help the snake avoid severe harm from the rat's teeth and claws. In addition, knocking an animal out quickly likely reduces the amount of time and energy that a snake has to spend hunting and eating a single meal. Thus, a more efficient kill frees up time for mating or looking for more food. "Those activities are less immediate than handling a current prey animal, but they're still important over the course of the snake's life," Moon says.

For scientists, constrictor snakes have always come across as marvelous hunters. Armed with highly acute sensory abilities — they can detect prey heartbeats, for instance — they're fast and powerful predators. Still, it seems that humans may have underestimated them. Constriction is actually stronger, faster, and more effective than most researchers thought.

More from Verge Science: Italy's eels have a cocaine problem