You’ve been using antiperspirant the wrong way all this time

You’ve been using antiperspirant the wrong way all this time

Until last week, I used antiperspirant like a klutz. My wallet and undershirts suffered because of my ignorance. Yours need not suffer, too.

For 17 years, I had followed the same steps every day. After my morning shower, I applied two or three clicks of an antiperspirant stick. This sufficed. During my years in New York, sweat never manifested into a swampy, humiliating dilemma. Because I had to walk everywhere, deodorant wasn't good enough, but generic antiperspirant more or less did the trick. On days that reached the mid-90s, dark stains, shaped like the Great Lakes, formed on the T-shirt, just beneath my armpit, which I accepted as part of life.

But in Texas, where the temperature will pass 100 just for giggles, the routine began to falter. After a few weeks of having Lake Erie and Lake Michigan running down my sides, I upgraded to clinical strength antiperspirant. And that failed, too.

Use antiperspirant right before you go to bed

Desperate, confused, and smelly, I tried something daring and read the directions for proper application. On clinical strength antiperspirant, and on countless health websites, you will find this simple, easy, seemingly illogical advice: apply antiperspirant right before you go to bed.

The problem with applying in the morning is that your body is more likely to sweat before the antiperspirant has had time to — ahem — clog those ducts, and so you find yourself sweating through the rest of the day.

I know I'm not the first person to write about this. Not even close. This is simple-to-explain, easy-to-use advice. I'm sharing it again, because despite the tip being all over the internet — and on the box of antiperspirant — almost everyone I speak with about this is shocked to learn the truth about nighttime application.

Join my colleagues and me and test the method. Why would they participate? Because this Slack conversation reveals they too have being doing it all wrong. (Also, Russell is correct. I mean antiperspirant when I say deodorant.) 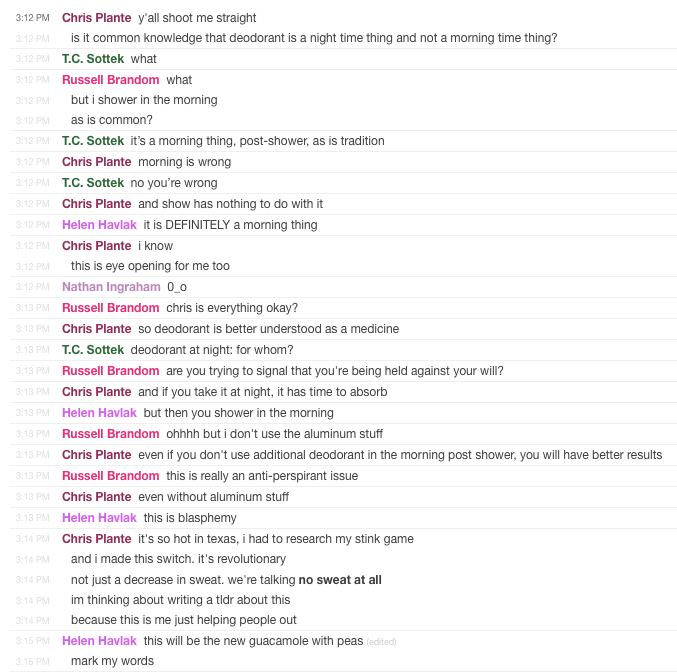 Correction: The story was originally shared on Twitter with a photo of Tom's of Maine deodorant. Tom's of Main is a non-clogging deodorant, not an antiperspirant.