Before Wet Hot American Summer, there was Stella: a beginner's guide to the forgotten web series

The long-awaited prequel to Wet Hot American Summer premieres this week on Netflix. The original film has developed a cult status over the past 14 years, but another project featuring the film's creators and many of its stars has been overlooked. I hope to, in some small part, change that.

This is an introduction to Stella — a guide for people whose favorite part of Wet Hot American Summer is the drug-induced trip to town.

I think so. The group's most accessible 5-minute short, which stars Paul Rudd, is a handy test. If the dick and shit jokes don't hit their mark, Stella probably isn't for you. If you're like, "This was good, but would be better if they tripled down on the dick and shit stuff," then oh just you wait.

Have a look for yourself:

Here's the rub. I love the dick and shit jokes — I really do — but I'm also a stickler for integrity in the media. Is there some sort of conflict of interest slushing beneath this piece, like a frozen river of bias?

Yes. My wife has worked for Wain, Showalter, and Black at different points in her career.

Stella triples down on the dick and shit stuff

They haven't, like, bought you a donut or anything, have they?

Black once bought me a peanut butter and jelly donut, but then left the donut at his hotel, so I never ate the donut.

I appreciate your transparency, especially about that donut. Continue with the brass tacks.

Thanks. Long before I met the trio, around 2003 or so, high school me discovered the raunchy Stella videos online. The sketches had been uploaded to Stella's site after they appeared in the troupe’s regular live show at Fez, one of countless Lower East Side clubs that no longer exists.

Like Fez, Stella was of its time. Three young comedians fresh off a television contract, suddenly free of corporate guidelines, make absurd, spitfire, filthy comedy in a small club. They could get away with anything, so they did.

Like, they could build an entire sketch about David Wain having passionate sex with his cousin, and it wouldn't really become a thing on Twitter.

Well pal, if you’re over 30, you probably remember all three from The State, the aforementioned sketch show, which ran on MTV in the early 1990s. Other members of The State include Ken Marino, Joe Lo Truglio, and Thomas Lennon.

From the comedians who made Wet Hot American Sumer

Whatever happened to The State?

The State cast — 11 members large — couldn't remain a colossal sketch unit forever, not at that size. After The State went off the air, the comedians formed smaller sub-groups for projects like Reno 911, Viva Variety, and of course, Wet Hot American Summer, written by Wain and Showalter.

I love that movie! I can't wait for the Netflix show to premiere!

Wait a gosh darn minute. Is the episodic prequel to Wet Hot American Summer, premiering this week on Netflix, just a peg on which the author may hang his Stella fandom?

Journalistically speaking, sure. Though this story will feature plenty of other pegs. Wink.

Why'd you just wink at me?

You were making a pun.

Wain was the director of Wanderlust, They Came Together, and Role Models. Showalter wrote the IFC film The Baxter, and co-wrote and starred in Michael and Michael Have Issues with Michael Ian Black. That show, which aired on Comedy Central, was also written by Kumail Nanjiani (Silicon Valley) and Jessi Klein (head writer and executive producer for Inside Amy Schumer). Black has written a number of books and films, including Run, Fatboy, Run, and is currently a regular on The Jim Gaffigan Show and Another Period, which also stars Wain.

Come on, you've watched at least one of those things on your laptop.

Who uses a laptop? I only use the mobile web.

I'm looking at these Stella videos on my phone and there's something weird going on. Did my contacts dry up?

No, your contacts are perfectly moist. The bits are 15 years old, so my recommendation comes with some caveats. For one, Stella's entire web oeuvre was made before YouTube. The audio and video have a "slightly better than a home movie" quality. 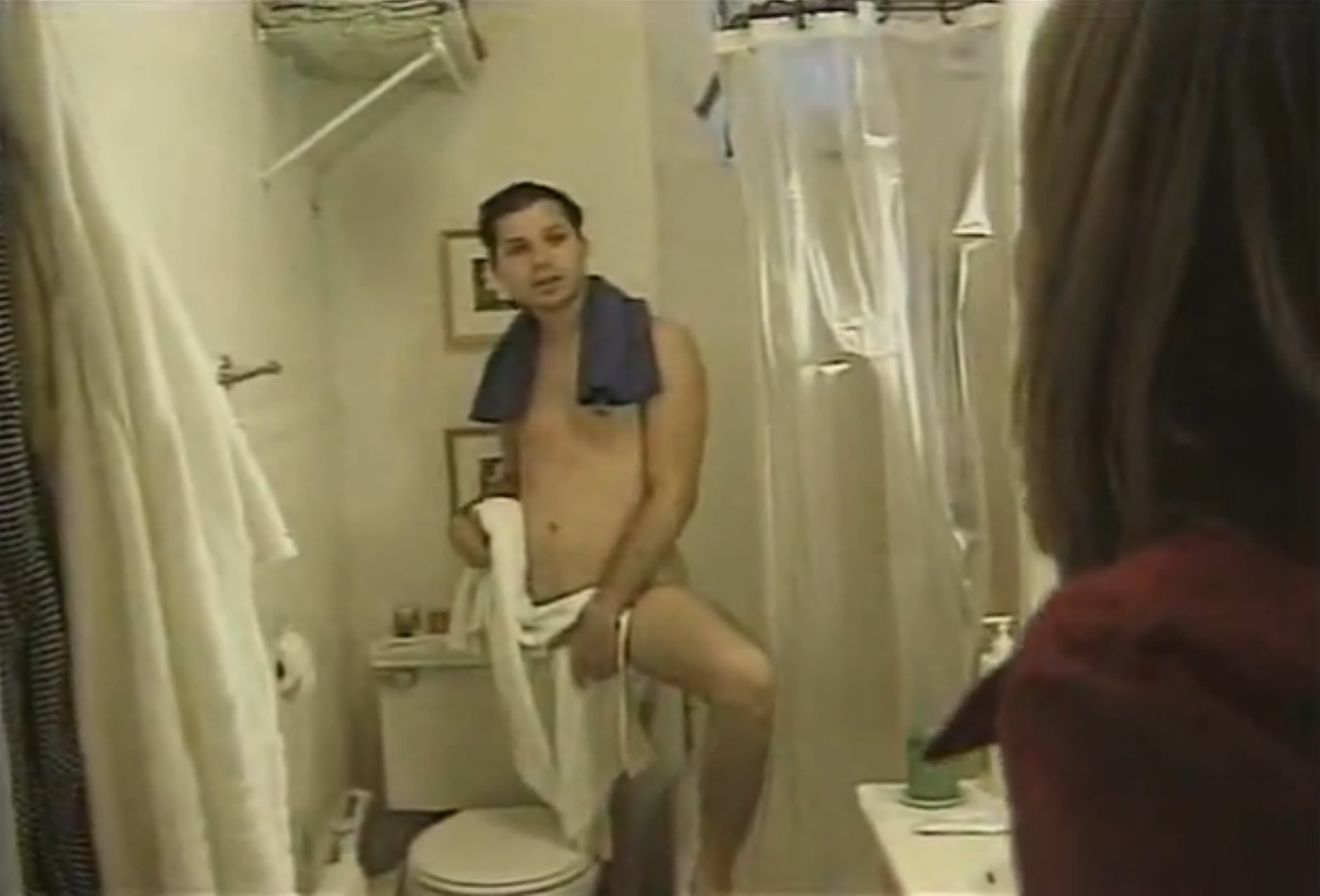 Something else is off, and I just can't... quite... I don't know what it is about them, but I feel kind of guilty finding parts of this funny.

That's the other issue: A handful of the bits that I loved in high school don't quite work today. Maybe I think they're too repellant. Or maybe I'm just old. I see why some people might take offense to some jokes.

I think there's a value even in the most dated shorts. Stella's videos speak to their time and place in popular culture, anthropological evidence of how the rise of YouTube and its strict content policies, along with the surge of progressive culture — both for better and worse — have changed what we expect and accept from web comedy.

Stella is an artifact from this brief window when the ease of web video production allowed comedians to make things too offensive to get past film and television ratings boards, and before a time when they would consider making different jokes all together, rather than including a throwaway gag at the expense of good taste or human decency.

Is Stella really that offensive?

No, not really. Or at least, I don't think so. It's just that there's so much humor involving sex and gender, and I feel no way equipped to unpack it. I'll leave that criticism for someone else.

Stella is a parody of middle-class life

If movies like Airplane and Top Secret are parodies of genre movies, Stella is a parody of middle-class life. The targets are as big and soft now as they were then: boring wine conversations, workspace chatter, empty referential humor.

A recurring line is, "I believe in God. I mean, I don’t know if he’s a guy with a long, white beard or anything, but I do believe there’s something out there." I think I've heard someone say that near the end of every office holiday party.

They're poking fun at...

Our need to constantly be saying something because we're terrified conversation will lull for even a second, and everyone will realize we're total frauds.

The home video production quality adds to the effect. At the end of the first skit, you can hear the guys laughing off camera. In another skit, Showalter mugs right into the lens. Stella shorts play like inside joke videos you might have shot with friends in college, except outsiders don't have to be in on any secret backstory to enjoy the punchlines.

Isn't that too deep of a read? Aren't you doing the thing the videos are making fun of? 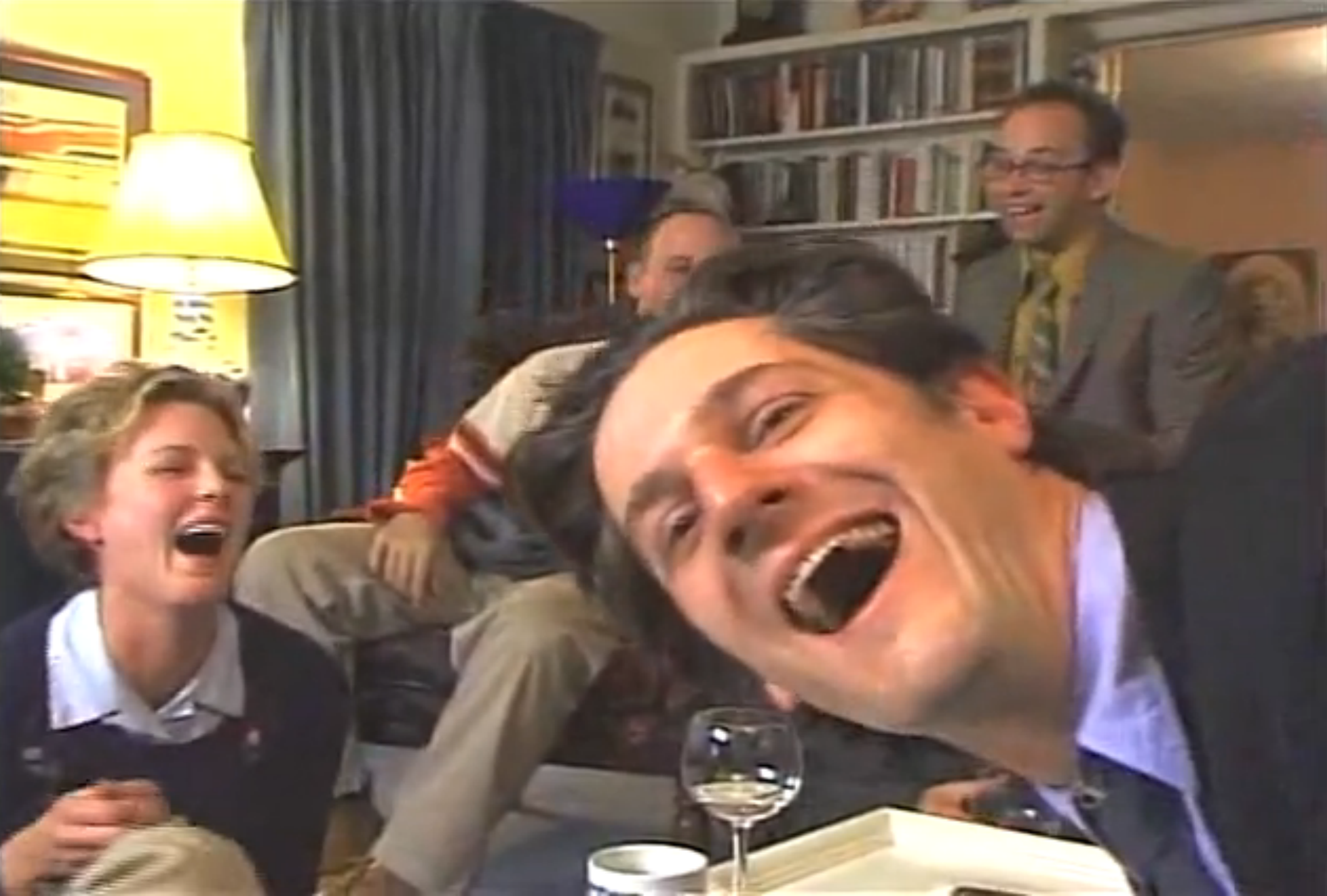 Kind of, but not really. But kind of. But mostly not really. Like It's Always Sunny in Philedelphia, the leads are despicable monsters who do bad things, but you sort of love them for that. And tonally, the videos hits some of the same notes as Kids in the Hall.

Stella is like a series of vaudeville comedy bits strung together by the thinnest excuse for a plot. Take for example the first episode: the gang goes hunting, but really that's just one long series of goofs that set up an extended corpse-humping joke.

That's what you meant by "sex humor"?

That's just the tip of the corpse-humping iceberg.

You mean someone humps a corpse again?

Two episodes later a half-dozen men and women hump a dead man, recently struck by a car, while telling that dirty boy how much he likes it.

Does anybody hump an iceberg?

Say I'm the sort of person who wants something like that corpse-humping stuff, but even more alienating?

A half-dozen men and women hump a dead man

So, the most divisive Stella bit, by far, stars Zack Galifianakis as Santa Claus. You get to see his tushy. It's called "Searching for Santa," and I'm not going to embed it, because I know someone will screencap a certain scene appearing on the site and that would be bad for everybody.

What's so bad about "Searching for Santa"?

Cannibalism, a Gaza joke, and also a lengthy scene in which all three members of Stella suck Mrs. Claus' fake penis on camera.

Yes, they're really into holidays. 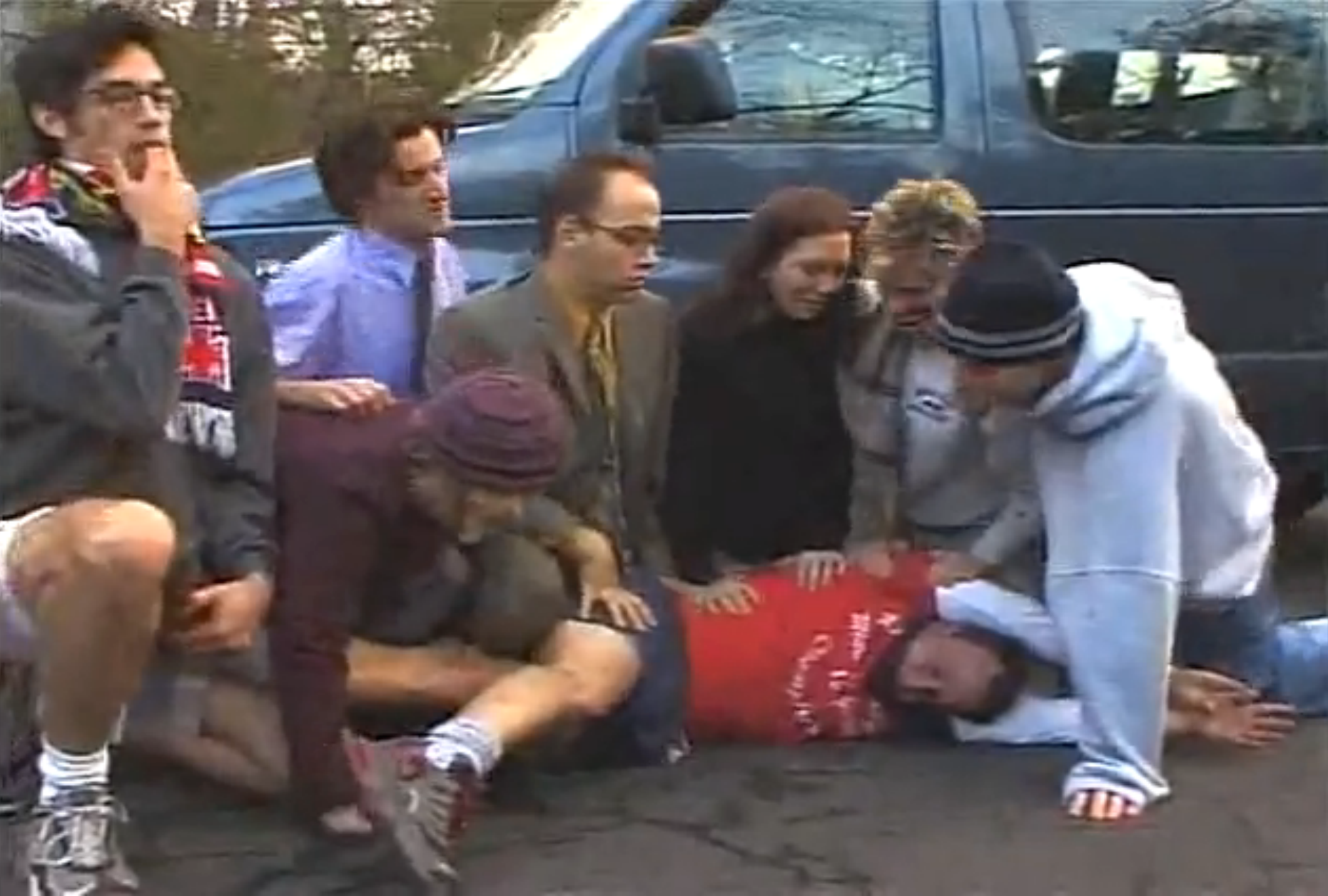 Is there a Stella sketch I can watch at work?

"A Day Off from Work" is the least offensive Stella video. It’s just the guys playing with a dog in slow-motion for two and a half minutes.

Comedy Central produced one season of a Stella television show called Stella. Less crude, but for the most part, just as funny. The whole season is for sale on DVD on Amazon.

Will we ever see the original videos on DVD or Blu-ray?

The Stella videos were collected about a decade ago for a now out-of-print DVD release called Stella Shorts 1998–2002. We probably won't see another run of that DVD, let alone a Blu-ray print. There’s rampant use of unlicensed music throughout the videos, including songs from Alanis Morissette, James Taylor, Toad the Wet Sprocket, and "Seasons of Love" from the musical Rent.

Then where can I watch everything?

Currently, all 25 videos are available on their barebones website.

Perfect. I'll give them a watch when I'm not at the office.

Hey, any chance you have a clipping from the July 1997 issue of New York Magazine promoting their weekly show?

Funny you should ask, because I do. 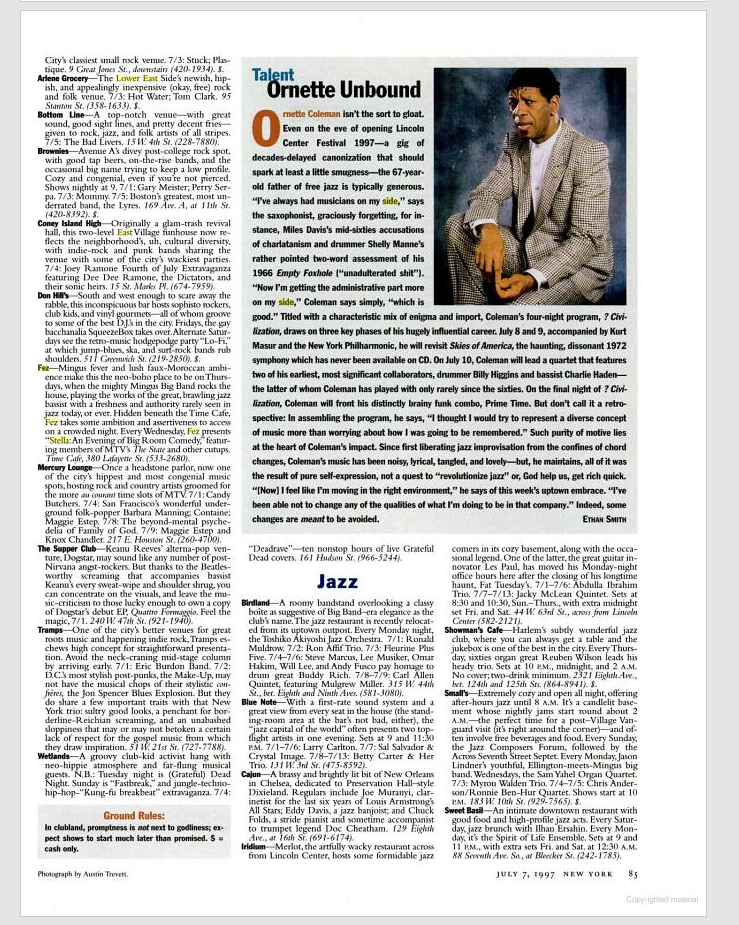