Motorola just announced the latest version of its flagship Moto X, which is now called the Moto X Style. It looks a lot like last year's Moto X, but it comes with a bigger, higher resolution display and a new, 21-megapixel camera. It's going to be available this September for $399 unlocked. And this time around, it will work on any of the major carriers in the US.

Motorola is making a big bet and some weird branding decisions with the Style. In the US, at least, the bet is that consumers will spring to buy it directly from Motorola, Amazon, or Best Buy. We confirmed here that it will not be available in any carrier stores. That's the bet, and at $399 unlocked it's a pretty solid deal for a flagship phone — but we'll have to see where US consumers are finally ready to buy phones this way in large numbers. The weird branding decision: the Moto X Style is going to be called the Moto X Pure in the US. That's because market research has told Motorola that US consumers care a ton about "pure" Android — apparently more than they do about Style. But other than the difference in radio bands between the US and the rest of the world, Motorola says they're the exact same phone.

Motorola's biggest claims for the Moto X Style are about the 21-megapixel camera. We've only had the briefest of moments to play with it and our first impressions is that it is fast. Very fast. Lighting is hit and miss here, of course, so we need more time to really say what we think of it. Motorola has set up an entire photography station here at its event, and we'll be sitting through the long line of reporters to check it out very soon.

It feels much smaller than you'd expect

The phone has a 5.7-inch screen but feels remarkably smaller that it ought, thanks to the very thin bezels on the left and right. The screen is pushed about as far to the edge of the phone as it can be, minimizing the overall footprint of the phone itself. I'm still not convinced that I could use this phone comfortably in day to day use — my time with the similarly-sized Nexus 6 was fraught with drops and fumbles — but if you can live with a 5.5-inch phone, you can likely live with the 5.7-inch Moto X.

Aside from size, the display is bright with great viewing angles and it's impossible to see any visible pixels. We won't know until we've got a review unit in hand if it has some of the odd color casting that plagued Motorola's earlier models, but initial impressions are quite good. 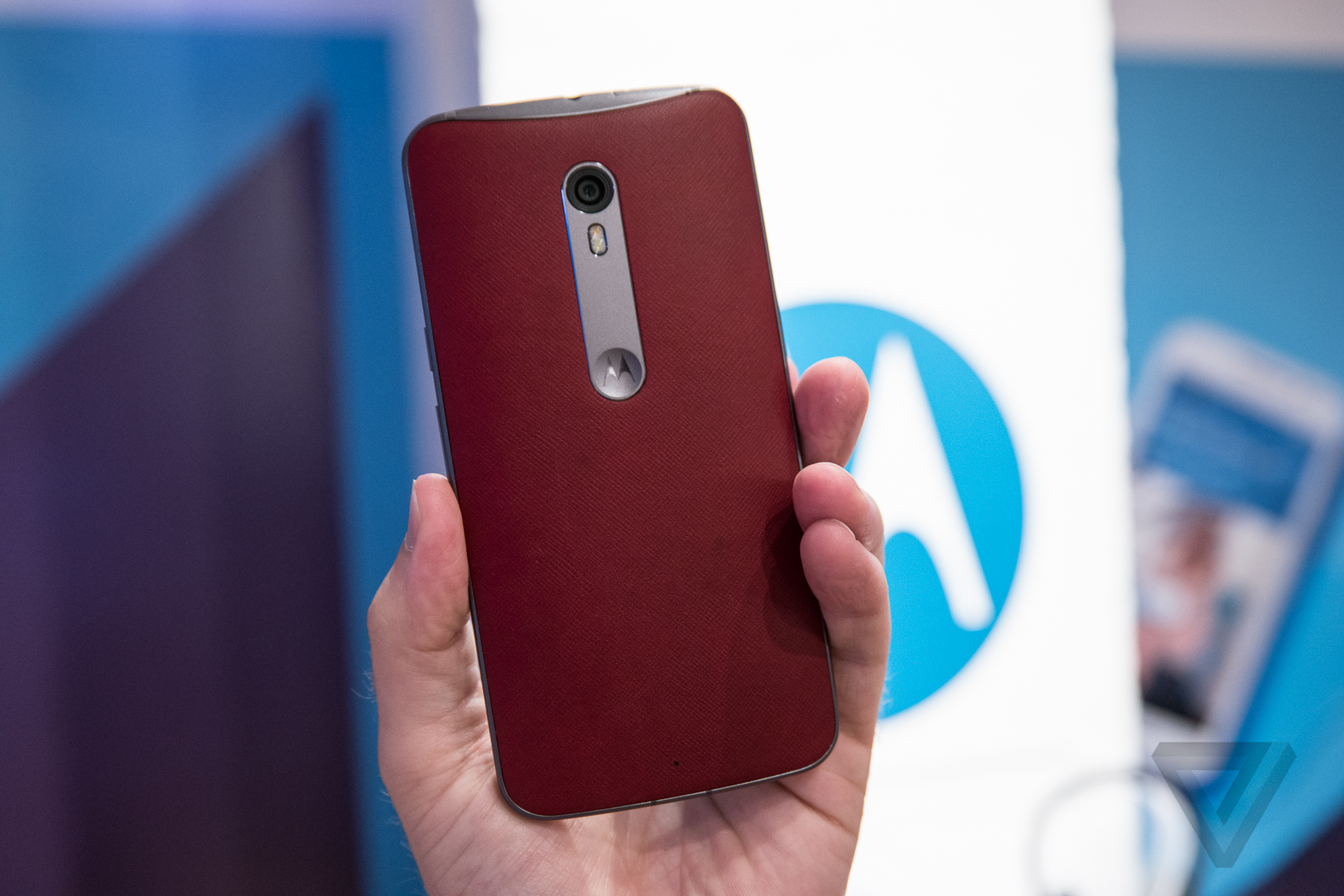 Performance also seems to be really good — the new X is snappy and responsive. That's likely helped by the near stock version of Android 5.1 that it is equipped with, which Motorola is once again using as a selling point. There are a few customized apps included, but they are largely limited to Motorola's camera app, Assist, Connect, and a handful of other basic services. It's still the most pure version of Android you can get this side of a Nexus.

There's not too much more to say about the Moto X Style at this point — the optional wood and leather finishes feel just as great as last year, and it's still a very well-built device. The Style has the signature curve that Motorola puts on all of its phones to make them more comfortable to hold, and it has a nice dimple on the backside to rest your index finger when holding the phone in one hand.

Perhaps the most important story is the price — at $399, Motorola is aggressively undercutting the competition and even beating some of the other players in the low-cost flagship smartphone space. It's within spitting distance of the just-announced OnePlus 2, and less than the recently announced ZTE Axon. That's sure to be an appealing offer for those that want to buy their phones unlocked and without a commitment, but it remains to be seen whether or not this is aggressive enough to get the rest of the smartphone buying population on board with unlocked devices.

Motorola won't be selling the Moto X Style until September, but we'll be sure to put it through its paces when it's available to see if it does indeed live up to Motorola's lofty claims.