We've said it once and then said it again and won't stop saying it: the camera matters, especially on Android, where the points of differentiation between flagship phones are becoming increasingly small. The Galaxy S6, HTC One M9, LG G4, and the new Moto X Style (or Moto X Pure Edition, if you live in the US) are all universally fast, well built, and (for the most part) have better-designed software than ever. That leaves the camera as the main sticking point, and luckily we've seen great progress from Samsung and LG (HTC: not so much). The last of the big four Android makers to check in is Motorola. And it's checking in with some very big talk about its camera quality.

At today's event, Motorola's head of design, Jim Wicks, laid his cards on the table in no uncertain terms: "We're extremely excited about the camera. It's the best we've ever built and one of the best in the world." Later, another executive went so far as to cite an article here at The Verge about how the camera is the main thing that matters. And Motorola even handed the Moto X Style to a couple of camera sites to review. So how'd it turn out?

Pretty good! If you're the sort of person who puts a lot of stock in quantitative analysis of camera performance, DxOMark has charts aplenty that detail how the Moto X Style performed in its tests. The summation is a score of 83, which places it behind the Galaxy S6 Edge and Note 4, but above the iPhone 6 Plus.

But these kinds of numbers are hard to equate with real-world experience — especially the "just give me a quick photo without hassle" kind of experience most people demand from their smartphones. It's an area where Apple has often excelled and Android has had trouble. The difference can come down to a wide variety of factors, many of which boil down to software choices and post-processing. Luckily, DPReview got a chance to take some sample photos, a couple of which are reproduced below. (Head to DPReview for the full images and the breakdown of their thoughts.)

The gist is this: "Image detail in bright light is impressive, and in lower light a well-balanced approach to noise reduction means that a lot of detail is preserved while noise isn't getting too intrusive," according to DPReview. That seems like a fair assessment, but I'm not quite ready to give the Moto X Style full marks just yet.

The question is low-light performance. The Moto X Style has a 21-megapixel sensor, and basic optics will tell you that the more pixels there are, the smaller they are. When the pixels get smaller, low-light performance tends to suffer. (That's the defining principle of HTC's bet on low-megapixel "ultrapixel" sensors.) At its event today, Motorola set up three booths to show off its camera sensors, including its wide-angle selfie camera, HDR mode on the Moto G, and lastly its low-light performance. It's there where I saw what could be a warning sign. 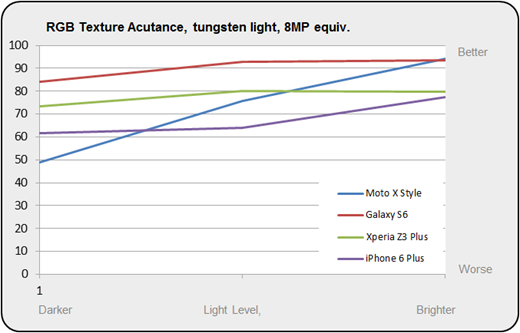 Measuring low-light detail preservation. Note the drop off for the Moto X Style on the left. (DPReview)

The setup was designed to compare the Moto X Style's camera performance with the Galaxy S6. With phones mounted on tripods, the Moto rep took a shot with flash to show the differences. Sure enough, the S6 didn't seem to perform as well. There was a purple haze around the tungsten lightbulb in the scene, and the white balance was a little bit off compared to the Moto X Style. That's all good news! The bad news for the Moto X Style is that when I took the shots myself without the flash, it exhibited a lot more noise. The ostensibly flat white wall was mottled with tell-tale pixels. It's possible (actually likely) that the difference came down to Samsung more aggressively post-processing that noise out — but whatever the cause, the noise was there.

The bar for camera performance on a flagship phone has been raised significantly in the past year, and by all indications the Moto X Style has cleared it. But whether it lives up to Motorola's vaunted claims still remains to be seen. As I said, I'm optimistic based on what I've seen and on what DPReview and DXoMark say — but we won't know for sure until we've seen (and done) more testing.