Designed for Hollywood, not consumers

When Microsoft bought Nokia's handset business in 2013, two big questions hovered above all. The first was "why?" and we never got a convincing answer: Microsoft wrote off $7.6 billion in Nokia costs this month, higher than the purchase price. The second question was what would become of the rest of Nokia, which had just exited the business it had once dominated. The company said it planned to focus on maps, network infrastructure, and "advanced technologies" — but what those technologies would be went unsaid.

Today Nokia is beginning to lay out its vision. At an event for the entertainment industry in Los Angeles tonight, Nokia is announcing Ozo, a next-generation camera for capturing audio and video in 360 degrees. Nokia intends for the device, which is now in its preproduction phase, to become the default mode of shooting virtual-reality experiences for Hollywood, the media, and the advertising industry. A formal launch, along with a final sale price, is planned for the fall. But Ozo is not a consumer camera — the device is expected to sell in the mid-five figures.

For Hollywood types, Ozo has a number of selling points. It’s a camera that lets them make VR in real time, thanks to a pair of key features. The first is live monitoring: directors can view footage as it's being shot on a headset. The second is rapid playback. In the past, VR footage needed to be digitally stitched together before it could be viewed, a process that could take hours. Ozo can render lower-resolution video for playback in as little as a few minutes, Nokia says.

Possibly the most advanced VR filmmaking platform yet

When it debuts, Ozo will join a nascent but rapidly developing market for VR creative tools. In May, after acquiring a VR company, GoPro announced it was building a spherical camera mount to record immersive video. Later that month, the company announced a separate 16-camera system designed to be used with Google Jump. Jump, announced at the Google I/O developer conference, intends to be a full-featured ecosystem for VR filmmaking. Samsung is building a camera rig as well.

Nokia says Ozo is the most advanced VR filmmaking platform yet. It certainly looks amazing — a spherical rig the size of a large cantaloupe, roughly 6 pounds, with eight optical image sensors spaced roughly an eye width apart. Audio is captured in three dimensions by eight microphones embedded in the camera, and the result is audio that helps to locate you in space. If you hear a dog barking behind you in Ozo-produced VR, look behind you — you'll see the dog.

Ozo affixes to a standard tripod and outputs video in standard formats. You can watch Ozo video on a headset like Oculus' or as a 3D video posted to a site like YouTube. The goal was to make a system that would integrate into filmmakers' existing workflows, Nokia executives said, and not to trap them in proprietary file formats. 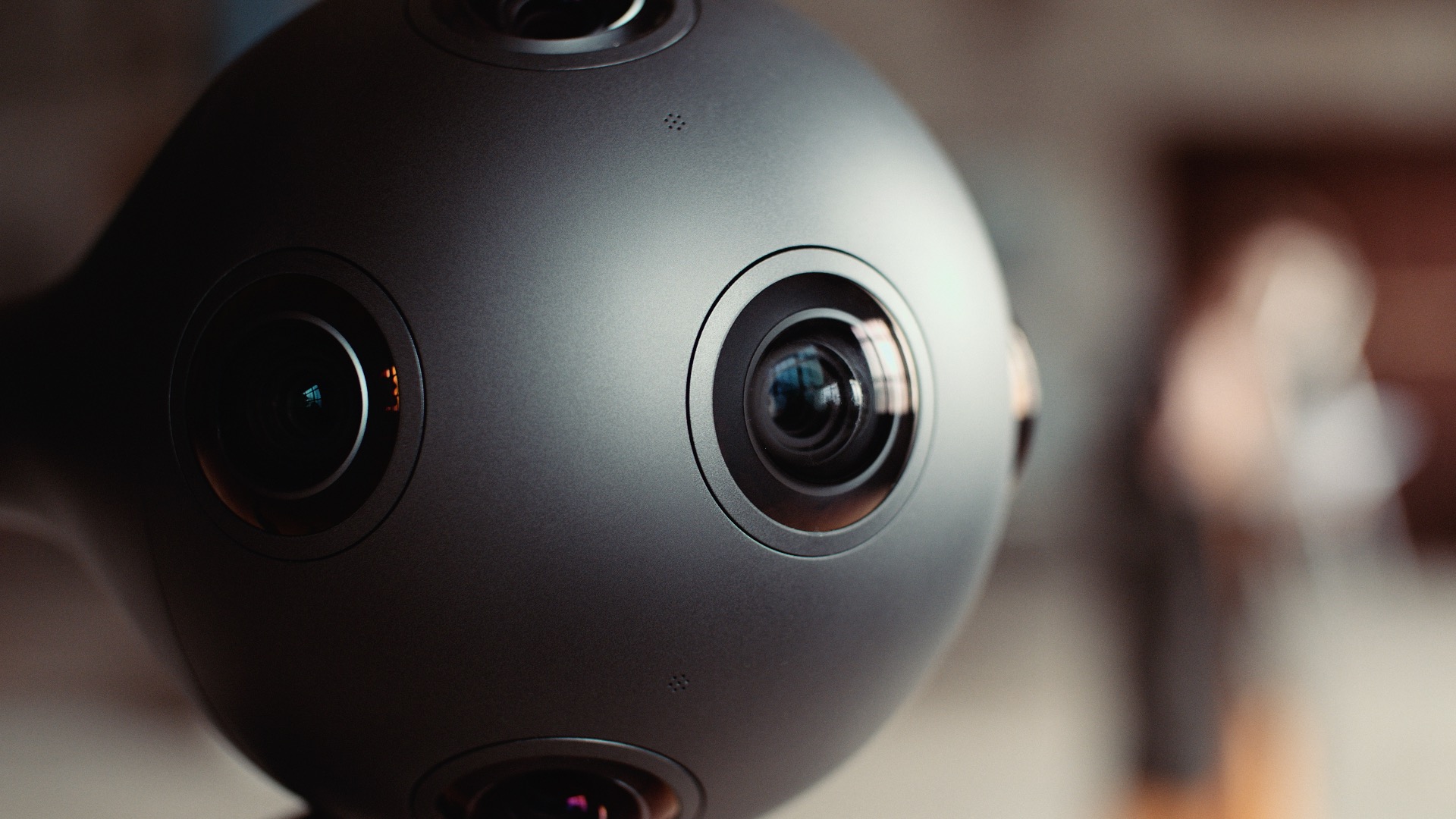 Jaunt VR, a leading VR studio that's building a camera of its own, has agreed to be one of Nokia's first partners for the device. It will have them on hand at its studio, where it works with companies like Conde Nast to produce VR film.

Prior to tonight's event in LA, Nokia showed me a pair of demonstrations of Ozo's capabilities. The first was a trio of movie clips showing different kinds of experiences. One, a news clip, showed a reporter interviewing people at a demonstration following the legalization of gay marriage in the United States. The second was a scripted comedy in which a man interrupts a friend's wedding to confess he is in love with her. The final clip was a music video in which the singer pulled on a rope in front of her, gradually dragging the viewer toward her.

The demos took place on Oculus Rift and HTC Vive headsets, and the footage sometimes appeared muddy and out of focus. Nokia says that in part, this is because the clips we saw were being rendered live from the raw data recorded by the camera, as opposed to film that had been digitally stitched together and smoothed out in post-production. That also explains the sometimes awkward transitions I saw when my field of vision moved from one image sensor to another: these "discontinuities," as Nokia head of research and development Vesa Rantanen calls them, result from the way the camera is arrayed. But they, too, can be eliminated in post-production, he says.

A wild way to experience film

The sound, however, was another story — I found myself constantly looking around in each clip, because the sound seemed to track my position. I would hear something behind me, and when I turned I would see the still-moving mouth of the person talking. That's because Nokia's audio rendering technology recreates binaural audio live based on the direction of your gaze. It's a wild way to experience film, and the best of what I saw from Ozo tonight.

VR may seem like a big departure for Nokia, but it’s the clearest sign yet that the company doesn’t intend to just fade away. The division that is behind the Ozo, Nokia Technologies, also designed the Nokia N1 tablet that was manufactured by Foxconn. Nokia Technologies is also expected to create an Android phone, The Verge has learned. Recode reported the division's plans to get back into phones last April.

Certainly the market for high-priced professional VR rigs is smaller than the market than for the consumer phone business Nokia once dominated. But it's not the first time the company pivoted — Nokia, which turns 150 this year, began life as a paper mill. Today a lot of smart money is finding its way to virtual reality. With Ozo, Nokia could be in a good position to capitalize.