I ate crab bisque cooked by a robot chef

Speed and consistency: these are the two qualities that Tim Anderson says he most values in the kitchen. As a former UK MasterChef champion and head of a forthcoming Japanese-soul food fusion restaurant in London, Anderson knows what he’s talking about. Right now, though, he’s in a slightly unusual kitchen, watching a pair of outsized robot arms methodically preparing a crab bisque, electric motors gently whining. The robot’s movements are unhurried rather than speedy, but you have to admit it’s consistent. In fact, Anderson says the real problem might be that it’s too consistent. “This is where the robot is a problem, intuition.”

The robot is the creation of Moley Robotics, which first unveiled the bot earlier this year at a tradeshow in Germany and is now looking for investment. The bot works by using motion capture technology to record a chef in action — in this case, Anderson, wearing a pair of sensor-lined gloves. These movements are then converted into instructions for the pair of robot arms, which can, in a specially prepared kitchen, cook without any input. Users just line up the ingredients, hit the button, and receive their food 20 minutes later. It’s only a prototype right now, but the company’s founder, computer scientist Mark Oleynik, wants to start selling it commercially in 2018 with an estimated retail price of $75,000 (including the kitchen).

Right now though, Moley’s invention is more automaton than sci-fi robot butler: there’s no machine vision, no artificial intelligence involved that might react to unexpected inputs. If the placement or weight of the ingredients are wrong, then the whole recipe can fall apart. The robot only has a limited set of actions it can perform at the moment, as well. Its first recipe — the crab bisque — was chosen partly because it’s a "crowd pleaser," says Anderson, but also because "it’s got a lot of movements that have applications for other recipes."

Tim Anderson stands next to the prototype robotic kitchen.

"Stirring, pouring, blending, and labeling are all part of it," he says. "If you can make a bisque, you can make a lot of other things, like soups, stews, curries, sauces. Anything that goes in a saucepan and gets sweated off we’ve got sort of covered now; we just have to remix the movements." However, there’s still a lot of work to do in this area. Chopping, for example, is not part of the demo, and although the robot was able to turn on the stove, handle a blender, stir, pour, and spoon, this still leads a lot prep work for humans to do.

Rich Walker, the managing director of Shadow Robot Company, the firm responsible for supplying the robot’s hands, compares processing the motion capture that guides the bot to working in a sound studio. "It’s like recording the same song multiple times and then stitching the best bits together, smoothing out the transitions." He points to a fleck of garlic on the side of the induction hob. "That happens every time," he says. "But that means it’s working. That means it's reproducing the motion of how Tim did it exactly." 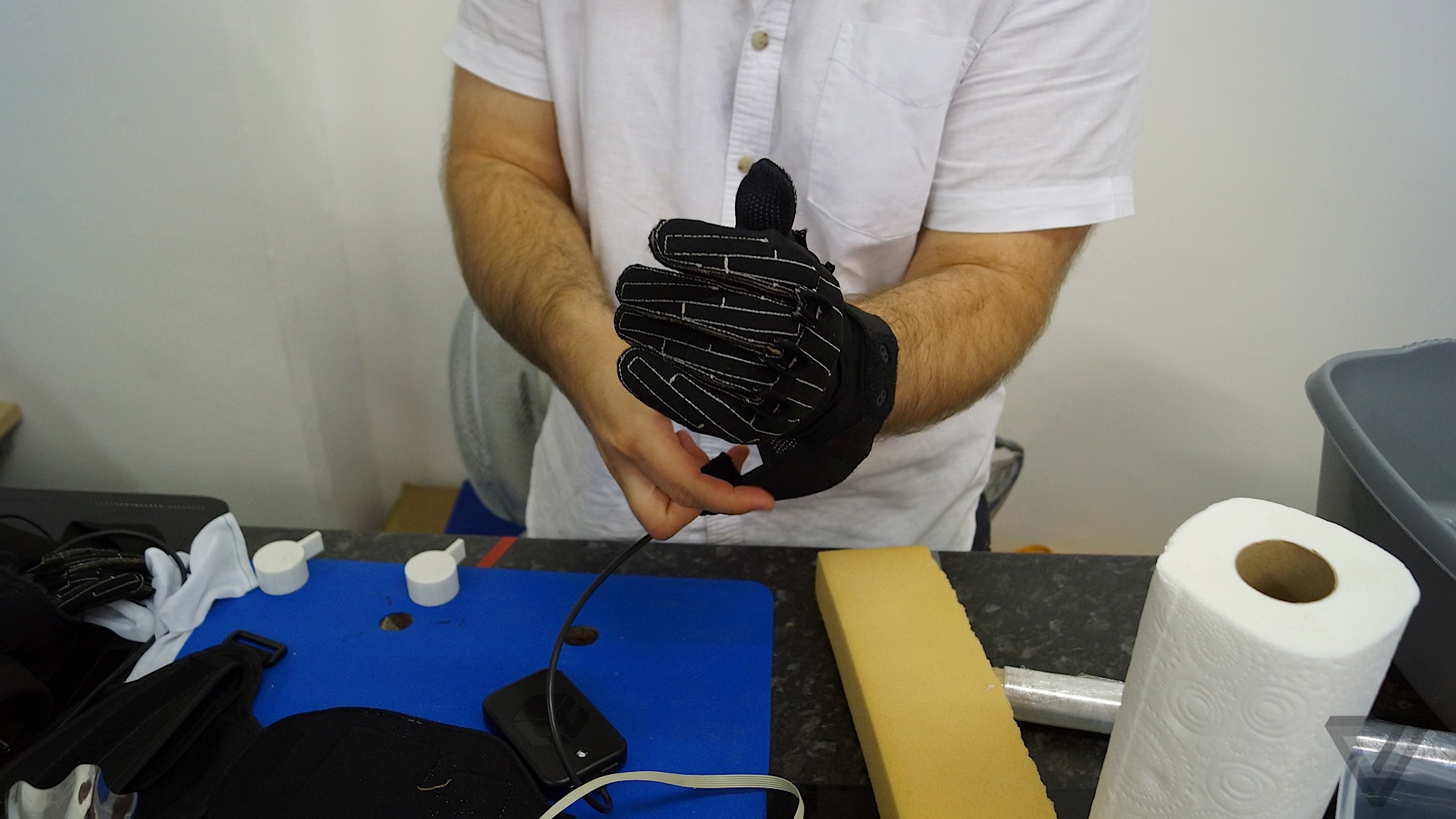 One of the motion-capture gloves used to record Tim Anderson's movements.

Without perception or feedback mechanisms, the robot’s consistency can become a problem. Anderson says that in China, for example, the team had to adapt to regional variations in food quality. "At one point the butter wasn’t going into the pan," he says. "This is the problem, something like the viscosity of butter: if it’s not sliding off the spatula as it should, the robot has no way of knowing that and dealing with it." Moley’s engineers say they’re exploring how they can incorporate machine vision in the future, but in the next two years — as they get ready to launch commercially — the focus is on "proper motion expansion and food preparation." Within a year or so they want the robot to be able to take ingredients out of a fridge itself rather than the user lining them up, but it’s a long way from full comprehension. Oleynik says this lack of adaptability won’t be a problem as long as the robot can get precisely prepared ingredients.

I ask Oleynik who his customers will be, expecting the answer to be "millionaires," but he’s insistent that the robot has mass appeal. For $75,000, he says, customers aren’t just buying the arms, but a "universal kitchen combine" that will be able to make any dish they like using the recipes and movements of famous chefs. The kitchen itself can be used by humans when the robot isn’t doing its thing, and Oleynik says the arms are really just another appliance — one that will make life easier for people who want to eat well. "This is my vision of the future, and I think if you show some kind of target to people, then they start dreaming and thinking and they want to have it."

Right now, Oleynik is looking for investment. Overall, Moley Robotics wants to raise $5.5 million this year, and a further $11 million in 2016 before they start selling the robotic arms commercially in 2018. The company says it’s in discussions with a fast food chain, an airline catering service, and a property developer in China, with the latter reportedly considering kitting out its luxury homes with robot chefs. However, says Oleynik, at the moment there’s still more development needed before solid offers materialize. The hands are too heavy, he says, and the arms are too industrial. The whole outfit is, in his opinion, not yet human enough.

It’s not really the appearance of the robot that’s the issue, though, it’s the lack of computer smarts. Not only does this lead to more work for the user — precisely preparing and arranging the ingredients — but I wonder if it undercuts one of Moley’s other selling points: that its robot delivers something distinctly human, with the motion capture acting as a conduit for the chef’s spirit and skill. Even if everything goes to plan, the robot produces exactly the same dish every time. Philosophers have already explored the question of the work of art in the age of mechanical reproduction, but what about the work of pudding?

The pair of arms plating up for dinner in Moley’s test kitchen offer a silent argument in favor of a robot chef. There’s something unquestionably fascinating about watching something mechanical mimic everyday movements, and the robot is all the more engaging for being nearly fluid, nearly human. As the arms unceremoniously dump a pile of crab meat into a bowl and begin spooning over the bisque, Anderson watches on a little anxiously. After all, it’s not just his recipe on display, but his robot-translated skills as well. "Not bad, not bad, not bad," he says, after a spoonful of bisque, passing it over for me to taste. He’s right: and it’s not just not bad, it’s good. If I was served it at a restaurant I wouldn’t blink an eye. Although I might be a bit taken aback if I met the chef.