GoPro's Hero 4 Session is its smallest camera ever

Our raft hit a rock about one mile into the white water rafting trip down Colorado’s Eagle River. One of the groups in front of us had blocked the path, so our guide was forced to steer us into riskier waters. The rock wasn’t enormous, but our speed and the impact were enough to send me backwards over the side.

The moment that my raft-mate pulled me back in, my mind was focused on only one thought:

Strapped to my hand was GoPro’s new camera: the $399 Hero 4 Session, available next week. It’s cube-shaped and measures less than 1.5 inches long on every side. It shoots 1440p video at 30 frames per second, 1080p up to 60 frames per second, and 720p up to 100 frames per second. It’s waterproof up to 10 meters so it doesn’t require a bulky housing, which made it the perfect camera to stick on the hand that I was using on top of my paddle. It got the shot. 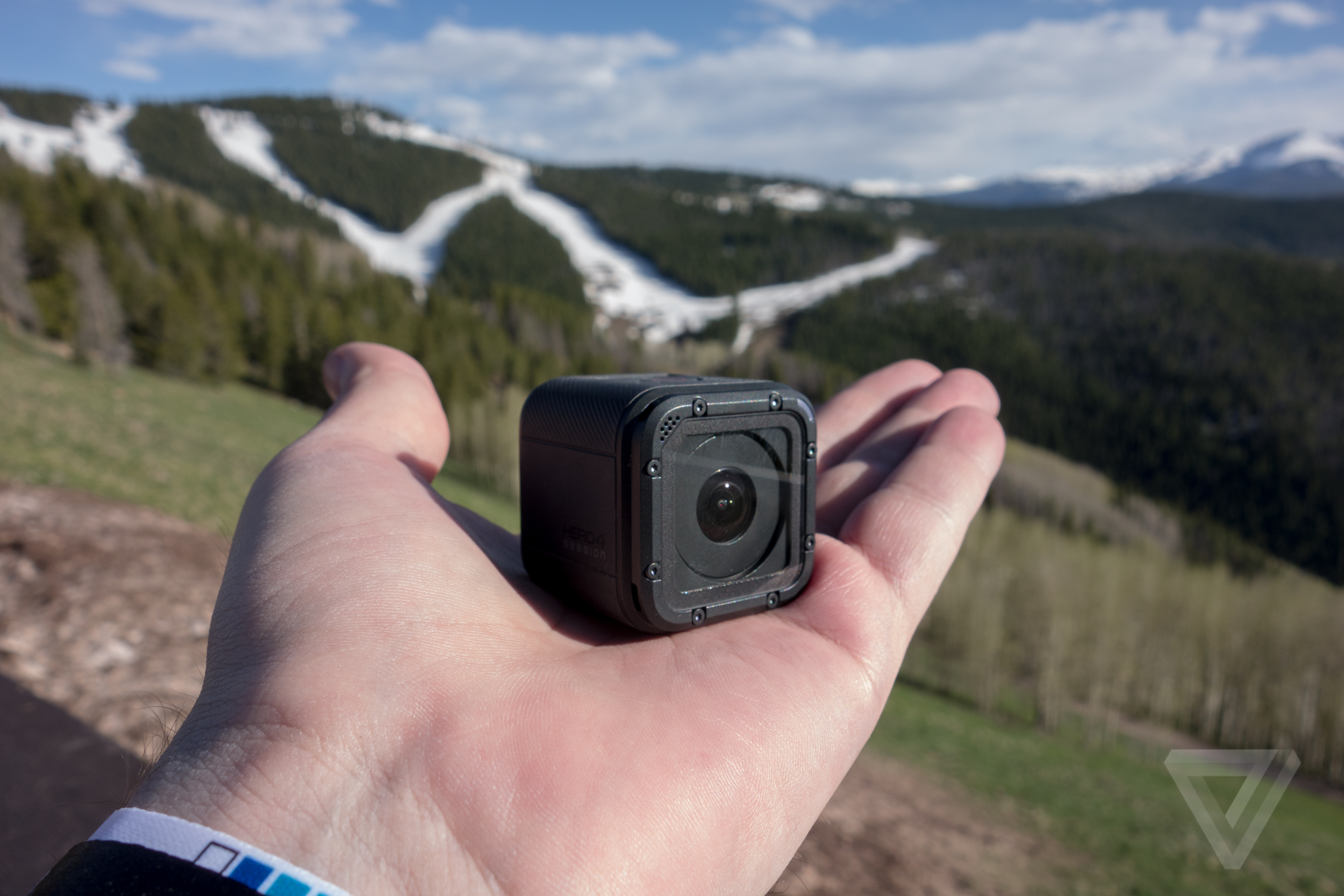 You operate the Session with one button, and it helps save battery

This helps with battery life — a problem GoPro has long battled with its cameras. The Session’s internal battery should last between one to two hours running consistently, but turning it on and off each time stretches the battery life much further. When I started the hour-and-a-half rafting trip, the Session had two-thirds of its battery life remaining, and by the end, it had outlasted a fully charged Hero 4 Black and Hero+ LCD.

A 3-second press-and-hold on the main button will trigger a time-lapse photo mode. If you want to shoot single or burst photos, however, you have to change to these modes in the GoPro app. The only other button on the Session is for turning the camera’s Wi-Fi on and off.

In fact, to change any settings on the Session, you have to use GoPro’s app or the included Wi-Fi remote. That’s probably for the best, considering there are only two buttons and just one tiny screen on the camera. But GoPro has improved the ease of its on-camera menu system over the years, so if you’ve gotten used to changing your settings on the fly, it could take some time to acclimate to the Session.

One of the biggest benefits of the Session’s small size is how much harder it is to notice, no matter where you mount it. GoPro has also slimmed down its cameras over the years — the Hero 4 Black and Silver, in particular, are very light and small — but when you snap them into a housing and mount them to a helmet or to your wrist, you definitely still feel them when you’re moving around.

The Hero 4 Session is waterproof out of the box

The Session, on the other hand, is waterproof out of the box. It does use a small skeleton case (much like the frame mount the company sells for its bigger Hero cameras, but cubed) in order to attach it to the various mounts. I mounted it to my hand during our rafting trip and could barely feel it as we sped down the river. A bigger Hero 4 stuck inside a waterproof housing would have been much more cumbersome.

Ditching the need for a housing also solves another long-standing problem with GoPro's cameras: the audio. The Session has two microphones — one on the front, and one on the back — and it dynamically switches between them to reduces wind noise. They never get muffled, and they're built to drain liquid fast, so the audio even sounds good when the camera comes out from underwater.

As small as it looks on its own, when you place a Session next to a naked Hero 4 Black or Silver, they don’t look that much different. Put them in their various mounts and cases, though, and you can’t help but notice how much space the Session saves you.

GoPro CEO Nick Woodman says the company worked on the Hero 4 Session for three years, but some tradeoffs still had to be made in order to condense it to such a small size. It can’t shoot in 4K. It can’t shoot in incredibly high frame rates such as 120 or 240 frames per second, which limits your options for shooting in slow motion. And it only takes 8MP still photos — a resolution your phone can likely match or beat.

If you don’t already own an action camera, the Session might not be the first one to buy. For example, there’s GoPro’s own Hero 4 Silver, which is priced the same and is definitely more robust. The Silver has a built-in touchscreen LCD screen, can shoot video up to 2.7K at 30 frames per second, and at 720p can shoot in 120 frames per second slow motion. The Hero 4 Silver also shoots higher resolution stills — 12MP to the Session’s 8MP — and can take them much faster, reaching speeds of up to 30 images per second.

But there’s a lot to love about the size and simplicity of the Session. It fits in so many more places, the battery will last longer than any other GoPro (though it can’t be swapped), and if you’re not obsessive about frame rates and resolutions you’ll probably be just fine with the excellent 1080p/1440p footage it does capture. All of this is certainly the bet that GoPro is making with the Session. "I think this is going to expand our customer base," Woodman says. "I think a lot of people still scratch their head when they look at our cameras."

Other action camera companies have a hard time keeping up with GoPro’s high-end cameras, but they still offer some competition at the low end. Garmin’s new VIRB X ($299) and XE ($399) cameras offer similar shooting capabilities as the Session, and Sony offers a number of good options at different price points.

Where GoPro still wins is the ecosystem. GoPro maintains a robust line of accessories and mounts for its cameras, and the third-party market for accessories is deep. It’s similar to buying a particular brand of camera body because you like the lenses the company makes. Choosing a GoPro competitor likely means you’re limiting the flexibility of shooting with an action camera.

The Session slots right into that ecosystem. For some, it will be the smaller and longer-lasting camera they’ve been looking for. For others, it might be the dead simple action camera they’re finally ready to use. Either way, this little camera is about to turn a lot of heads.