Please keep your hacky 'It's an app!' jokes to yourself

If you felt a slight disturbance in your app store of choice overnight, here's an explanation: Disney and Lucasfilm are releasing a free official Star Wars app for iOS and Android this morning. The app is breaking new ground for the franchise, which has largely stuck to the province of mobile games and activities to this point. This Star Wars incarnation is more of a clearinghouse, a one-stop shop for news, history, media, activities, and some trifles for series die-hards. Disney and Lucasfilm are also tying the app's release to their presence at this year's Comic-Con festivities, where fans can use the app to jump into an AR interaction with characters from the series' universe.

I had the chance to field test the app yesterday afternoon, and while I enjoyed my time within it, I'm not yet convinced that it has the depth to merit sustained activity from casual fans. You can sign in using a Disney / ESPN / ABC account, which tripped me up for a second — I ended up excavating a username I haven't seen in years because it was tied to my email address, so you might have to recover your info in the same way. After getting in, you can select a theme (either droids, the light side, or the dark side) to customize the app's look and feel, and you're given access to its full suite of features.

Those features are split down the middle between informational and interactive. In the former category, there's Star Wars-themed weather reports for your location — I'm told it feels like Alderaan here right now — news and video feeds that aggregate from the Star Wars website and official social media outlets, pieces of daily Star Wars history, and a countdown to December's The Force Awakens. These all feel necessary, but none of them are engaging, and it's hard to imagine someone adding a few extra clicks to their morning weather check just so they know which Star Wars planet is comparable. With that said, this portion of the app could quickly turn essential if it's used to break news as opposed to just collecting it. There's a precedent for that kind of move on Disney / Lucasfilm's part: Topps' Star Wars Card Trader app revealed new information about characters from The Force Awakens when it was released in March.

The best parts of the app are the ones where you can either share stuff with friends or bring the universe to life using your phone's features. The GIF and soundboard sections are robust, and GIFs are auto-copied to your clipboard for pasting into your message app of choice. (This worked well for me in a few tests.) You can't copy and paste bits from the soundboard, but you can make a collection of your favorites for easier access. The Star Wars selfies are also tailor made for sharing, offering a range of environments and characters. If you want to see yourself as a fighter pilot or as Princess Leia, this is your chance. 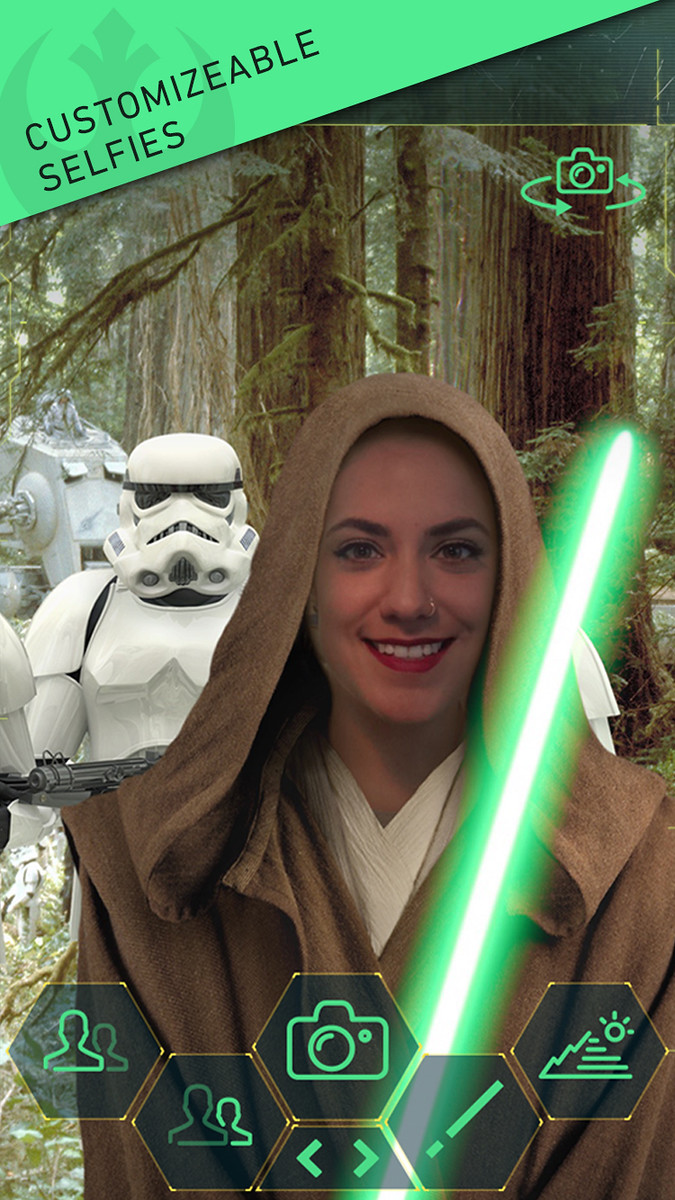 There are some fun AR activities, too: a Force Trainer mini-game that turns your phone into a lightsaber, and a poster that you can scan to create a virtual Stormtrooper or BB-8. The full-sized version is only available at Comic-Con for now, but I was able to scan the poster out of my Gmail tab and plop a little Stormtrooper on my keyboard. His range of motion and dialogue was somewhat limited, but hey: a Stormtrooper on your keyboard! You can try it for yourself using the poster below. 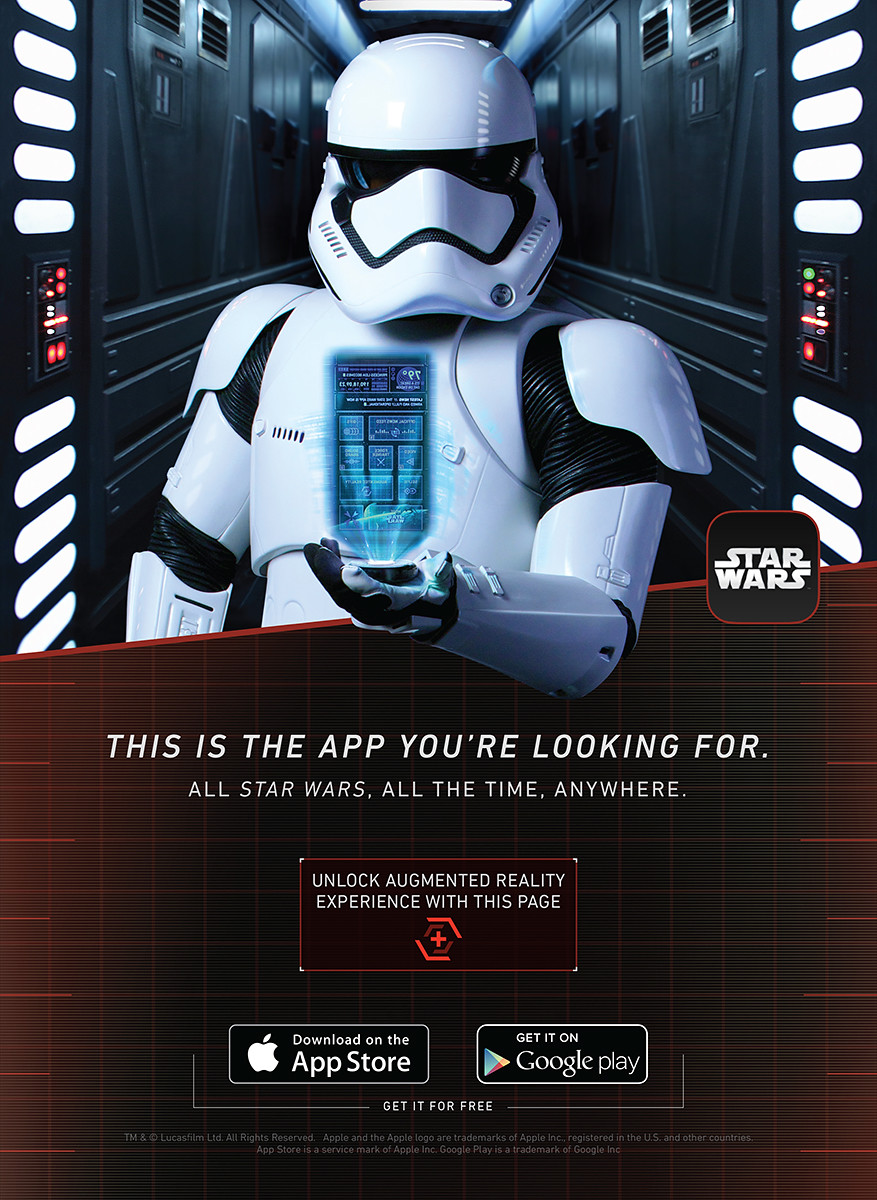 Disney and Lucasfilm are promising to keep the app fresh through new updates and features (including more unlockable AR characters), and I'm sure those updates will increase in frequency as The Force Awakens approaches. As it stands, the app makes for a fun diversion for serious and casual fans alike, even if the latter might not stick around for daily use. You can check the app out yourself if you're running iOS or Android, and keep an eye out for our coverage of the Star Wars Comic-Con panel at 8:30PM on Friday night.