Selling Android tablets is hard, so Sony is trying something new

Netbooks didn’t have a lot going for them, but they had a clear purpose. Their cramped keyboards, dull displays, and feeble processors couldn’t detract from their eminent usefulness as fast note takers and convenient web browsers on the move. Sony’s Xperia tablets — and tablets in general — have the opposite problem: they’re blessed with all the advantages of high design and precise engineering, but none of the purpose of the humble netbook. This year, Sony is addressing that issue by pairing its latest Xperia Z4 Tablet with a keyboard dock and essentially creating the netbook of the future. It’s a 10-inch ultraportable machine that runs Microsoft Office and promises long battery life, and it has the potential to serve as Android’s answer to Apple’s MacBook and Microsoft’s Surface computers. Can the addition of a keyboard give real meaning to the existence of yet another splendidly thin and powerful Android tablet? 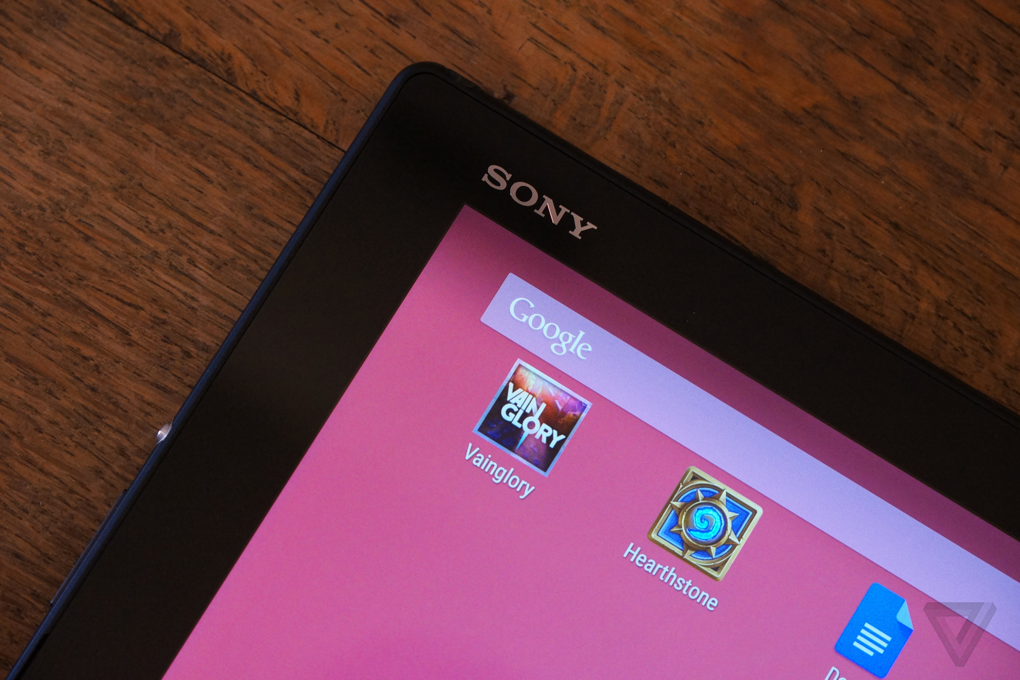 In spite of its name inflation, the Xperia Z4 Tablet is actually the successor to last year’s Xperia Z2 Tablet, and very little has changed in the way it looks and feels. This is still one of the best-engineered electronic devices on the market, feeling featherweight and durable at the same time. That’s is an important and powerful combination, as it allows you to toss the tablet around like a literal notebook, not having to worry about the added fragility of it being a piece of high-tech equipment. 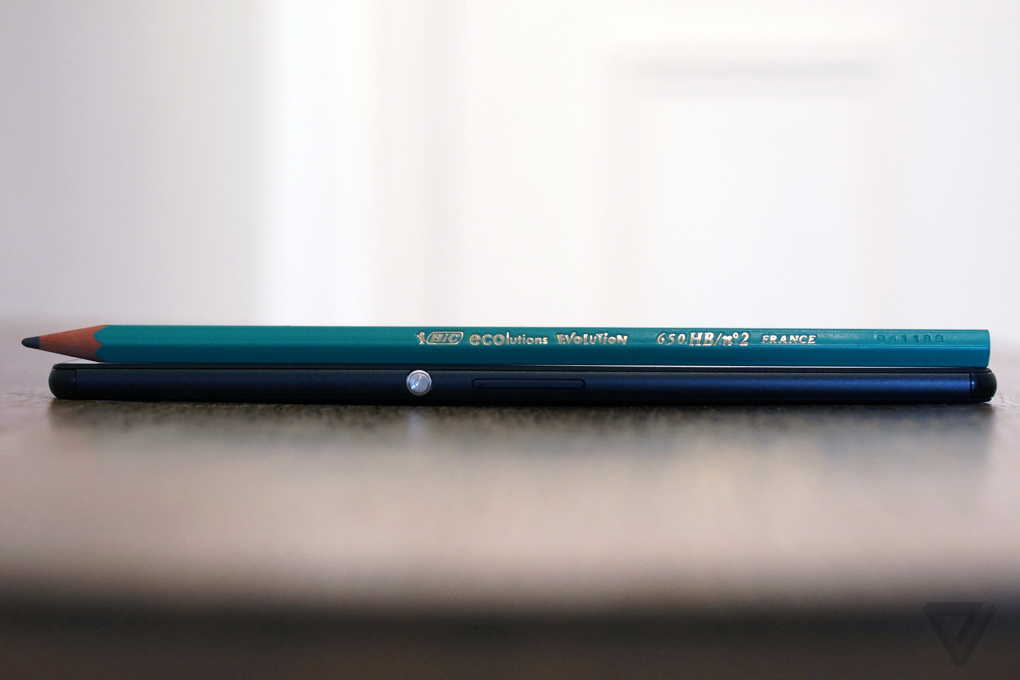 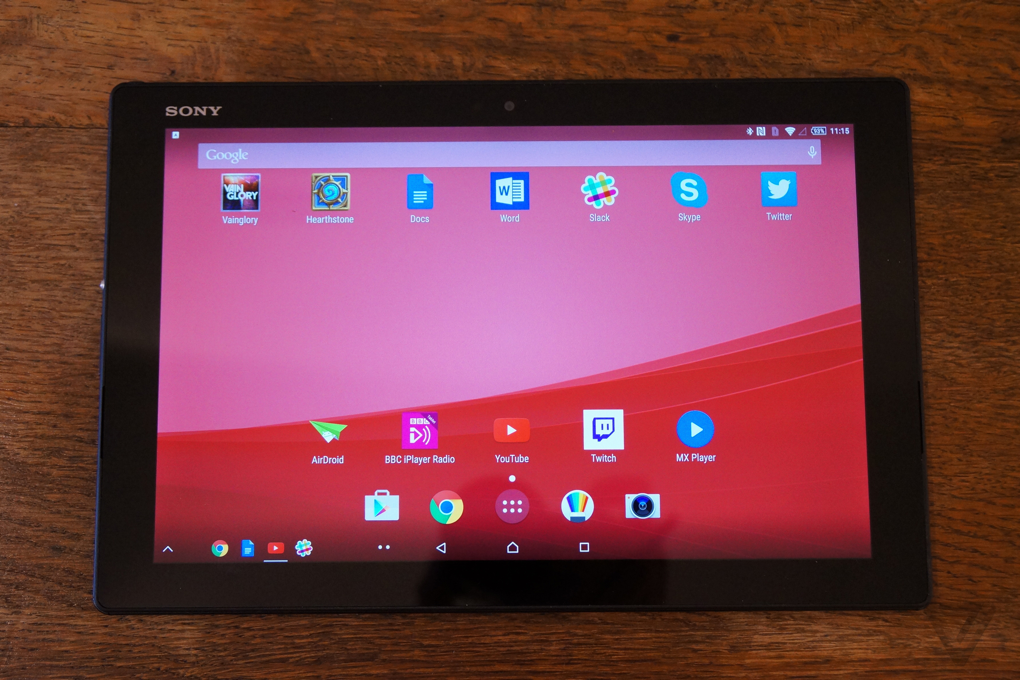 Waterproof once again, the Z4 Tablet has evolved to now also include a capless USB port, removing the annoying flappy cover of its predecessor. Sony has also taken out its engineering razor and somehow found a few spare millimeters and grams to shave off the tablet’s weight and thickness. In response to user feedback bemoaning the vastness of the bezels around the screen, Sony has shrunken those down as well. Such a tale of small incremental improvements is characteristic of Sony’s Xperia development history, and it’s how we’ve arrived at excellent devices like the Xperia Z3 and Z4 smartphones and the present Z4 Tablet. I look all around the device, investigate every edge and surface for imperfection, and find none. But I also don’t find anything (other than the more convenient USB port) that I couldn’t get from last year’s model.

Sony will tell you that the Z4 Tablet’s biggest upgrades are contained within, with a new 2560 x 1600 display stepping up the resolution from 1920 x 1200, and the Snapdragon 810 processor replacing the earlier 801. Good luck trying to identify where those changes make a difference, though, as I sure couldn’t. As much of a believer as I am in high-resolution displays, Sony’s upgrade here is from high to very high, and, like the mountaintops of Everest obscured by cloud cover, I just can’t see the difference. Performance is similarly unremarkable: this is a fast and responsive Android device, but that’s no longer a novelty like it once was.

New processor and new display, but not really a new device

The new processor and higher-res screen may, in fact, have led to something of a downgrade as I found myself disappointed by the Z4 Tablet’s battery life. The actual battery is no smaller (6,000mAh) than in the Xperia Z2 Tablet, but I’m having to recharge the newer device more often. I have to top up the Z4’s charge every couple of days, whether I use it or not. That’s somewhat unusual for tablets, which can last for multiple days when left idling. The Z4 Tablet still has decent battery life, but it’s not as impressive as, say, Google’s Nexus 9 or Apple’s latest iPads. The keyboard dock doesn’t help matters, either, as it has a tiny power reserve just to keep its Bluetooth radio going and doesn’t give the Z4 Tablet any extra juice.

As a tablet, the Z4 delivers exactly what the Z2 Tablet did last year: outstanding engineering, waterproof durability, minimalist design, and high specs and performance. It is an excellent ambassador for Android, lacking almost nothing in the hardware department. It’s as thin as the iPad Air 2 (a scarcely believable 6.1mm that barely accommodates the headphone jack), and I’d even go so far as to say I prefer its look and feel over Apple’s alternative. I would certainly feel more confident investing in this hardier, waterproof device. But, of course, it’s not just about the hardware. 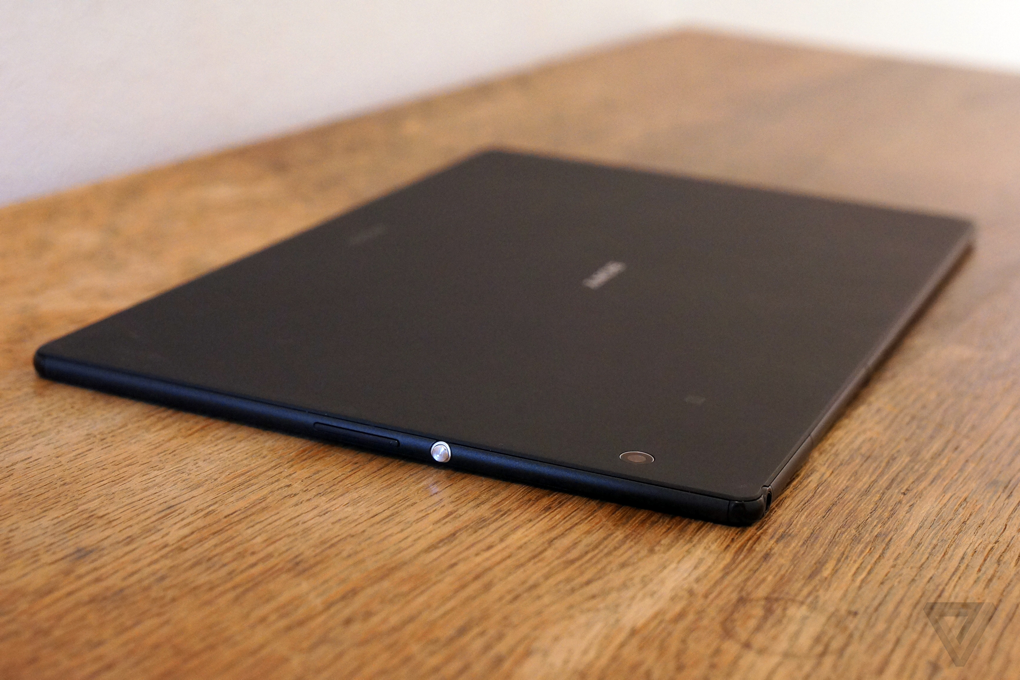 Apple’s app ecosystem remains a considerable advantage in any tablet comparison, though Android apps are gradually improving. The past year has seen the launch of titles like Hearthstone and Vainglory, which occupy an intriguing space between PC and mobile gaming: they’re better suited to a larger screen size yet still maintain a mobile-friendly experience. At the same time, more utilitarian apps like the BBC iPlayer Radio are also coming out with tablet-tailored versions for Android. Small steps in the right direction.

Sony augments the gaming appeal of the Z4 Tablet with the inclusion of PS4 Remote Play. Connect a DualShock controller to the tablet via Bluetooth, boot up your PlayStation 4, and stream the games directly to your Z4 Tablet. I don’t have a PS4 available to test this out with, but it’s a fine feature to have and it would make good use of the tablet’s attractive, high-resolution display and stereo front-facing speakers. Sony also makes a couple of modifications to the Android interface to make its keyboard dock more useful, which offer a good segue into discussing how this device fares in its secondary role as a hybrid laptop.

The artfully titled BKB50 Bluetooth Keyboard is literally just that: a keyboard. There are no additional ports or extra battery for the tablet, which just slots into a receptacle at the top of the dock and connects wirelessly. Once the two are tethered up, you are presented with a small task bar and something akin to a Windows Start menu at the bottom left of the screen. Both are really quite useful, and I found myself customizing the task bar with my most-used apps and using it as my primary mode for switching between tasks. It’s almost worth having the task bar as a default option even without the keyboard — it’s that handy. 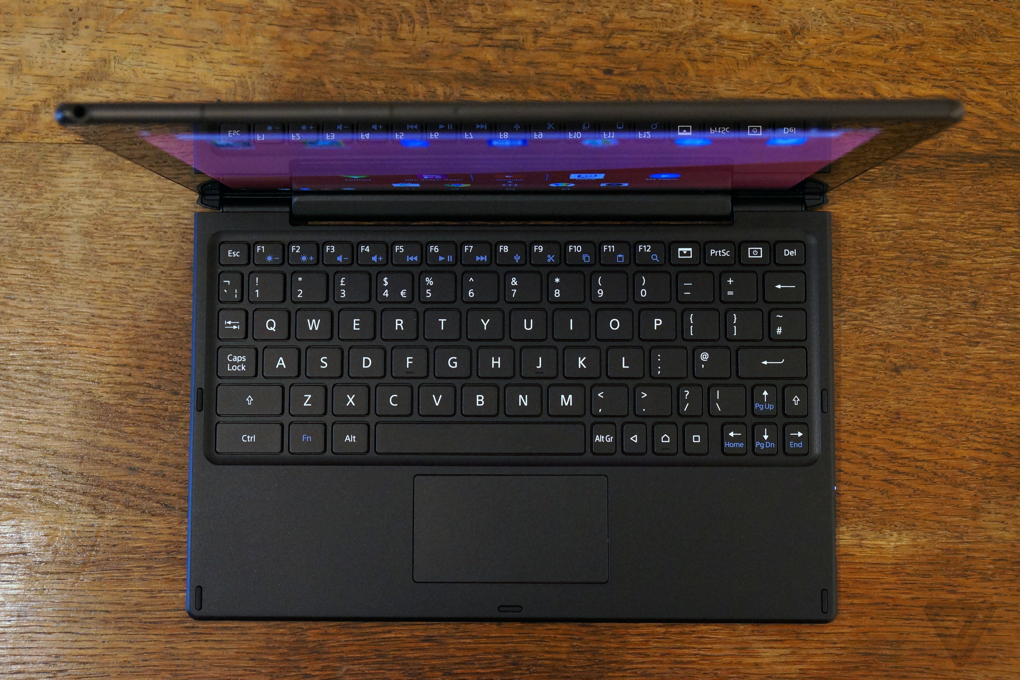 Unfortunately, Sony’s small UI tweaks are where the good news about this keyboard dock ends. The dock itself is an unqualified disaster of bad design. When I have it on my lap, the whole thing shakes back and forth with the force of my typing. The right Shift key and the arrow buttons are so desperately tiny that I keep hitting the Android multitasking button by mistake. I’ve lost count of the number of times I was hunting for the Backspace and landed on the power button. And even though search is a pretty fundamental and common operation when using an Android device, the keyboard shortcut for it here is an absurd two-key combination that spans the entire keyboard. Never have I seen so many buttons squished together into so unhelpful an arrangement.

When did Sony forget how to make good keyboards?

I’d be willing to forgive the arcane keyboard layout if the typing experience was satisfying enough, but it isn’t. The keys are tiny and make an unpleasant clacking sound, which combines with the lack of balance of the keyboard-tablet combo to drive me to either try voice input or give up and switch to my real laptop. Persisting through these misgivings, as a good reviewer must, I kept typing on the BKB50 until I developed a faint ache just above my right wrist. The narrow keyboard width forces the typist’s hands into an unnatural position and such pains are, unfortunately, to be expected. 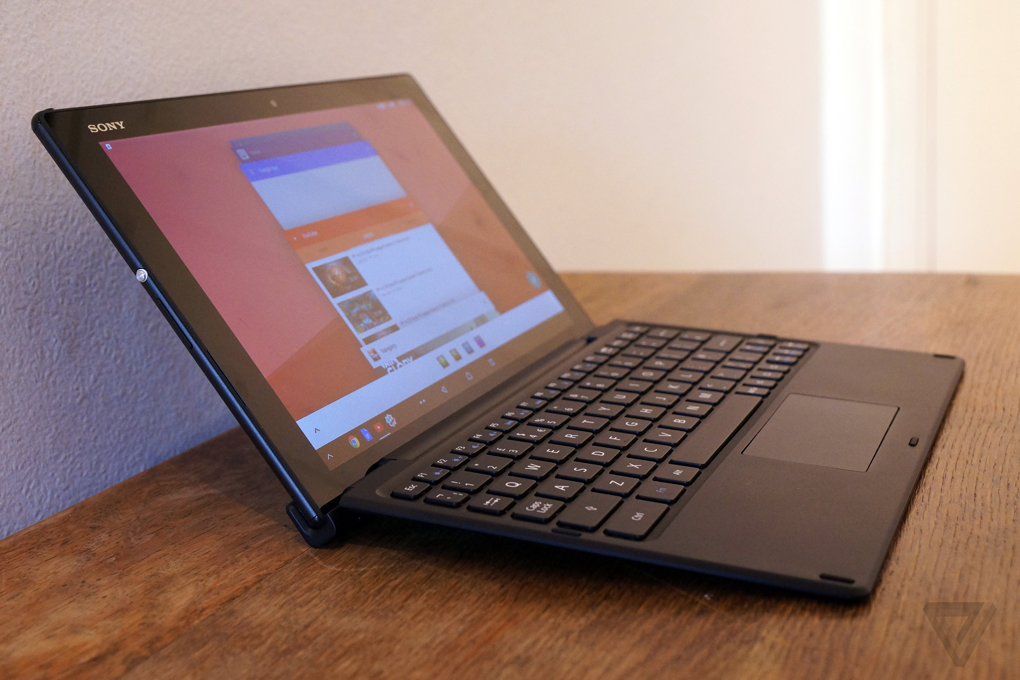 Without a backlight or a Caps Lock indicator, Sony’s keyboard dock limits its usefulness even further. The touchpad might have been a redeeming feature, but it follows the same trajectory into a pit of despair as the rest of the dock. Two-finger scrolling is buggy, regularly freezing up or suddenly jumping in the opposite direction, whether used in Chrome or Google Docs. There’s also a vexing delay of more than a second between me typing anything and being able to use the touchpad — it’s probably Sony’s palm rejection at work, but it makes it so slow to make adjustments with the touchpad that I just don’t bother using it.

The Z4 Tablet sounds great in theory, but the final product disappoints

Yet again, I find myself deeply frustrated by Sony’s failure to live up to its own expectations and produce a cohesive product. The company’s ideas are not bad: there is definitely a class of more conservative mobile PC users that demands a real physical keyboard and Microsoft Office compatibility. Such people can be very adequately served by the Surface Pro 3, but they don’t strictly need a Windows PC. An Android tablet — especially one preloaded with Word, Excel, and PowerPoint as the Z4 is — can fulfill most of their needs, while costing and weighing less. If I was heading off to university this fall, I’d definitely consider getting a super thin device that can be both my YouTube video player and my modernist take on the netbook for taking lecture notes. Sony's premise is sound. Its execution isn’t.

Sony’s Xperia Z4 Tablet could and should have been so much more than just another Android tablet. This is the company that once set the standard for chiclet keyboards with its VAIO laptops and previewed our future with the exceedingly thin VAIO X. Making an Android tablet that can effortlessly morph into an Office-running laptop should be in Sony’s DNA already. Just dust off some of those old blueprints and adapt them to the modern times. 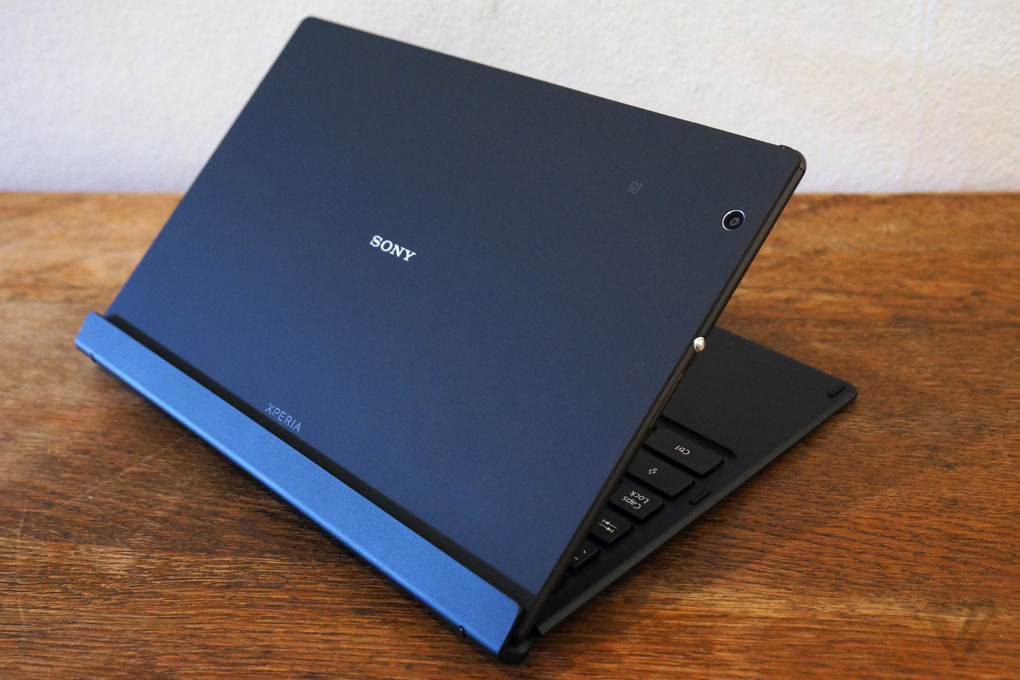 Without a functional and reliable keyboard dock, the Xperia Z4 Tablet shrinks down to the anonymity of being a good device in a sea of good devices. Sure, it makes the Nexus 9 feel fat and heavy by comparison, but Google’s tablet also costs a lot less. More than anything, I have to look back at the Xperia Z2 Tablet from last year — which has the same list of advantages like LTE, thin and waterproof design, and high-resolution display — and ask what Sony has done to improve on is own prior best effort. The display and speakers are still good, the camera is still mediocre, and any improvements on the software front are mostly down to Android’s (still slow) maturation as a tablet platform. Practical differences between the two devices begin and end with the new USB port — and I refuse to get excited about a port that isn’t USB-C.

Not even Apple can get away with reissuing the same iPad every year without shrinking sales. Selling Android tablets is even harder. This is why I found Sony’s idea of fashioning out an Android netbook so refreshing. Our infatuation with netbooks may have subsided many years ago, but our need for quick and easy typing and note taking hasn’t dissipated. There’s a massive opportunity to revive those cramped, awkward little machines of yesteryear with the help of modern technology and turn them into slick, versatile productivity hubs. Apple’s 2015 MacBook is one attempt at creating an evolved version of the netbook, and Sony’s Xperia Z4 Tablet with its BKB50 keyboard offers another. The big difference is that the MacBook is a flawed representation of a future that is yet to come, whereas Sony’s hybrid offering is just flawed.