Cars are really just big gadgets, and that’s especially true when you’re Batman. There have been multiple iterations of the Batmobile, both in film and in the comic books, and they all serve as an extension of the character: it’s a car packed with high-tech tools perfect for snatching bad guys. These interpretations can be very different — there’s the tank-like Tumbler from Christopher Nolan’s films and the sleek, art deco-inspired racer from Tim Burton’s interpretation — but the idea is always the same: what kind of crazy, crime fighting car would you build if you had the unlimited resources of Bruce Wayne?

In the recently released game Batman: Arkham Knight, which introduces Batman’s car to the series, the answer is a combination of all previous Batmobiles. This version is sleek and nimble, able to speed down the streets of Gotham, but it can also transform into a strafing tank for taking down enemy vehicles. According to Ian Ball, design director at Arkham Knight developer Rocksteady Studios, there’s one key characteristic that makes a Batmobile a Batmobile. 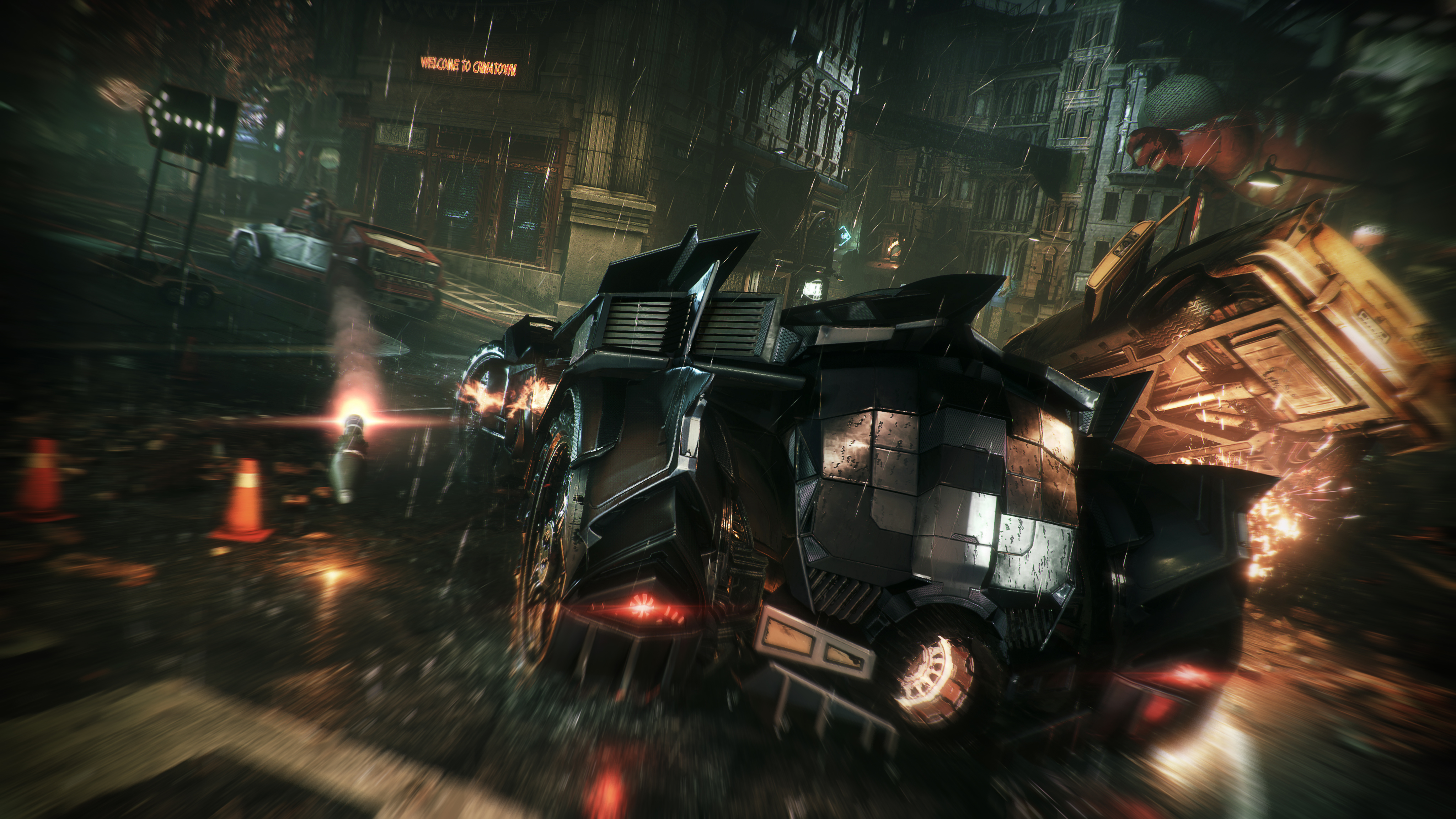 Arkham Knight is the third Batman game developed by the London studio, following Arkham Asylum and Arkham City, and it’s the first where you can drive the iconic car. But the delay isn’t because of a lack of desire; Ball says that the team had wanted to do it in previous games, but was limited by technology (Arkham Knight is the first game in the series designed for the newer Xbox One and PS4 consoles). That may sound like a stretch, but it’s because adding in the Batmobile doesn’t just mean creating a car, it means changing the city to accommodate it. The next-gen version of Gotham is bigger, has wider streets to race down, is littered with shortcuts to make driving fun, and there are destructible environments so that you won’t get stuck on a bad turn. "We didn’t want you to have to reverse if you crash into a corner," says Ball, "we wanted you to tear right through those."

Early on in development the car was much simpler, reminiscent of Burton’s Batmobile and the iconic roadster from the Adam West TV series (which you can also purchase in-game as downloadable content). It was designed to help you get around the city quickly, but that proved to be a problem: navigating Gotham as Batman has always been one of the best parts of the Arkham games, using Batman’s gadgets to quickly zip through the city under the cover of darkness is a lot of fun. The team found that the Batmobile didn’t really add to that. "You were just using it as a transport method," Ball explains, "and Batman can already travel around the city pretty well by himself. So to just get in a car, drive somewhere, and get out didn’t feel that exciting." He describes the initial versions of the driving mechanic as "a bit hollow."

That all changed when they added in the tanks.

Unlike most other Batmobiles, the one in Arkham Knight is also a Transformer. In pursuit mode, it’s a racing machine, able to track down enemies with speed, but in battle mode, it’s something altogether different. The car’s body raises up from the ground, and a canon sprouts from the top, armed with anti-tank rounds and non-lethal bullets "designed to deliver minimum long-term trauma and render combatant immobile." It looks sort of like a souped up, Batman-themed version of Halo’s Warthog, and its gyroscopic wheels mean that it can move laterally, perfect for taking down slow-moving tanks. 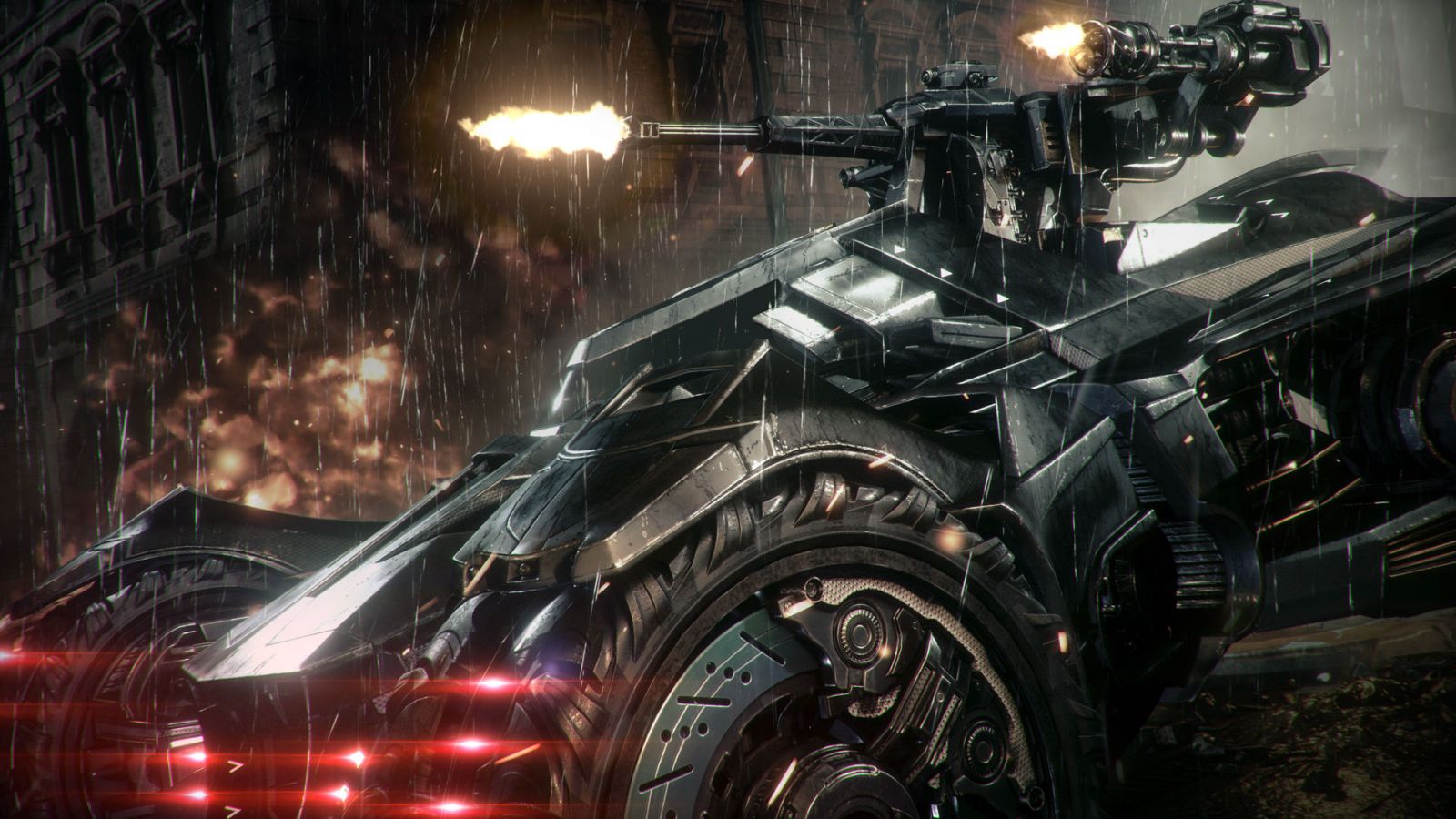 "It’s got a very distinctive grunt."

This multi-functionality is what defined the look of the vehicle. It’s a Batmobile born of function over form. The strafing battle mode meant that the wheels had to be in a particular spot, while the rear seats were implemented because the game has missions where you have to transport prisoners from one place to another. And while many versions of the Batmobile feature a cockpit well toward the rear of the vehicle, the team at Rocksteady went a different way; since you can eject from the car, it made more sense for the driver to be at the front so you could fly forward and clear of the vehicle. These elements defined the core of the car, and from there it was about refinement. "We just added in the little details to make it more Batmobile-like," Ball says. "The fins, the bat symbol on the front grill, and other details like that finished it off in terms of the look."

Particular attention was paid to the vehicle’s rear: after all, it’s the place you’ll be looking at the most when you’re playing. Arkham Knight’s Batmobile sports a massive thruster that’s visible whether you’re in pursuit or battle mode. It’s an anchor that helps tie the look together, and makes it feel like you’re driving the Batmobile, not just some boring old supercar. It was inspired by the similar afterburner on the Batmobile from the Adam West series.

In fact, much of the design was inspired by past versions of the car. While Nolan’s Tumbler helped introduce an element of realism to the Batmobile, pulling from military vehicles and other real-world cars, Rocksteady instead looked primarily at in-universe stuff as a source of ideas. The flared wheels from Tim Burton’s film, the thruster from the campy TV show, and even the rugged shape of the Tumbler all came together to create this car. The design is like a history lesson in Batman transportation. The only time the team really looked at real-world cars was when it came to sound: they traveled to Los Angeles in order to record some high-end V8 engines, to really give the Batmobile that added punch. "It’s got a very distinctive grunt," says Ball.

He adds that his favorite version of the car is the one from the Burton movies, and it’s not just because of how it looked; it’s the way it took what he’d seen in the comics and brought it to life. "It was the first time really you’d seen the beauty of the Batmobile on the cinema screen," he explains. For many players, Arkham Knight’s Batmobile serves a similar role: it’ll be the first, and perhaps only, time they’ll be able to drive the iconic vehicle.

"There have been a few games with Batmobiles in them," Ball says, "but they were quite a while ago. Probably before a lot of people were born."