Samsung's flagship phablet gets a refined design and nicer materials

Samsung is officially taking the wraps off of the Galaxy Note 5 today, the latest in its flagship line of Note phablets. The Note 5 is best described as a blend of the Galaxy S6 introduced earlier this year and the Note 4 from last year. It's a familiar shape and size, and it's likely to be the best Note Samsung's ever made.

That's important for Samsung, because while it essentially defined the large smartphone (or phablet) market, it's seen its market share and profits get chewed away from both Apple and its larger iPhones as well as lower-end Android makers. The Galaxy S6 might be the everyman's smartphone from Samsung, but the Note line has always represented the pinnacle of Samsung's smartphone lineup, and it carries a lot of weight on its shoulders.

Read next: Our Galaxy Note 5 review

The Note 5 is still at the top of the heap of Samsung's lineup, but perhaps surprisingly, Samsung has recycled a lot of what we saw in the Galaxy S6. That's not necessarily a bad thing: the S6 brought along a speedy processor, great display, and outstanding camera, and all of those things are present in the Note 5. The Note 5 also gains the S6's design and materials, including a glass front and rear and a solid metal frame. But fans of the older Note phones will quickly notice that this step up in design and materials didn't come without cost: the removable battery and microSD card support are gone, as is any sort of waterproofing. 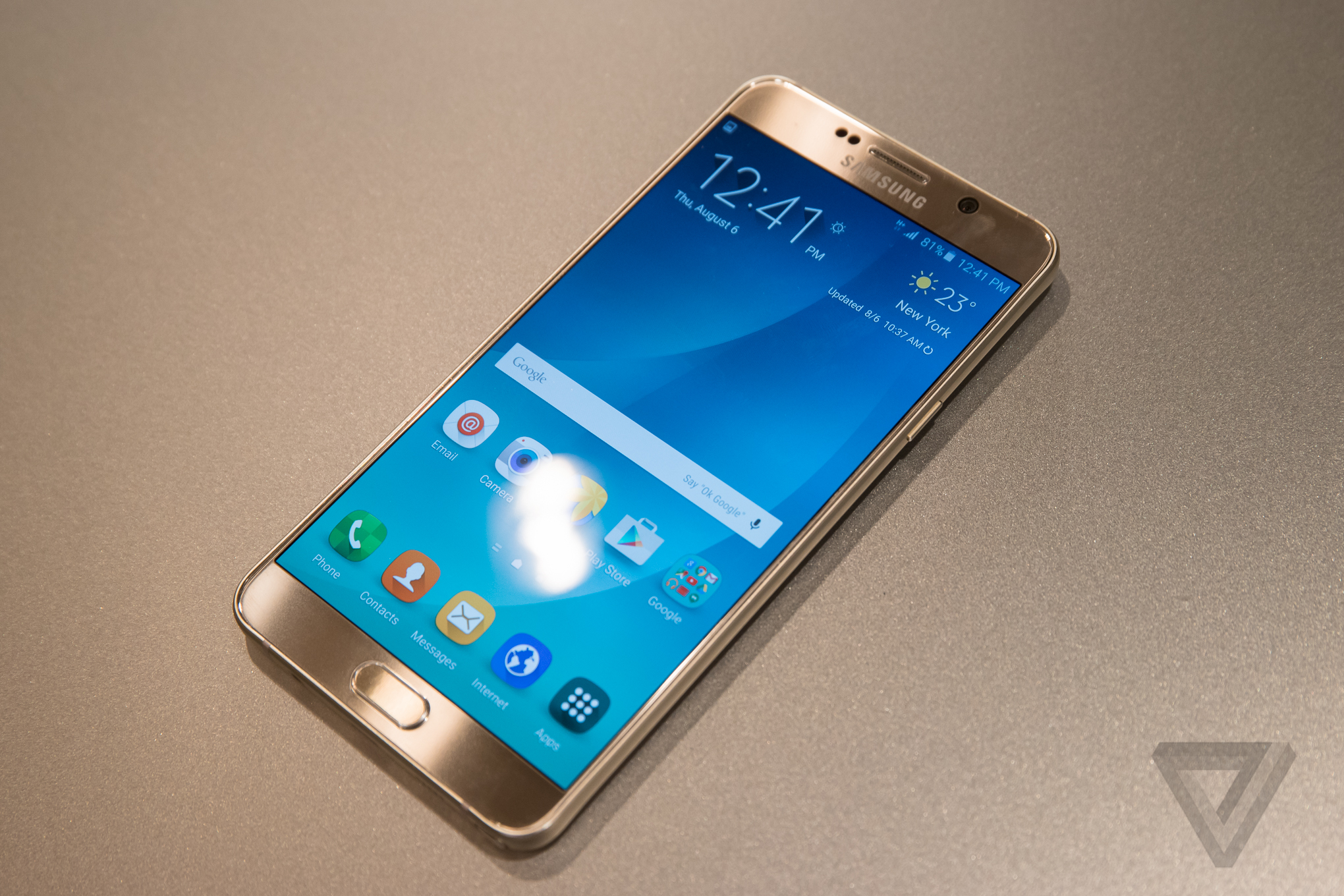 In terms of specific specs, the Note 5 has the same octacore Samsung Exynos processor as the S6, though this time it's paired with 4GB of RAM. You can get a Note 5 with either 32 or 64GB of storage. The 3,000mAh battery is actually smaller than the one in last year's Note 4, but the Note 5 includes support for both wireless charging and quick charging this time around.

The camera, processor, and design all borrow from the S6

The Note 5's camera is the same 16-megapixel unit with OIS as found on the S6, and its 5.7-inch Super AMOLED display has the same quad HD resolution. The screen is the same size as the Note 3 and Note 4 — apparently Samsung has settled on 5.7 inches as being the right size for its Note phones — but the overall dimensions of the phone are smaller in every way compared to last year's phone. It's ever so slightly shorter, narrower, and thinner than the Note 4, and that's evident when you pick it up and try to navigate it with one hand. The ergonomics are also aided by the curved back, which makes it easier to rest the phone in your palm. The Note 5 is still a large phone, without a doubt, but it feels less like one than ever before.

The glass back does make the device slippery, however, and it's extremely prone to collecting fingerprints, regardless if it's the white or black color. Otherwise, the Note 5's design and build quality are just as high-caliber as the S6. 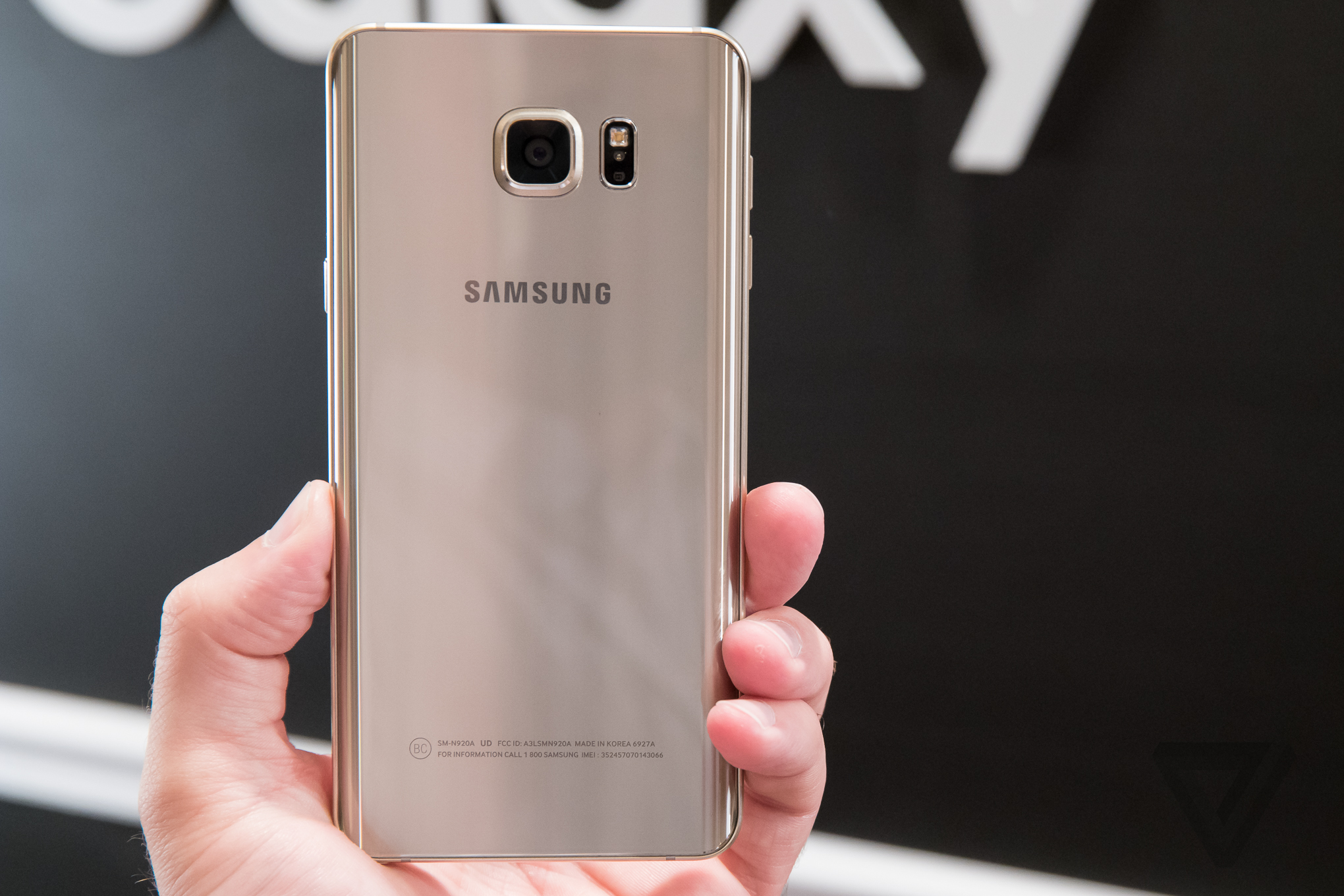 Of course, it wouldn't be a Note if it didn't have Samsung's S Pen writing utensil, and sure enough, there's one located in a slot on the lower right of the phone. The new S Pen is longer and nicer than prior ones, and Samsung says it has improved the pressure sensitivity and writing performance over older models. There are a handful of new features too, such as the ability to pull the pen out of its cave and instantly start writing on the display without turning it on for quick notes.

The rest of the Note's software should be familiar to anyone who's used a recent Samsung: it's Android 5.1 Lollipop with Samsung's TouchWiz interface and customizations on top of it. A couple of new features include the ability to live stream video from the camera app to YouTube and an improved app for connecting and managing the phone with a PC.

Part of Samsung's move this year is to release the Note 5 ahead of Apple's fall iPhone launch, and you can actually preorder the phone from all four major US carriers starting today. It will be available in stores starting on August 21st, quite a bit earlier in the year than prior Note devices. Samsung says that each carrier will set pricing for the phone, but it will likely be priced around the same as prior Note devices, so you can expect to pay more for it than you would a Galaxy S6.

Correction: This article originally referred to a gold Note 5. The device will be available in black and white.

Update August 14th, 8:34AM ET: Samsung has added 128GB options to its online store. This post has been updated to reflect that.

Update August 14th, 9:27AM ET: A Samsung representative has informed The Verge that 128GB versions of the Galaxy Note 5 and the Galaxy S6 Edge+ are not being offered. This post has been updated to reflect that.