No matter how dry and symbolic text might be, the way you write it matters. I’ve spent a large part of my life messing around with different kinds of typewriters, paper, and (as an annoying ancient language-obsessed kid) clay tablets. If my photographer friends can experiment with film and DSLRs and light field cameras, why shouldn’t I try to find an incredibly specific tool that gives me the writing experience I want? The MacBook Air fills that niche for tech reporting; I’ve got a finely tuned ecosystem for turning words and photos into finished posts. But in my spare time, I want something that’s solid, hyper-portable, and single-purpose.

Netbooks have been my go-to device for a while. But last week, I won an auction for the Psion Series 5 — a 1997 personal digital assistant that looks more like a little laptop. Through the 1980s and 1990s, Psion was one of the trailblazers in PDAs and “palmtop” computers. The Series 5’s EPOC operating system turned into Symbian, a major mobile platform that was at one point virtually synonymous with Nokia’s phones. People still praise Psion PDAs today, but I’d never owned or used one. After opening a box in remarkably near-mint condition, I decided to write a draft review of the Psion, using the Psion. I almost succeeded. 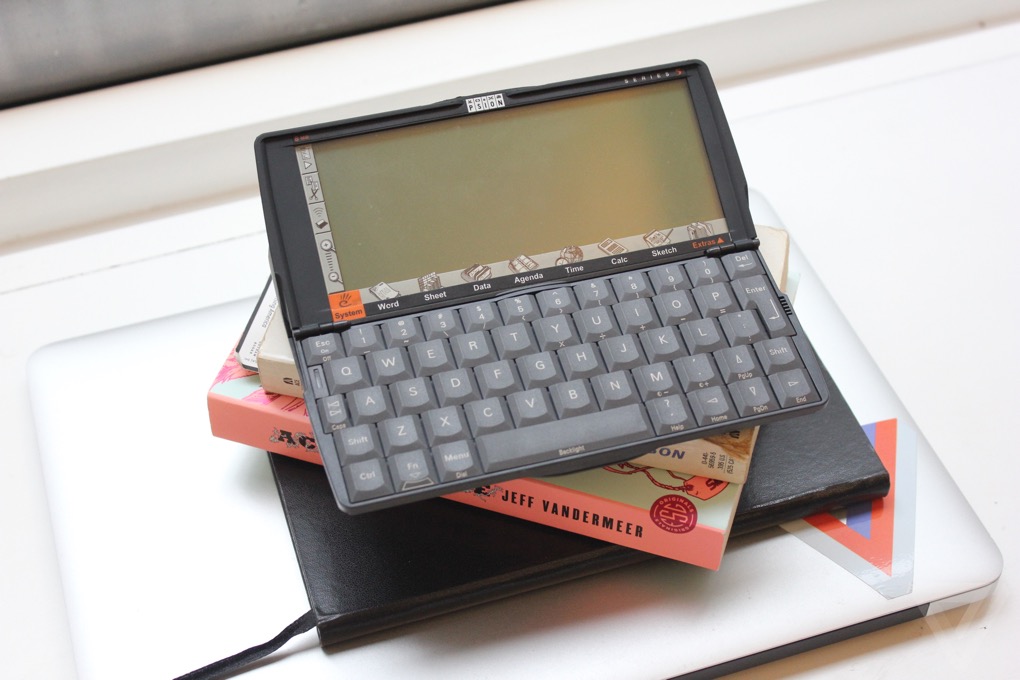 The Psion Series 5 is bulky by 2015 mobile standards; it’s more like a large Nintendo DS than a PalmPilot. But if you think of it as a laptop substitute, it's the most convenient thing I've ever carried. The screen doesn’t just lift open like a clamshell laptop, it slides up and rotates into the body, so it never feels wobbly or fragile. The base holds a tiny stylus that pops out with a satisfying click, letting you use a resistive touch interface as well as a keyboard. There’s also, oddly, a little slot with physical recording and playback buttons, so you can hold a black rubber brick to your face and take voice notes. It runs primarily on two AA batteries, which is a godsend for such an old device — I don’t have to deal with a shot, 18-year-old proprietary battery. As a simple device with a monochrome screen, it’s supposed to give you 25-35 hours of use for each set of batteries. 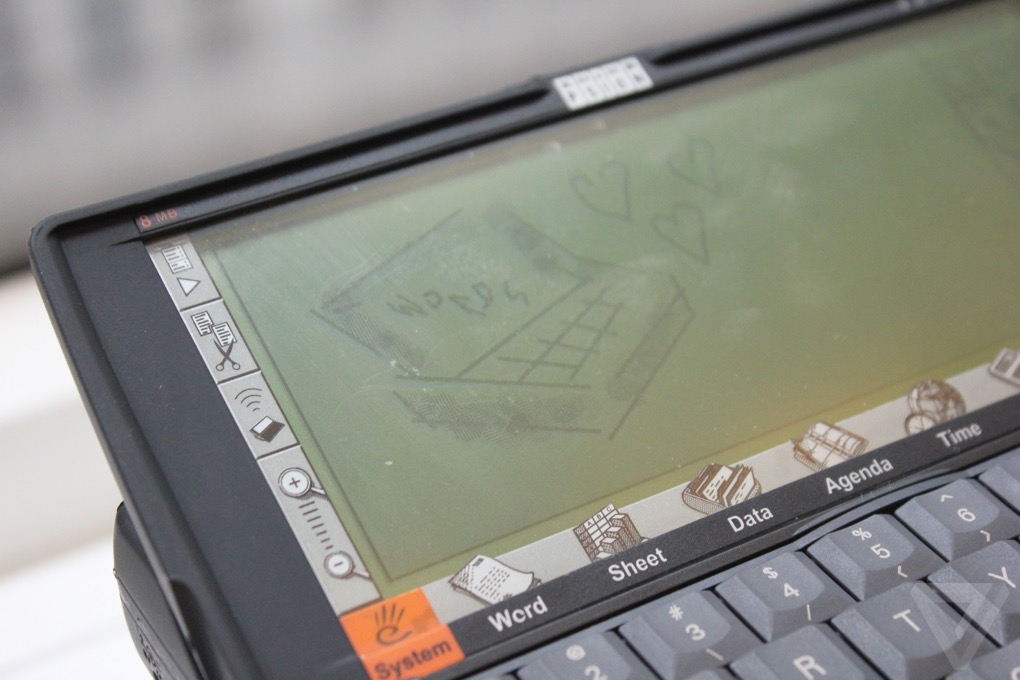 Do you see words on this?

That monochrome screen, however, is the Psion Series 5’s big weakness — it’s really, really bad. Bad compared to a computer. Bad compared to a graphing calculator. Bad compared to the light-up alarm clock I had when I was 10. It's both low-contrast and glossy, nearly unreadable under anything but artificial ambient light, unless you turn on a green backlight that I'm guessing eats battery fairly quickly. I’d seen this in old reviews of the Series 5, but it's still impressively awful.

Fortunately, just about all the other hardware feels wonderful. It’s a plain but satisfying design, and if the screen looks terrible, it’s at least very responsive to touch. The keys are larger and travel farther than some modern counterparts, although they’re also very stiff — here’s one of my earlier sections in its original form:

"The most immeditely notable thing abou the Pson Series 5 is tht its screeen is really, really bad. Bad compared to a computer, Bad compared to a graphing calculator, Bad cmpared to the light-up alarm clock I had when I was 10."

Part of the issue is that it takes time to get used to any small keyboard. I have tiny enough fingers that I can type fairly well on the condensed design, but it relegates some important punctuation (like my beloved en-dashes) to awkward corners or secondary functions. Whatever its shortcomings, it's a fun little writing machine, smaller and more convenient than any laptop or tablet on the market. 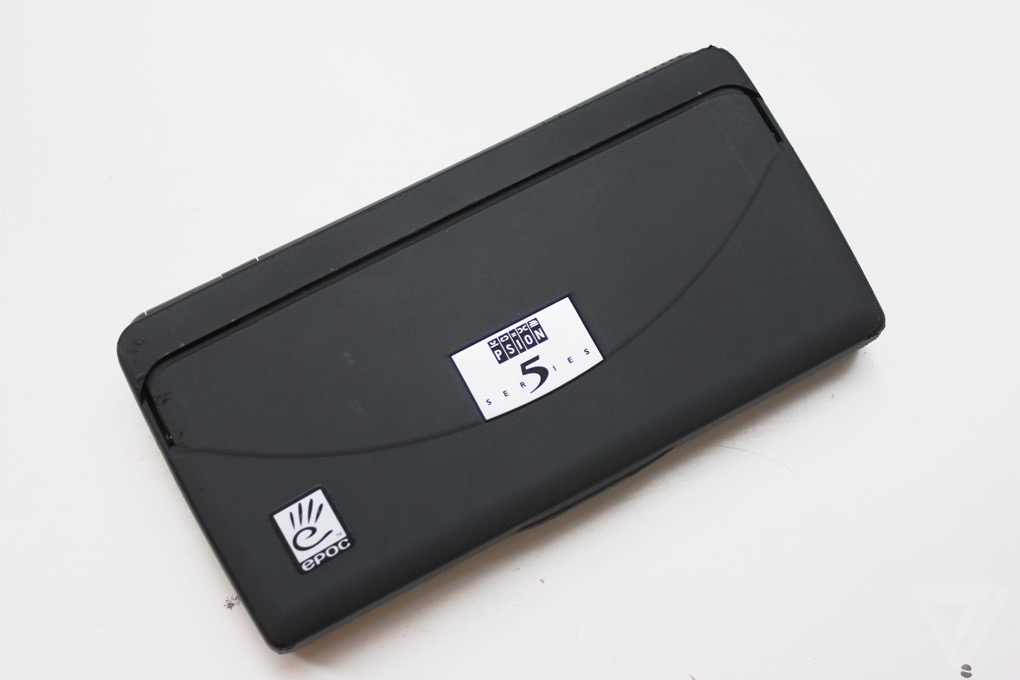 Getting what you write off the Psion is another story. The Psion series used infrared to sync with early mobile phones and a serial cable to connect to Windows 95/98/XP’s PsiWin software. I had to do something its creators never planned for: pull files from a PDA running the proto-Symbian EPOC to a PC running Windows 8.1. Fortunately, the Psion is remembered fondly enough that I'm not the only person who wants to do that. You haven't really experienced what the internet has to offer until you've pieced together several different tutorials for getting 18-year-old software up and running. 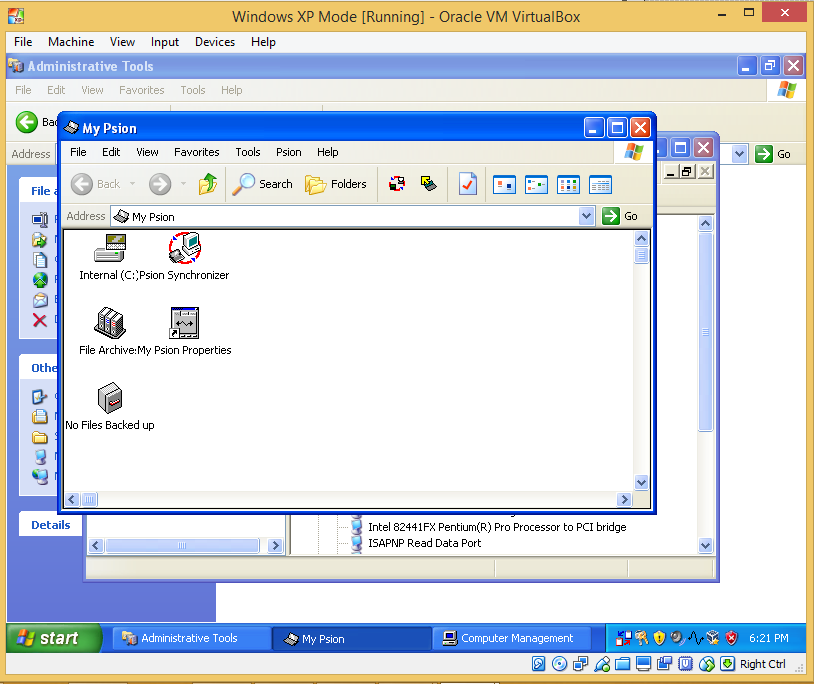 Syncing a Psion is like solving the Hellraiser puzzle box

Even with the guides, it took me about an hour and a half (plus a serial-to-USB adapter that cost half as much as what I paid for the Psion itself) to transfer a file. Something that merited a scant two pages in the Psion's giant manual required extracting the virtual hard drive from Windows 7's defunct "XP Mode," loading it into the VirtualBox emulator, loading drivers for the cables, finding a copy of PsiWin on the internet, synchronizing the baud and port settings across PC and Psion, realizing I'd accidentally unplugged the serial cable, restarting both VirtualBox and the Psion a couple of times, and finally setting up a shared folder to transfer obsolete Word-compatible documents containing my writing.

Along the way, I remembered why I rarely consulted the gigantic instruction manuals that came with my old software: because they're completely useless. The Psion came with a spiral-bound book substantially larger than the actual computer, and it’s great if you need help understanding that you can snooze an alarm by pressing the Snooze button. It’s somewhat less helpful if anything at all goes wrong. Psion was so confident in its PC sync software that it didn't bother to explain half the settings. Interfaces haven't changed that much in the ensuing years — everything on the Psion was almost immediately recognizable — so maybe today's products don't explain menus and alarms because we’re more familiar with basic design language. Or because a business-focused device needed obsessive documentation. Or because today’s developers are just more willing to make us hunt for things.

To a modern, casual user, there’s not much to do besides write on the Psion. It’s apparently possible to create and run custom programs on it, but in general, all its uses are marked right on the front: agenda, spreadsheet, sketchpad, world clock. There is also a version of Minesweeper called Bombs. I played it on the subway. It’s okay. 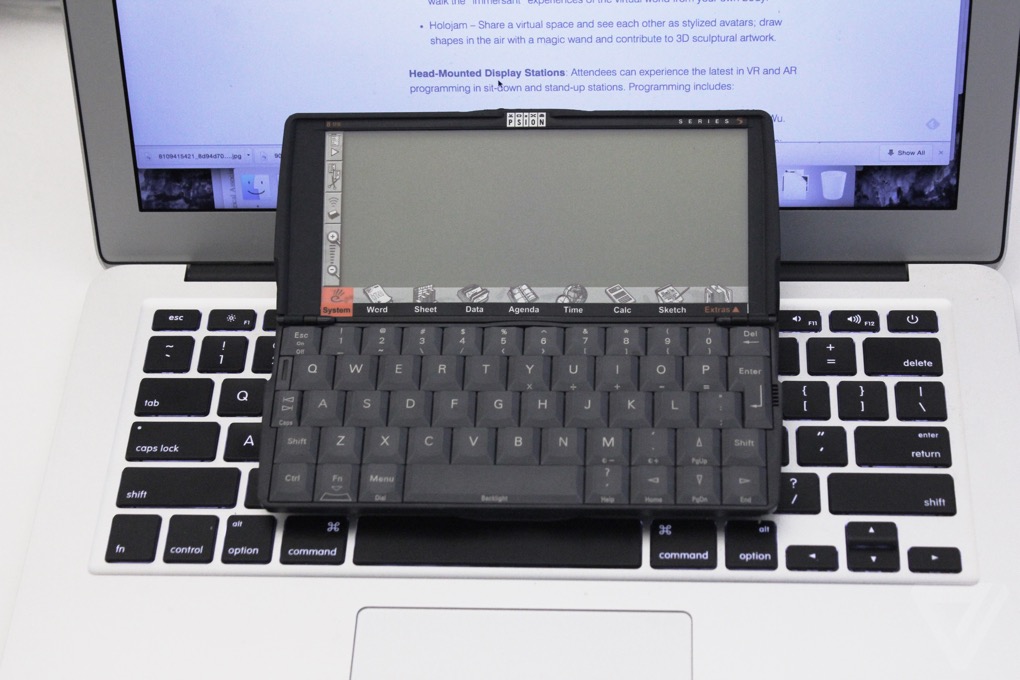 I wrote a very early version of this review on the Psion, but I didn’t even try to edit it, since I couldn’t see more than a few lines at a time — and that was when I could see anything at all. The way I write for The Verge, in particular, involves a constant process of editing and rewriting, and the stream-of-consciousness format that the Psion encourages is uniquely bad for that. For all its shortcomings, though, the Psion is what I wish my netbooks could be: a long-lasting and distraction-free writing device that can fit in a clutch purse instead of a messenger bag. It’s like the Hemingwrite, but with a more convenient size and a name that is also a Dungeons & Dragons class.

At the time the Psion came out, things like its small screen and limited features were a matter of necessity. Now, they provide a very specific experience that’s based not on being the most full-featured thing on the market, but the least. There are writers who use typewriters, or distraction-free word processors, or internet-free computers to get the same effect. And the Psion has the added benefit of letting you write almost anywhere.

The Psion's Achilles heel is, according to complaints online, the cable connecting its dim little screen. Every move of the hinges supposedly stresses it a little, and if I use mine long enough, I’ll eventually stop seeing the display altogether. After all, with few exceptions, there's no such thing as an antique computer — just an old one. But the Psion was such a good idea that I wish someone would pick it up for a modern device (or that this already exists, and I just haven’t heard about it). If there’s a market for custom train simulator controllers, there has to be one for this.