Solitaire gets a much-needed makeover in this new mobile game

Solitaire gets a much-needed makeover in this new mobile game

The ubiquitous card game has been redesigned for your iPhone

Zach Gage hates Solitaire. More specifically, he’s not a fan of the way the game has changed as it shifted from a physical card game to perhaps the most played video game of all time, thanks to the version that comes bundled with every copy Windows. "I love the building blocks of Solitaire," he explains, "but I do hate modern Solitaire. And the more I investigated it, the more I hated it." So he decided to not only try to fix what he believes are problems with the modern game, but also create a new version of Solitaire explicitly designed for your phone.

Out today on iOS, it’s called Sage Solitaire, and I can’t stop playing.

The core of Sage is similar to most other variations of Solitaire: your main goal is to get rid of cards and score points. Sage presents you with a three-by-three grid of card piles, which grow larger as you move from bottom right to top left. Like in Klondike Solitaire — the kind you’ve wasted too many hours playing on your work PC — the top card on each pile is turned over. In order to get rid of cards, you have to make hands. It’s sort of like poker; hands include everything from pairs to a straight flush, and the better the hand, the more points you earn. You also have to make sure your hands include cards from at least two rows, which adds an extra layer of strategy: you want to get the highest score, but you also want to ensure you don’t exhaust your supply of usable cards.

It may sound complicated, but the best part about Sage is that it moves so quickly; a round of the main mode, which uses a single deck of cards, lasts just a few minutes. It may take a bit longer at first, especially if you’re not familiar with poker hands — but as soon as you understand the rules, playing is a breeze. I haven’t found myself this absorbed by a mobile puzzle game since Threes. Every element of the game feels tuned toward fast, touchscreen play — even the cards themselves have been redesigned to make the card type more prevalent, while suits have been given new colors to make it easier to quickly identify them.

"Now we have this mutant version of Solitaire."

According to Gage, Solitaire is a natural fit for a smartphone because it’s "the original mobile game," as he describes it. "When it first came out, it was the thing that we would do in a similar context to how we use our phones now," he adds. "Solitaire has such roots in mobile, but it’s totally inappropriate for mobile now. Solitaire is a game that’s meant to take over a table and have a million piles, and our current phones are big, but they’re not that big." But making Solitaire work better on mobile wasn’t Gage’s only impetus to make Sage — in fact, he says, early versions worked just fine as a traditional card game. What he really wanted to do was counteract what he saw as a growing problem with digital Solitaire games.

For many of us who learned Klondike, the game works in a very peculiar way. You have seven piles of cards, and a deck where you select cards as you attempt to match the cards of all four suits together, in order. Traditionally, you flip over three cards from the deck to work with, and you can’t use the lower cards until you’ve used the one on top. But the computer version of the game changed this, so that you only flipped over a single card at a time by default — and that seemingly small rule change is a big deal for Gage.

"Going through one card at a time makes Solitaire an almost instantly solvable game," he explains. And it’s a problem he believes has only gotten worse — a number of mobile versions of Solitaire will even shuffle the deck in a way that ensures that you can win no matter what. "People have built these house rules that simplify the game, and those house rules have slowly become codified into what Solitaire is. And now we have this mutant version of Solitaire."

With Sage, his goal was to create a version of the game that combined the strategy of the card versions of the game, with the randomness people seemed to love in the digital versions. "One of the core things that’s great about modern Solitaire, is that you flip a card over and you don’t know what that card is going to be," he explains. "And you have some hopes and dreams about what that card will be, and then the card reveals itself and affects your strategy. With Sage I’m trying to play up all of that tactical stuff, but still maintain a heavy dose of luck and hope."

"You have some hopes and dreams about what that card will be." 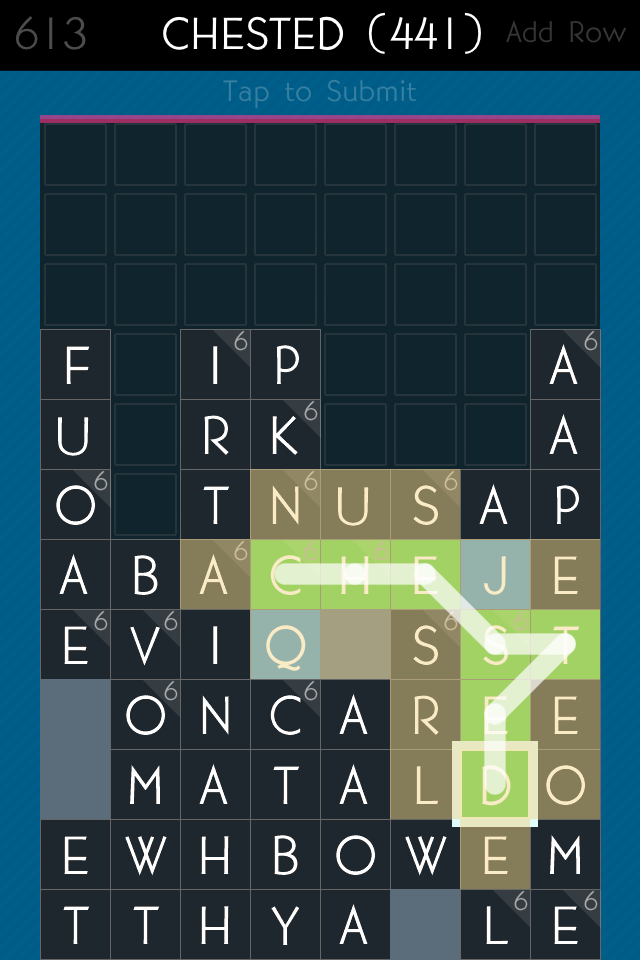 Tackling a genre that he dislikes isn’t new territory for Gage. In 2012 he released Spelltower (right), despite the fact that he had no interest in word games. "With Spelltower I wanted to make a word game that people who hated word games could play, and that people who loved word games would get a new experience," he explains. "I’m trying to do something very similar with Sage."

The game is free to download; you don’t have to pay to play the single deck mode, but you will have to put up with interstitial ads. For $2.99 you can get rid of the ads, and play both a two-deck mode — which results in longer games — and an easier mode called "Fifteens," which increases the number of possible hands. The premium version also has additional features like customizable card backs and the ability to check out in-depth stats about how you play. Gage says that the pricing model was inspired in part by Threes. While the paid version of that game was successful, several free clones managed to reach an even wider audience, resulting in an official ad-supported version that launched earlier this year. "Watching what happened to Threes was a really brutal and eye-opening experience," Gage says.

Solitaire is one of the most ubiquitous and popular games in the world, and so in some ways it’s a natural fit for a developer looking to reach a big audience. But it’s also a game that’s often derided as little more than a time-waster; people don’t put it on the same pedestal as games like Tetris. With Sage, Gage is hoping to show players that there’s a lot more to the game than they think.

"It’s one of the biggest video games ever, but it’s a game that we don’t like to talk about much," he says. "It’s a giant game that doesn’t get a lot of respect."