The third generation of the low-cost all-star arrives

When Motorola introduced its latest series of smartphones last week, all eyes were on the Moto X. For several years, the Moto X has been Motorola's top-of-the-line phone — the one we all look to when divining Motorola's fortunes. But Motorola made it clear that its fortune is now tied up in something far more unassuming: the Moto G, which in just over a year and a half has become "Motorola's most successful smartphone ever."

Still less than two years after its initial launch, the Moto G is getting its third overhaul. Motorola already has a working formula, and this year, it's polishing off the rough spots. Specifically, Motorola is addressing the G’s design, camera quality, and data speeds. It's once again trying to wow people with how much they can get at a surprisingly cheap price — $179.99 — and once again, the Moto G does its job. 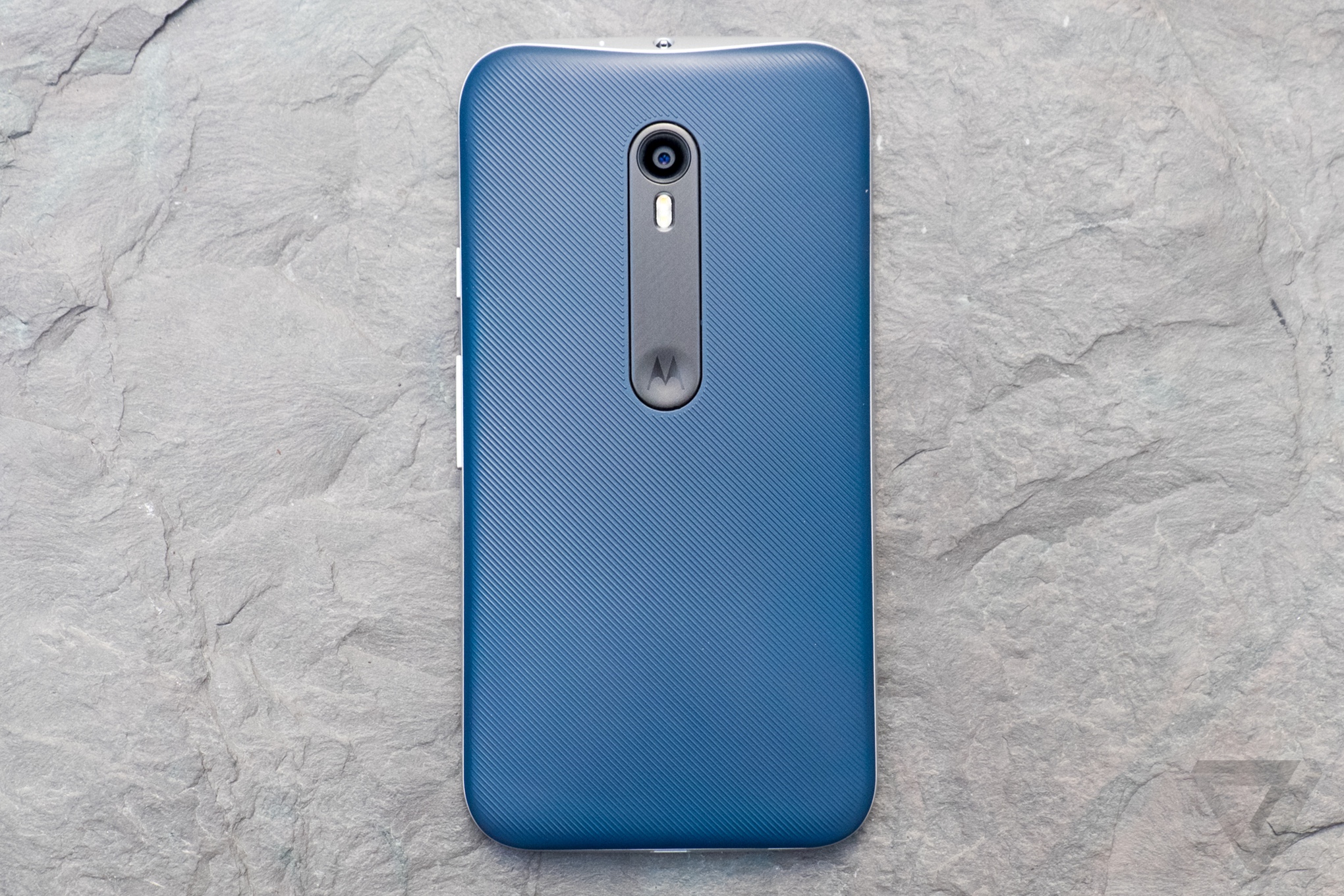 The Moto G has always looked like the chubbier little sibling of the Moto X, but Motorola’s been a bit kinder to the 2015 model. In fact, the new Moto G looks almost identical to the Moto X Style — it's basically a plastic version of Motorola's most expensive phone. Plastic is something of a dirty word in cellphone design, but it only looks cheap here where it's pretending to be metal, on a small silver strip that's running around the phone's white faceplate. The black model does a much better job. 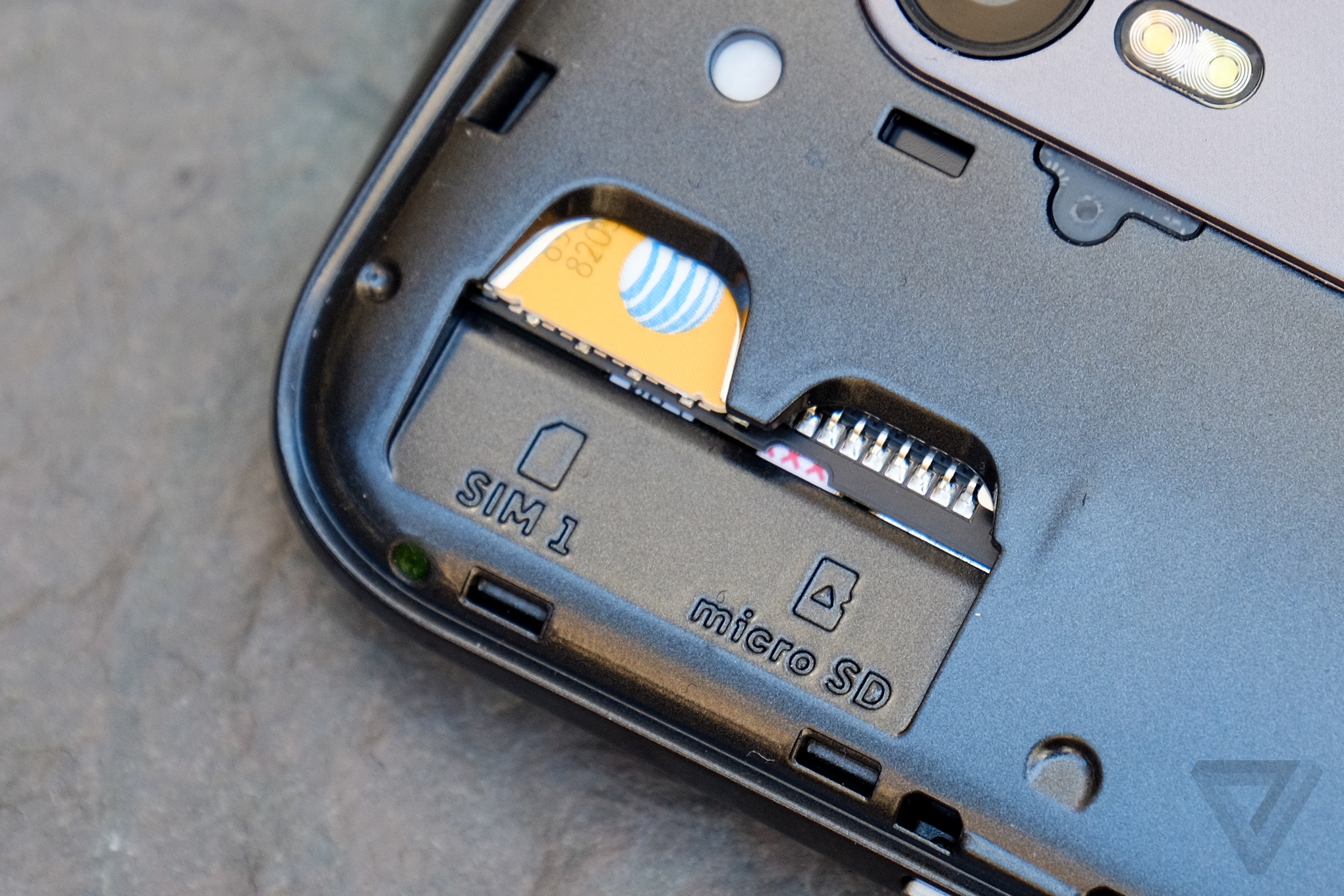 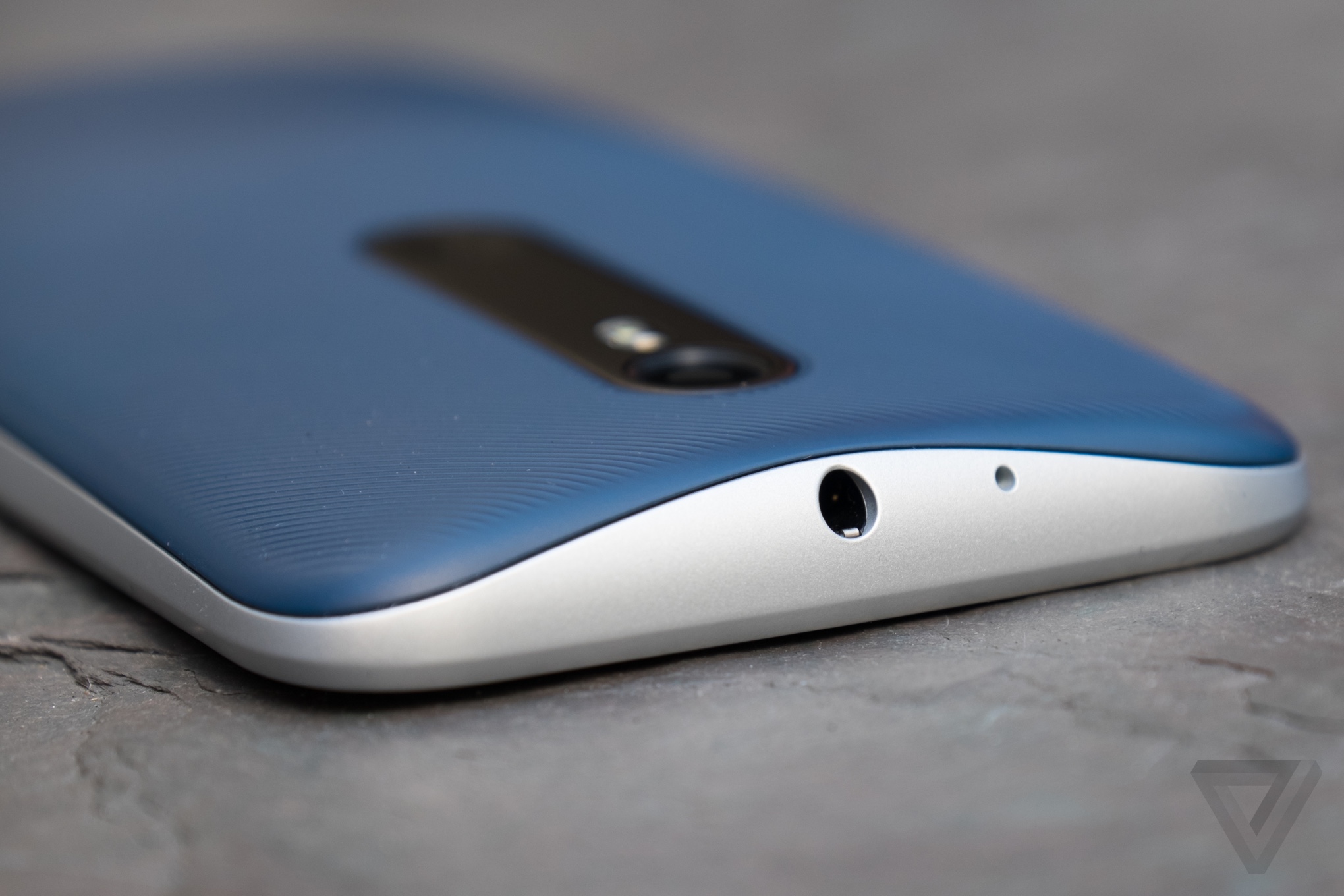 The Moto G's white face isn’t its best look, but the phone looks good from basically every other angle. In part, that's thanks to the fact that Motorola now lets buyers customize their Moto G. In addition to choosing between a black or white face, you can also choose between one of 10 different colors for the phone's back plate and an accent strip that drops down from its camera. There are a lot of fun and colorful options; the navy-blue-and-white model Motorola gave me is on the tamer side, but the contrasting colors are still enough to make it more interesting than the average phone.

The Moto G's back also has slim ridges running across it that give the phone a simple but stylish texture. But a word of warning: you'll eventually put the Moto G down on a dirty surface, leading to crumbs getting caught between its ridges. You'll then pick the phone up to show to someone, and they'll think you're a disgusting slob. On the other hand, the upside of the ridges is that you can run your fingernail over them to make a very satisfying zzzzzzzzzzzzip sound. I do it all the time, and I don't think anyone's gotten annoyed by it yet. At least, no one's said anything to me.

The Moto G is stylish, but it could be easier to hold

You can also swap out the Moto G's backs after the fact if you want to change up its look. They come on and off easily, but you need to be mindful about putting it on properly: the phone is water resistant, but only if the back is on tight. (When you first get the phone, it’ll give you a lesson on how to do this — after that, it’s up to you to remember.) If the back is on properly, the new Moto G should withstand splashes and drops in water up to 3 feet deep for 30 minutes. It’d be great if more phones had at least this level of water protection. The Moto G’s touchscreen doesn't actually work while wet, but you probably don't want to use it underwater any more than necessary.

The downside to the Moto G's new design is that it's also a bit bigger than last year's model, even though it keeps the same 5-inch screen size. It isn't a huge difference, but the G is already reaching a size that's a bit difficult for people without large hands — like myself — to use one-handed. Most of the time, I managed just fine, but I struggled to reach the top and bottom of the Twitter app as I was lying half off of my bed this past weekend. You might call that an unexpected use case, but that's basically my Saturday morning. 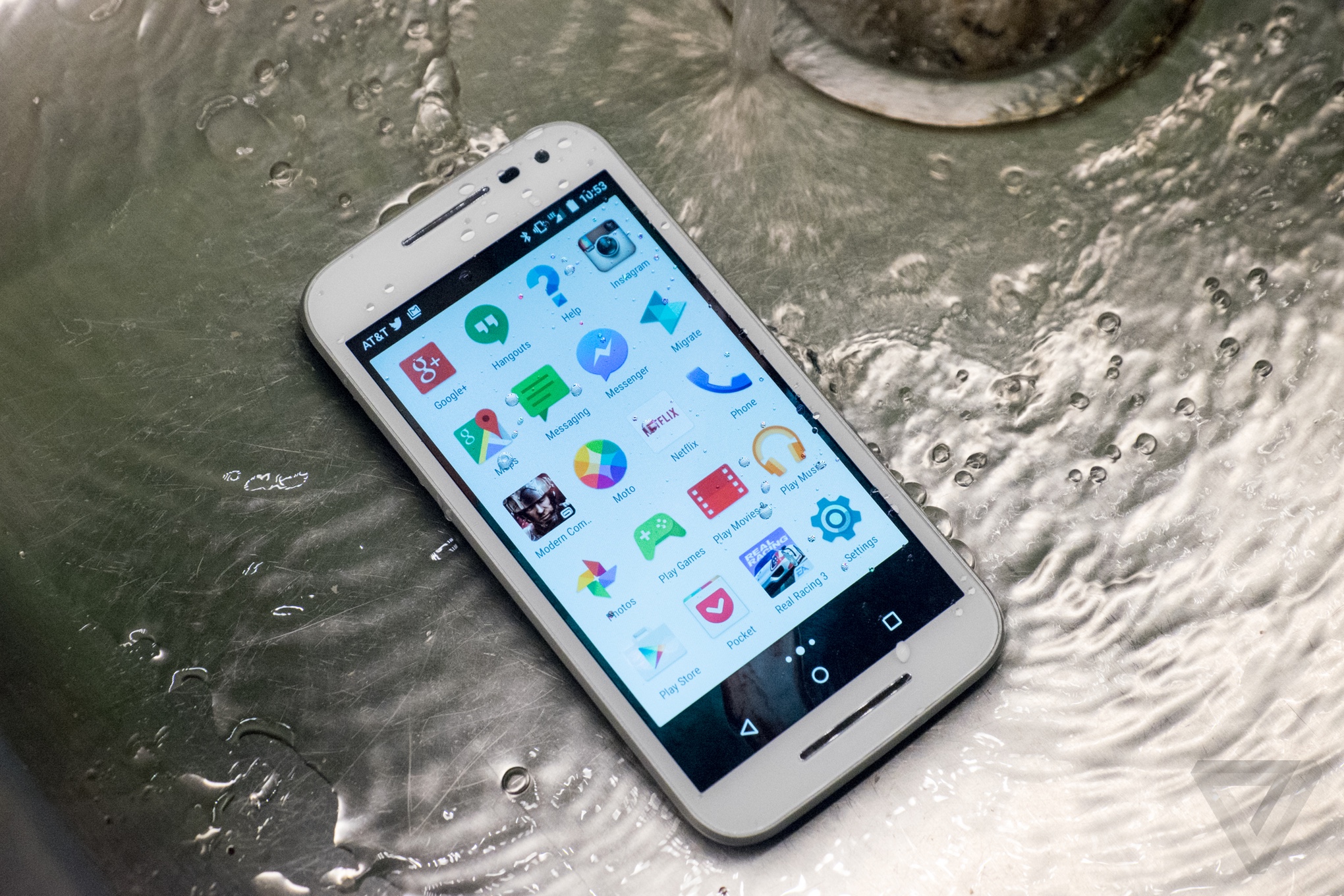 The Moto G's display is another of its weak spots. It has a 720p resolution, which is just pushing what's acceptable when stretched across 5 inches, but that’s not its real issue. The real problem is that the colors often feel a bit muted, and the display itself is ever so slightly set back from the glass. The combined effect is that I often feel like I'm staring through a slight haze while looking down at the phone. There's no illusion that you're really touching its pixels, and there's this persistent feeling while watching a video that it would be more vibrant while playing elsewhere. The display is entirely useable — reading, gaming, and using apps like Twitter and Facebook are just fine — but it's not the finest for photos or videos. Direct lighting can also create some issues with glare, although sunlight never posed a major problem. 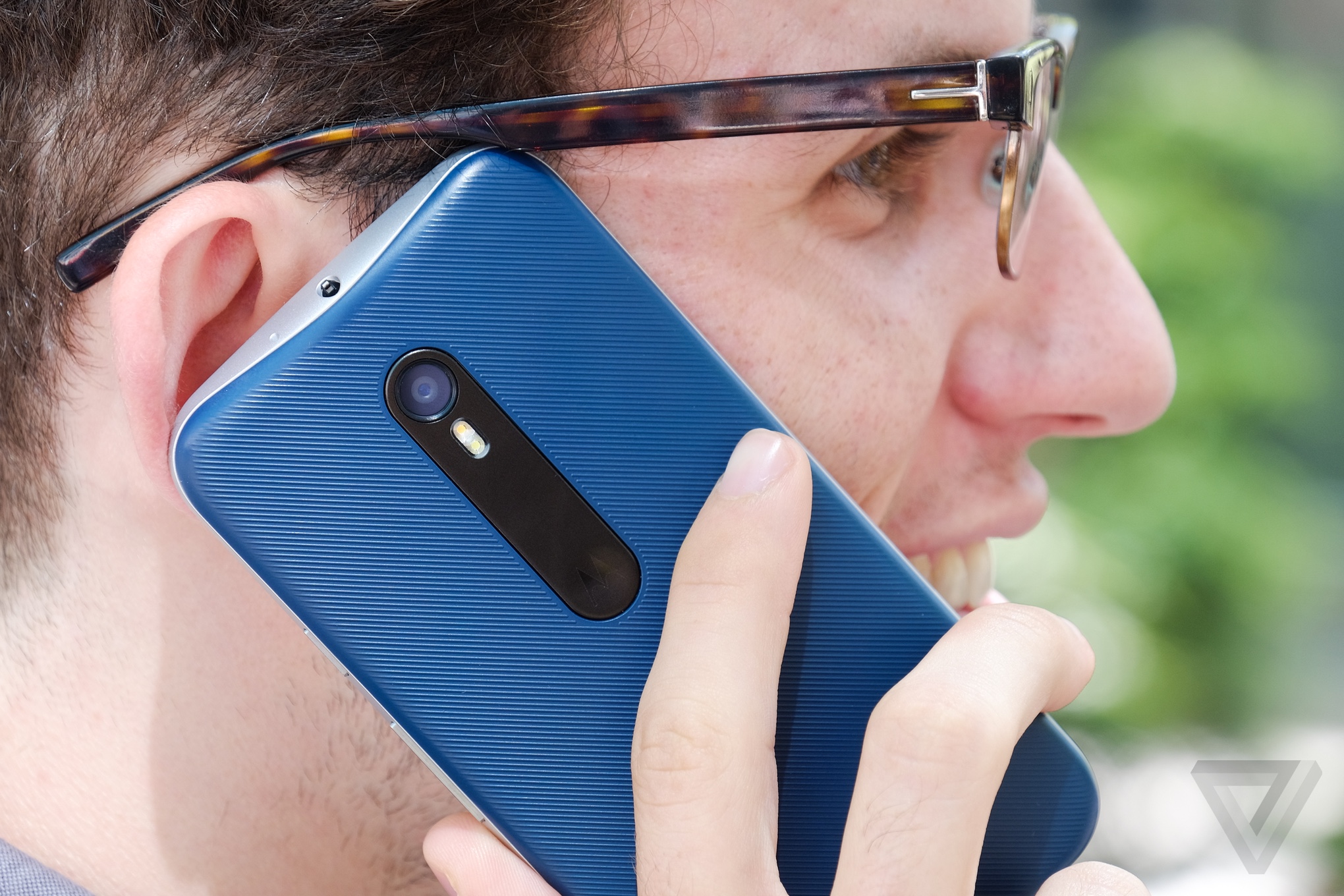 Fortunately, the Moto G's limitations don't extend to its overall performance. The phone ran quickly during nearly everything I used it for. Chrome could be a touch slow to load large images, and Instagram took a strangely long time to apply filters. But otherwise, apps run as smoothly as expected. That even extends to intensive activities like gaming: Crossy Road, Modern Warfare, and Subway Surfers all played entirely without issue, even if they might not have looked their absolute best.

That said, I was using the upgraded model of the Moto G, which sells for $40 more and includes twice as much RAM and storage (2GB and 16GB, respectively), so I can't speak to the performance of the entry-level model, which sells for $179.99. It's probably a good idea to jump up to the 2GB version if you're concerned about performance; as for storage, you can always expand that with a microSD card.

LTE comes in every model, but you'll probably still want to upgrade

Another of the new Moto G's strong points has to do with speed. This year, Motorola is finally adding LTE to every model of the Moto G. That may seem like an odd thing to praise a smartphone for in 2015, but it's worth remembering that LTE hasn't been common in low-cost phones until recently. It's particularly helpful here, as the Moto G doesn't include support for newer 5GHz Wi-Fi networks. That was actually an issue for me — 2.4GHz networks often get eaten alive in my apartment, so there were times when I was entirely reliant on the Moto G's data service. I'd love to see better Wi-Fi support, but LTE is still a big step forward as far as data speeds go. 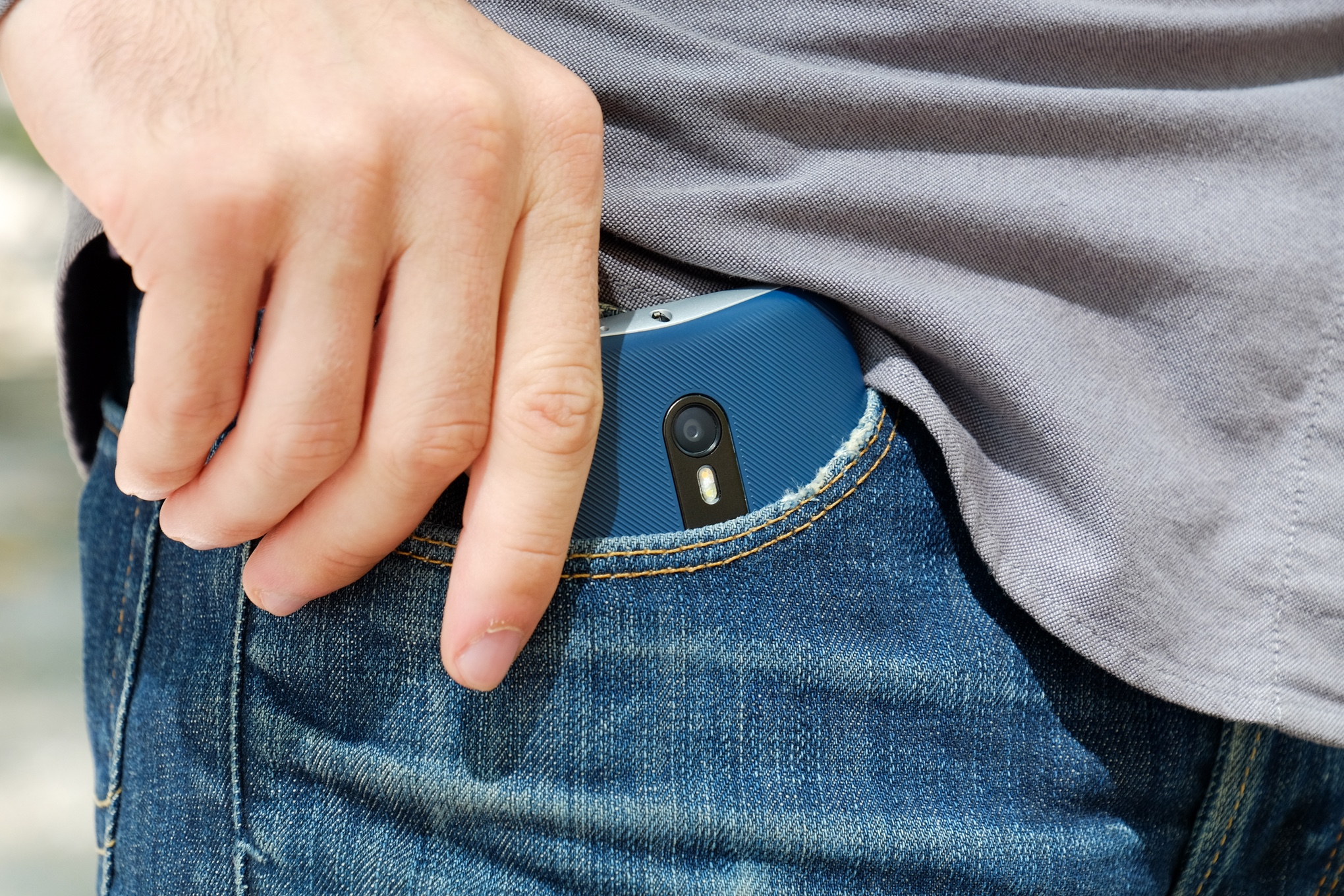 Some credit for the Moto G's great performance might be handed to Motorola for its decision not to weigh the phone down with odd software customizations. The Moto G is running nearly stock Android Lollipop (5.1). There are a few preloaded Motorola apps, but they all add useful features, which the phone is better for having.

Those features include Moto Display, which automatically displays the time and recent notifications when you pick up the phone, and some gestures that let you quickly activate parts of the phone. There are some quirks involved with all of these — the Moto G's flashlight turned on as I was hurrying up a stairwell one night because my arms were making the corresponding karate chop gesture — but by and large, they're worth keeping turned on. 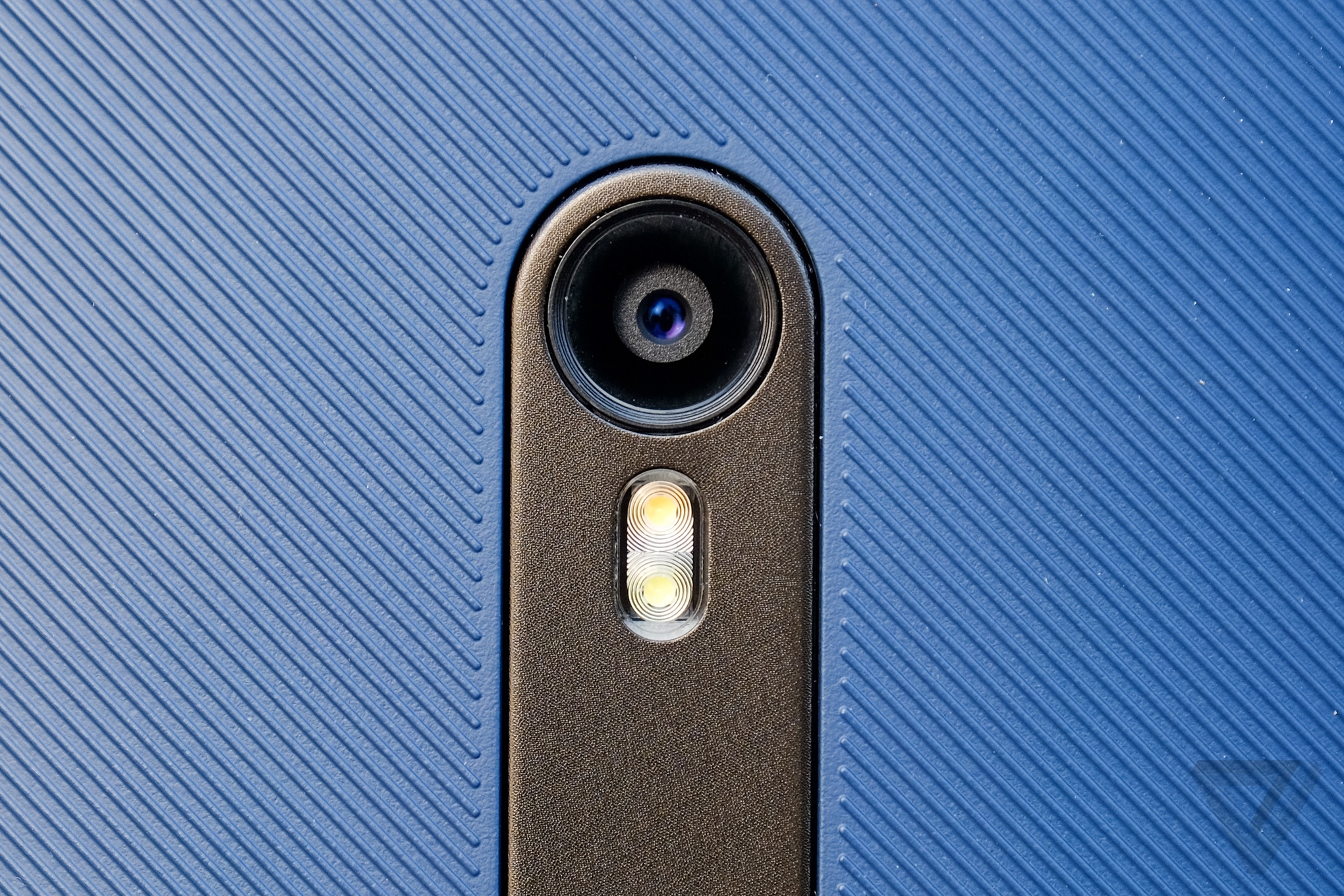 My favorite of these is a gesture that lets you open up the camera by twisting the Moto G twice at any time. I use this constantly: the Moto G's camera starts fast as it is, so this makes it incredibly quick to begin shooting a picture. The Moto G takes photos quickly, too. In fact, I wish it would pause a moment longer and take some extra time to process them, because here's where the bad news comes in: as much as Motorola boasts about giving the Moto G a "best in class" camera — which includes pointing out that it uses the same sensor as the much more expensive Nexus 6 — photos still aren’t where you'd want them to be.

The Moto G shoots photos that seem to have been processed exclusively for being displayed zoomed out on its own screen. At that size, they look pretty darn good. Photos taken in bright daylight can even look solid on a computer screen. But otherwise, the quality varies. The average photo ranges from bland when taken indoors to far too colorful and contrasty, especially when HDR is used outdoors (some photos look like they’ve already been hit with an Instagram filter, which I suppose you could argue is a positive).

In daylight, the camera struggles with hazy flares; in low light, you’re taking a gamble between a relatively useable shot and something that isn't at all in focus. Lack of detail is a pretty pervasive problem here, too. Try to crop a photo just a bit, and you’ll find that there’s no detail. Basically nothing is sharp; there's just that distinctly digital fuzz. If you're just using the Moto G's camera for Instagram and Snapchat, that's probably not a problem; but if you want amazing photos, you won't find them here.

On a brighter note, the added battery capacity to this year's Moto G does everything it needs to. Even while downloading apps, playing games, reading articles in Pocket, browsing the web, and doing a host of other activities in the course of reviewing this phone, I only ever managed to bring the Moto G down to around 40 percent battery by the end of the day. It's low enough that you'll still need to charge it every night, but it's high enough that you could probably get in a subway ride or two of gaming and still keep it going until you're ready to plug in at night. (In our battery test, which cycles through popular websites, the Moto G lasted for a little over nine and a half hours — for comparison, Samsung’s Galaxy S6 hung on for closer to nine.) 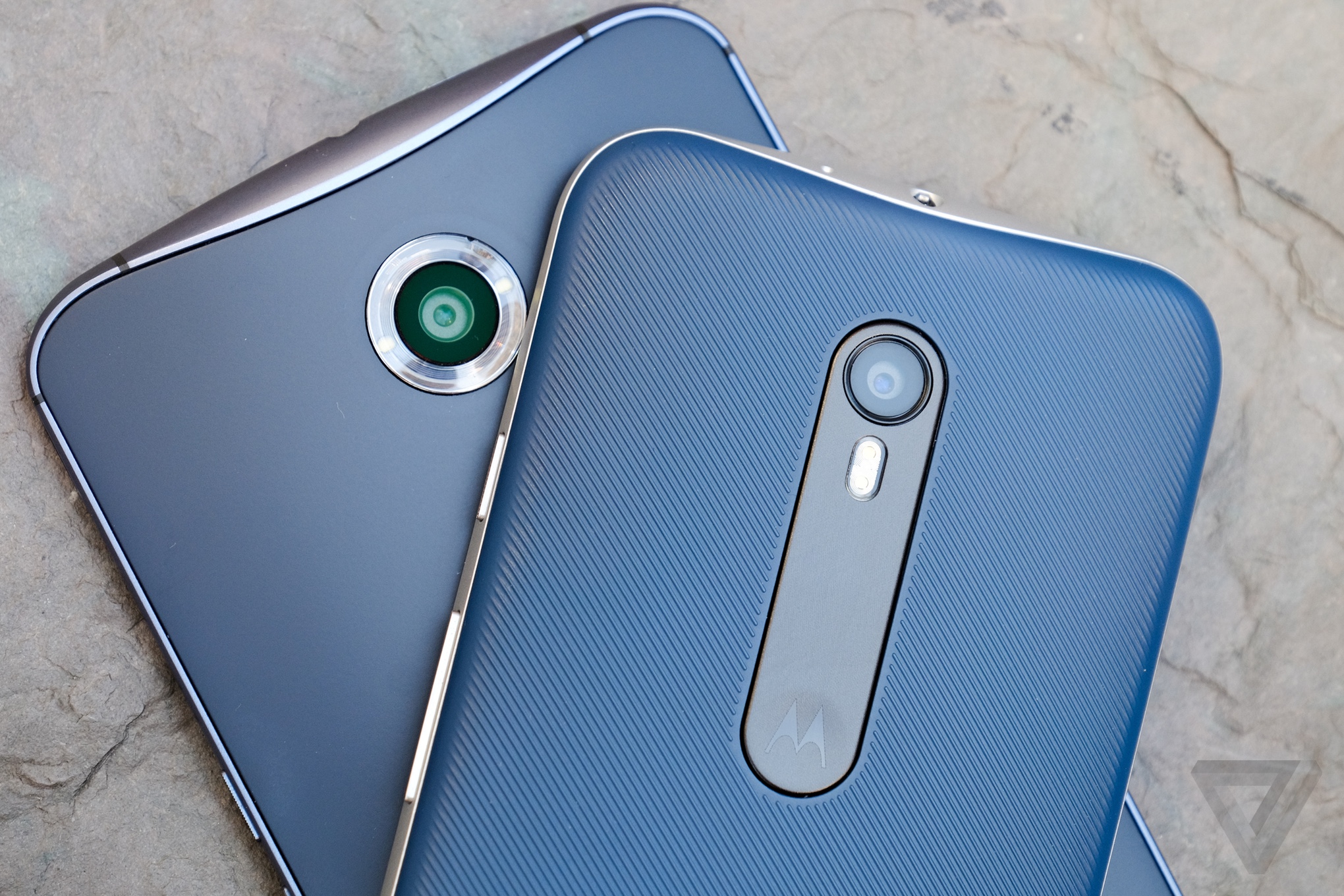 That's kind of the experience of using the Moto G: oscillating between being really impressed with what a $200-or-so phone can do, and then being hit with another limitation. You can't have an amazing display. You can't have a great camera. You can’t have the perfectly slim body. Not if you want to get an off-contract phone at this price.

But pricing is part of what makes the Moto G so impressive. It punches way above its weight. At $649 off-contract — like the iPhone — these issues would be obvious deal breakers. At $179 off-contract, they're still something to marvel at. Earlier this year, we named the Moto G’s 2014 model the best cheap smartphone you can buy; unless a surprise challenger comes along, it’s hard to imagine anything other than the 2015 Moto G taking its spot.

The Moto G often feels like the culmination of everything that Motorola has learned in the course of making its other phones. Yes, it's a stripped-down version of Motorola's so-called flagship, the Moto X, but it's by no means an afterthought. It's reason to question what a "flagship" really is. If a flagship is literally the standard-bearer, then it's worth remembering that the Moto G is the Motorola phone that most people are going to use — it's the phone that's going to define Motorola. When you consider that the Moto G is Motorola's "best selling smartphone ever," Motorola's top-of-the-line phones start to seem more like testing grounds than devices designed to take over the market. Given how impressive and popular the Moto G is, it’s hard to see it as anything but Motorola’s actual flagship.