The wasp larva uses the web to make a cocoon

By hijacking a spider’s nervous system, a wasp larva can manipulate the spider into making a stronger web, according to a study published yesterday in The Journal of Experimental Biology. Of course, that's right before the larva kills the enslaved spider its been feeding on for days — and uses the web to make a cocoon.

There's nothing subtle about the way in which the Reclinervellus nielseni wasp larva takes control of the Cyclosa argenteoalba spider's nervous system. First, an adult female wasp must attack a spider so it can lay an egg on the spider’s abdomen. When the egg hatches, the wasp larva feeds itself by sucking on the spider’s hemolymph — the insect equivalent of blood. This is probably where the mind control starts to happen; researchers think the larva "injects" the spider with substances that alter its web-building behaviors. So, when the larva’s done growing, it manipulates the spider into making a special type of web. As soon as the task is complete, the larva molts, kills the spider, and spins the altered web into a hanging cocoon that it can chill in for about 10 days while it develops.

Researchers have known about this twisted relationship for around 15 years, but until recently, the cocoon web itself was kind of a mystery. Scientists didn't now what differentiated it from the spider’s regular haunts. Now, an in-depth analysis of cocoon webs shows that they're very similar to the spider’s "resting web," which the arachnid uses when it’s molting. That said, the altered web isn't a carbon copy; it's actually a lot stronger. 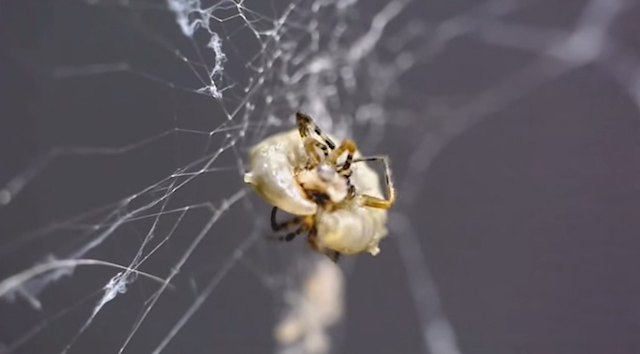 From the larva's perspective, this makes a lot of sense: a spider that’s molting only needs a resting web for a few days, whereas the larva will use the cocoon for about 10 days as it develops inside. So, by making sure that the altered web is stronger — and therefore more durable — the wasp ensures its survival, the researchers suggest.

10 days inside the spider silk cocoon

Of course, the strength difference could be completely coincidental, says Sophie Labaude, an ecologist at the University of Burgundy in France who didn’t work on the study. If the wasp larva really does trigger cocoon building by injecting chemicals into the spider, then it’s possible that the chemicals’ composition is just different enough from the spider’s natural hormones to cause the distinction. And because the study was done in the lab, it’s hard to know if the results are representative of web-building behaviors in nature. Overall, the work is interesting, she says — but it’s "mostly based on suggestions." 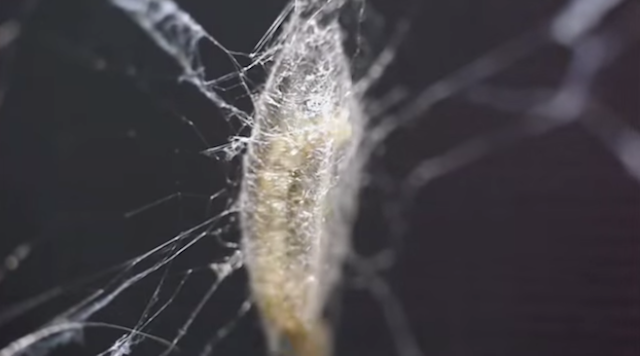 The animal kingdom is full of manipulative relationships like this one. Scientists have identified a fungus that "enslaves" ants, a parasite that causes shrimp to eat their young, and a fluke that makes killifish jump so they're more visible to hungry water birds — to name a few. But even though researchers know these relationships exist, most remain deeply mysterious. "Although we revealed why the wasp larva manipulates the spider, how it controls the spider is still veiled," says Keizo Takasuka, a biologist at Kobe University in Japan and a co-author of the study.

Parasitic organisms have evolved a ton of biological mechanisms to cope with a host’s resistance or ecology, Takasuka says — and scientists are just starting to understand how it all works, or how we might use this information in the future. These "wonderful adaptations are seemingly useless for human welfare," she says — but that doesn’t mean studying them isn’t worthwhile. They "may have invisible potential."