2009 was an exciting time for mobile games. The App Store was new, and game developers were still trying out strange and inventive ideas for touchscreen gaming, without having to worry about payment models or an over-flooded market. One of the best of that early wave of games was Spider: The Secret of Bryce Manor, where you played as a tiny spider, spinning webs to eat bugs while also exploring a sprawling house filled with secrets. It was an entirely unique combination of gameplay and environmental storytelling. Now, six years later, an eternity for mobile gaming, a sequel arrives: Spider: Rite of the Shrouded Moon, available today on iOS and Steam.

“In a way that first game was like a micro-expression of the idea,” says David Kalina, from developer Tiger Style Games. “And so this was an opportunity for us to revisit, and go a lot deeper to explore the mechanics and the universe and the atmosphere in a much richer fashion.”

Just like the original, Shrouded Moon puts you in the role of a tiny spider in a huge house. You explore one room at a time, and the core gameplay revolves around spinning webs to catch bugs. Eat enough bugs, and an exit will open letting you move on to the next stage, and you can earn high scores by eating bugs quickly and making better webs. The game manages to stay fresh with different types of insects and room layouts. At first glance, the Spider games look like fun, casual diversions not entirely unlike the glut of mobile games out there, but there’s more lurking beneath the surface.

"You get a sense of ownership that’s stronger."

One of my favorite things about the original game was its sense of mystery. There’s a story that unfolds, but it’s not told directly through cut scenes or dialogue. Instead, you piece it together yourself through careful observation. You may find a hidden drawer in a dresser, or stumble across a scene that tells its own tale: like a pile of bloodied, broken glass in a sink, or scattered toys abandoned in a farm. Exploring someone else’s house can be incredibly intimate, and when you’re the size of a spider, secrets you normally wouldn’t see become towering set pieces.

This was a relatively small part of the original game. It helped create a cool vibe, but unless you were really looking for it, you probably missed much of the story. But in Rite of the Shrouded Moon the narrative elements are much more pronounced. Finding clues and piecing them together will help you unlock new areas to explore, and the house itself just feels denser and more real, so you’ll regularly stumble across mysteries without even trying. As you play, you’ll uncover details of a secret society, but the mystery never interferes with the actual game: you don’t have to stop to read some text to learn what’s happening. You can play like a tiny detective, piecing together clues as you go. Or, you can just pass some time on the commute.

For Tiger Style’s Randy Smith, sticking with this kind of non-intrusive, environmental storytelling technique was a no-brainer. "If you’re someone who really likes playing detective in Spider, you can stop and examine all the clues carefully and take notes, but you don’t have to," he explains. "I think you get a sense of ownership that’s stronger, because instead of the story forcing itself down your throat, you have to go pull it out of the environment. It’s your responsibility." 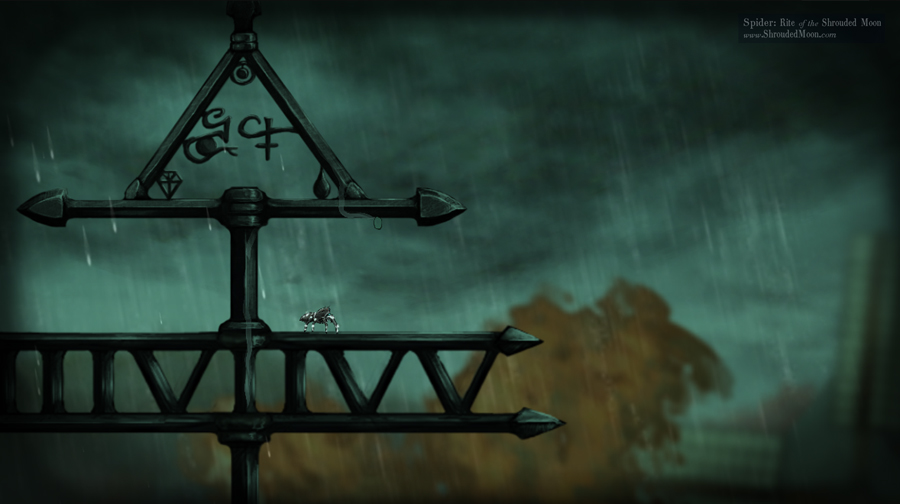 The other big change in the sequel is the new time effects: the levels will actually change depending on the real-world time of day and weather. If you play during a rainstorm, for example, certain areas might be inaccessible because a pool of water is blocking the way. At night, different kinds of insects come out. The changes are big enough that some clues can only be found at a certain time of day or during certain weather (you have the option to change the time / weather in-game, but the feature can only be used so often). "It was a pretty natural fit," Smith says of the addition, "because weather and time make a big difference to the life of a spider. Even a tiny drop of rain is very important to a tiny spider."

Overall the sequel feels like a larger, more refined version of the original, yet it’s still incredibly unique. Over the course of the last six years, there still isn’t anything quite like Spider. It’s also more than a mobile game this time around: in addition to iOS, a PC version of Shrouded Moon is also available on Steam today, while PS4, Vita, and Android versions are coming later on. "This game is intended for a broad audience," says Kalina, "so we want to play as many cards as we can and get the game in front of as many people as possible." That’s also the reason it isn’t called Spider 2; it’s a game you can play whether or not you experienced the original.

Shrouded Moon may be a sequel, but Tiger Style is a studio dedicated to creating new ways to play and tell stories in games. In between the two Spider games, the studio released Waking Mars, a non-violent action game where you revitalize an alien world by doing what is essentially sci-fi gardening. It’s a safe bet that what the team does next will be a similarly offbeat departure — though they have no idea what that might look like just yet.

"It’s hard for us to guess what we’re going to do next," says Smith.

Spider: Rite of the Shrouded Moon is available today on iOS and Steam