Dragon Ball Z is one of the single most beloved anime properties in America. After getting a slow start in syndication back in 1996, the series — starring kind-hearted warrior Son Goku — exploded into the mainstream after launching on Cartoon Network’s Toonami block in 1998. In the 16 years since, fans have seen veritable boatloads of toys, merchandise, and video games inspired by the show, along with a fandom so massive as to produce funny, abridged retellings of the series along with whole sequel efforts long after the original creator moved on. Purists might have strong opinions about whether or not it’s the best anime ever, but for many it was the very first they ever watched, opening the door to an entire art form.

Part of the show’s success is undoubtedly the voice acting. That’s a fairly unique trait; American dubs for Japanese animation have a long history of being less than stellar. However, since the dub is so foundational for fans, the voice acting talent have managed to leave their mark on the characters they play. Sean Schemmel and Christopher Sabat have played the series’ hero Goku and nemesis-turned-ally Vegeta, respectively, since 1996 — on the show, in movies, and in video games — and for many fans, their voices are now inseparable from the DBZ experience. Casual fans might not know their names, but mention the Kamehameha or Final Flash, and they’d know the voices firing those attacks in an instant.

Schemmel and Sabat are almost inseparable from the DBZ experience

The Dragon Ball Z saga continues to this day, with the feature-length Dragon Ball Z: Resurrection ‘F’ currently in theaters. And with new series Dragon Ball Super currently airing in Japan, it won’t be long before a new dub arrives in the States. I sat down with Schemmel and Sabat this week to talk about their work as voice actors and how the show has impacted their lives.

Kwame Opam: So, for a lot of fans in the States, Dragon Ball Z was the first anime that they ever watched. With the new series coming up and now the movie, are you shocked at how much longevity this series has had?

Christopher Sabat: None of us expected the series or for any of us to be working on the show [to continue] for so long. I mean, granted, longevity means the series is in demand. It was around a long time before we even started. But, I don't think any of us imagined that it would be for 15 years.

Sean Schemmel: I didn't either. The only thing that makes it less shocking for me is that the Japanese seem to like very long series, like Naruto, Dragon Ball, Pokémon, One Piece. So for anime itself, I'm not shocked. But given my association with those series, I agree with Chris. I'm more shocked that it's popular in America.

You both voice Goku and Vegeta, respectively, and a number of other characters on the show and across media. You've even developed your own fanbases. What's it like living with that?

SS: It's exactly like [being] A-listers, watered down by 1000 percent, where you have like one stalker, or maybe sometimes they'll meet you at the airport and then you have some drama, and then one-thousandth of the money. So it's exactly the same, just watered way down.

CC: And you only get recognized at GameStop and grocery stores.

SS: And the Los Angeles DMV, which I was recognized at when I moved to LA. I was there going to get my girlfriend her license, and some kid walks up to me, while I'm in line and goes, "Hey, are you that guy who plays Goku?" I get recognized like one-thousandth of the time.

Do you guys ever step into character in everyday life?

"The line between Goku and me is really blurred."

SS: Well, I've been playing the character for so long that the line between when I feel like Goku and me is really blurred, and sometimes I forget that I actually play this character until someone does something very polite like "I love your work" or recognizes me. I've been doing it for so long. Really, it's not that I don't say, "Time to be Goku", but I don't really feel any different. It's kind of disconcerting to me, and I think I should just see a psychiatrist.

CS: I don't. I'd say Sean has a different relationship with the character than I do, because I've been at times very close to them, but the characters are so incredibly mean and ruthless all the time, and that's not necessarily my personality. However, I think the people who see me after a recording session for the show believe that I channel the characters. You're screaming in a booth for six, seven, eight hours in a row, you become kind of, well, for lack of a word, an asshole and you're exhausted and you're very short with people. In that respect that's the only way I channel the character.

Could you paint a picture of what a normal day is like for you guys?

SS: Well, back in the day, when we first started on Dragon Ball Z, there were Cartoon Network production crunches, and I was living in New York and would have to come back [to Los Angeles] to catch up. I would literally work a dozen 12-hour days in a row with about two one-hour breaks in between. And that was the worst! And now it works out to 12 hours out of 12 days.

I don't have a problem with the hours. It keeps it moving forward, and it gets a lot done. Actually, when I pull a four-hour shift, I'm like, "That's a little short to me", so I need about two hours to warm up.

CS: My life is different from Sean's. Sean is strictly busy working on a ton of things. A lot of things, not just Dragon Ball. And I always keep myself kind of busy too, but the work that I do as the voice director for the show involves making sure all of these very talented people can get to the studio and work more than two out of 12 hours. So, most of my job is getting the scripts ready, getting everything prepped, working with Justin [Cook, Funimation ADR director] to make sure that we're on schedule. It can be a really exhausting process. Whereas you're seeing these videos on the extra features of certain Disney movies where it just looks like all the actors are in a room, and Michael J. Fox and John Belushi and a bunch of other people filming things right now are sitting in their rooms having the most fun they've ever had, we're strictly cramped in a relatively small room by comparison, screaming for hours and hours. Whereas cartoons like The Simpsons and South Park are what’s called pre-lay shows where they all sit in one room and voice it, because of the timing nature of dubbing a show that's already in Japanese into English, it's a very slow process and it's a grueling process. You go line by line, character by character, so most actors will only ever work with me, the director. They won't actually work with any of the other actors while they're performing. They may hear them in their ear, but they won't actually be in the booth with them. So it can be a very solitary process. 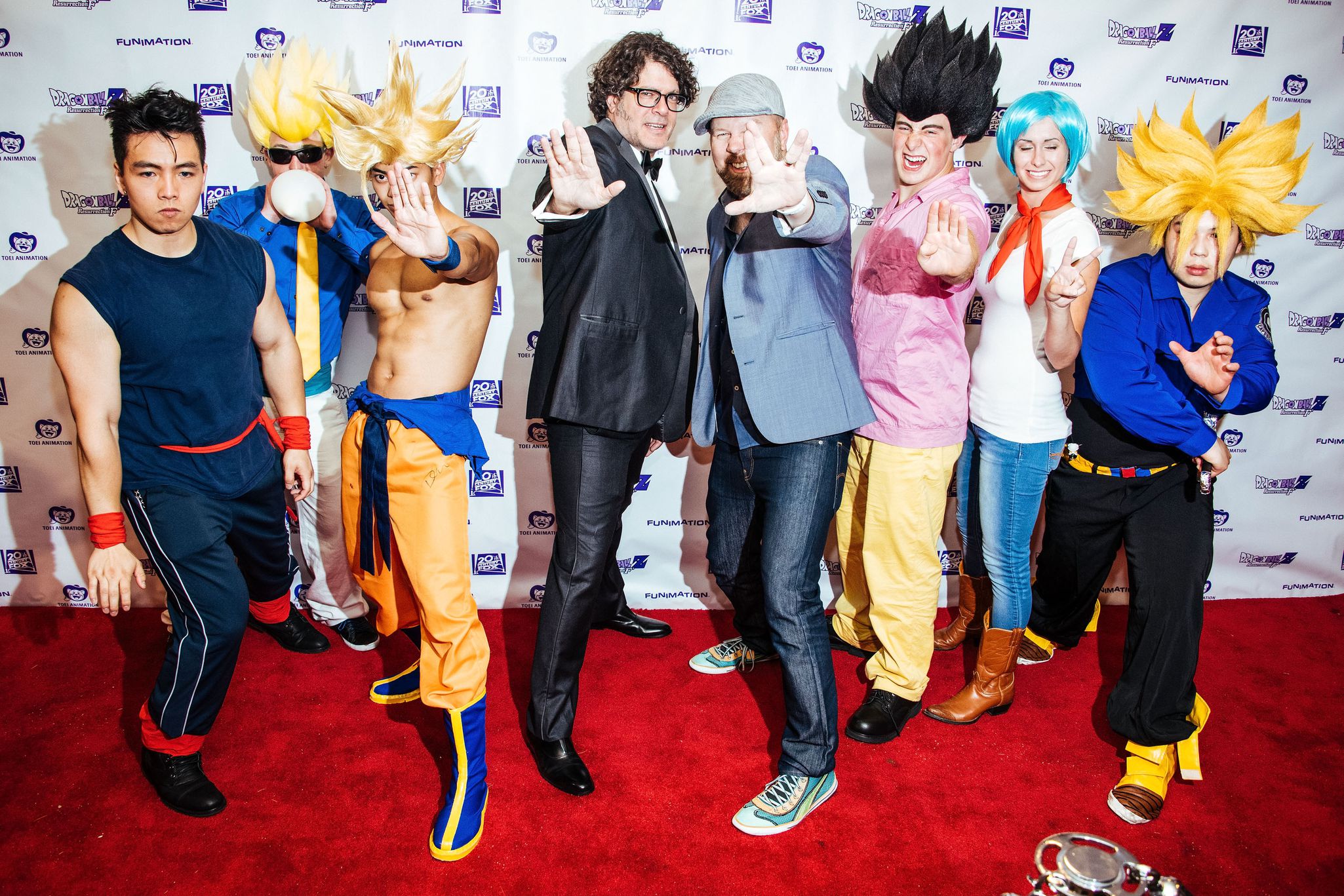 Since it's so grueling, does that keep you both from working on American animated properties?

SS: It does, and actually that is one of the things that people find in contracts regarding overall stress. They’ll warn you before a job that this work is stressful, because they know they may be taking you away [from other opportunities]. If I work on Dragon Ball Z Monday through Wednesday, forget it! I'm not working on another show. And that can be a problem for other shows you want to work on, or being able to be a viable voice actor.

CS: Sean lives in Los Angeles now, so he has access to a lot of different types of shows that we don't have access to in Dallas, per se. But in Dallas, there's actually an extremely strong anime market. Funimation has the largest selection of anime out there, so we're constantly dubbing a lot of shows. So if you live in Dallas and you're a voice actor, as long as it's not a show that you're screaming all the time, you can actually work every single day. There are certain days, like working 40-50 hours a week just doing voice work on anime alone. So it's definitely a different market in Dallas.

Dubbing is hard, but it's also kind of polarizing as far as the fandom is concerned. Like a lot of people like the voice acting, but a lot of people prefer subbing. How do you navigate that? Is it really just the fact that you can't please everyone?

"Most people grew up not knowing there was a subtitled version of DBZ."

What about industry wide?

CS: I was actually shocked to find out the other day, because I was looking up my anime voice actor's profile, that I've had 600-something roles in anime. It's been a lot. Thing is we are so busy working on it, and we’re usually so ahead of the releases, that a lot of time we don’t hear about the fan reaction to it. And most of the time when we do, it’s at a convention, and when people love what you're doing. I think what dubbing anime does is allow people who love Japanese animation to have two different options of what they like. It’s exactly like when I buy a movie from overseas and I'm watching a feature in another language. I'm going to watch the subtitled version. The thing about anime, though, is you keep the mouth movements, which is pretty much like localizing in any language, which leads you to enjoy both ways. It’s very unique that anime has a lot of love for the voice actors for what’s essentially just an English audio option on a DVD.

Verge Video The life of a voice actor from the man behind Archer, Bob Belcher and Coach McGuirk