DJI Phantom 3 review: the best drone you can buy just got even better

I spent some time at a drone conference hosted by NASA last week and it’s increasingly clear that in short order there will be tens of thousands of companies flying drones just in the US. Everyone from real estate and insurance agents to traffic cops and wedding photographers are applying for permission. Meanwhile, tech titans like Amazon and Google are preparing to launch massive drone fleets over our major cities to deliver packages.

The consumer market is also booming, with both DJI and Parrot posting incredible revenue growth. I used to recommend drones to people who enjoyed flying or were interested in aerial photography or video. But given the trajectory of the industry, I think any gadget lover could think about buying one, just to familiarize themself with this incredible and rapidly proliferating technology. Think of it like being one of the first to take the plunge and buy a personal computer at the dawn of that market.

So which drone should you get? The Chinese startup DJI is far and away the most popular and profitable maker of consumer drones in the world. Its aerial robots hit the sweet spot: easy enough for beginners to use out of the box, but powerful enough that two thirds of the companies flying drones for business use the exact same units. With the release of its latest model, the Phantom 3, DJI is extending its lead on the competition. Like the iPhone, the design of each new Phantom is virtually unchanged, but a slew of improvements under the hood unsure that the best had gotten even better. 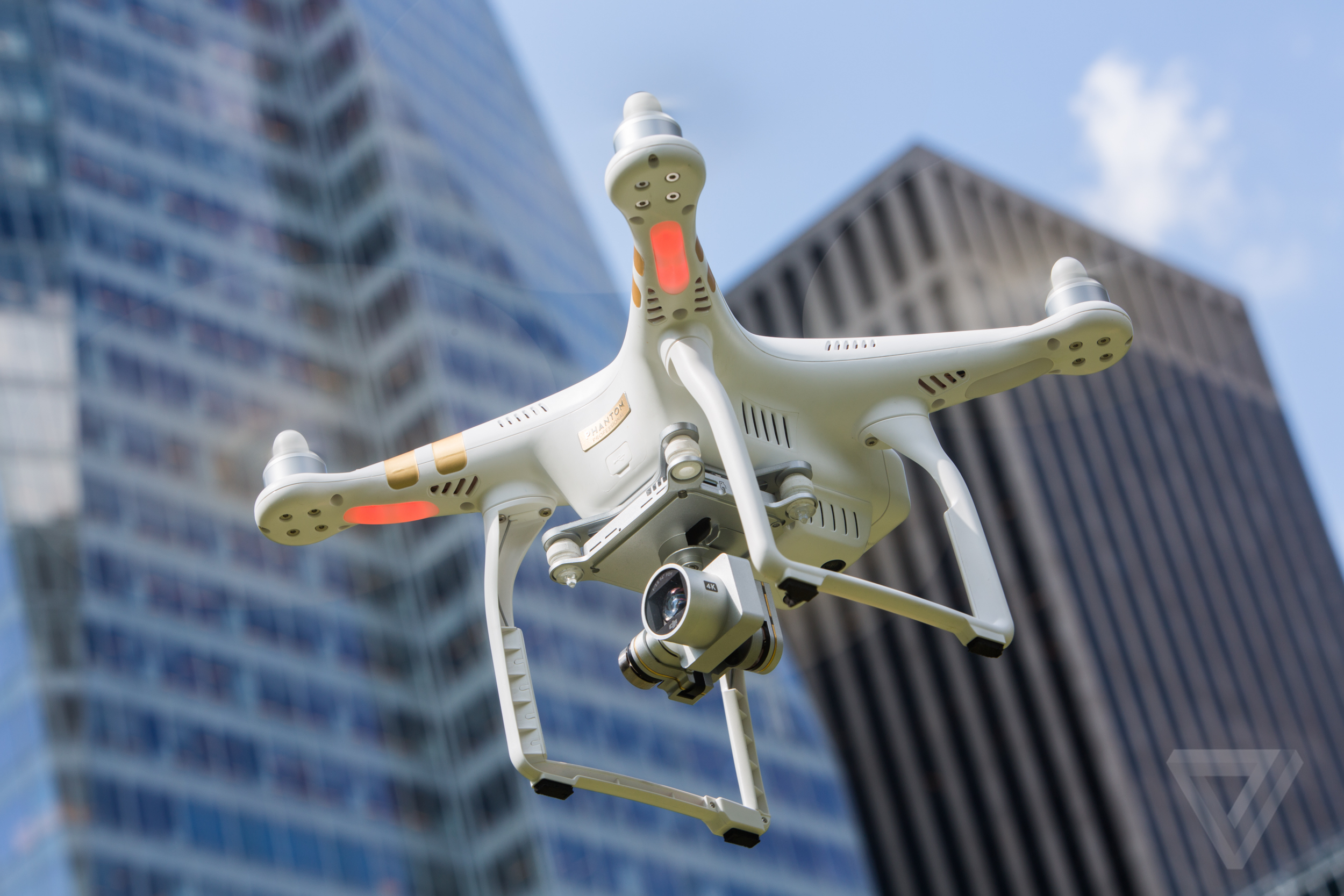 The most important feature of any drone is that you can trust it will follow your commands once you put it in the air. A computer and a drone can both crash, but only one will fall out of the sky. I’ve been flying the P3 for almost a month and have not once experienced any erratic or buggy behavior. In fact, the first thing you’ll notice about the P3 is how rock solid its positioning is. Most drones use GPS satellites to find and hold their place, but DJI has added the ability to work with GLONASS, a Russian counterpart to GPS. This means the P3 finds more satellites, and finds them faster, all of which translates into terrific performance.

DJI is extending its lead over the competition

When you can’t find a satellite signal (like when flying indoors), the P3 uses a visual positioning system enabled by a downward-facing camera. This feature, which first appeared on the more expensive Inspire 1, works well when the conditions are right. If you’re flying over a surface with good contrast, say a checkerboard tile floor, the P3 is quite stable, and will return to position when pushed. If you’re flying over a surface with a uniform color and texture, maybe a white linoleum floor, there isn’t much for the system to see, and it doesn’t work well.

I got stuck repeating the compass dance
Getting the most out of your position systems requires calibrating the compass whenever you arrive at a new location. You need to do an odd little "compass dance," spinning the drone 360 degrees on its X and Y axes. Sometimes this worked right away, other times it failed to calibrate after several tries, warning me that there might be electromagnetic radiation about, and forcing me to repeat the whirling dervish act.

When all (or even some) of those positioning systems are working, the P3 feels a bit like magic. It goes where you tell it and doesn’t waver. Nine times out of ten when I was ready to land I would just bring the drone down and catch it with my hand, a sign of just how much I trusted this thing. 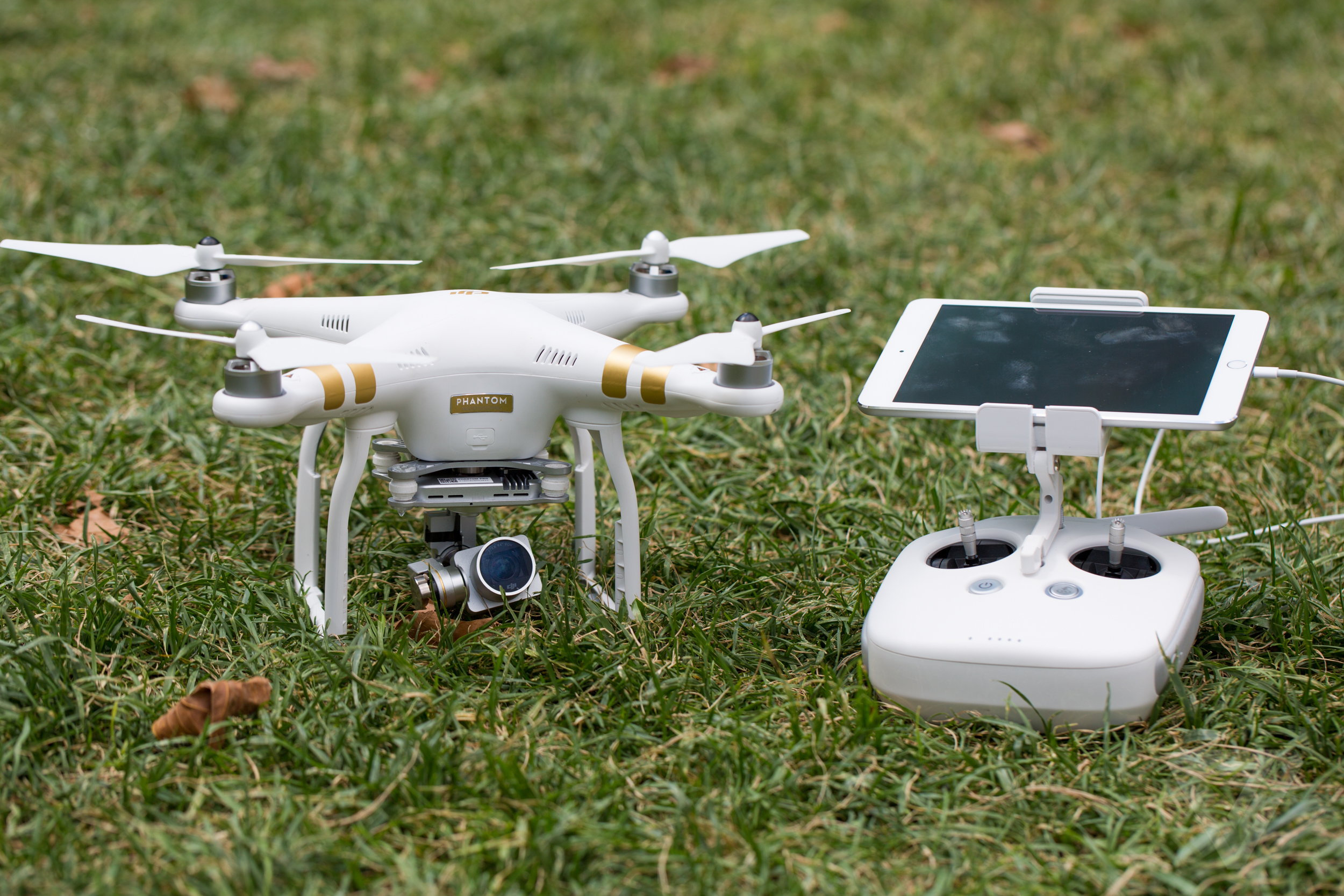 There are several models of the P3: all have the same body and flight controllers, but different cameras. I only got the chance to test one model: Professional, so my experience is limited to that. That said, I got great 4K video in all different kinds of light and crisp 12 megapixel still images. If you leave the drone to hover, the video looks as though it was captured on a tripod, even when you’re several hundred feet in the air with moderate winds. The only drawback of the incredible stabilization is that when you rotate the drone horizontally, or pan the camera, the footage has a strange, stilted quality. This is a category-wide problem, although I’m hopeful that the Solo, from 3D Robotics, will solve it by building in what Hollywood folks call "easing."

Hovering in the air looks like shooting on a tripod

The battery life on the P3 was a nice improvement over its predecessor. I routinely got 20-25 minutes of flight time, versus the 15-20 minutes I got on the Vision 2+. The upgraded battery means this unit is not compatible with older versions of the drone or charger, and vice versa, which hurts if you already shelled out for extra batteries on previous Phantoms. And you only get one battery with your purchase. It takes 40 to 50 minutes to get a full charge, and the charger can now power up your battery and remote control at the same time.

The remote control now has an advanced video downlink system integrated directly inside, called LightBridge. That means an accessory which the company still sells for $1,400 now comes standard on a $999 drone. It also means you no longer need to worry about having the external Wi-Fi extender, which you needed to charge separately and clip onto the previous remote. That’s a big improvement, simplifying the amount of gear and preparation required. You don’t need a mobile device to fly the drone — it works with radio signals — but to really get anything out of it you will want to attach a phone or tablet to your remote using a USB connection and fire up the app.

I got a live video feed from 4,500 Feet
The LightBridge also extends the range at which your mobile device can receive a live video feed of what the drone’s camera is seeing. I got to roughly 4,500 feet, and in videos posted online, users show flights that clock in at three miles. Technically, you can still control the drone once you’ve lost a visual, but I don’t feel comfortable doing that just yet, and at that point your unit would probably be well beyond the line of sight, which is against FAA regulations here in the United States. 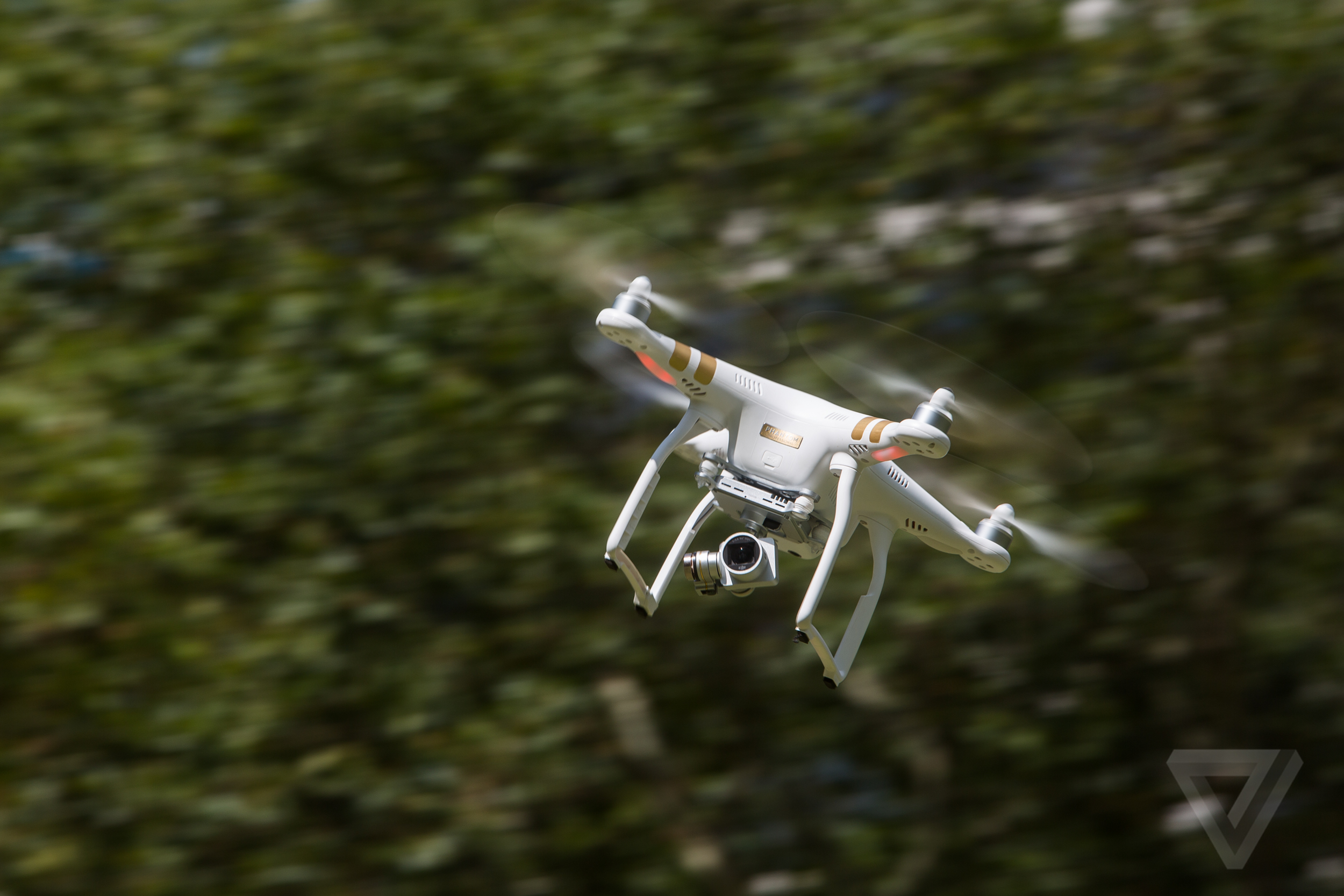 The LightBridge brings a couple more cool new features to the P3. It lets you cache video on your mobile device while you’re still in the air, meaning you could fly into a volcano and still have the footage if your drone took an accidental lava bath. You can even edit and share video from inside the app while your drone is still in the air. All this leads us to the marquee new feature that LightBridge enables: live streaming.

Live streaming is very cool, but not very consistent

You can broadcast from the app to YouTube or Youku, the Chinese equivalent, but in my testing the live streaming feature was hit or miss. It doesn’t work very well over LTE, and sometimes performs well over Wi-Fi, while sputtering out on the same network during the next attempt. Originally it had both audio and video, but after an update this week DJI removed audio, an attempt to improve performance, but one that removes a lot of the fun and capability from the broadcaster.

Where's Periscope and Meerkat?
When it does establish a strong connection and everything works, it’s pretty mind blowing. As a journalist, this new ability opens up some really amazing possibilities. You can do the kind of breaking news that used to require an expensive helicopter and trained pilot. You can provide aerial footage of sporting events or a live tour of events or even protests. For the average consumer, I’m still figuring out applications for this, in the same way the average consumer is still figuring out how the hell to use Periscope and Meerkat (connecting this feature with those popular apps would be a great upgrade, by the way). I can imagine it would be very cool to do a live broadcast of your daughter’s soccer game for family around the world, showing the entire field of action. Drones are now a regular part of capturing the magic of a wedding, and a live stream for friends and family who couldn’t attend might be amazing.

The P3 has several features that are now industry standard, like takeoff and landing with the push of a button or swipe inside the app. I found that it never had trouble navigating a safe landing, even in tall grass. There is also a return to home function that will bring the drone back to where it took off or to the spot where your controller is currently located. This is the kind of feature that is crucial for beginners. If you lose sight of your drone or are feeling nervous, press the button and it will move toward an altitude of around 100 feet while heading back in your direction. I found that it usually landed within four to five feet of where it started. You can interrupt it at any time to regain control of the drone. 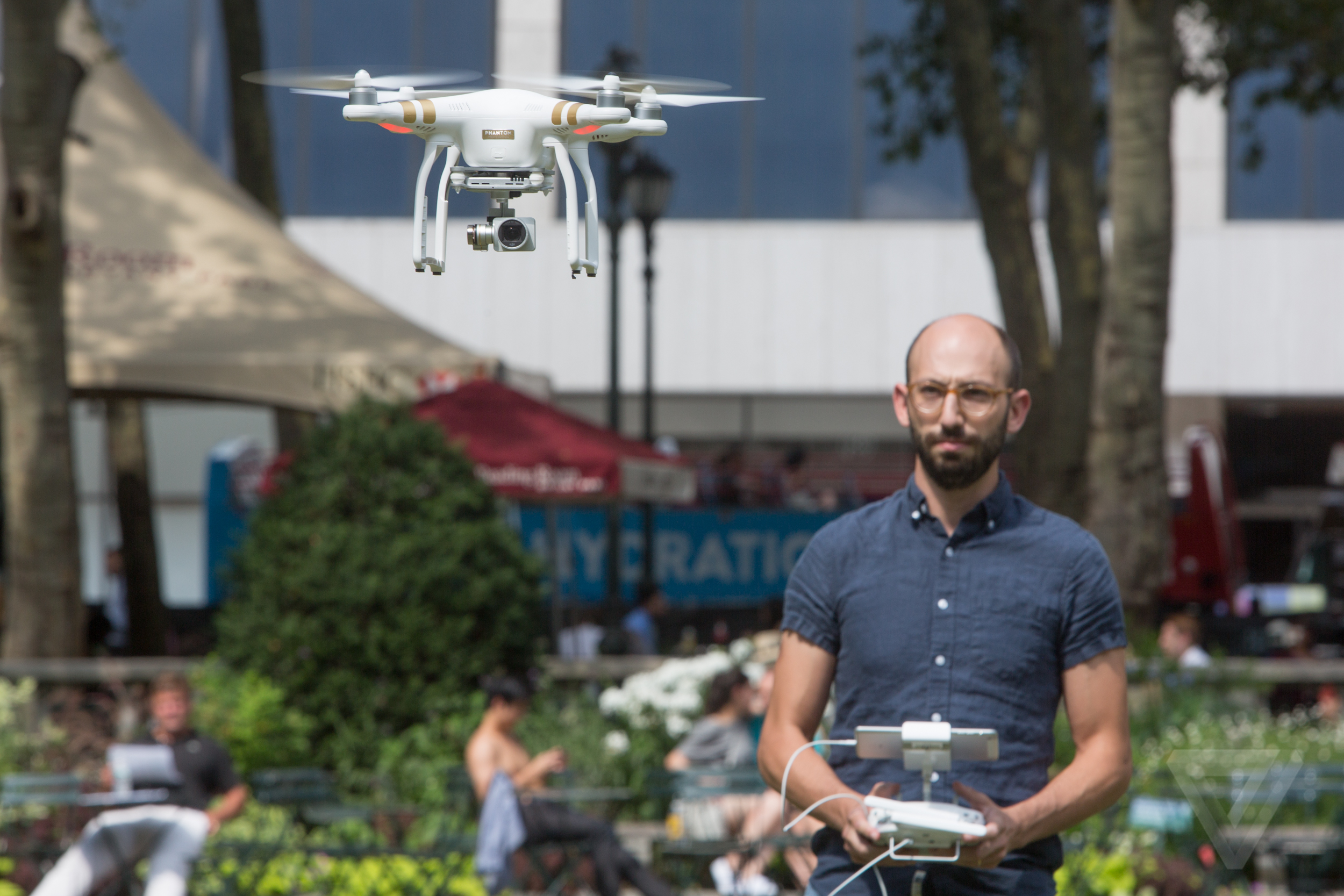 There are three models of the P3 to choose from. The cheapest one is the Standard, at $799, and you’ll lose most of the high-end hardware that's new on the Phantom 3: no downward-facing camera, no LightBridge video downlink for live streams, and no ability to connect with the GLONASS satellite positioning system.

Drone owners are pioneers of tech that will become commonplace
But compare that low-end version to the $699 DJI Vision 2+, and it starts to look more compelling: you’ll get a better camera, better range, a better remote, longer battery life, and access to apps that work with the Phantom 3. So if you're deciding between a $700–$800 drone, get the Phantom 3 Standard, not the Vision 2+. But if you have $800–$1,000 available, you should definitely splurge on the Phantom 3 Advanced, which offers all the features that the Standard lacks. And if money’s not an object, get the Professional and capture that sweet 4K footage.

I would recommend the new Phantom, like its predecessors, as the best combination of price, power, and ease of use for people who are seriously interested in a really good drone. It’s the right drone for a total beginner, and advanced enough for a professional. That’s an easy sell if you’re interested in learning to fly or want to get involved with aerial photography and video. I’m not sure yet when, or if, owning a drone will become as commonplace as a smartphone, but I feel confident predicting that they are about to be everywhere.

A generation of people were lucky enough to learn on the very first personal computers and got to shape the world we all live today. I’m really starting to feel drones are the same kind of thing: a little taste of the future for anyone who’s willing to invest time and energy in something that remains a little more challenging than your average gadget.