I spent a lot of time late Sunday night entertaining a sleep-deprived theory that Miley's VMA hosting gig was a setup. I mean, everything's a setup in some way; gathering hundreds of the most followed people on Twitter under the hallowed roof of something called the Microsoft Theater is a setup within a setup, a canvas upon which countless profitable setups can be executed. On first glance, Viacom giving Miley Cyrus carte blanche on live TV for three hours seems like a gift, a cynical holiday bonus from a company whose dwindling relevance was temporarily decelerated in 2013 by her headline-grabbing twerk-like gestures and tongue gymnastics.

But it's not as if MTV's parent company Viacom had nothing to gain from the transaction. Through Miley they could promise a night of extreme FCC button-pushing; she could be a mascot for a web-art damaged brand of internet-era irreverence that would make them look "dope" and "edgy" without being "too weird" or "not GIF-able." And in return, Miley would be given the stage on which to light her own career on fire.

"You made it about you."

She set the groundwork for this days before the show, when she sat down for an interview with The New York Times to promote the awards show. The conversation came to the recent Twitter exchange between Taylor Swift and Nicki Minaj, and Nicki's claim that the VMAs were quicker to reward female artists of a certain race (white) and a certain body type (model-thin). Swift read that general, completely valid criticism as a personal attack on her and her 2015 Video of the Year award-winning "Bad Blood" video; anyone who's been watching Miley closely for the past few years could easily predict that, if asked, she would read it as a direct attack on her and her 2014 Video of the Year award-winning "Wrecking Ball" video.

"It’s not anger like, 'Guys, I’m frustrated about some things that are a bigger issue,'" Cyrus said. "You made it about you. Not to sound like a bitch, but that’s like, 'Eh, I didn’t get my V.M.A.'"

here's a goddamned rant if i ever saw one pic.twitter.com/X460MiL5HJ

It's not the greatest form of all time to editorialize about any nominees in an awards show you're about to host, no matter how crazy and unpredictable a reputation that awards show needs to uphold. 1But anyone could have predicted that Miley would take the bait. Because, of course, "I'm frustrated about some things that are a bigger issue" is exactly how Minaj has framed her argument all along. "Making it about you," meanwhile, is something that Miley Cyrus (and Taylor Swift) have been excelling at for years.

And this was the setup for Nicki's show-stopping call-out during her acceptance speech for her Best Hip-Hop Video award, a moment that put Miley on the defensive for the rest of the night. However orchestrated that moment may have been, it made Nicki look righteous, and Miley look woefully out of touch, sputtering in her defense ("we all say things in the press,") from underneath a neon visor as two giant eyeballs drooped off of her breasts. She looked like the rich girl whose birthday party everyone’s parents forced them to go to, if that girl was also wearing white dreadlocks while defending herself from being implicated in systemic pop cultural racism.

Here's where I have to say that the "approach things from a place of love" counterargument is the most privileged counterargument ever devised in Faux Hippy Rhetoric 101. 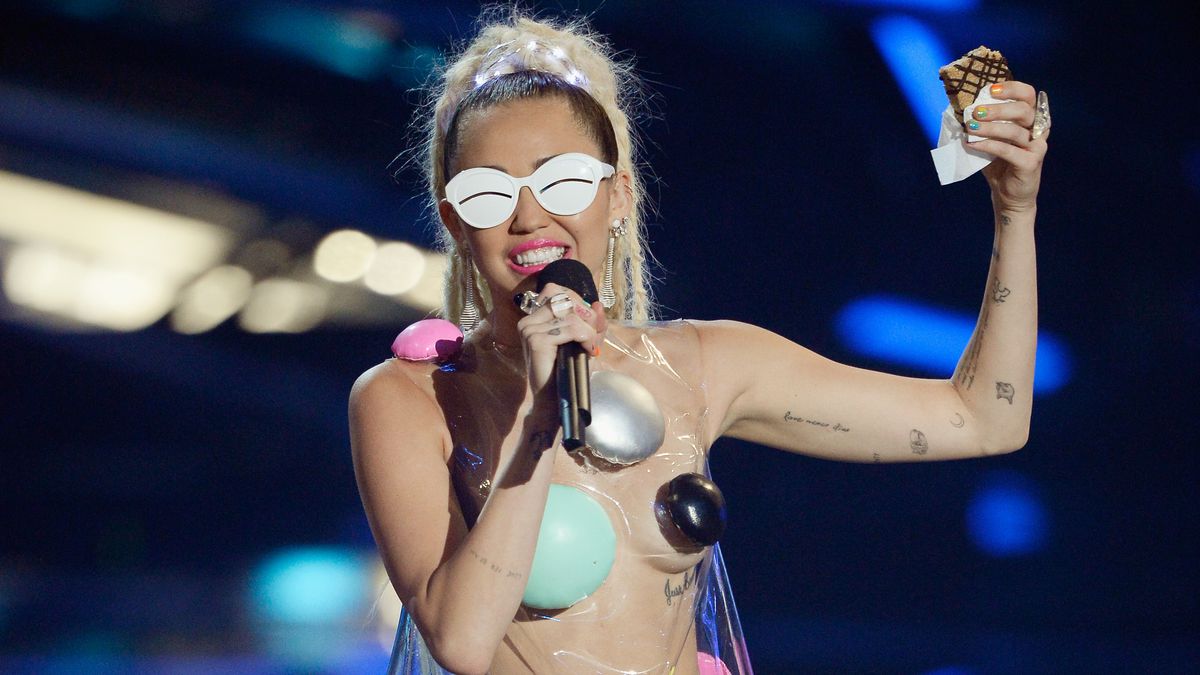 Sunday night was a vivid reminder that Miley was brought up to be a child star. She almost can't help but suck up all the oxygen in the room like her very life depended on it. No matter how much molly she dances with, she will never quite shake that mugging, "hiya folks!" Disney-trained screen presence. She doesn't know how to cede the spotlight to the other performers on the bill, which is literally the job description of an emcee or host. I suspect MTV knew this even as they placed her front and center for every VMA promo they ran. But they had to get Miley in there somehow; she's been a reliable centerpiece of their past two VMAs, and after a year of relative radio silence (save for the occasional glitter-covered half-naked Instagram pic with Wayne Coyne) with no extant new music to promote or videos to throw moonmen at, there had to be some way to get her on screen.

More of a cool mom than a youth culture avatar

In that endeavor, at the very least, MTV and Miley were wildly successful. You know how sometimes you've got a refreshingly funny, appealing host on an awards show (your Tina Feys and Amy Poehlers, your Chris Rocks) and about halfway through the show you're like, "Hey, where'd so-and-so-go?" That was not a problem we had with Miley Cyrus at the VMAs. In a show where several major awards were given out on the red carpet, we somehow had time for an endless parade of unfunny skits with Snoop Dogg and Mike Will Made It, attention-starved costume changes, and pot jokes — lots and lots of pot jokes. (Miley is to black men as Taylor Swift is to other women — you can team up with her for a bit, but make no mistake, that bit will never be about anyone other than her.) In the end, with her raspy shout and her undying desperation to prove she was still edgy and crazy, Miley came off as more of a cool mom than a youth culture avatar. Her hosting persona, with its vaudevillian thirstiness and orchestrated nip slips, reminded me of Mama Bazoom from Showgirls, which should be a compliment but somehow is not.

The real death knell for Miley came after Kanye West's rousing, stream-of-consciousness acceptance speech for the Video Vanguard award. It was a speech that one-upped Fiona Apple's famous "this world is bullshit" 1997 VMA acceptance speech, and questioned the very concept of awards shows and MTV's motives in creating the kinds of moments the VMAs are known for. Kanye undercut himself by capping off the profoundly candid with the outrageous because that's just how Kanye operates, it still felt genuinely thrilling, an increasingly rare instance in which an outspoken, yes-kinda-stoned artist tried his best to speak to the giant machine we were all operating in, whether we were in the theater or on our couches struggling to come up with funny tweets. Up until the presidency thing, it was a pretty ego-less moment, as Kanye moments go.

The show could have ended after he dropped the mic. It had reached a peak that I don't think anyone was expecting when they first tuned into that evening's mostly dismal proceedings. But the first voice to cut through the roar of applause was Miley, wearing some kind of oversized sparkly coat, gushing about how crazy Kanye was, how much he made her laugh, as if he was a child or a YouTube star. I think she followed that up with another pot joke. Only someone completely blinded to anything outside herself can misread a moment to that degree.

She embarrassed herself on her own, but MTV gave her the stage

By the time Miley was shouting "yeah, I smoke pot" in her finale number as dozens of drag queens gyrated around her (another year, another minority group to glom onto and fill out your shell of a personal identity with!), she felt as irrelevant as the post-credits bumper for whatever scripted MTV show is on tonight that you've already forgotten the name of. And that's when I really started to wonder: had she been set up? Sure, she embarrassed herself all on her own, but she was given a tremendous stage on which to do so, and nobody seemed to be interested in stopping her from diving off.

But why would MTV do that to Miley? The better question is why wouldn't they. She's releasing unlistenable SoundCloud albums with Coyne without her label's cooperation. She's not going to be on the radio. MTV doesn't need anything from her. If they wanted to sacrifice a career live on air for the sake of ratings — or, if you want to give them that much credit, to make a point about white privilege — who more high profile and expendable than Miley? It's not even unprecedented: like Britney Spears before her, MTV made Miley, and at the VMAs they unmade her just as easily. And who knows, in four years, she could be our new Bieber, flying and crying and begging to be let back into the celebrity economy. That is, if the VMAs — or Miley's career — still exist.