Read next: The Sony Xperia Z5 and Z5 Compact review.

If Sony’s family of Xperia smartphones was a real human family it’d be a clan of unnervingly slick clones: practically identical apart from their size, and all sporting the same glossy smile. This year’s crop is no different, although the company is not only unveiling a new flagship and a new "pocket friendly" device (the 5.2-inch Xperia Z5 and 4.6-inch Xperia Z5 Compact respectively) but also a so-called "super flagship" — the imposing 5.5-inch Xperia Z5 Premium, which the company claims is the world’s first 4K smartphone.

Like previous years, the new Xperias feature the same, tried-and-tested design: glass on the front and back, and a rounded, bumper-like frame protecting the edges. There are small variations between the three, like a new frosted effect on the glass of the Z5’s back, but these are essentially the same Xperias you’ve seen before. Luckily for Sony the look still feels surprisingly fresh — an unintended benefit, perhaps, of the company's low smartphone sales.

The Xperia Z5 Compact will be available in white, black, yellow, and coral.

In terms of essential specs, the three Z5s are pretty similar. (The main differences are size, materials, and screen resolution.) There’s the same Snapdragon 810 64-bit processor powering each of them, with both the Z5 and Z5 Premium sporting 3GB of RAM while the smaller Compact gets 2GB. All three devices are dust-tight and waterproof with capless micro USB ports, offer up to 32GB of internal memory (expandable up to 200GB with microSD cards), and have enough battery to last for up two days' use, says Sony. 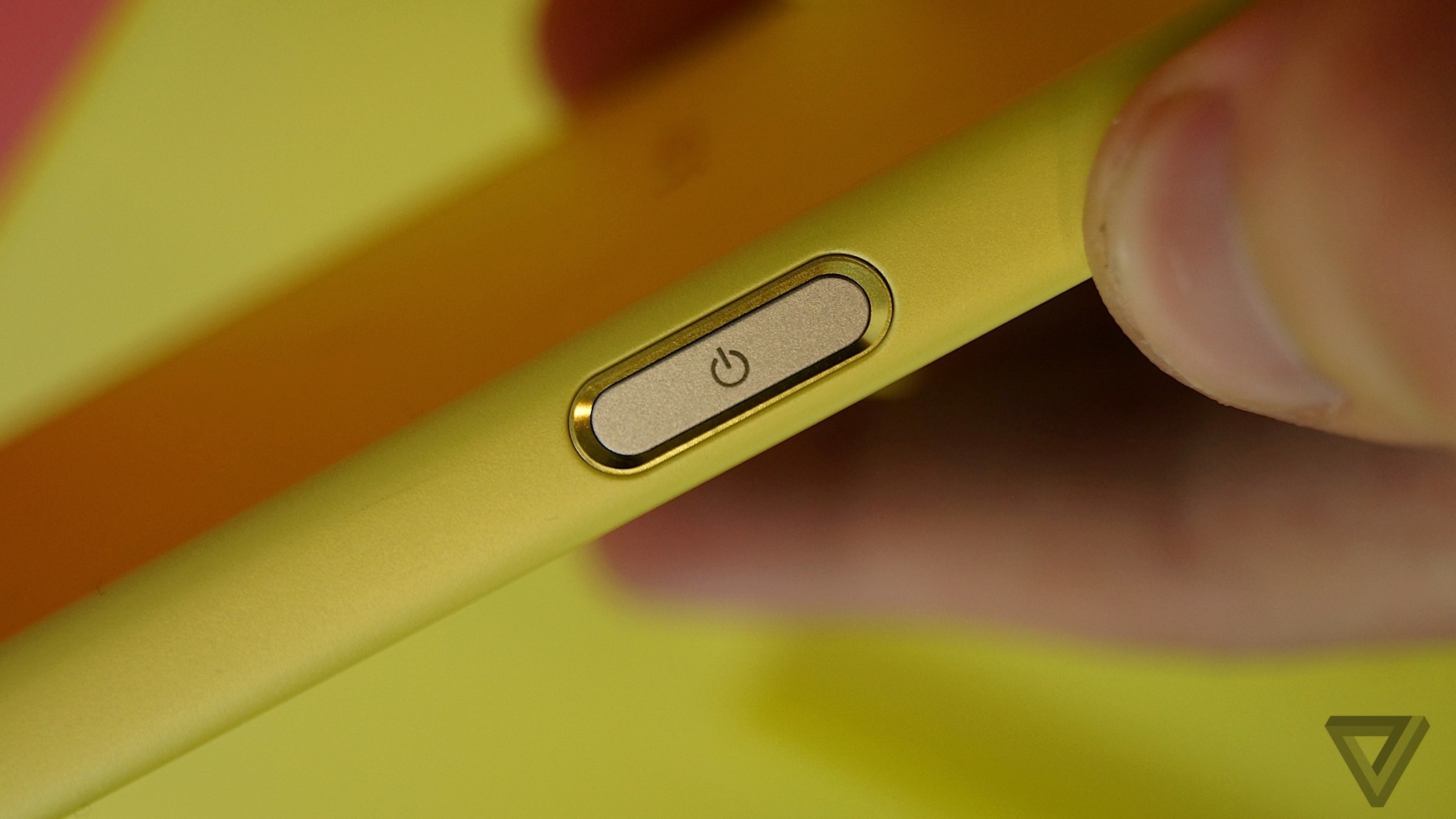 The Xperias' fingerprint sensor is built into a redesigned power button on the side of the devices.

The biggest addition besides a new 23-megapixel camera (more on which later) is a fingerprint sensor built into the phones’ power button. As with previous Xperias, this button is located on the right-hand side of the device, falling under right-handed users’ thumbs. But instead of a little metal nub, it’s now a slim oval flush with the side of the smartphone. Sony’s argument is that a side-mounted sensor is more convenient than Apple or Samsung’s front-facing solutions, and while the time saved is extremely small (how long does it take to move your thumb an inch or two?), Sony says it's worth it considering how frequently we unlock our phones. In our brief test the sensor was as responsive as you’d like and the placement was certainly handy, but it’s not a dramatic improvement over Sony's rivals.

Perhaps more importantly for the Z5s is Sony’s new camera, found in all three of the smartphones. The company is supremely confident about this 23-megapixel snapper, which incorporates the first new image sensor and camera module in the Xperia range since the Z1. It also boasts a hybrid autofocus that the company claims is the fastest in any smartphone (just 0.03 seconds) and a 5X zoom. Sony is promising that the camera will address all the traditional "pain points" of taking pictures on a smartphone (i.e. handling low light, quick focusing), and while it’s true that Xperia devices have an above-average photo quality for Android phones, we’ll have to wait for a full review to really judge its prowess.

The Xperia Z5 Premium will be available in chrome, black, and gold.
The Z5 Compact is loveable and functional
In terms of screen resolution, the Xperia Z5 Compact comes with a 720p display, the Z5 is full HD, and the Z5 Premium has that massive 4K screen. You can read more about this mammoth device in our separate hands-on, but we think the star of the show is the Xperia Z5 Compact. As we’ve found in previous years, the smallest Xperia is really the most satisfying. The build quality is remarkable, the colors lovable, and the 4.6-inch display is a delight, even novel, after years of larger and larger handsets. It also encapsulates Sony’s ability to produce incredibly functional devices. The side-mounted fingerprint sensor, the waterproof case, the two-day battery life, the super-fast camera — they’re all fantastic attributes, and packing them into such a small device feels satisfyingly practical.

The problem is, with rivals like Motorola offering comparably adept devices without the flashy design and accompanying price tag, can Sony convince customers it’s worth paying extra? We’ll be able to judge a little better once the company announces pricing, with the Z5 and Z5 Compact expected to be available globally from this October, and the Z5 Premium landing a little later in November.