The big European tech show known as IFA kicks off today and with it comes a deluge of new TVs. All will boast 4K resolutions while a few will support HDR.

Just don’t buy one. Not yet.

First of all, you’re unlikely to benefit from that 4K boost in resolution unless you’re sitting very close to the TV. How close? Bring on the Carlton Bale chart! 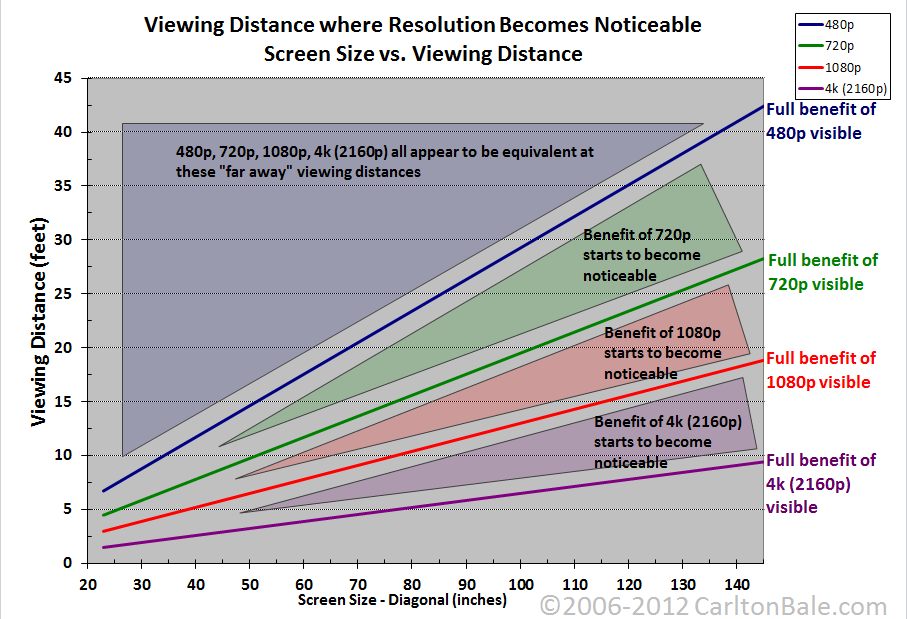 As you can see from the oft-cited image above, you’ll have to sit about 3 feet or closer from your 55-inch 4K TV to notice any improvement over 1080p. And 4K content is still very limited. Buying a 4K monitor to prop in front of your keyboard and Wacom is a no-brainer if you can afford it, but buying a big 4K TV is just dumb for the average 10 foot living room.

HDR is one very good reason to buy a 4K TV

There is, however, one very good reason to eventually buy a 4K TV: HDR. High Dynamic Range is the same technology you already use on your smartphone to restore clouds in photos with otherwise blown-out skies. Now it’s coming to televisions, but only at the very top end (you won’t find it on Vizio’s $850 55-inch 4K set, for example.)

HDR is legitimately desirable television tech. It’s brighter, more colorful, and offers more realistic contrast than anything you’ve seen before. You’ll definitely want it. Trouble is, if you buy one of those HDR-ready Sonys already on sale today for $4,000 (and up) you won’t able to find any HDR video to feed it.

Amazon began streaming a single title in HDR back in June with Netflix scheduled to offer its own limited selections any day now. Ultra HD Blu-ray media and the HDR players that support it should arrive before the year is done. As a result, HDR titles will be extremely limited for many, many months if not years.

Look, we all want to buy electronics that are "future proof" — especially TVs that we’ll keep for a decade or more. But now is not the time to do that. CNET, Wired, and the Wall Street Journal all agree.
4K is inevitable. By 2016 it’ll dominate purchasing options above 50 inches. But your next TV decision shouldn’t be about more pixels — it should be about better pixels.
Wait for HDR, it’ll be worth it.

Five stories to start your day

Bug of the day