The portable Rise aims to bring digital flexibility to the piano

It’s perhaps unsurprising given the name, but the Seaboard digital keyboard was inspired by waves. Roland Lamb, the device’s creator, says he was sketching wave patterns and noticed how they managed to be both continuous and separated into discrete sections — the peaks and troughs. He wondered if he could create a piano that worked like this. One that allowed musicians to play individual notes, but also explore the spaces between them.

The result of Lamb’s work is a digital keyboard that looks quite ordinary until you get close and realize that there are no separate keys. Instead, the whole keyboard functions as a single pressure-sensitive interface. You can play it normally like a piano, but you can also bend the pitch of any individual note by wiggling the soft, rubbery keys from side to side, or create sliding glissando effects by running your hands up and down the silicone surface. Lamb’s company Roli first introduced these concepts with the 61-key $2,999 Seaboard Grand in 2013, and now, it wants to democratize them with the 25-key $799 Seaboard Rise — a smaller, cheaper, and even more responsive device.

"A living musical instrument is 10 percent physical, 90 percent cultural," Lamb tells me when I visit Roli’s London headquarters to see the Grand and Rise. "Say you go to a museum and see some old instrument, but nobody knows how to play it or what the music was like that was made with it. Then it’s just a dead object." Instruments, says Lamb, are "the most physically intelligent tools" we have. "There are people who are really good with a hammer or knife, but their level of virtuosity [is nothing] compared with playing, say, a violin — the number of years of skill and practice that go into that."

there are five dimensions of toucH: strike, pressure, glide, slide, and lift
With this in mind, Roli has attempted to make the Seaboard as accessible as possible, giving people what Lamb calls "a depth of expression" as soon as their fingers hit the keys. This means effortless scales and vibrato with those sliding and wiggling motions, but also a sensor that responds to how quickly a finger hits or leaves a key (the "strike" and "lift" respectively). This information can be translated into subtle but suggestive signs of an instrument’s physicality, such as the twang and slap of a plucked double bass, or the reedy quiver of a softly played saxophone. It’s not that these effect have been impossible to imitate before now, but the ease with which the Seaboard produces them is noteworthy. "You don’t have to learn how the controls work, you just play, and learn as you play," says Lamb. 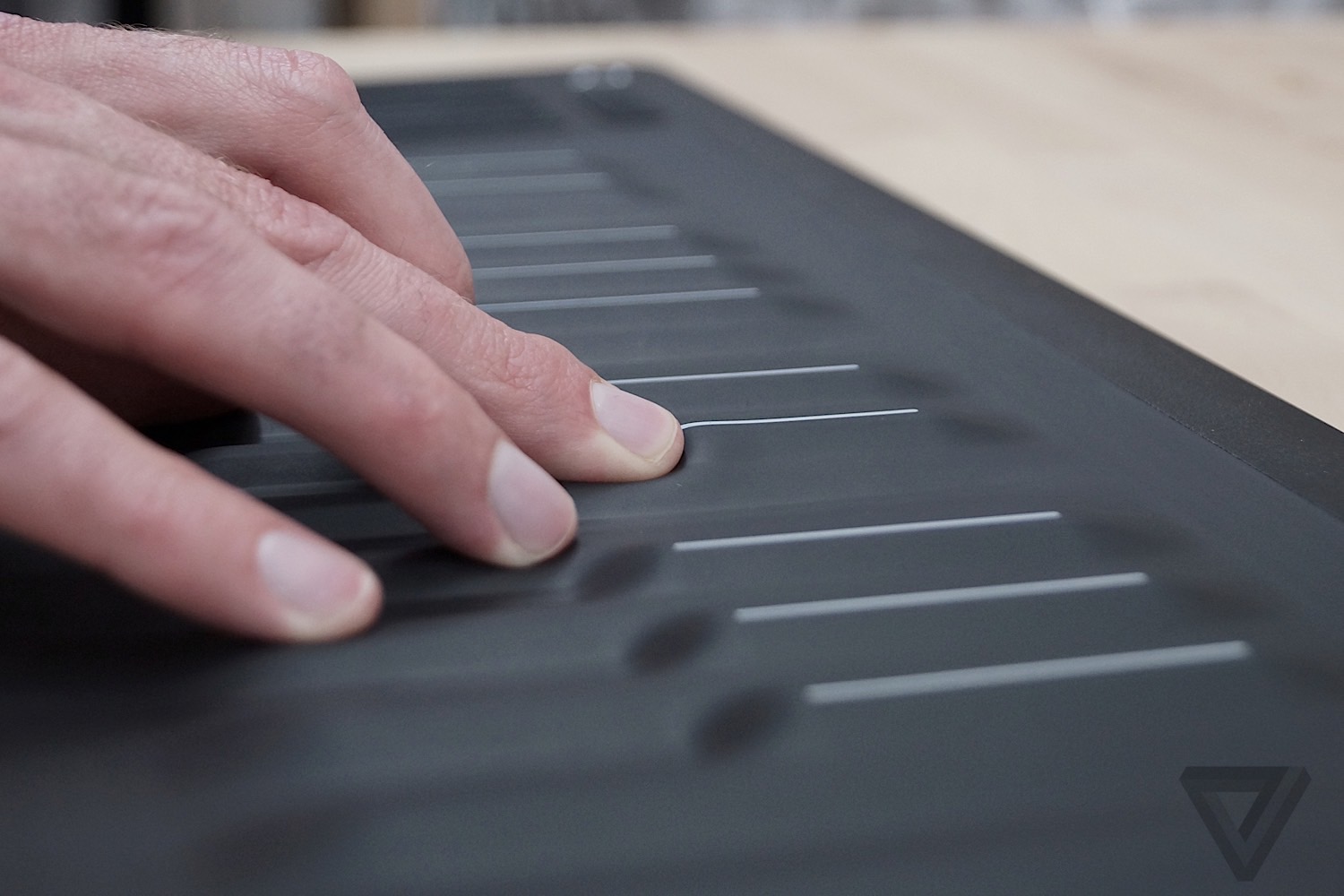 The Seaboard's keys are soft and squishy.

This assessment is a bit generous. The Seaboard might be intuitive, but it doesn’t mean there isn’t a learning curve. I spent about hour playing with and listening to both the Grand and the Rise, and I only just felt I was beginning to get a grip on the mechanics of the Seaboard by the time I had to leave. I have the advantage (or disadvantage — Roli’s engineers said it can go either way) of having played the piano for nearly a decade, and using the Seaboard for the first time felt like stepping off solid ground into quicksand. It’s hard to stress how alien something can feel that’s a familiar shape and size but the consistency of a foam mattress. It’s like reaching for your smartphone in the morning but finding you’ve picked up a rather convincing dog toy instead.

With a normal piano you only have to worry about how loud or quiet the notes are, after that it’s just a matter of pressing them in the right order at the right time. With the Seaboard, you have to think about not only how hard you press the keys, but how hard you unpress them; how much you wiggle them, how far slide your fingers up them, and whether you want to incorporate glissandos at all. And this is before you even start to fiddle with the different parameters — adjusting how sensitive each of these responses are. Roli recommends using it like a normal piano to begin with, slowly adding extra dimensions of touch as you go along.

Once it’s been mastered though, it’s an amazingly adaptable instrument. An expert playing a Seaboard reminds you of someone kneading dough or shaping clay. Their hands dig rhythmically into the keys, molding the sound. Roli’s product manager Manon Dave describes the process as "reaching into the note through pressure," with the initial touch only giving "the top of the sound" before the keyboardist explores the audio in three dimensions. Once you know that depth is there though, it can be a delightful experience. I spent a lot of my time with the Seaboard laughing — the process of using it is just so surprising.

Lamb says the Seaboard mixes the expressiveness of an acoustic instrument with the adaptability of a digital one. That’s how he came to settle on its design, creating an interface that is both continuous and discrete, allowing individual notes to be sounded as well as the whole harmonic spectrum. The smaller Rise is even more flexible than the Grand, not just in terms of portability, but with additional built-in faders for tweaking various settings (like making notes fade in rather than play immediately, for example) and letting performers switch between instruments and effects on the fly. Roli hopes the Rise will become part of producers and artists’ regular workflow, adding depth and feeling to melodies with more control and less effort, as well as being a tool for live performances.

The larger Seaboard Grand, with the Rise in the background.

That’s the dream, but as Lamb readily admits, these things take time. In his opinion, the current world of music making is "problematic if not broken," with people failing to properly address the need for versatile digital instruments. Roli isn't the only company concerned with this problem — there a number of other, similar projects such as Antiphon’s Instrument 1 and the Eigenharp — but it does have the advantage of familiarity. Even if you’re not a pianist, the layout of a piano is instantly recognizable to most people. But while cheap processing power has made all these different creations possible, it’s too early to say whether any of them will take root in any meaningful sense. Roli points to artists like Hans Zimmer and Jamie xx who have composed and performed with the Seaboard as proof of its success (with the Grand, that is, not the Rise; the latter hasn't been out long enough), but it’s hard to quantify something like the success of an instrument. As Lamb says, it’s 90 percent culture.

"While I was doing my PhD and researching the topic I read one of the early reviews of the pianoforte," Lamb tells towards the end of our interview. "The guy was like ‘It’s too difficult to play. No one’s ever going to use this thing. It doesn’t make sense. You can’t control it.’ And people have said that about the Seaboard and really, I think it’s just a matter of time."