For the first time, Facebook has collaborated with its Oculus division to bring a taste of virtual reality to the core product. Today the company is bringing 360-degree videos to the News Feed, a move that could introduce the format’s immersive short films and animations to their largest audience yet. The videos, which are debuting on Android and the web, allow you to change the field of view by tapping the screen or moving your phone in space. And they offer some tantalizing hints about how Facebook plans to evolve the News Feed into something more than two-dimensional. 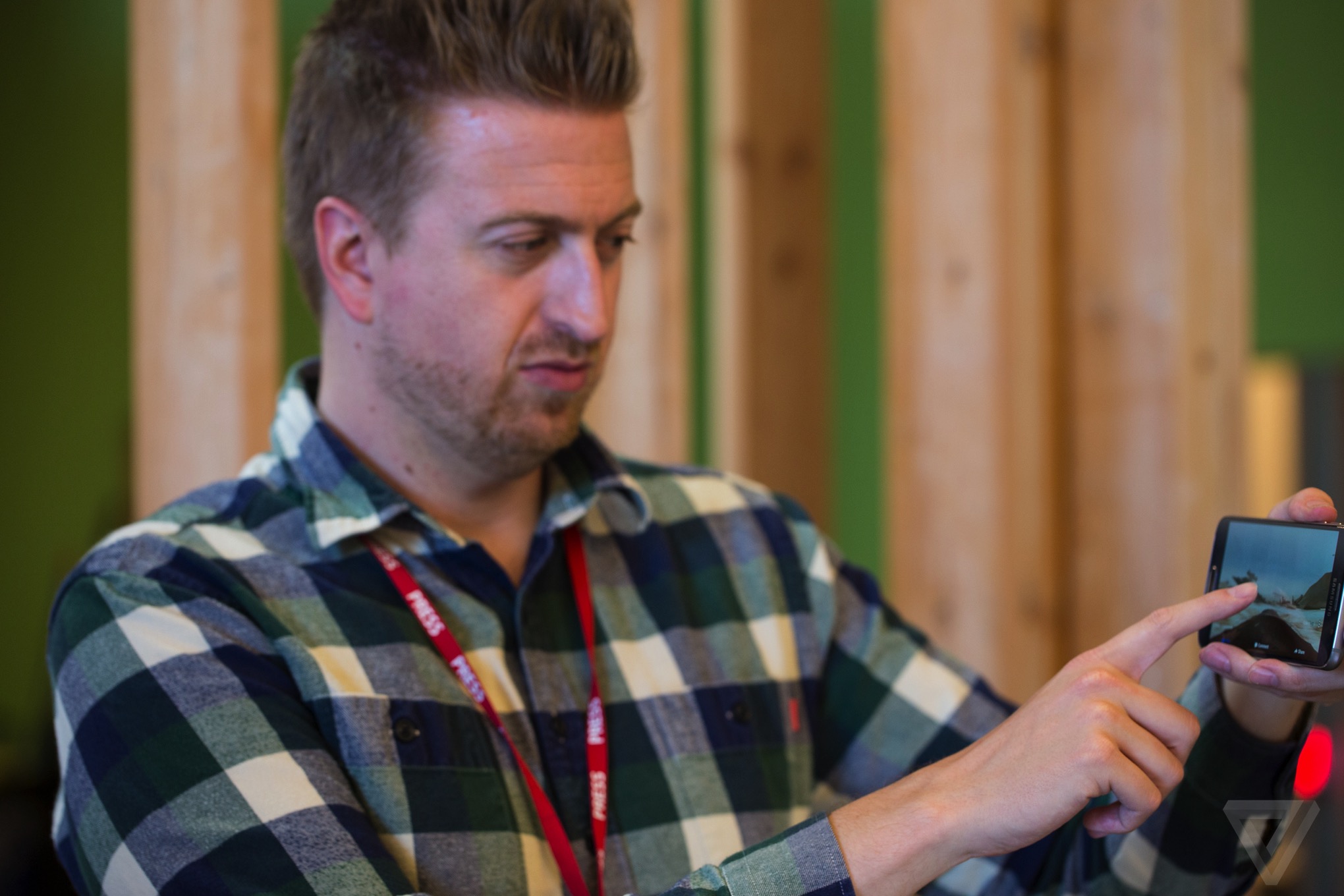 To start with, you’ll see videos from Star Wars, GoPro, VICE, LeBron James, The Discovery Channel, and Saturday Night Live, among others. VICE did an on-the-ground shoot in Afghanistan; James’ video showcases his workouts. SNL partly filmed its recent 40th anniversary in 360-degree video, and is highlighting a clip that features Jimmy Fallon and Justin Timberlake. Anyone can publish one of the videos starting today. (You won’t see any of them on iOS, though — at least, not yet.)

On Tuesday, I visited Facebook’s campus to see how 360-degree videos look on Facebook. On the web, they’re just fine — you click around to shift your perspective; it feels like using Google Maps’ Street View feature inside a video. But on mobile, the videos feel much more alive: using the phone’s gyroscope, Facebook tracks your relative position inside the video. This is a lot of fun with the Star Wars demo, which builds on footage from the recent trailer showing a landspeeder zooming across the desert. Spin in a circle, as I did a few times while watching the demo, and the desert spins right around with you.

Spin and the desert spins right around with you

Facebook is not the first big company to offer a home for 360-degree video. YouTube rolled out its version in March, and it works much the same as Facebook’s: tap a video, turn your phone sideways, and explore the content. (I particularly recommend doing this on YouTube if you have an iPhone and are curious what Facebook’s 360-degree videos look like. They look like that!) And YouTube isn’t alone: Kolor, a maker of 360-degree video software owned by GoPro, makes a player for desktops and mobile devices and hosts a public gallery for viewing the format in VR or on the phone. 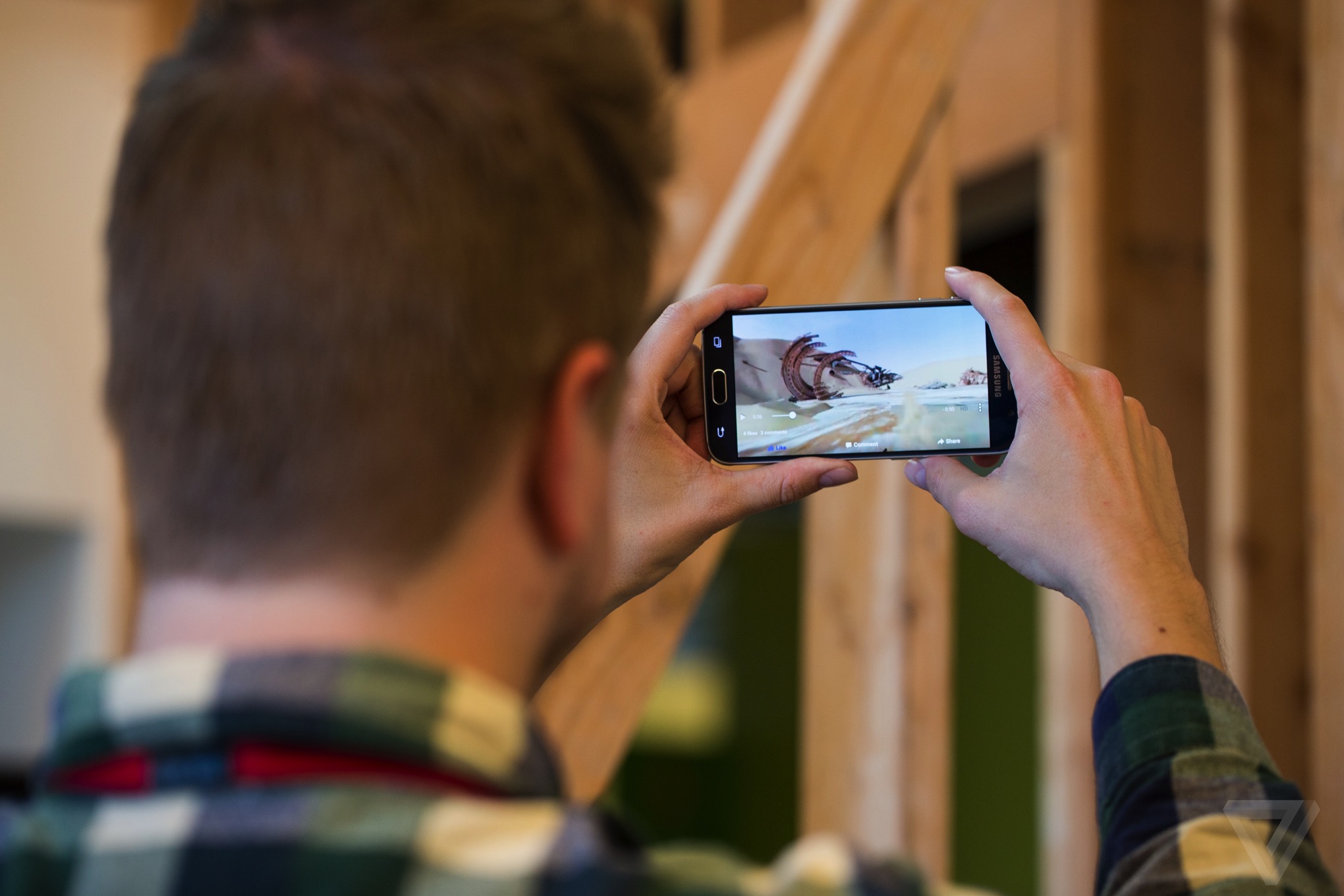 But in both of those cases, you would probably only see those videos if you first thought to search for them. Facebook’s News Feed is used by upwards of 1 billion people every month, representing 360-video’s best chance so far to reach a large audience and break through to the mainstream.

Perhaps that’s why, as I meet with members of the Facebook team, they speak of 360-degree video with outsized enthusiasm. "There are certain things that, when you hold them in your hands for the first time, they attract a crowd," says Chris Cox, Facebook’s chief product officer. "People come to tell you they just saw it, and you have to see it. There aren’t that many of those. This is one of them."

Will Cathcart, a director of product management, says the videos represent the next logical step for the News Feed. Text led to photos, which led to video, which led to autoplay video. "Over time we’ve seen the modes of sharing shift to become more mobile, and more immersive," he says. "Here what we’ve done is look at all the really cool 360-degree video content people are creating and think through, what’s the right way to bring that experience to News Feed."

Though Facebook led the project, the team worked closely with its colleagues at Oculus, which is grappling with similar issues as it develops its virtual reality platform. "Facebook and Oculus are sharing," Cox says. "The team that’s working on this, the team that’s working on this stuff in VR, is very fluid in terms of the engineers, the product managers, the designers, sharing backgrounds and skill sets. It’s been a very positive collaboration." And are more collaborations coming? "We hope so," he says.

Speed across the Jakku desert from Star Wars: The Force Awakens with this immersive 360 experience created exclusively for Facebook.

That’s not to say the next step is a full-fledged virtual reality version of Facebook, though Cox has previously said the company is building VR versions of its apps. But when viewed on a headset like the Oculus Rift, these videos can at least approximate VR. And even when viewed on a phone or the web, 360-degree video is like VR in at least one way: both illustrate how products are evolving to let us share more of our experiences with one another, thanks to technology that is richer with information and uses more of our senses.

If you’ve shot a 360-degree video — and please let’s come up with a nickname for these, I’m already tired of typing it — you can upload it to Facebook in standard formats. For now, most of your options for shooting in the format are expensive; the Bublcam, one of the more affordable options, costs $800. But cheaper options are on the way; Ricoh’s Theta S Digital Camera, which shoots what it calls "spherical panoramas," goes on sale October 23rd for $350.

VR is evolving fast enough that you can already imagine the day 360-degree video will look clunky: a relic of a time when there wasn’t a VR headset in most homes, and we had to click around SNL clips in the browser with mice. In the meantime, though, a lot of people are about to get their first taste of a slightly more virtual world.