Playing SPL-T feels like stepping back in time. It may be a game released in 2015 for your state-of-the-art iPhone, but it has the soul of some long-forgotten Gameboy game, a dusty cartridge tucked away in a retro Japanese gaming shop. It's also a game that I can't stop playing. 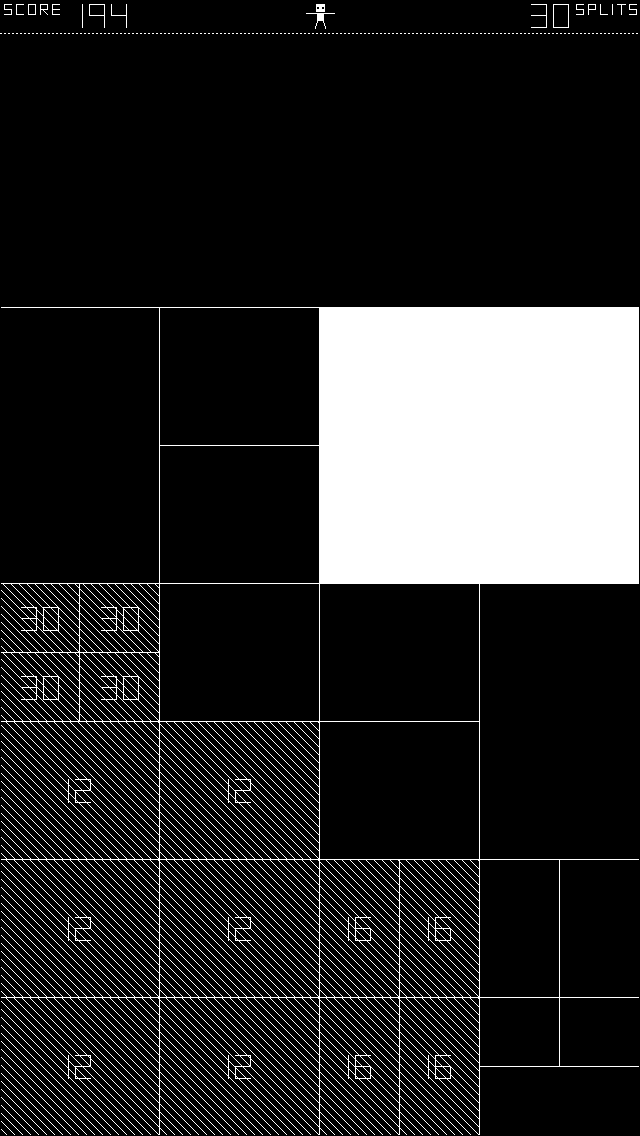 SPL-T is inscrutable at first; even the instructions are confusing. As the title suggests, the black-and-white game is all about creating splits. You start with a blank screen, and tapping it will split it in half. You can then further split these two boxes, and the boxes they create, until they get too small and you run out of moves. The splits alternate between horizontal and vertical, and when you create four equally sized blocks all together, they'll earn you points and are cleared from the board. It's a game that seems more complicated on paper than it actually is, and it took me a few nights of playing before I finally understood. And even now that I get it, I'm still figuring out new techniques that get me higher scores. I can feel myself getting better. That in turn only makes me want to play more, because a top score, or a breakthrough technique, could be just one turn away.

In addition to the absorbing gameplay, SPL-T also has a wonderful, low-fi sense of style. The visuals are sparse but charming, highlighted by a little man at the top of the screen who poses so you know whether your next turn will be horizontal or vertical. The little bleeps when you touch the screen are immensely satisfying, and the menu music is so good that I wouldn't mind having a copy of the soundtrack. These elements work together to really drive home the retro feel.

"We designed SPL-T to be a puzzle that would last forever."

Perhaps the most surprising thing about the game is its developer. SPL-T was made by Simogo, the two-person Swedish game studio best know for narrative experiments like the horror adventure Year Walk (which was recently ported to the Wii U) and the serene short-story collection The Sailor's Dream. The developer released the game as a complete surprise this week — they didn't announce it until it was already on the App Store. "We know that it doesn't look like much," the studio says. "We're not trying to sell you this thing with promises of rewards, stories, or grand art. We designed SPL-T to be a puzzle that would last forever, and never go out of style."

You can check it out for yourself right here.