Motorola’s idea for smartwatches has been that they shouldn’t be ugly, they shouldn’t look like a computer, and they should have an identity. Even a casual observer can identify a Rolex just by its design — there’s no reason that a Motorola watch shouldn’t have the same kind of recognition. Further, a smartwatch should be able to dress up or dress down, and it should be a familiar thing to its wearer. And Motorola feels that it should be round, since that’s what the vast majority of traditional watches are.

The company’s first attempt at making a smartwatch under this mission was last year’s Moto 360. It was the first modern smartwatch to have a round face, and it looked far more attractive than anything that came before it. Other companies quickly followed suit with round watches of their own, but few matched the Moto 360’s appeal or distinctive design identity.

But the first Moto 360 wasn’t without faults: it was too big for many normal-sized wrists, its screen wasn’t as nice as those on other watches, and battery life was less than reliable or dependable. It was a smartwatch you wanted to love, but just couldn’t quite get there.

Now Motorola has launched a successor, which was built to right many of the original’s wrongs, while preserving Motorola’s overall aesthetic. The new Moto 360 comes in multiple sizes, has greatly improved battery life, and a refined design that makes it more comfortable to wear. It also comes with a higher price tag: it starts at $299 and goes all the way up to $429, a far cry from the $249 the original launched at. Oh yeah, it’s also still round and can now work with both Android smartphones and the iPhone.

Motorola has essentially doubled down on what it thinks a smartwatch should be. Is it making the right bet? 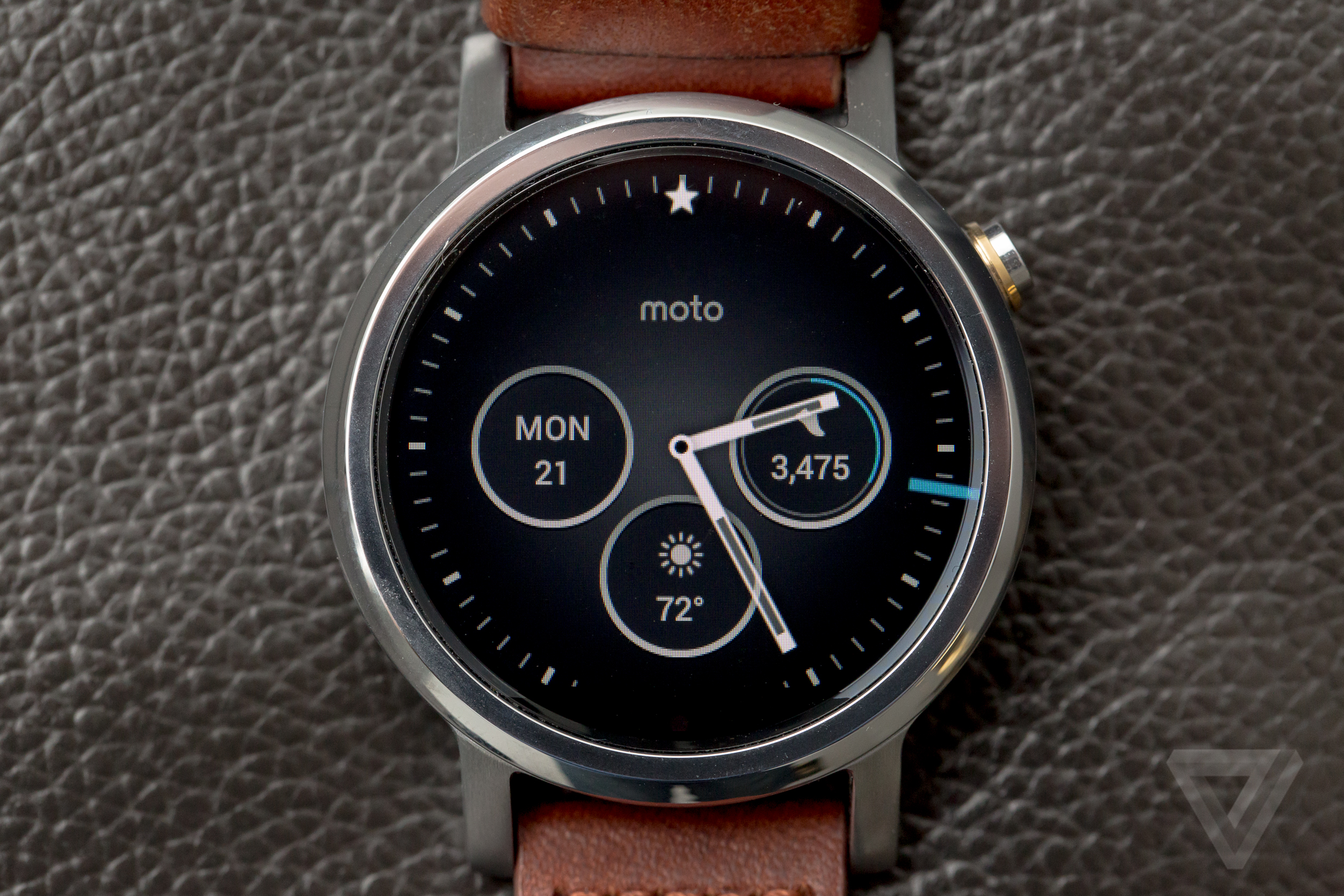 The biggest and most obvious change from last year’s Moto 360 to this year’s is that it’s no longer a one-size-fits-all experience. This time around, you can get the watch in small or large, men’s or women’s, and with a variety of different bands or straps. In addition to size, you can choose your color, strap, and bezel finish. All told, Motorola says there are 300 different combinations available through its Moto Maker website, making the Moto 360 one of the most customizable smartwatches you can buy. 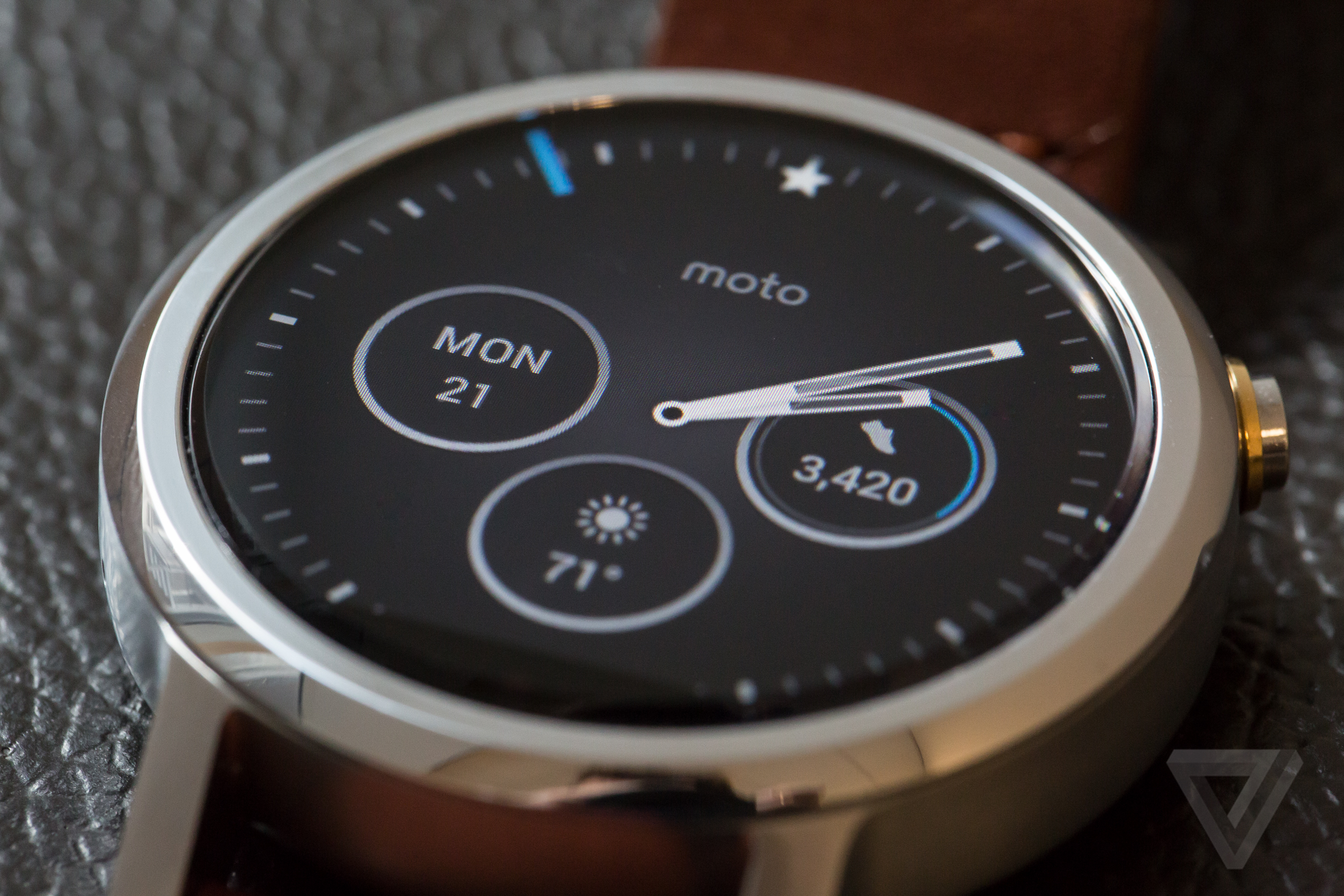 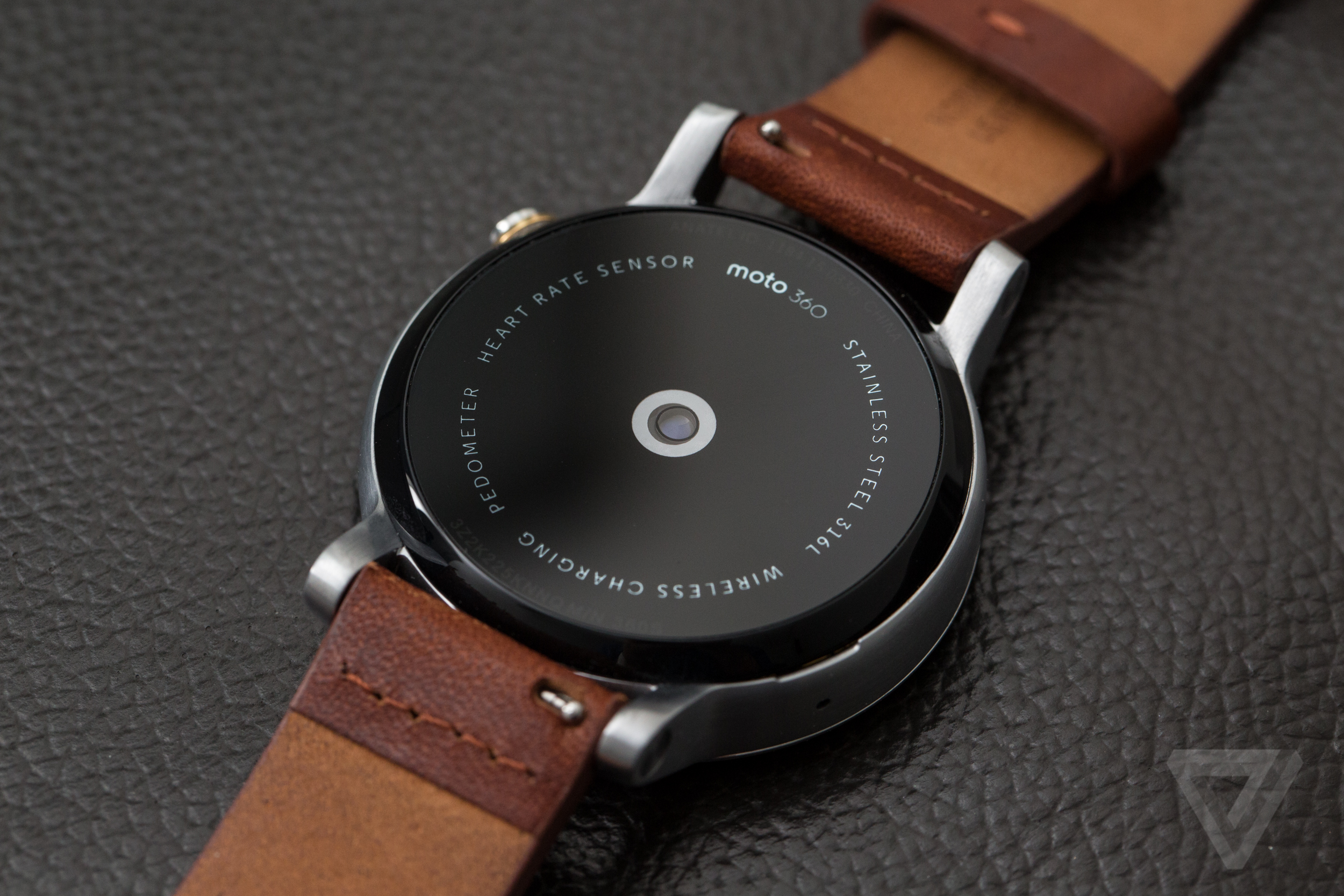 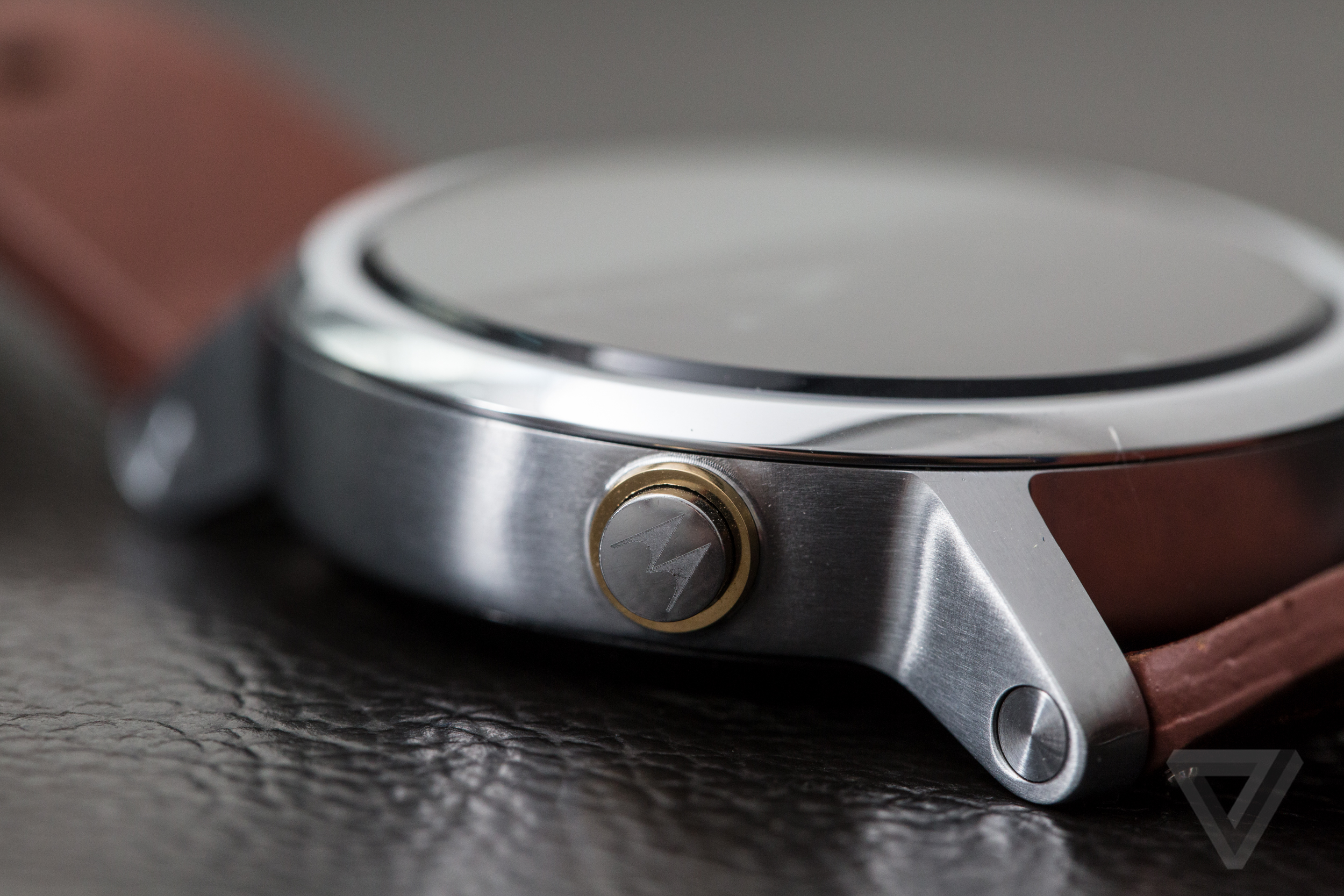 The new size options are a big deal — the Moto 360 finally has an option that’s reasonable for people with smaller wrists. I’ve been wearing the smaller men’s version, which has a 42mm diameter instead of the 46mm the larger size takes up (the larger version is the same size as last year’s watch). The women’s model is only available with a 42mm face, but uses a narrower band than the men’s version. For me, the smaller size is much more comfortable to wear on my average-sized wrists. It’s better proportioned and looks much more like the analog watches I prefer than any other smartwatch.

The new size options are a big deal

Part of that is thanks to the new strap mounts (or lugs, in watchmaker’s parlance), which are now on the outside of the watch body instead of underneath. They make the watch sit nicer on the wrist and make it much easier to swap out bands. Motorola’s included bands also have quick release pins, further increasing the likelihood you’ll try a different look every once in awhile. But there's no denying that the new Moto 360 is still a thick watch, and it's not as svelte as the Apple Watch or Pebble Time.

My colleague Lauren Goode wore the women’s model with rose gold bezel for a few days (it’s $30 extra for a matching rose gold case, so this particular model comes to $329) and her impressions of the updated design weren’t as positive as mine. Though she’s fond of the overall look of the Moto 360, the new watch didn’t sit on her thinner wrists as comfortably as the men’s model fit mine. Worse, the gold finish and thinner band also came off as slightly cheap to her, whereas the brushed stainless finish and brown leather strap on my unit is handsome to my eyes. If anything, our disagreements demonstrate just how personal a watch is, and how important it is for smartwatch makers to nail the design. 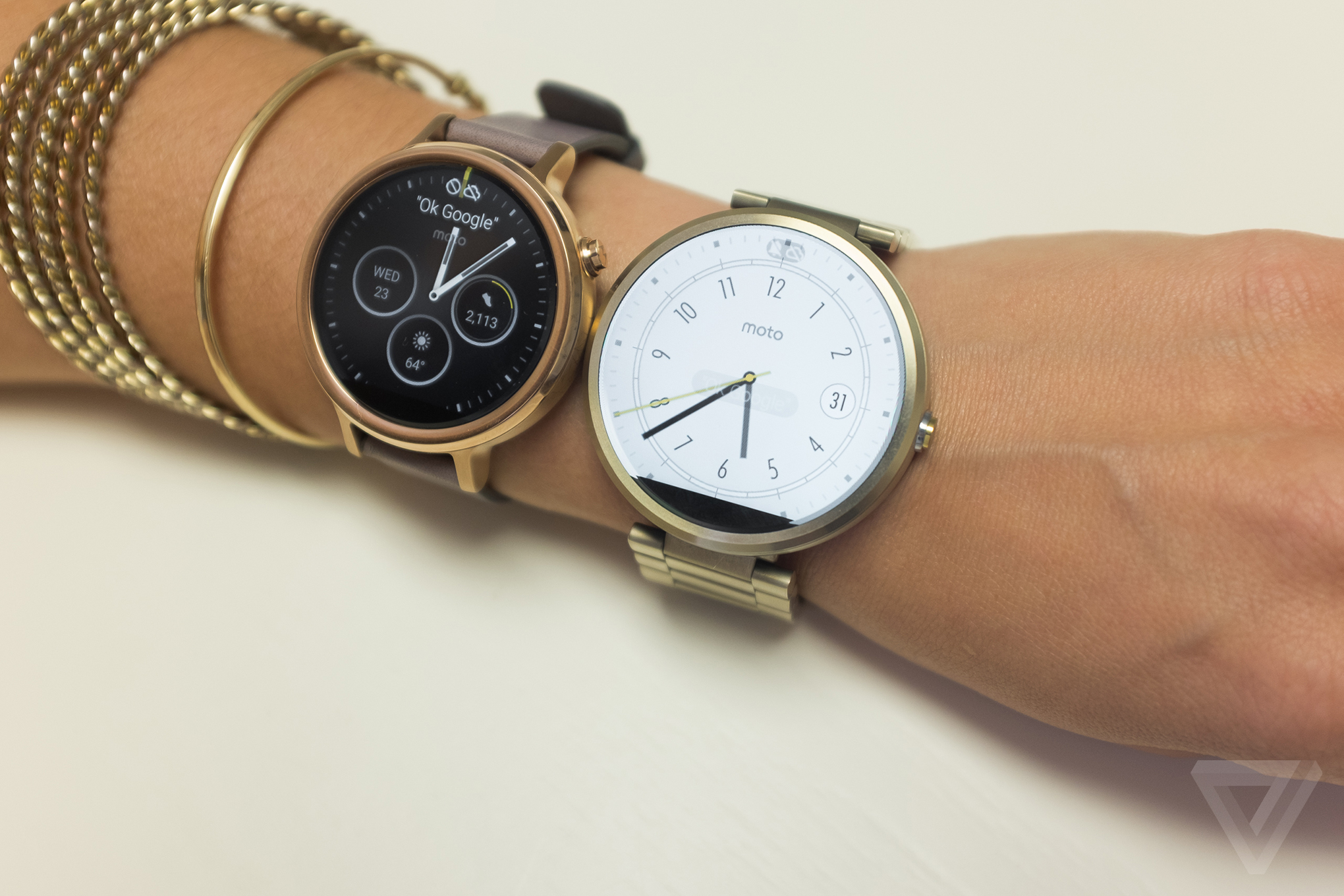 Despite the discrepancies between the men’s and women’s models, all of the design changes align with Motorola’s mission to make a smartwatch that’s distinct, yet familiar, attractive, yet functional. They also have the side benefit of making it a much more comfortable and easier to wear watch. It’s a watch I can wear everyday without embarrassment, though it seems that while Motorola did a great job at designing a great men’s smartwatch, it’s been less effective at making the Moto 360 more attractive to women. 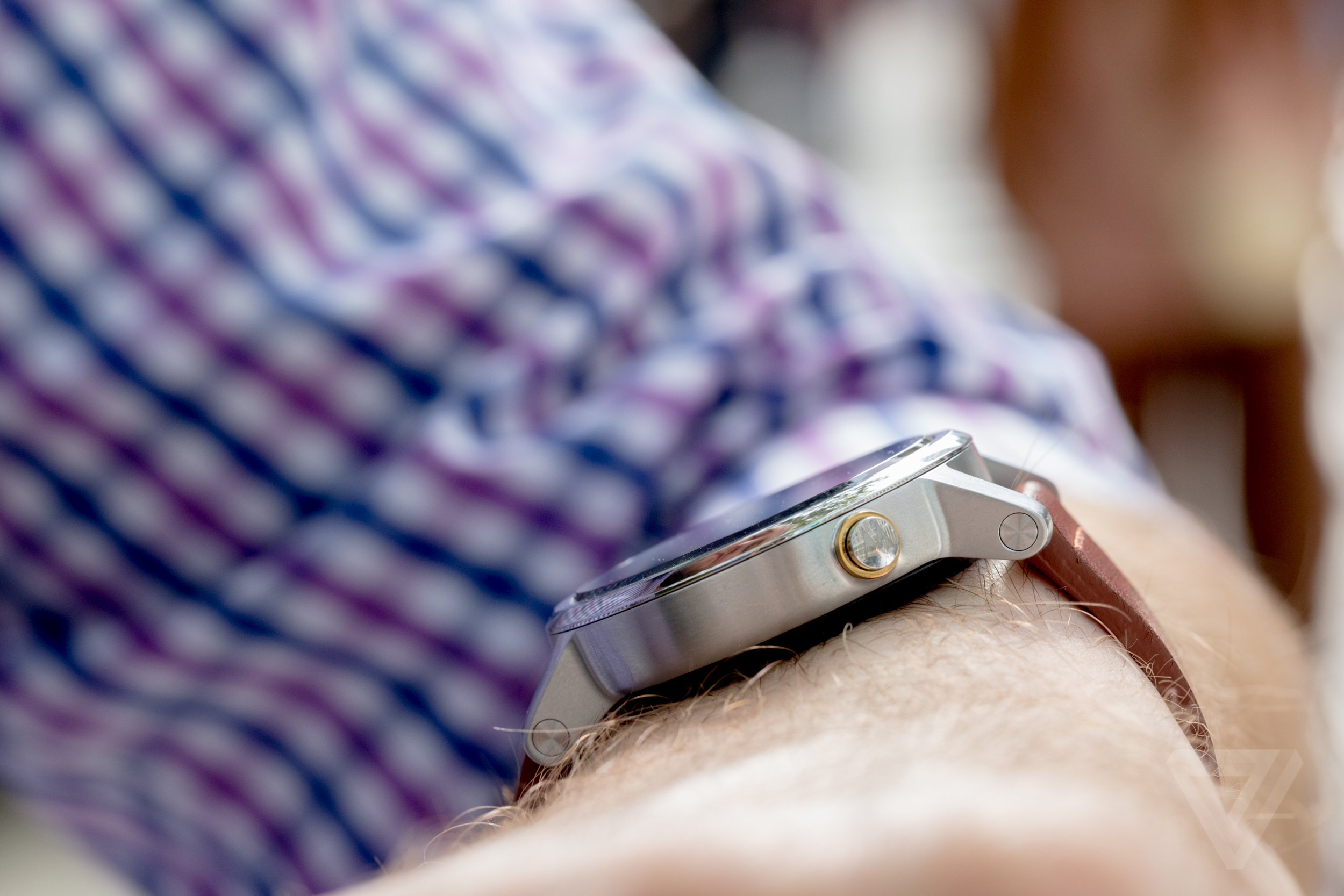 Whether I want to wear it every day or not hinges heavily on its functionality, however. Last year’s watch was hampered by sluggish performance and unreliable battery life, which made wearing it more of a chore than a pleasant experience. Fortunately, Motorola upgraded the processor this go around, which improves both performance and stamina. The new Moto 360 is much more responsive and less frustrating to use than the prior model, responding to taps and voice commands easier than before. 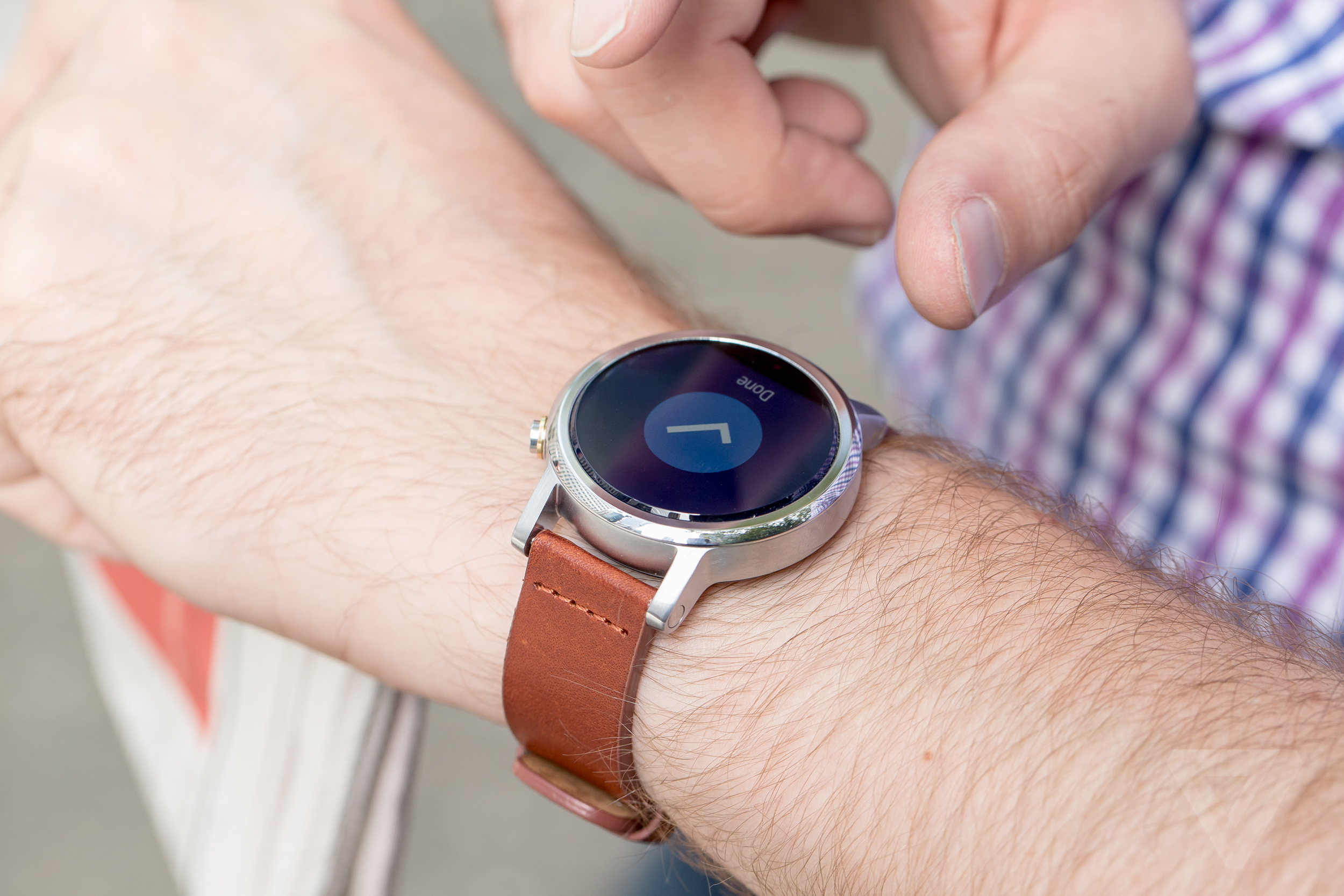 I’ve also had no issues with it lasting an entire day away from its wireless charger. I’ve even been able to keep the ambient display mode on all day, which makes it much easier to quickly glance at the time, and still have 30 percent or more battery when I go to bed. It still requires me to charge it every night, but that’s far better than dying before my day is even over. Motorola says the larger model will last even longer between charges — up to two days, even — but I have not been able to test it yet.

The new Moto 360 is less frustrating to use than before

The display has slightly more pixels than last year, and combined with the smaller face size on my unit, looks noticeably sharper. It’s still an LCD, and not as impressive as the screens on the Apple Watch, Huawei Watch, or LG Watch Urbane, but it’s readable outdoors and isn’t as jagged as it used to be. There’s that flat spot below the display, which a lot of people have issues with, but I don’t. Motorola insists that it's necessary to make its design philosophy (big screen, small bezels) work, and it’s a trade-off I’m willing to make. It’s also worth noting how useful automatic brightness settings on a smartwatch are, which are enabled by the ambient light sensor embedded in that flat spot. 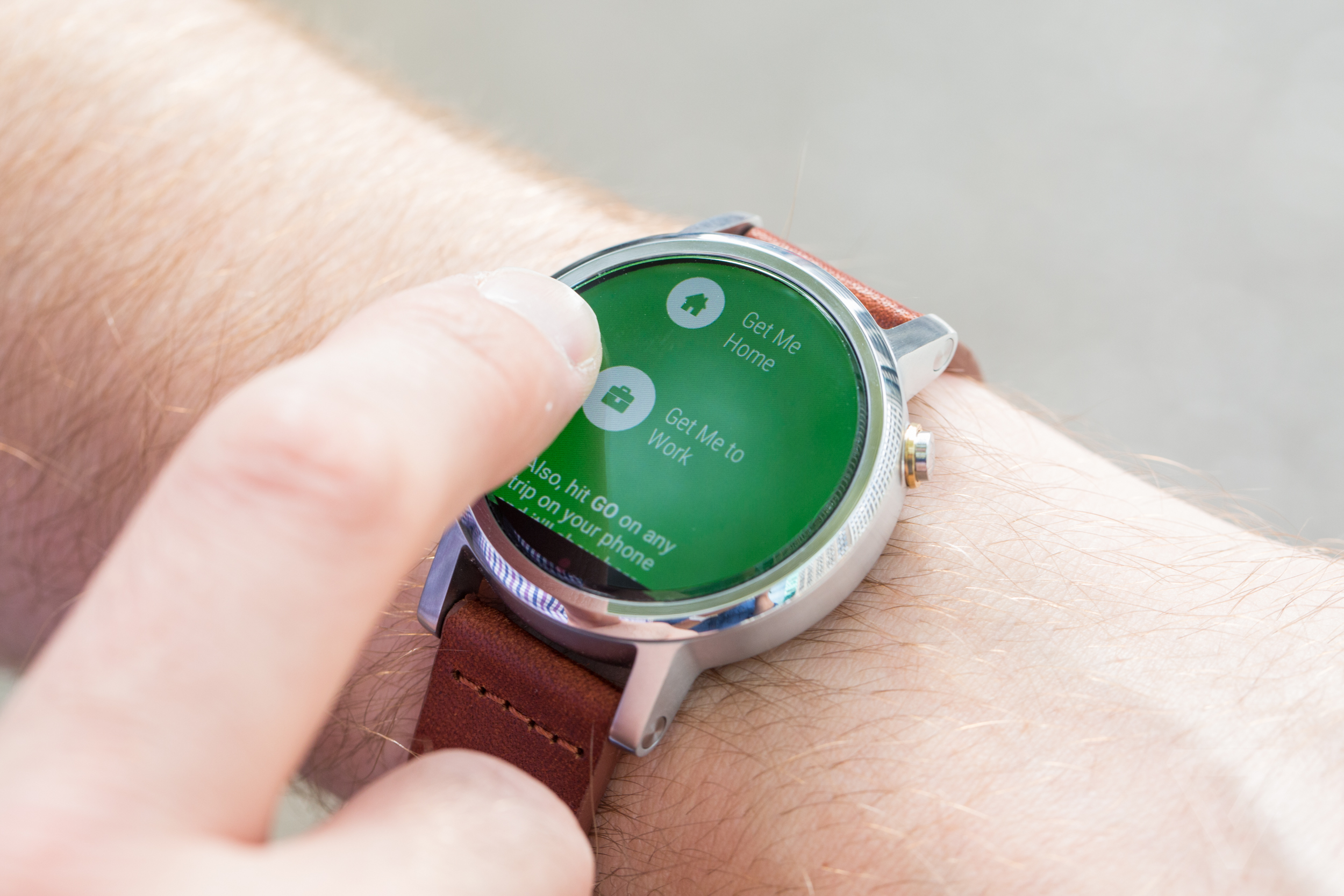 One thing that hasn’t changed is that the Moto 360 still runs Android Wear, Google’s smartwatch platform. Android Wear’s gotten incrementally better in the year or so since it launched, but like most smartwatch platforms, it still feels like a work in progress. It’s best at being a notification companion, letting you see what alerts are coming in without having to take your phone out of your pocket. You can also do a few things with your voice, such as send a message or perform a Google search, but Android Wear doesn’t have a great ecosystem of useful third-party apps, nor does it support mobile payments like the Apple Watch does. It often feels like it takes more taps and time to get where I want to with Android Wear, and odd things like the inability to clear all of my notifications in one step frequently leave me frustrated. System-level crashes are also frequent and frustrating to deal with.

For its part, Motorola designed a few new watch faces that get around some of Android Wear’s deficiencies. The new faces have tappable widgets that can display weather, step count, battery, day / date, and more. Tap one of the widgets and you can get more information such as a four-day forecast or agenda of your appointments. Mostly, I use them to just quickly glance at how many steps I’ve racked up or what the current temperature is, which is highly convenient and not something my analog watch is capable of. But all of these features have also been added to the older Moto 360 via software updates, making the new watch functionally no different than the old one (though it performs all of its functions better). 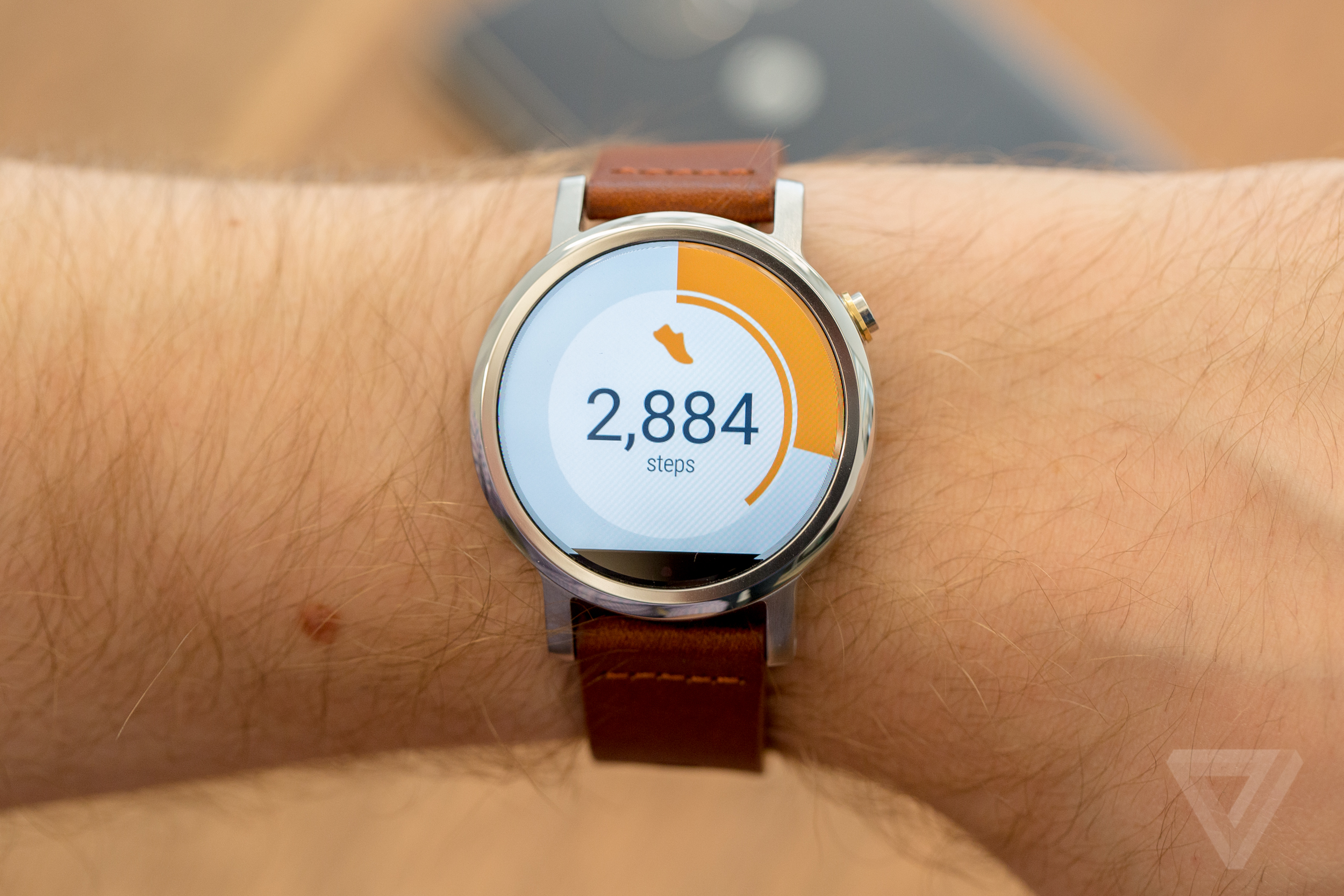 Motorola has also upgraded the fitness-tracking features in the Moto 360. It can count your steps, read your heart rate, and estimate your calorie burn. Motorola finally designed a smartphone companion app for the 360’s fitness tracking, so you can actually chart your progress without having to stare at a tiny watch screen. But the 360 still lags far behind the Apple Watch and other third-party apps when it comes to tracking workouts, making it largely a step counter and not a full fitness companion. Lauren found that the Moto 360 was not as well balanced and didn’t stay in place as well as the Apple Watch during workouts, further solidifying that it’s a poor choice for tracking intense activity.

The last major software bit of note with the Moto 360 is that you can now use it with an iPhone instead of just Android devices. (The original Moto 360 can also now work with an iPhone, provided it’s been updated to the latest Android Wear software with an Android phone first.) But if you’re an iPhone user, I wouldn’t really recommend the Moto 360 (or any Android Wear watch, for that matter). Functionality is severely limited compared to with an Android phone, and there are very few watch face options and zero third-party apps available. You also can’t respond to incoming messages from the watch like you can with Android. If you’re an iPhone user, the best smartwatch option remains the Apple Watch, and it should come as no surprise that something that runs Android Wear works best on the Android platform. 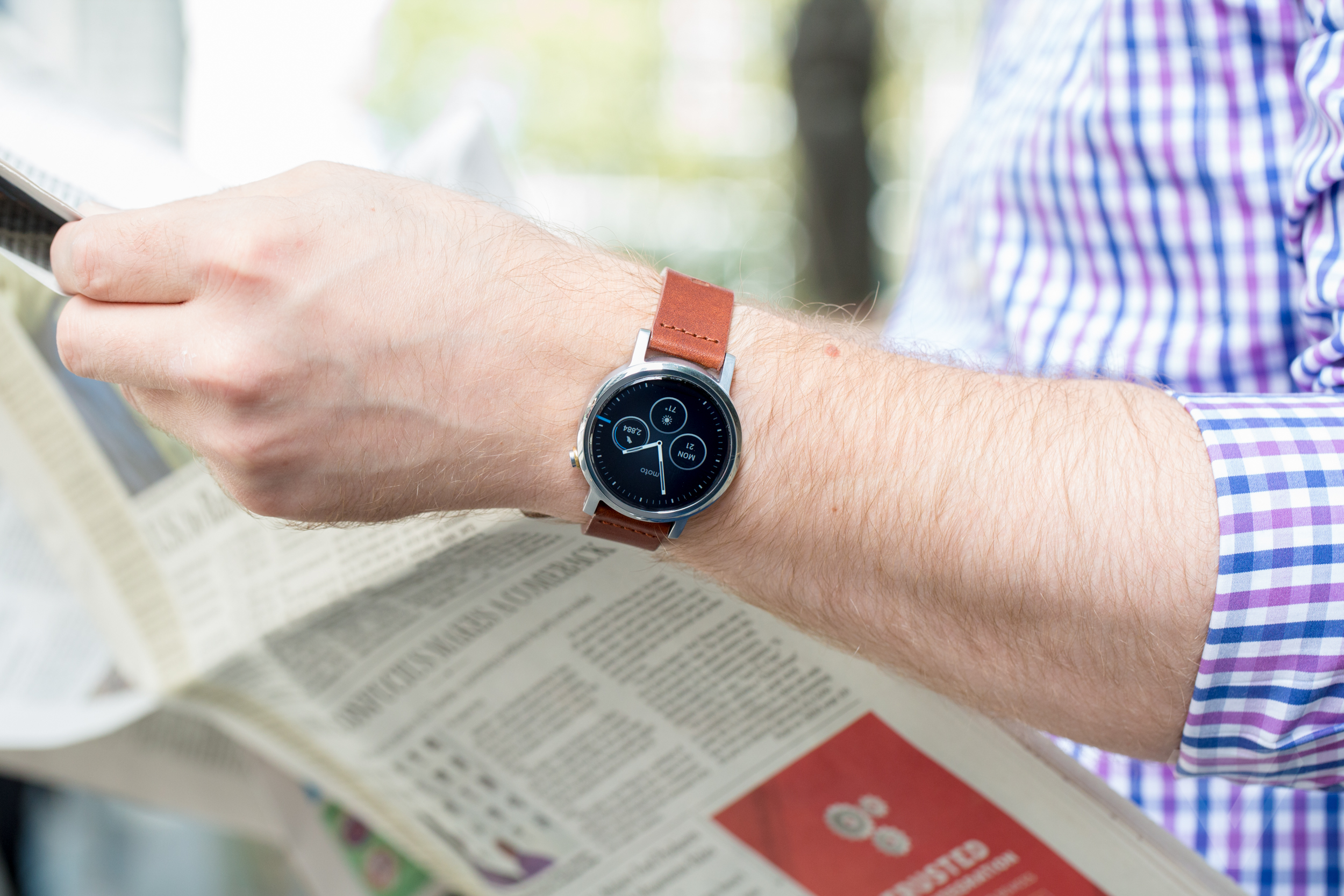 If you look at the first Moto 360 as a beta test (which is an apt description for the smartwatch market as a whole, to be frank), this year’s model feels like the version Motorola wanted to release last year. It’s a much better execution of Motorola’s philosophy on smartwatches, and it’s a much better performing device.

But, like any Android Wear smartwatch, Google’s software and decisions remain the determining factors as to whether or not the Moto 360 is useful in your life. If you decide that Android Wear works for you, and you’re a fan of the Moto 360’s design, like I am, then you need to get over the price, which is steeper than before and maybe a lot to ask for a watch with Android Wear’s capabilities. It’d be a foolish move to think that Motorola isn’t going to come out with another improved revision on the Moto 360 a year from now, making it harder to justify a large investment today. But if you’re smitten with the looks, you could make the case that your $300-or-more are going toward that.

On the plus side, if Google is able to keep improving Android Wear and adding to its capabilities, the Moto 360’s hardware won’t stand in the way. Android Wear is still a very new platform, and there’s lots of room for improvement if Google is willing to commit to it. The best way to look at is if you buy the Moto 360 smartwatch, you’re paying more for the watch than you are for the smart. That, ironically, doesn’t make it much different from any other watch purchase, which is perhaps what Motorola has been going for all along.

$299.99 at Motorola Store
Most Popular
From our sponsor
Advertiser Content From